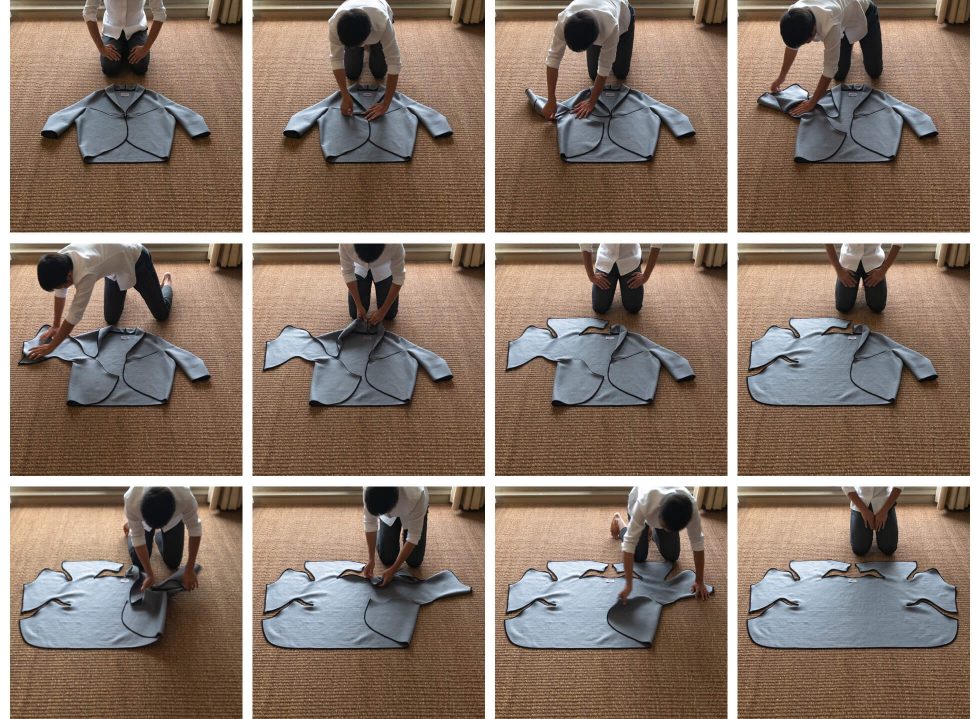 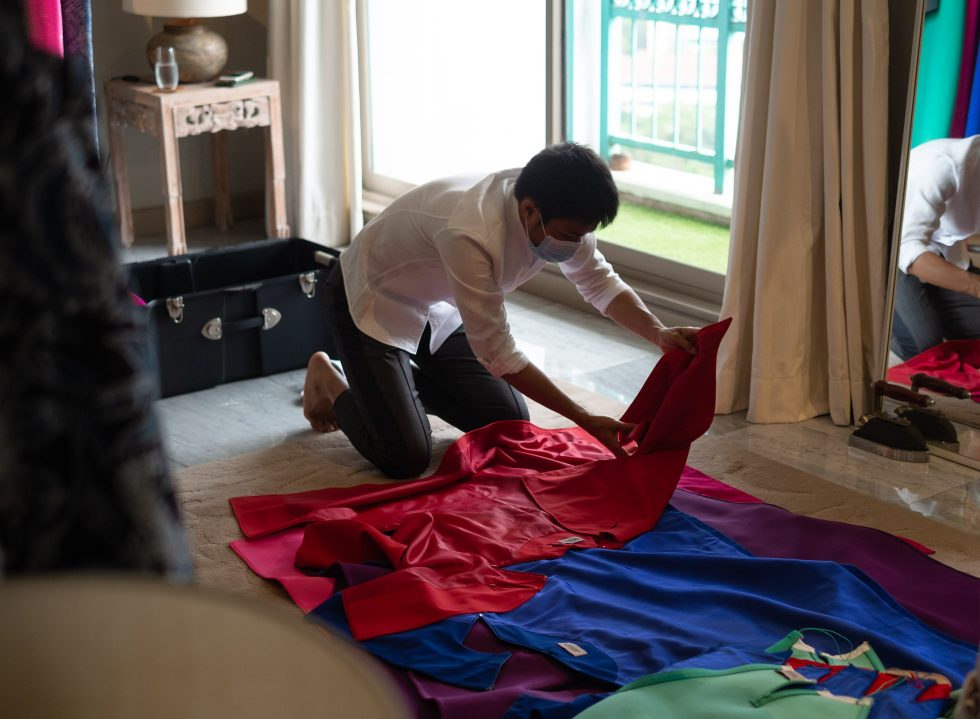 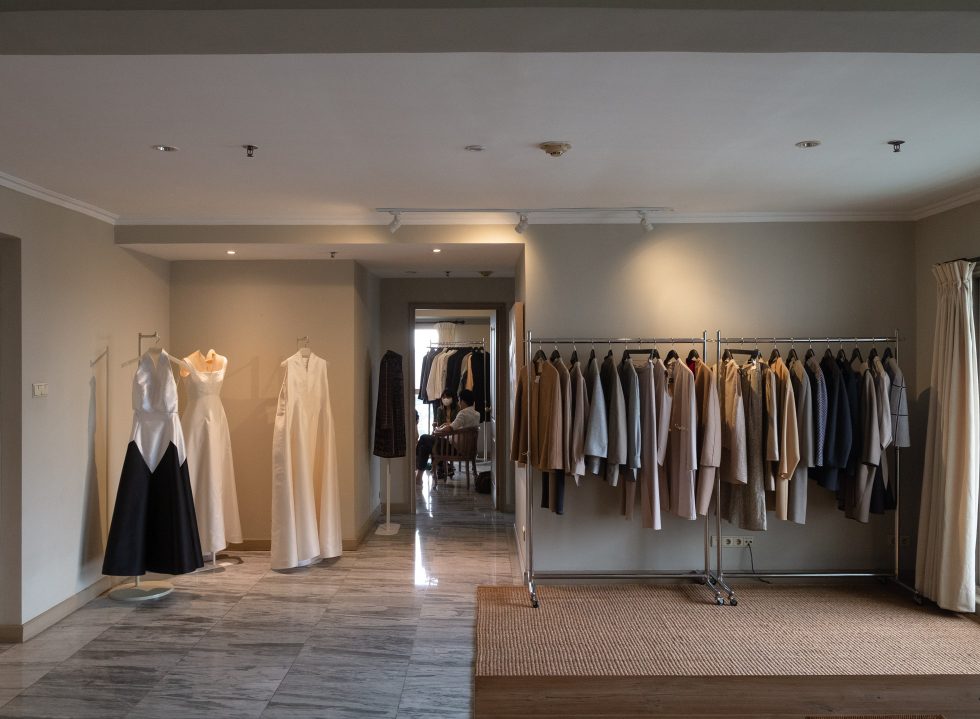 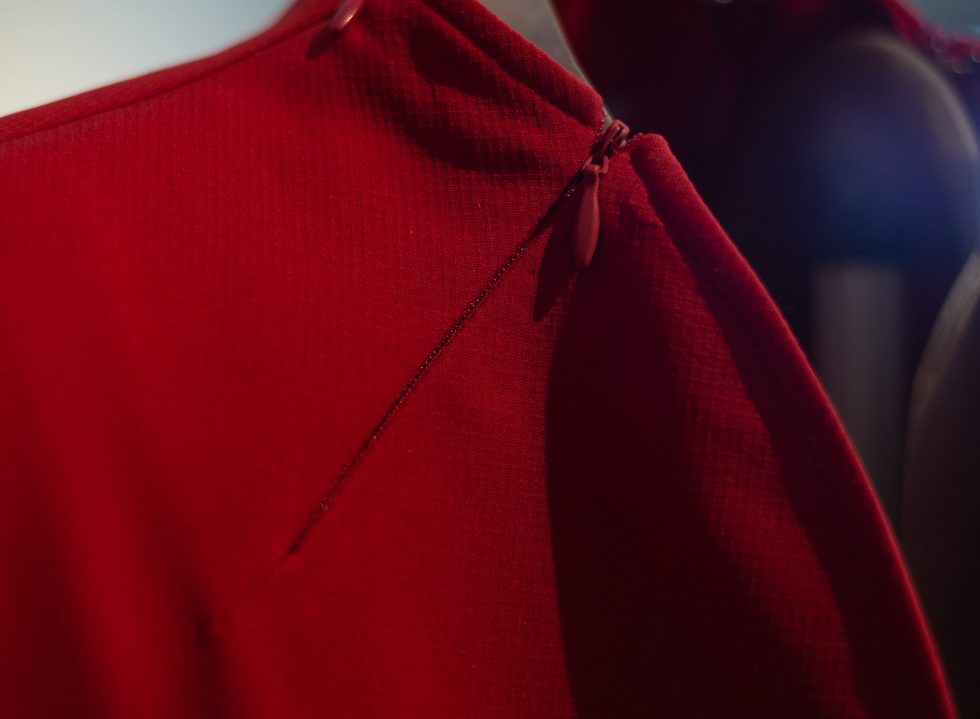 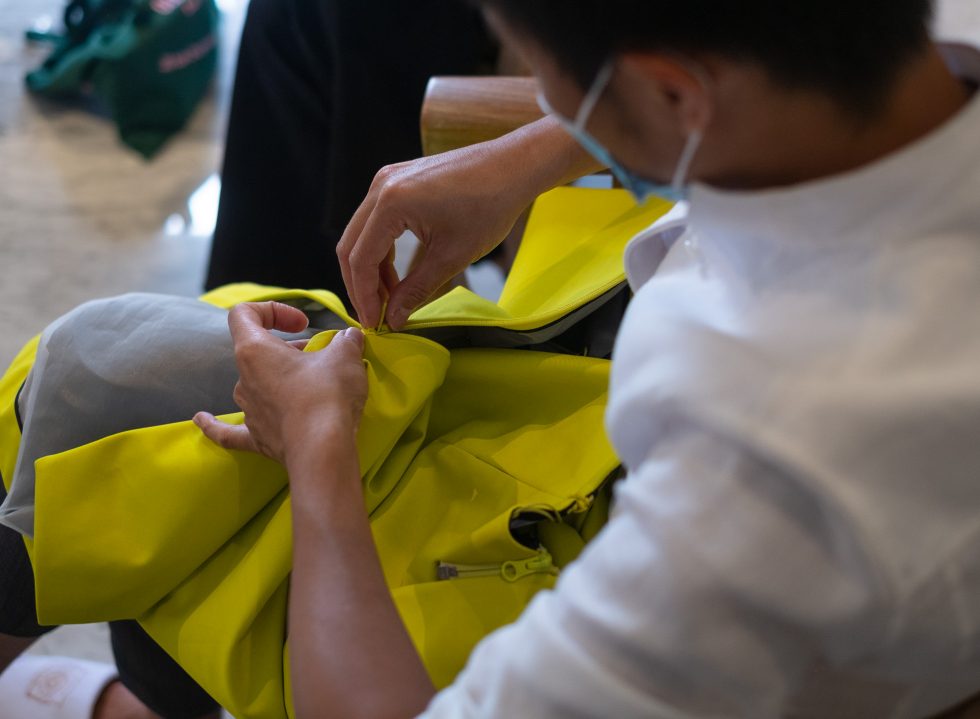 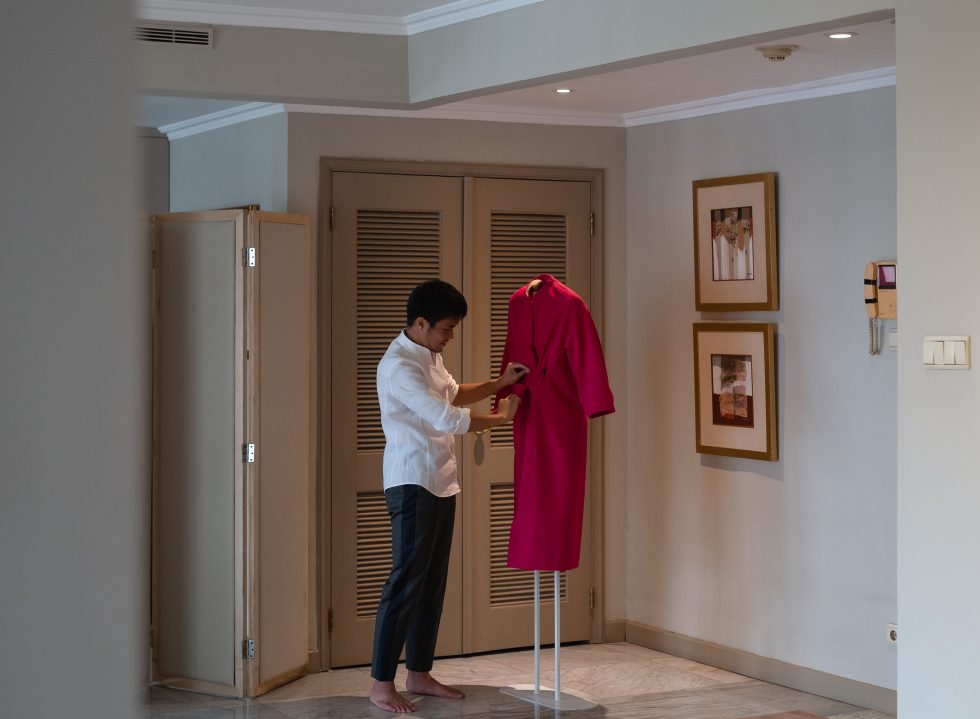 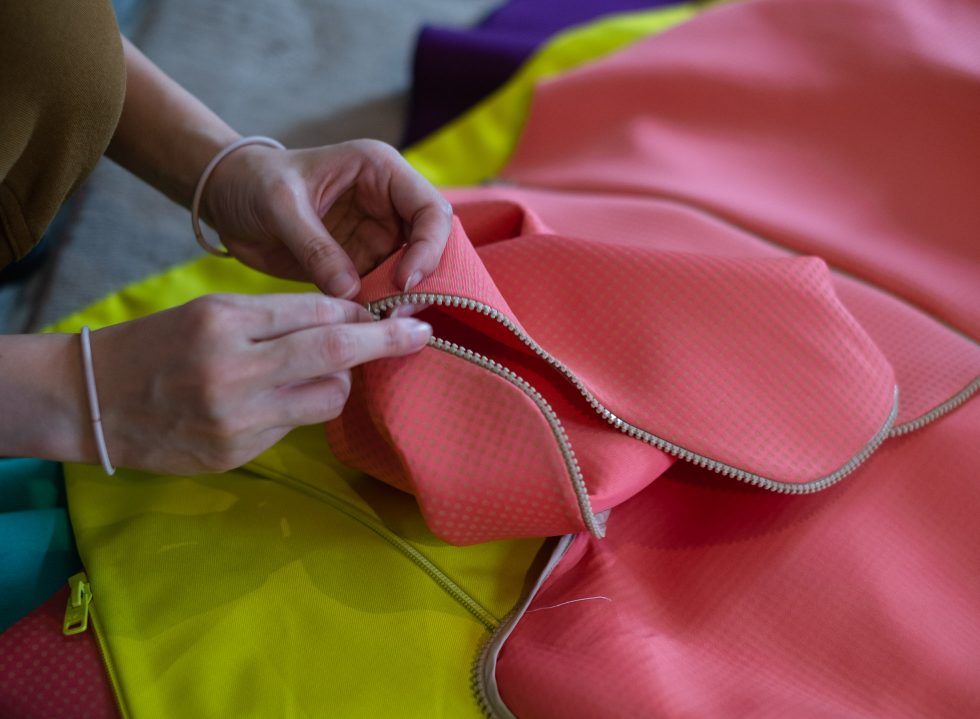 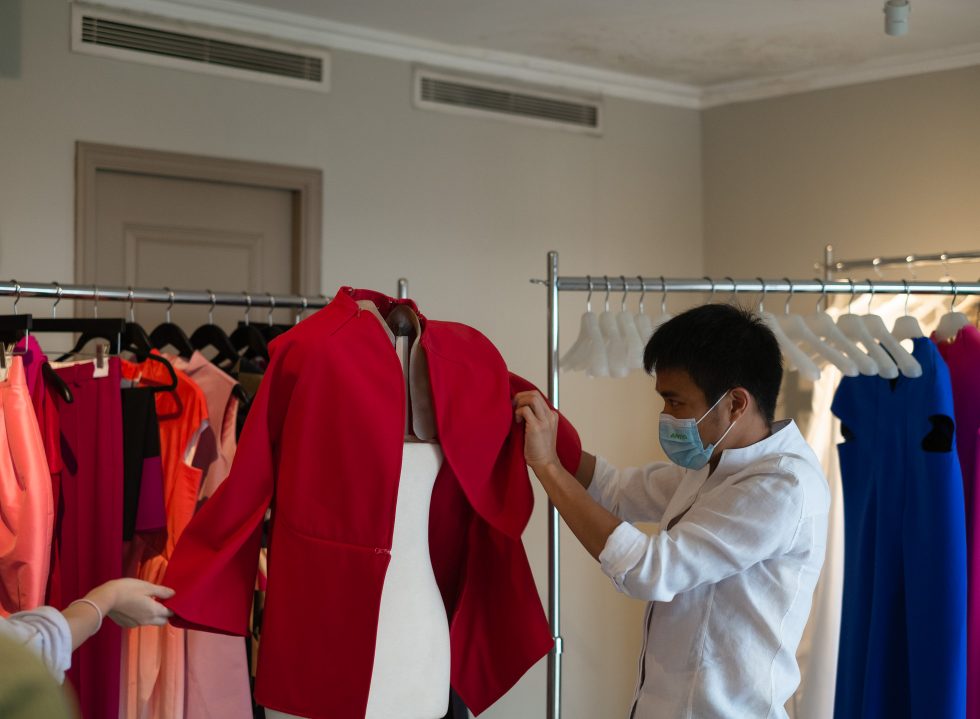 Share
Singularity, a follow-up to Auguste Soesastro's first solo exhibition Architecture of Cloth, encapsulates the designer's quest and exploration in pattern making, which continues to be expressive in his strive for minimalism and influence in architecture.

Backtrack to 2016 and Auguste Soesastro had just unveiled his first solo exhibition, Architecture of Cloth, at Dia.Lo.Gue Artspace in Kemang. It was a showcase of his work as a fashion designer, whereby influences of visual arts and architecture ran deep. The exhibition was also the basis of Auguste’s experimentation with patterns, from displacing seams to dissecting patterns, as his way to achieving a form of minimalism he desired.

Five years later, the founder of couture label KRATON followed up with ‘Singularity’, which marks the second chapter of his first exhibition. “We plan to unveil this as soon as possible, maybe in April,” said the 39-year-old designer. Much like its precursor, this body of work spotlights Auguste’s exploration in pattern making, along with the process that transpired into a selection of 14 garments, each constructed from one pattern piece.

So far, what is exclusively revealed of Singularity is a six-minute preview that shows how each garment looks like when the material is laid flat, which at first blush, resembles inkblot images from the Rorschach psychological test. Then, the video follows Auguste and his two assistants in a studio set, as they assemble each garment onto the body of the model by zipping its parts to form the body of the design. “People might find the idea of disassembling the garment into something flat interesting. I actually like looking at it when it’s all disassembled and flat,” gushed Auguste.

“If there’s still a joining of other material, that means we fail and we have to start from scratch again.”

For spectators of Auguste’s work, the surprise may come from the selection’s popping palette, like the bright pink coat or the blue two-piece dress, but what is the intricacy behind the construction of each garment? “The challenge I set myself is to reduce pieces of patterns, so everything here – be it pants, top or dress – are made with one piece of fabric,” said Auguste at his showroom. “If there’s still a joining of other material, that means we fail and we have to start from scratch again.”

After all, Singularity is expressive of Auguste’s tenet in minimalism and while employing less is deceptively simple (“less things, less possessions, less complications” as he said), the concept reckons its own complexity and precision in the process. “It’s a nightmare to create things with just one pattern piece and still not looking like a sack that you just pinched and pleated – which is much easier to do. But here, we still want to keep the traditional idea of pattern making,” said the Ecole de la Chambre Syndicale de la Couture Parisienne alumnus. “[With Singularity], we’ve kind of broken the rules with pattern-making, but only because we’ve come to really understand it, that’s why we can break it.”

The result, which Auguste has worked on from December 2019 until last October, birthed pieces that magnify what the designer has always been known for: clean, understated aesthetics. The pieces, ranging from a dress and a coat to a two-piece attire, are made with affordable fabric, such as neoprene. “People like [the fabric] because it’s got a certain look, it’s got a body to it. But we use these to demonstrate the pattern making.”

Much like the first volume of Architecture of Cloth, Singularity continues to be implicit in Auguste’s philosophy and understanding of architecture, a discipline that he has delved into before fashion at The University of Sydney. Shown in the designer’s way of conceptualising clothes and pattern making, it’s the combination of architecture and engineering that one has to fully grasp, he stated.

“[With Singularity], we’ve kind of broken the rules with pattern-making, but only because we’ve come to really understand it, that’s why we can break it.”

“I am trained as an architect, so I still think that way, even with clothes,” said Auguste. “I think the most important thing in architecture is to create things that are structurally different. Not necessarily from the outside, but how the structure inside the walls is able to create space. The way I see things is completely affected by my understanding of architecture.”

If the 2016 exhibition showed the basis of how Auguste started to experiment and dissect patterns, then Singularity is how the designer and team arrives at its destination. Yet even after reaching this point, Auguste thinks there is still more work and exploration to be done. “I think it was very precocious to do it [in 2016] because we didn’t do it properly yet. Even Singularity is still a work in progress and we’re not going to stop here.”

If somebody were to ask Auguste, “How can we sell the pieces in Singularity?” the designer might not know the answer just yet. Maybe they can be sewn up and made with better fabrics. If they were to be sold as-is, maybe he can provide instructions on how to assemble them with the zippers. But as far as Auguste is concerned, the commercial aspect proved the least interesting, as with Singularity, the explanation to give isn’t so much in the end result, or how they will commercialise. Instead, the process entailed and the idea that’s been explored and developed through the years are what’s worthy of attention and appreciation.

“With exposure to social media, everyone is doing nice things, but nice is not enough,” said Auguste, laying emphasis on the exploration and complexities that go into Singularity, which cannot be separated from the expertise of a team that has been with him for almost a decade. “We want to put forward this process and show what we can do in our atelier, along with the research we put into. We are not just about making clothes here.” 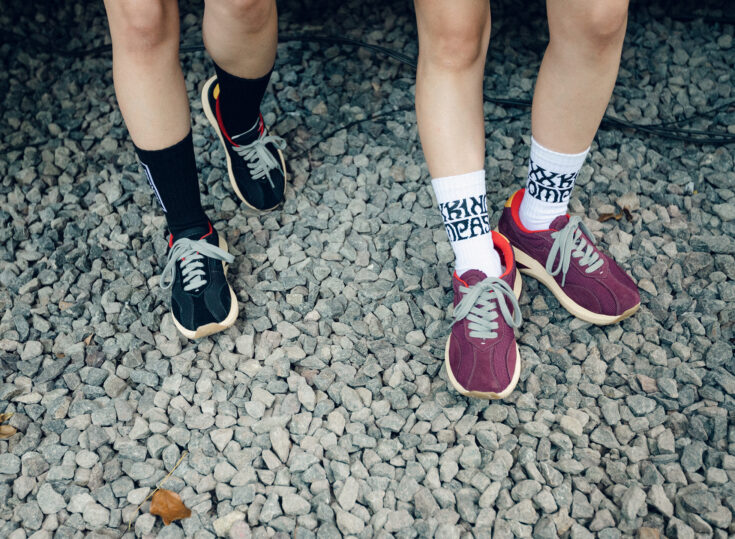 Compass® and Fxxking Rabbits' latest collaboration for the Lunar New Year, #FXXKINGCOMPASS "Year Of The Rabbit", reveals the two brands' hunger in making a noteworthy first impression amidst the fast-paced, digital-dominated world. 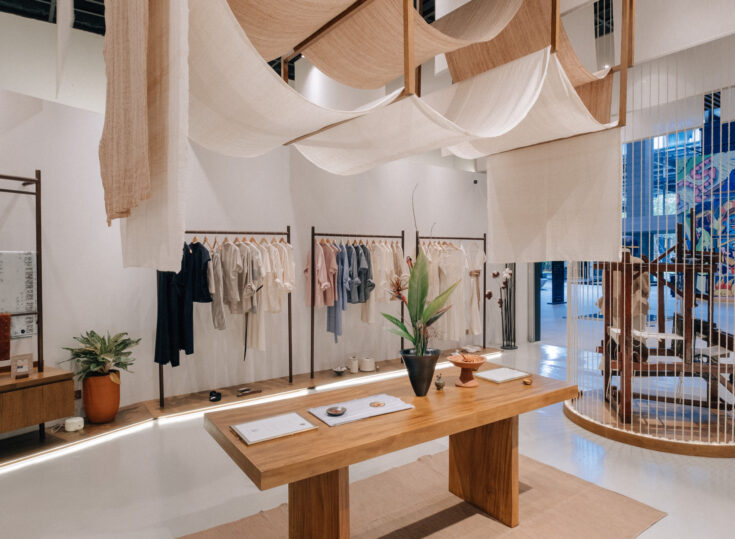 SukkhaCitta Highlights the Farm-To-Closet Concept At Their Flagship Store

Bringing the farm-to-closet concept closer, SukkhaCitta’s flagship store in Ashta District 8 showcases the stories and values of their artisans through pieces handcrafted out of regeneratively-grown botanic dyes and threads.

Gracing the runway of Dewi Fashion Knight at Jakarta Fashion Week, Peggy Hartanto and Sean Sheila assembled collections that continue to showcase what the brands are known for amongst their clientele.

At Sejauh Mata Memandang, a Responsible Take on Fashion

Sejauh Mata Memandang displays a concrete direction of what they stand for through ‘Baur’, a collection that fuses local influences with a global perspective, interspersed with a combination of upcycled and new fabrics.