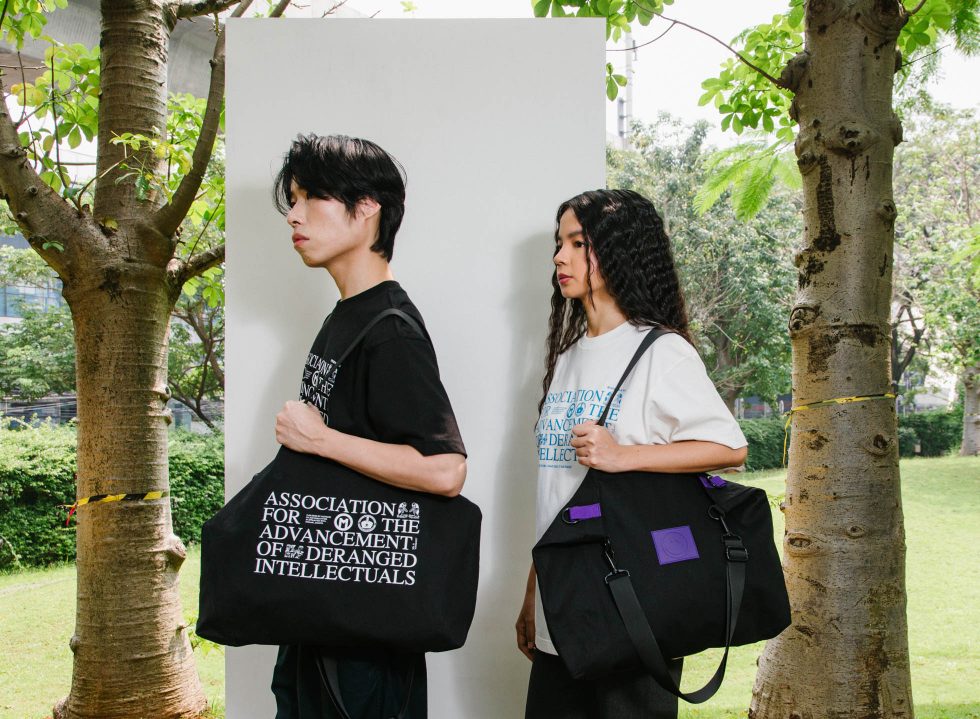 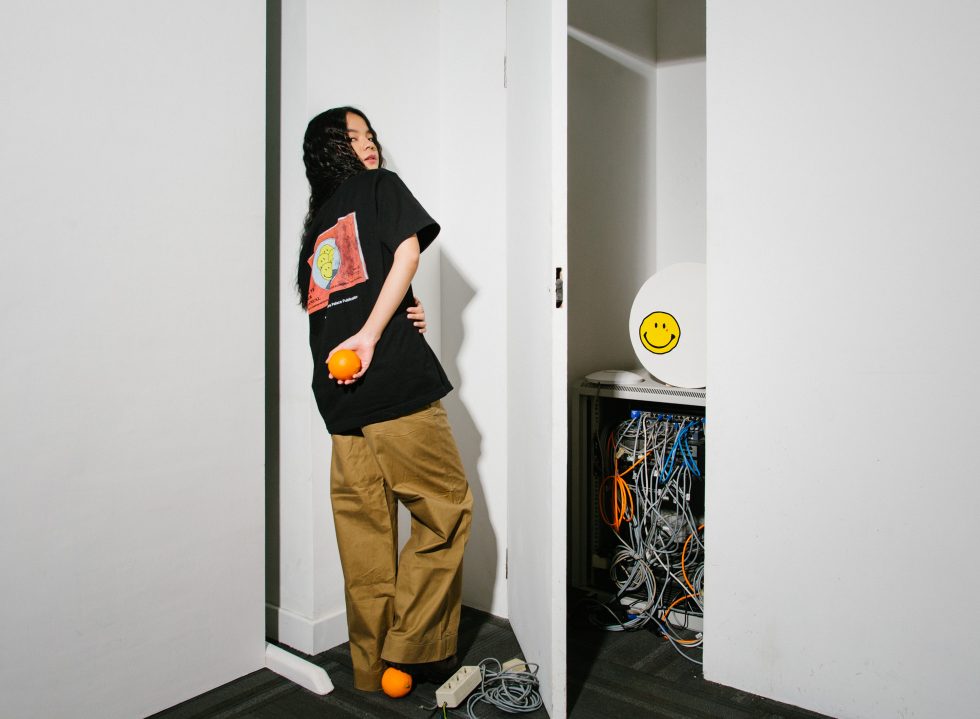 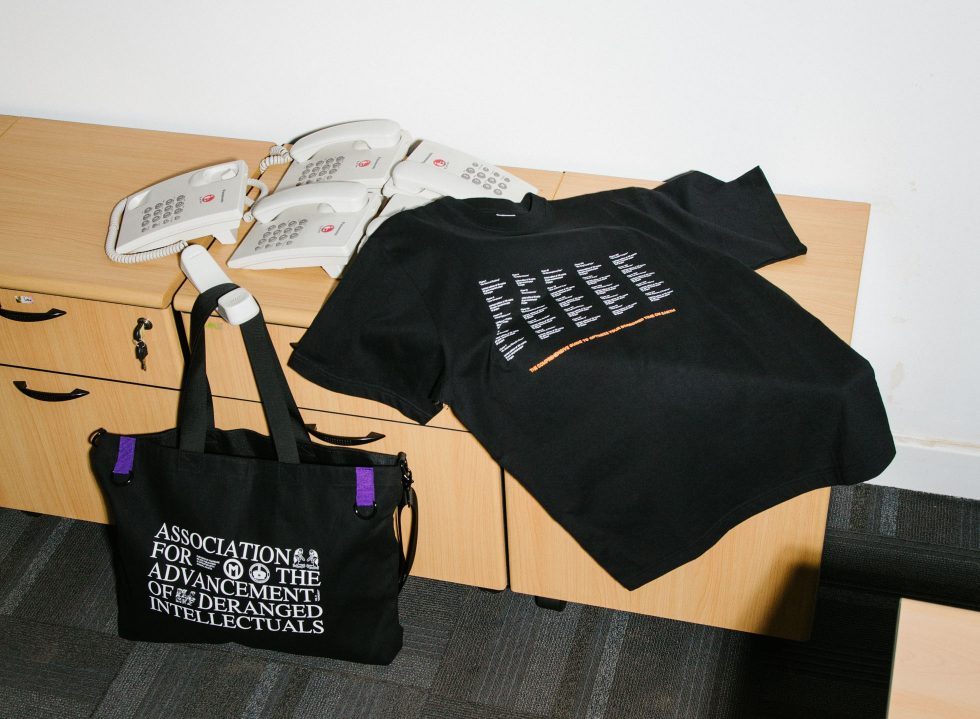 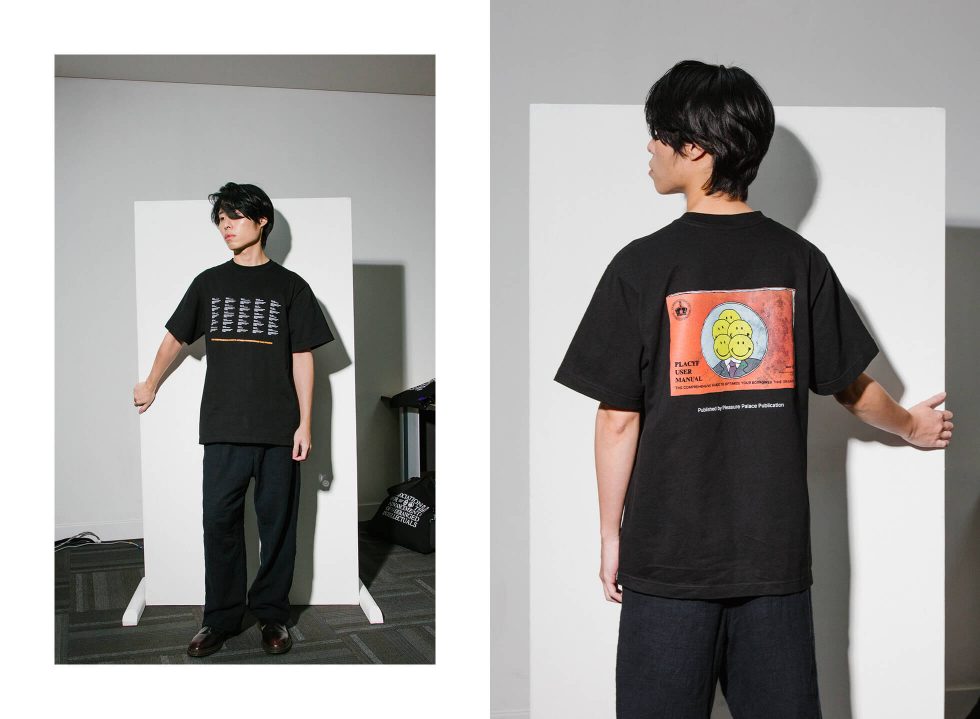 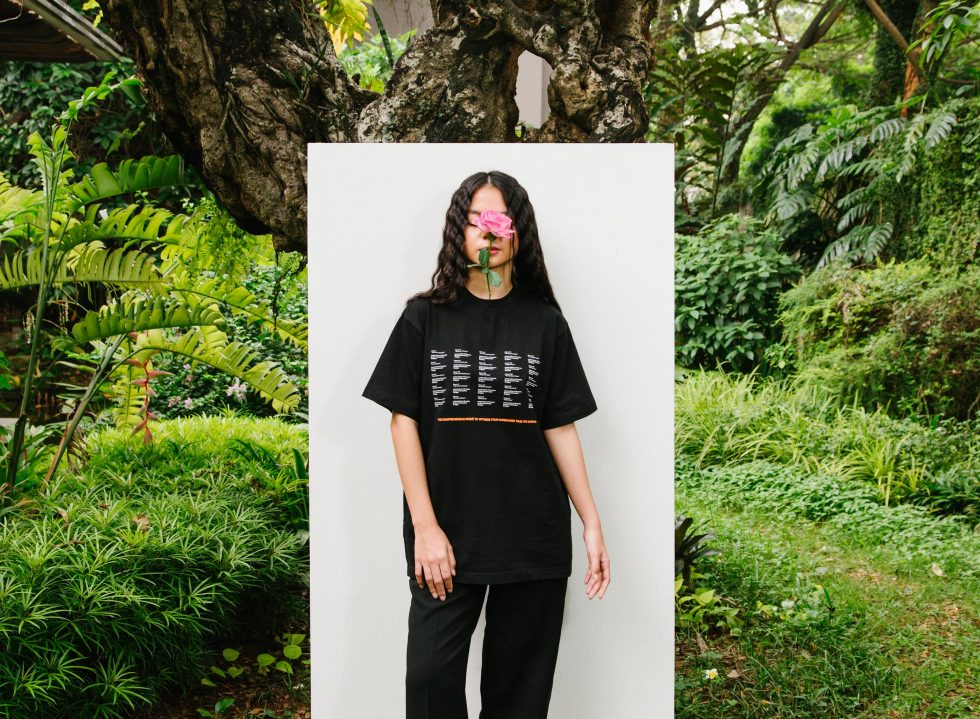 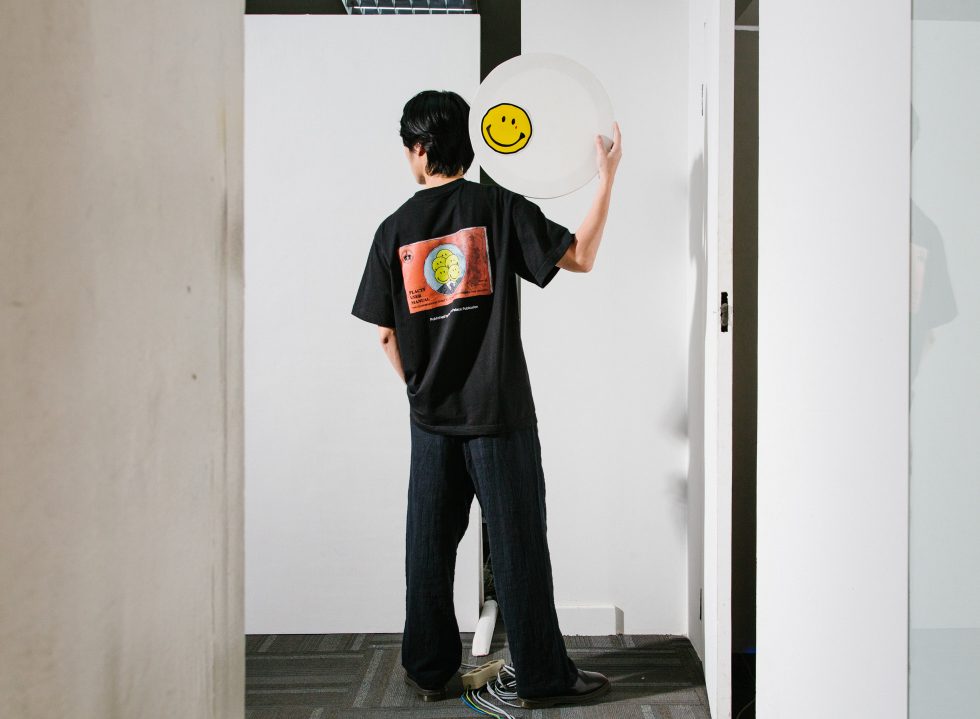 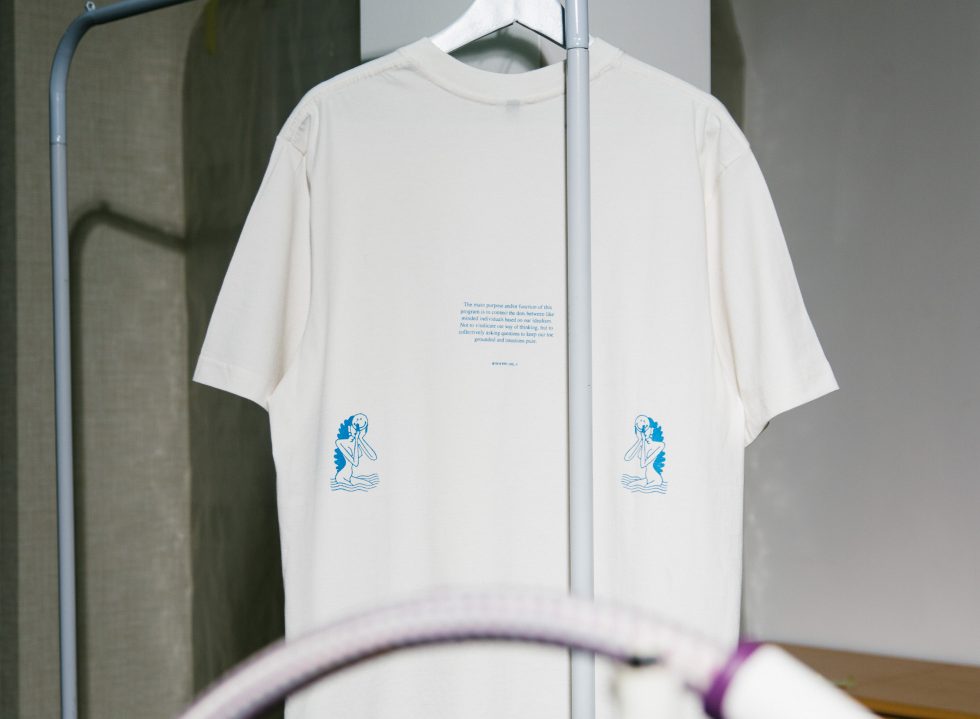 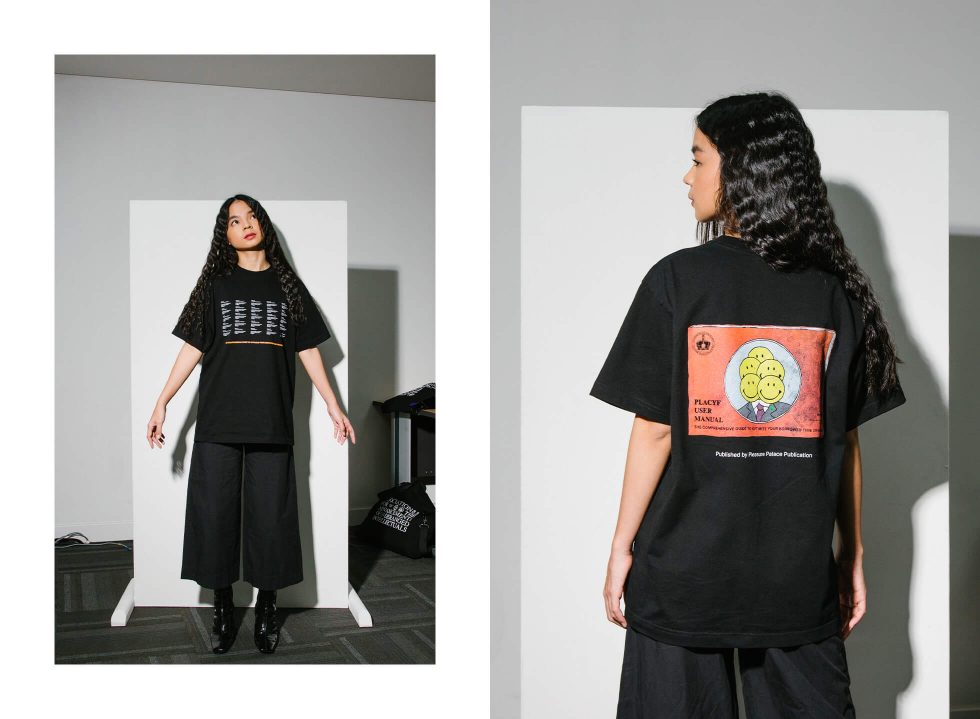 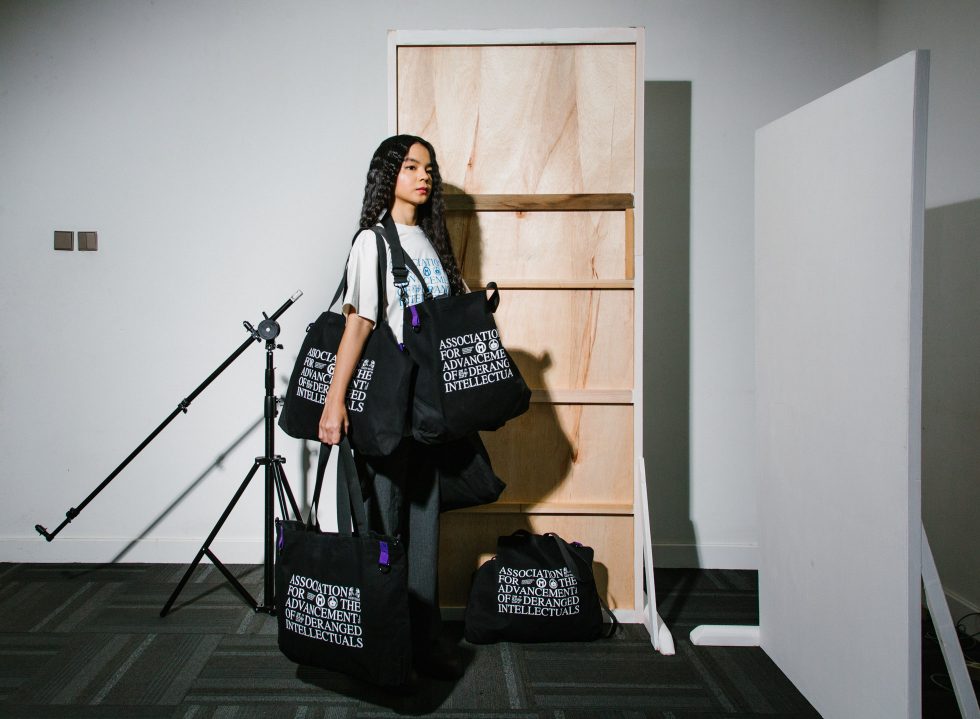 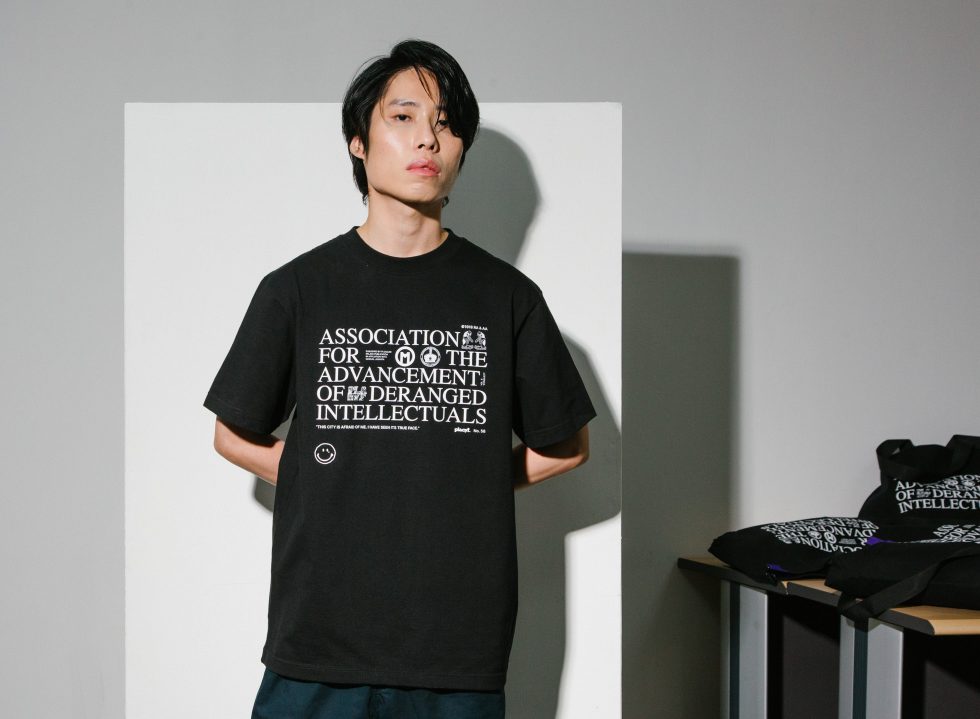 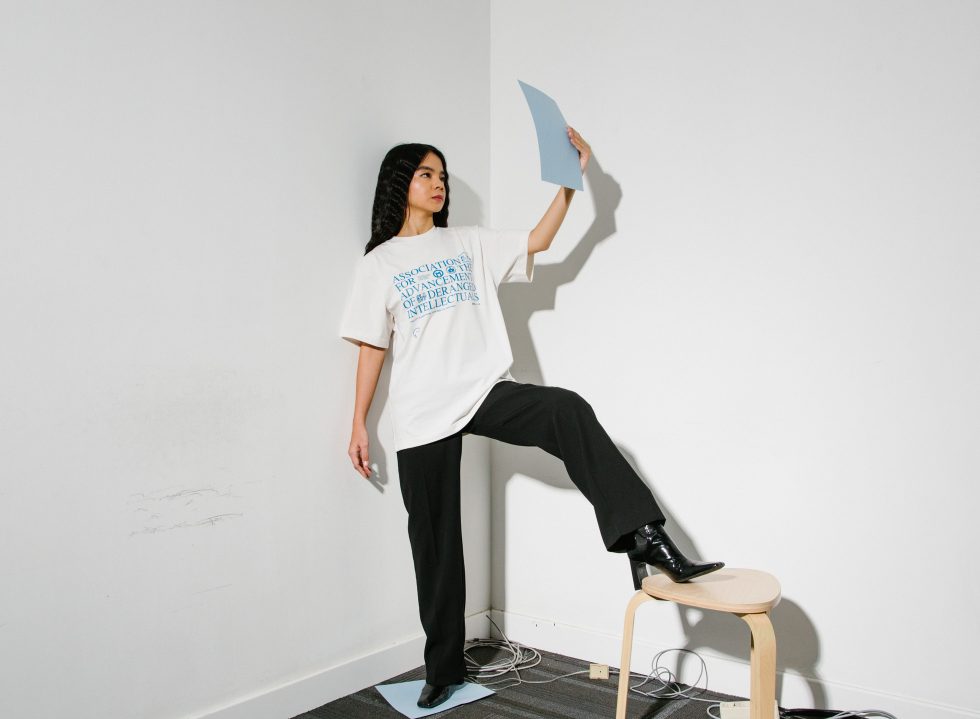 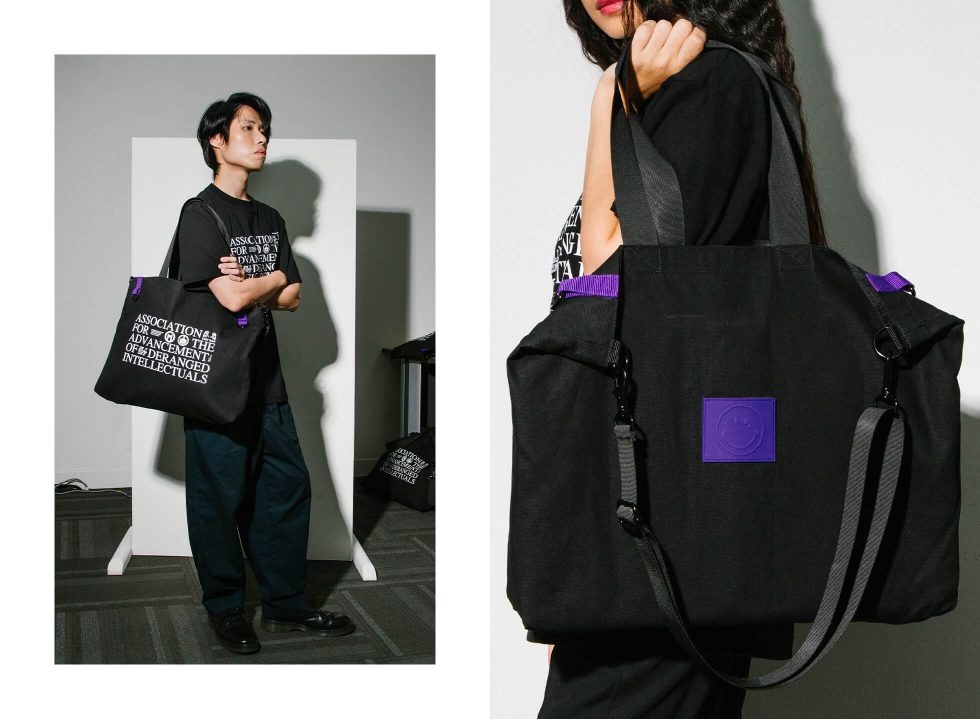 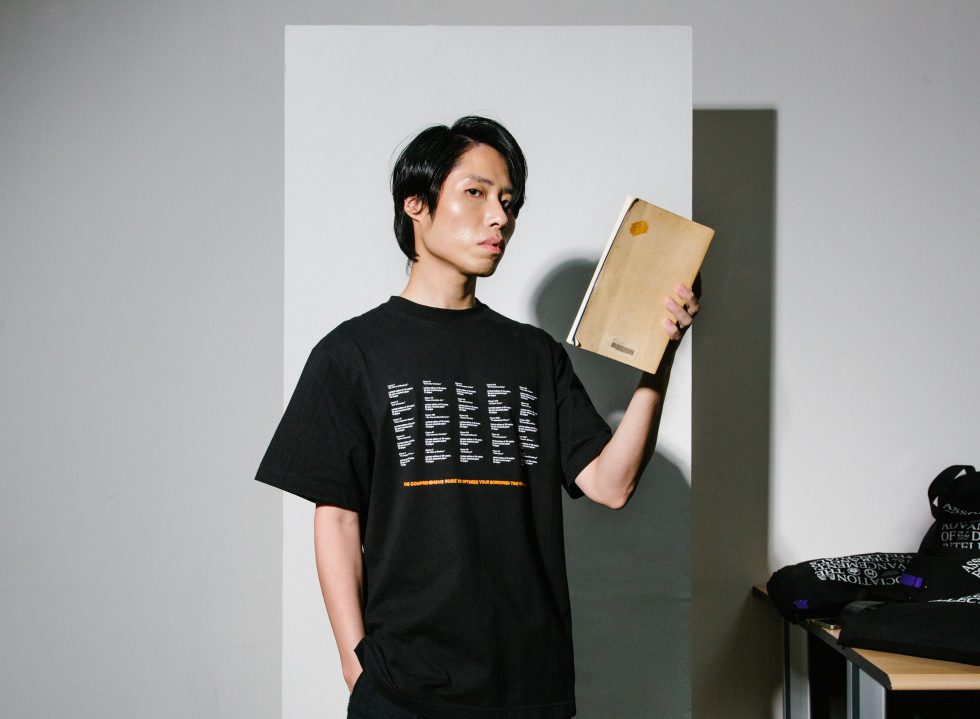 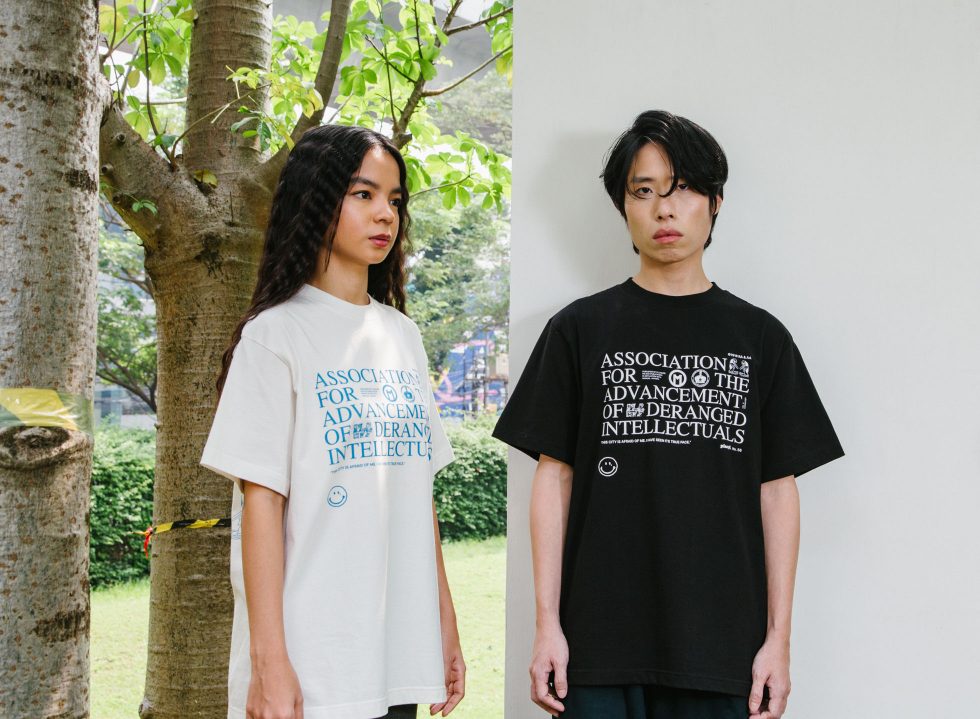 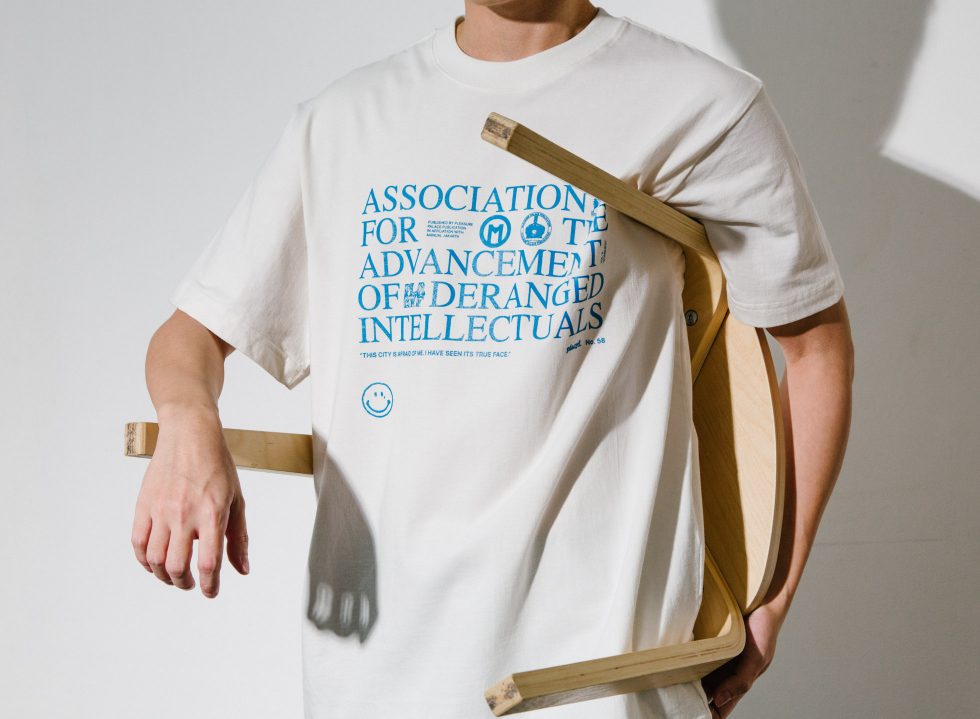 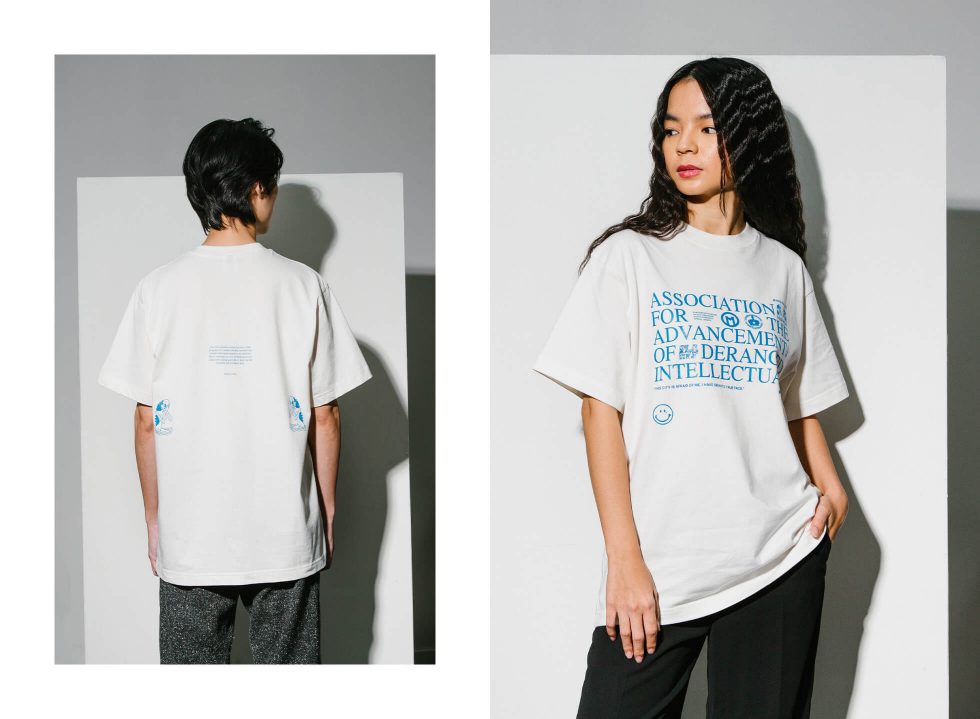 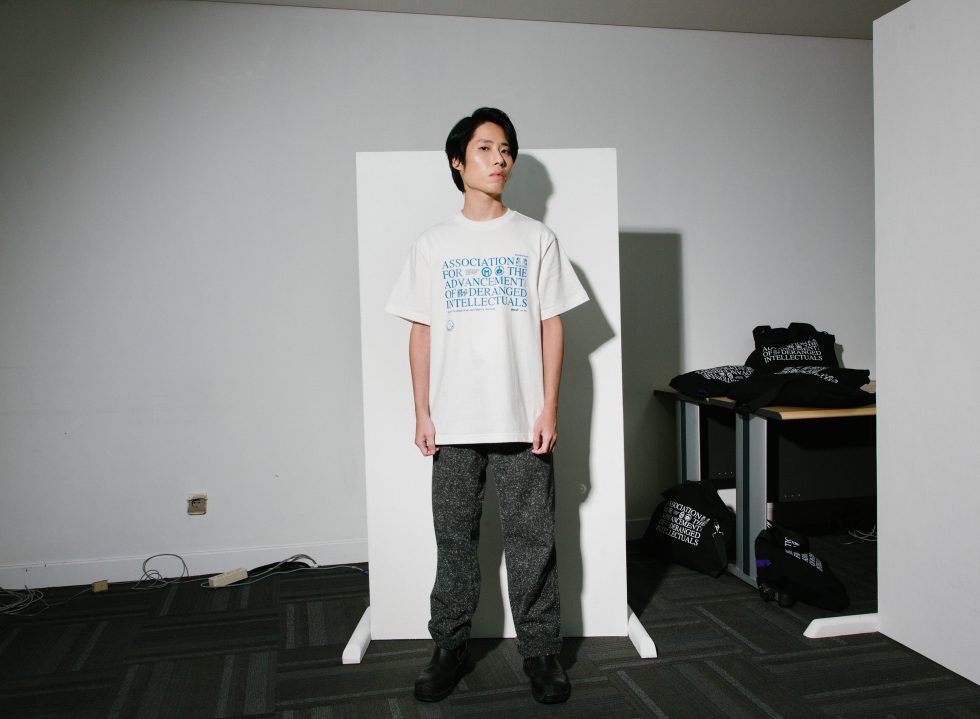 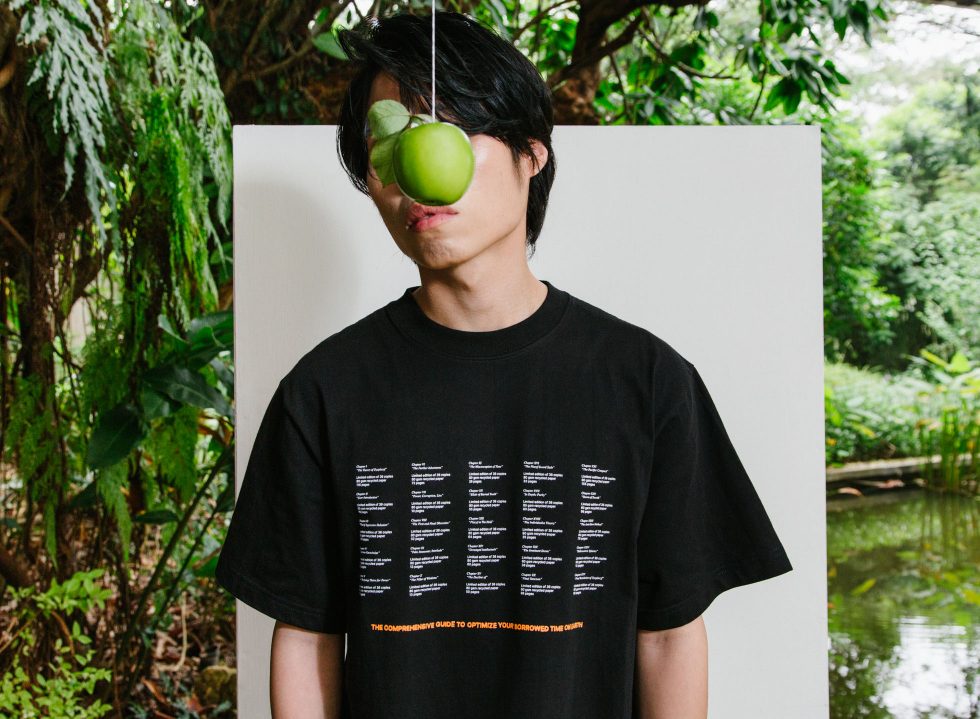 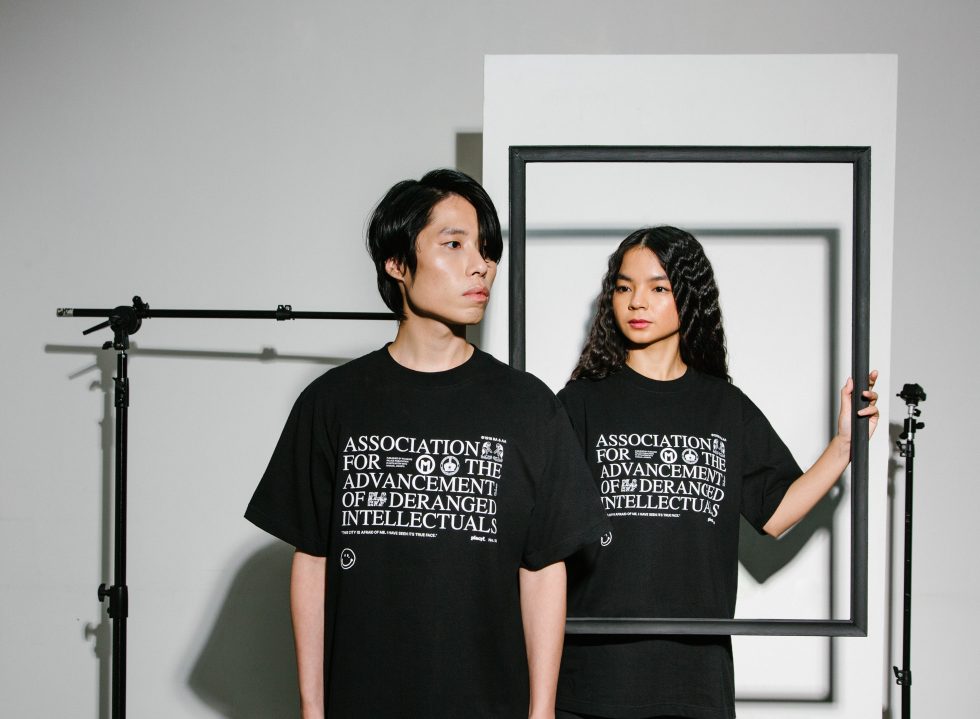 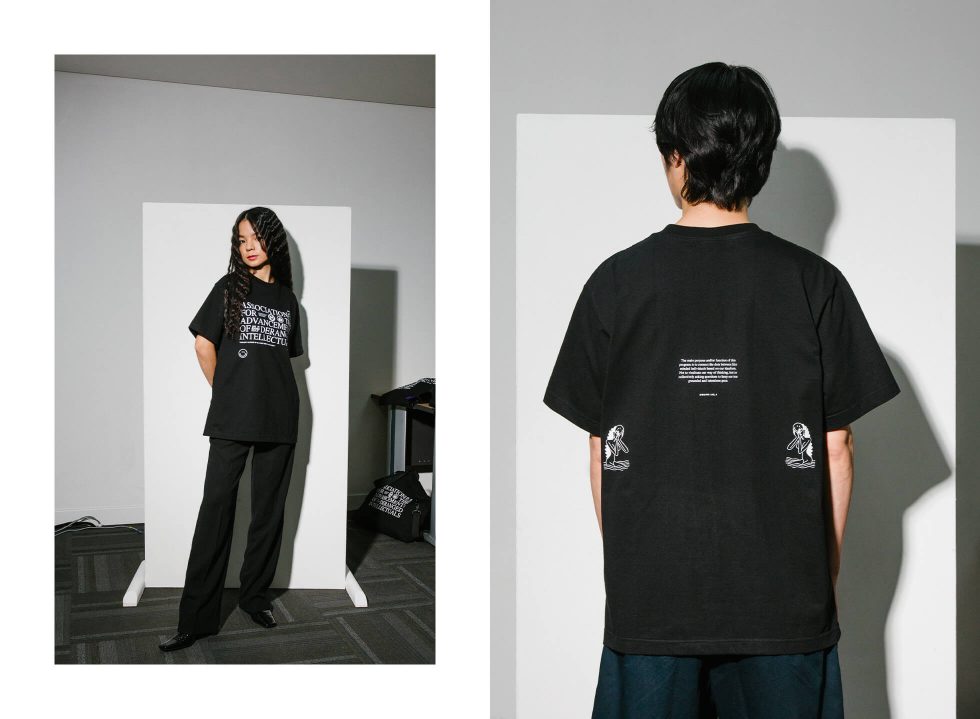 Share
Combining the design identity and visual markers distinct to both Placyf and Manual, the release of the exclusive merch collaboration, ‘The Theory of Dysplacyf’, merges the narratives and values of the two through a limited-edition lineup of t-shirts and a tote bag.

“Placyf has always been about presenting an alternative and non-conformist mindset. It’s all about counter-culture,” shared co-founder Ramiz Alamsyah. This was the frame of mind that Ramiz and Andre Arnoldus, founders and creative directors of the brand, adopted when they decided to turn their side project, which they started in 2017, into a full-time operation in 2019.

Colliding visual cues and references from literature, art and films, Placyf’s collections gravitate toward daily wear and necessity items that “tell a story. It’s quite personal in a sense that the ideas stem from what Andre and I are thinking about, watching, or listening to at the time,” added Ramiz. For one, the teary-eyed smiley icon, which had grown to be the brand’s visual identifier, was inspired by the villain character, The Comedian, from the comic book series ‘Watchmen’.

For Ramiz, who taught himself how to design, Placyf also became a way to reignite a hobby he’s formed since middle school. “I used to collect t-shirts, some band merch and concert tees. But I would rework them and screen print graphics on them. Both Andre and I see t-shirts as collectables. I guess that’s why most of our products are t-shirts.”

Primarily sold in limited quantity, each of Placyf’s products, be it a rug, crewneck or unisex tee are clearly tagged with the brand’s identity, where characters, themes, or quotes from books and movies are developed into hand-drawn illustrations, words and layout—almost like flicking through a refined sketchbook, where the two candidly gushed out whatever was on their minds.

This visual language also rolled into the exclusive merch collaboration with Manual, ‘The Theory of Dysplacyf’, which was launched earlier through an offline event at Pò SupperKlab this week. The lineup includes two different designs of cotton tees and a canvas tote bag, imprinted with Manual’s signature colour palette of black and orange while still bearing visual markers distinct to Placyf.

Andre chimed in, “The starting idea was how to tie both Manual and Placyf’s identities in a visual format. The idea of ‘Deranged Intellectuals’ seemed to hit the right spot for both Placyf and Manual and we thought of realising that through a book illustration.” This particular design was screen printed onto the back of one of the tees, coloured in Manual’s signature orange.

Stamped with Placyf’s edgy humour, the illustration reads “The comprehensive guide to optimize your borrowed time on earth”. While on the front side, titles of book chapters are neatly aligned. Also seen on the other t-shirt and the tote bag is the brand’s peculiar catchphrase, “Association for the advancement of deranged intellectuals’’ further accentuating the pieces.

Serving both function and a distinct style, the collection links the brands’ unifying themes that aren’t afraid to go against the grain. “I think there are elements of Placyf and Manual that overlap. There’s a shared interest in literature and a determined resistance to showcase something different. We wanted to connect the dots between the two and gather like-minded individuals who resonate with the idea,” mused Ramiz.

The exclusive merch collaboration between Placyf and Manual, ‘The Theory of Dysplacyf’, is now available online on our Tokopedia store and Placyf’s website.