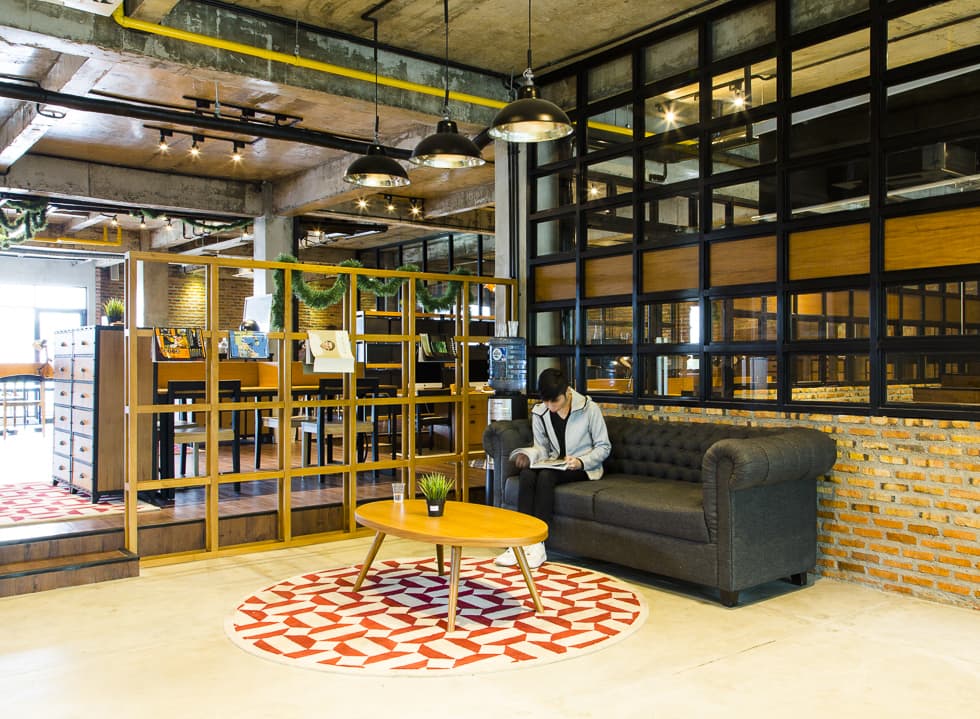 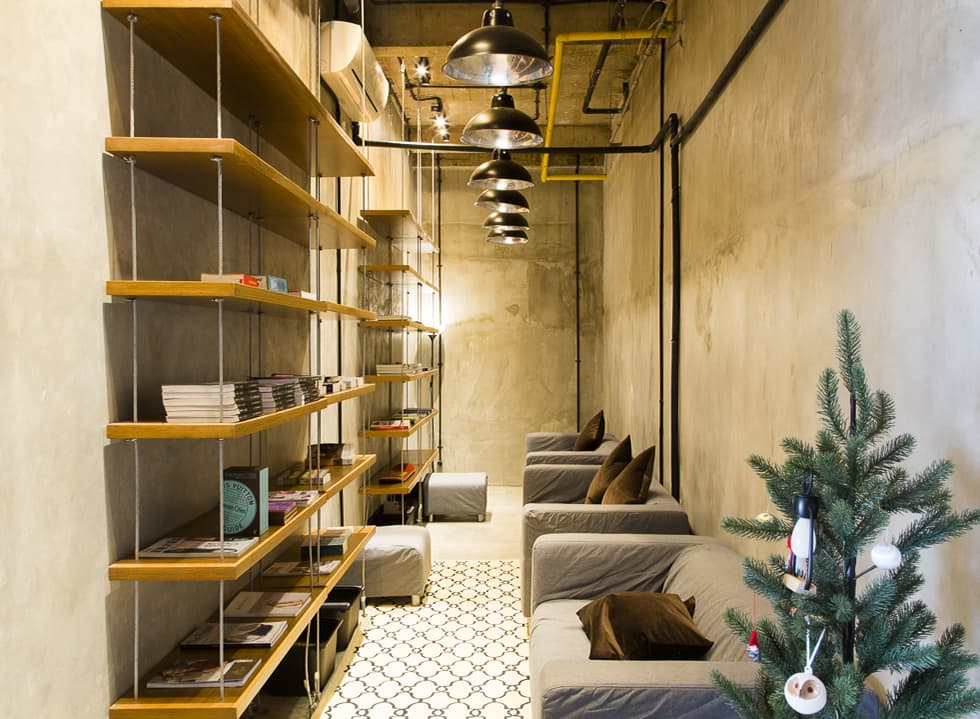 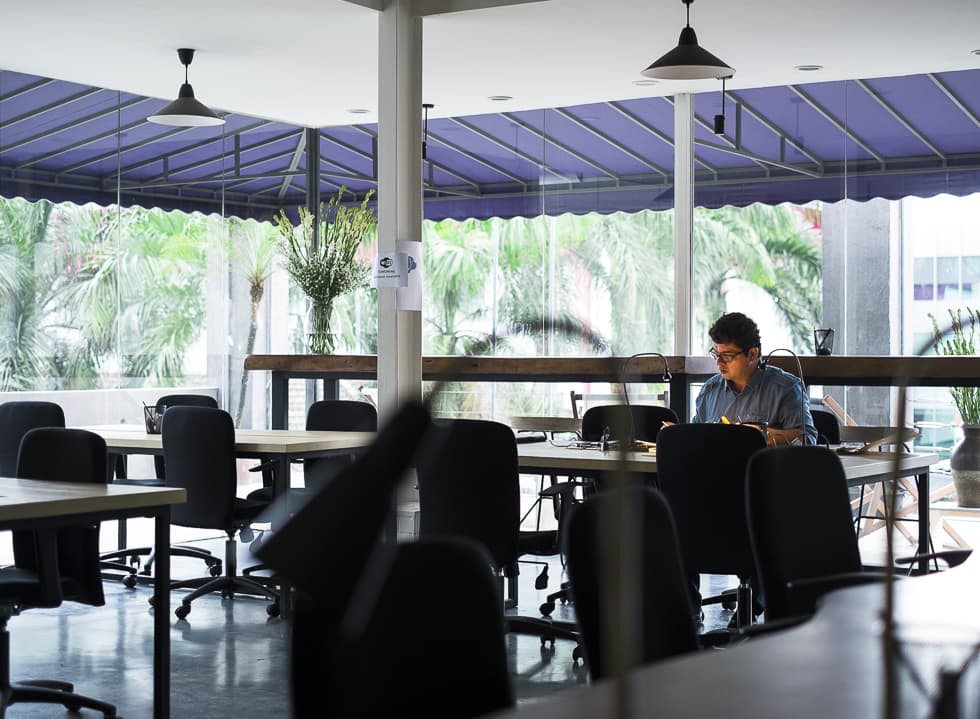 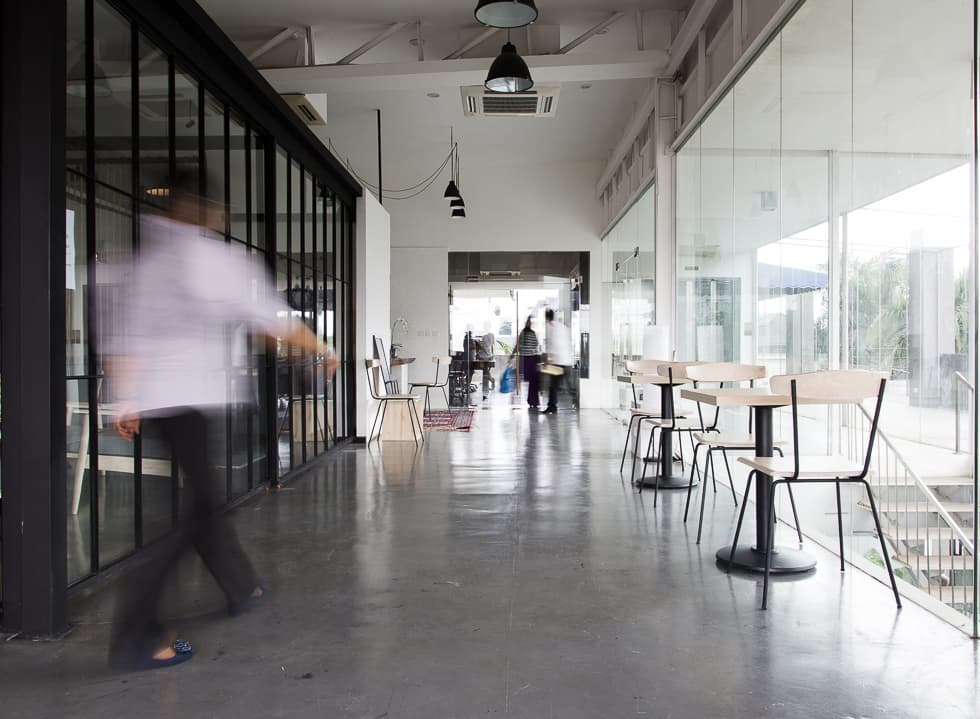 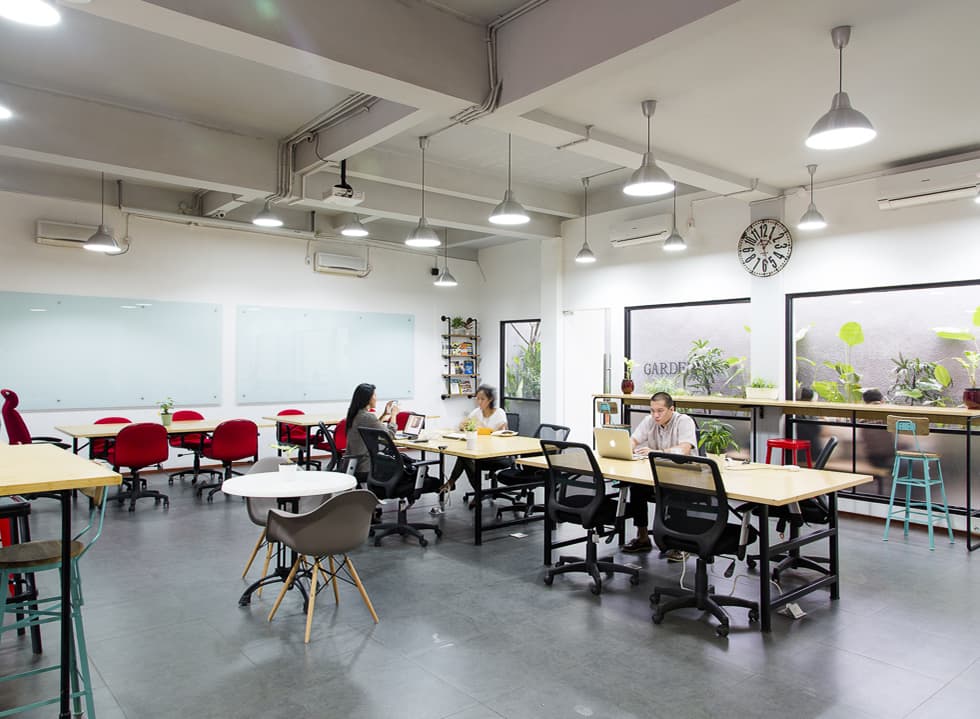 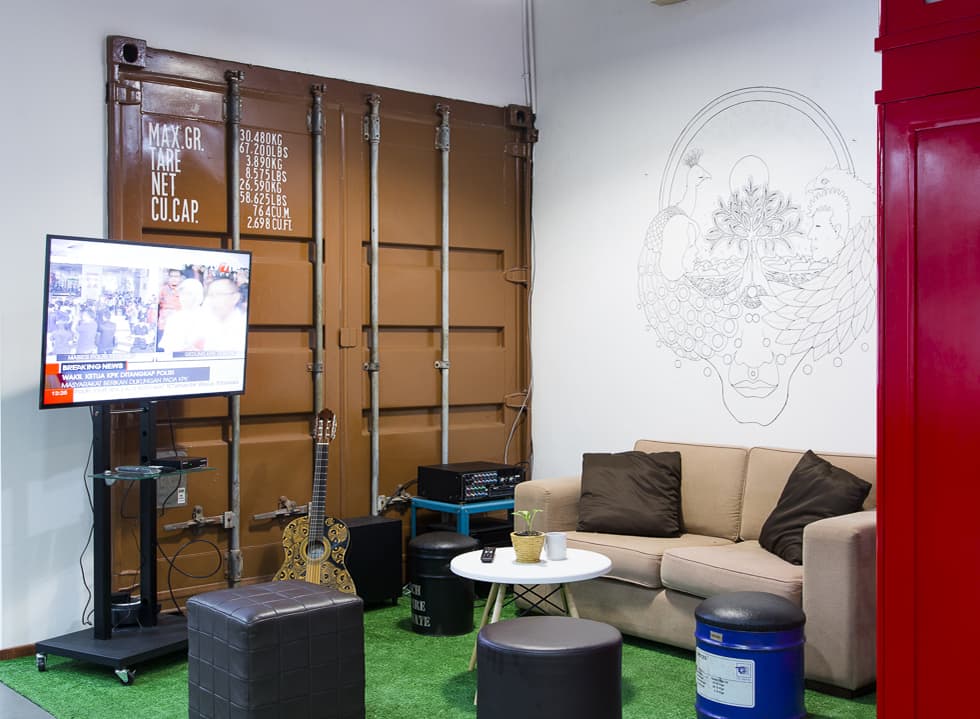 The Curious Case of Coworking Space

Share
The sudden rise of coworking space in our city puts forward a question: what is it exactly? From the whats to the hows of a coworking space, we have it all covered for you.

The drab façade of that building makes the place go unnoticed by passers-by for quite some time. The structure seems plain and lifeless, looking almost stark with all its towering glass walls. However soulless it seems to appear, the three-storey building exudes an odd charm – a charm that somehow lies within the placid quality of the building.

But one couldn’t judge a building by its façade.

The building is a home to Conclave, a coworking space that has stood since December 2014. Again, it may look placid and peaceful from the outside, but only a few know that in here, countless creative minds collide. Indeed, coworking space is no ordinary workspace, and sometimes it takes a lot of energy for the brains behind this promising business to explain the real purpose of coworking space.

“Coworking space is not just a place to work, but more a hub where people could associate and connect,” said Bradhika Ayodya, Conclave Marketing Manager. “I believe there’s only three out of 10 people who really understand what a coworking space is and how it works,” he quipped.

“Working at home is not an option anymore because of the many distractions it yields. Yet, they couldn’t afford to rent an office space.”

Nobody could exactly pinpoints on the map, locating where this coworking space culture first emerged; but one thing for sure, the culture has flourished worldwide. Starting only three years ago, Indonesia – mainly Jakarta – has become a witness to the burgeoning rise of coworking spaces. The presence of these spaces is the answer to a similar rapid increase of young start-ups and freelancers within the urban scene.

“The idea came when Conclave founders, Aditya Hadiputra and Marshall Utoyo, think how costly it is to work in a café. As freelancers, it really bothers them to pay, say 100K rupiahs for a cup of coffee and nibbles, to work in a café that’s not even conducive as a workplace. And working at home is not an option anymore because of the many distractions it yields. Yet, they couldn’t afford to rent an office space,” said Bradhika.

Coworking space is almost like an ordinary office, only with more sophisticated and thematic interiors. The space also provides supporting facilities just as what ordinary offices have; among those are printing machines, high-speed wi-fi connection, a pantry with free flow water/coffee/tea, and even shower rooms with lockers. As for Conclave, the place has a studio down at basement to do hands-on tasks like carpentry.

There’s practically almost everything to suit everyone’s preferences in a coworking space. Lone-workers who need high levels of concentration may opt to work in focus rooms, while group workers can pay a yearly package to reserve a conference room. But the sole feature that distinguishes coworking space from normal office is the social platform it provides.

“This kind of thing won’t happen for sure if you’re sitting down at Starbucks for hours”.

Moving three kilometres away from Conclave, we are introduced to Coworkinc., the first coworking space in the hip district of Kemang that perched on the third floor of WIMO building. Founded by husband and wife, Dian and Cynthia Hasan, Coworkinc. aims not only to support the country’s creative communities, but also to become a mentor for them.

“We created Coworkinc. because we believe in our country’s future generation. Indonesia’s young creatives should be given a platform to work, to engage in a fruitful discussions and collaborations, and most importantly, mentors to guide them,” said Cynthia.

Having lived in the United States for more than half of her lifetime, Cynthia learned how overseas graduates have more access to discussions with their mentors as compared to those who graduated locally. “Coworkinc.’s mission, as well as my personal’s, is to become a mentor for them,” she added. Mentoring, for Cynthia, doesn’t have to reflect a school-like setting, but can even happen through the simplest episode.

“One product designer, Euginio Hendro of Nook Living, is an apparent example. He’s the one who supplied Coworkinc.’s furniture and I’ve heard countless compliments from visitors who like Eugene’s work because they’ve seen and used his furniture here. Rather than having the furniture stacked up in the storage, it’s much better to put them up here so that his label could gain more exposure. This is simple mentoring at work,” shared Cynthia.

Another time Cynthia witnessed how two strangers – a fashion designer and product designer – who are frequent members of Coworkinc., hit it off immediately and, soon, involved in a deep discussion. Apparently, the matter discussed was about possibilities for them to collaborate in a project. “This kind of thing won’t happen for sure if you’re sitting down at Starbucks for hours,” said the mother of two. She admitted to have seen lots of projects and collaborations came forth from a couple of strangers who just happened to sit next to each other at Coworkinc.

“It’s funny how everything turns out so naturally.”

In a city so urban, it’s almost rare to witness two complete strangers struck up a conversation so trifle, let alone finding shared interests and eventually falling into an intense discussion. That’s exactly what amazed Mira Damayanti, Communications Manager of Tier Space, another coworking space established on September 2014 in Senopati.

At first, founder of Tier Space, Rubianka Atmaja, tried to moderate weekly discussions to help members socialise. Nevertheless, as time goes by Rubi’s intervention is no longer needed. “These [Tier Space members] are strangers at first, but they get along immediately. They converse and exchange their phone numbers. Soon, they start collaborating for a project. It’s funny how everything turns out so naturally,” said Mira.

Though bewildered, Mira, an Australian graduate, is definitely glad as she watches an ‘office culture’ slowly shaping itself at Tier Space. “There’s this member who just got back from a business trip. He brought souvenirs like snacks and place them on the pantry for everyone to partake,” recalled Mira.

The coworking bond doesn’t stop there. It gets stronger everyday through a series of free workshops that further encourage young entrepreneurs in Tier Space to socialise. They also set up a ‘member of the month’ column on the website that contains a succinct business profile of a certain member. This column won’t only promote someone’s expertise, but also serves as a free ‘job ad’ should somebody need a certain expert for his/her project.

“My husband, he’s a member of Tier Space as well as Comma’s (another coworking space in Jakarta) because sometimes he gets jaded for working at the same space everyday. The same goes with our members. If they ask about another coworking space, we wouldn’t hesitate referring them to another space. We [coworking spaces] only have each other, that’s why I think we’re naturally willing to support one another,” she added matter-of-factly.

Mira believes that characteristic of each coworking space also pays a great deal here. Each space caters to different markets, that’s why competition is almost absent. As an example, Tier Space claims to house more IT workers and a few designers. Conclave on the other hand, houses more designers that involve much dexterity because the studio it provides.

“The membership quotes offered at a coworking space also depends on what type of market they’re targeting at,” said Mira, who’s also a freelancer. For example, membership quote at CODE Margonda (Depok) could go as low as IDR 15,000 per four hours, or IDR 30,000 for a day, or opt for the monthly package priced at IDR 660,000. The bargain fare reflects the market it aims: students, because the space is located nearby University of Indonesia.

Meanwhile, the average quote in central of Jakarta hovers between IDR 30,000 to IDR 50,000 per hour, and IDR 200,000 for daily membership. For those wanting to settle in with the monthly subscription need to fish out as much as IDR 3,000,000 from their pockets.

“Another batch of start-ups would sprout-up soon enough to replace the fully-fledged ones.”

However, despite the popularity of coworking space, a question remains still nevertheless: is this a fleeting trend that will soon die away?

“I don’t think it will,” said Mira convincingly. “Coworking space will become a necessity. The existence of office won’t die out because people will work throughout their lives. The same goes with coworking spaces. These start-ups – our current members – will become fully-fledged entrepreneurs and they’d be able to afford their own offices one day.”

But isn’t it something coworking spaces need to be wary of? “We needn’t worry. Another batch of start-ups would sprout-up soon enough to replace the fully-fledged ones,” she said. And we shan’t forget, coworking space is a reliable friend for those who simply get bored working within the same setting everyday.