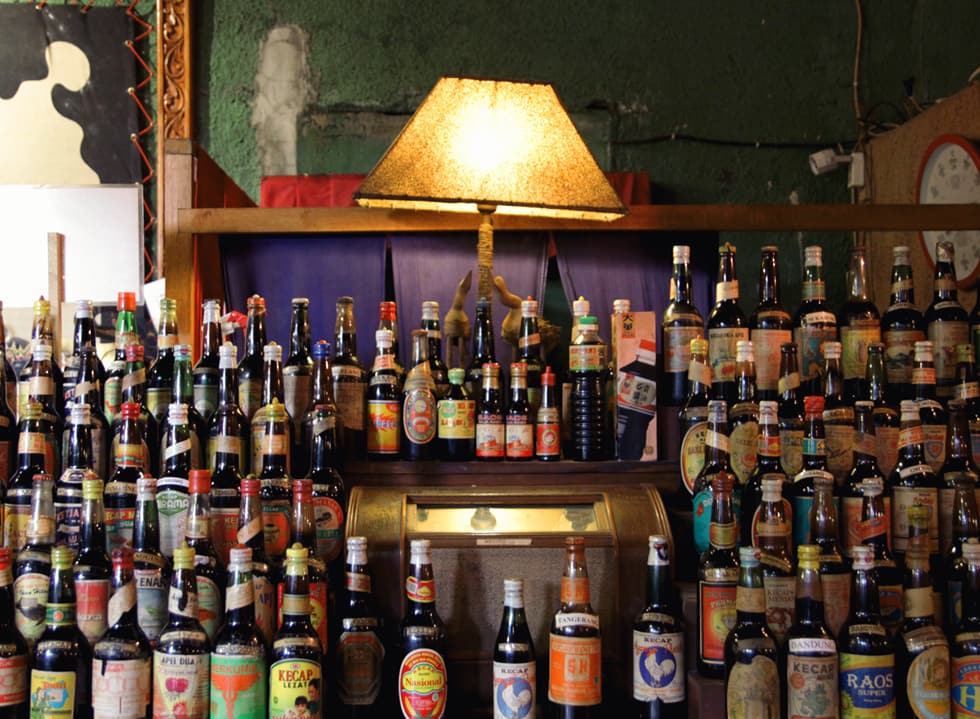 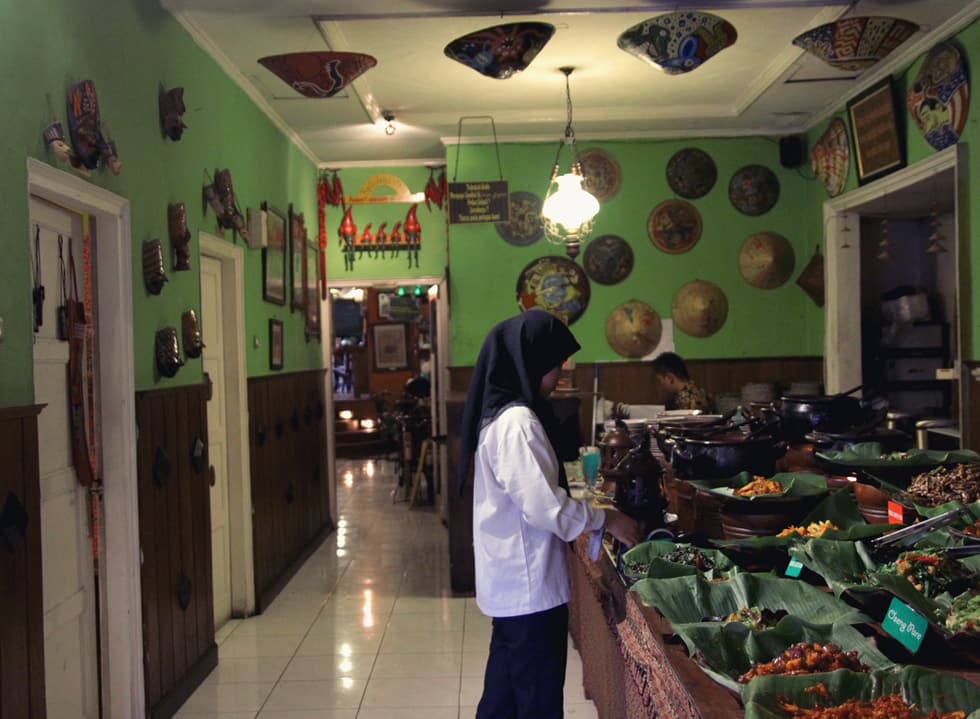 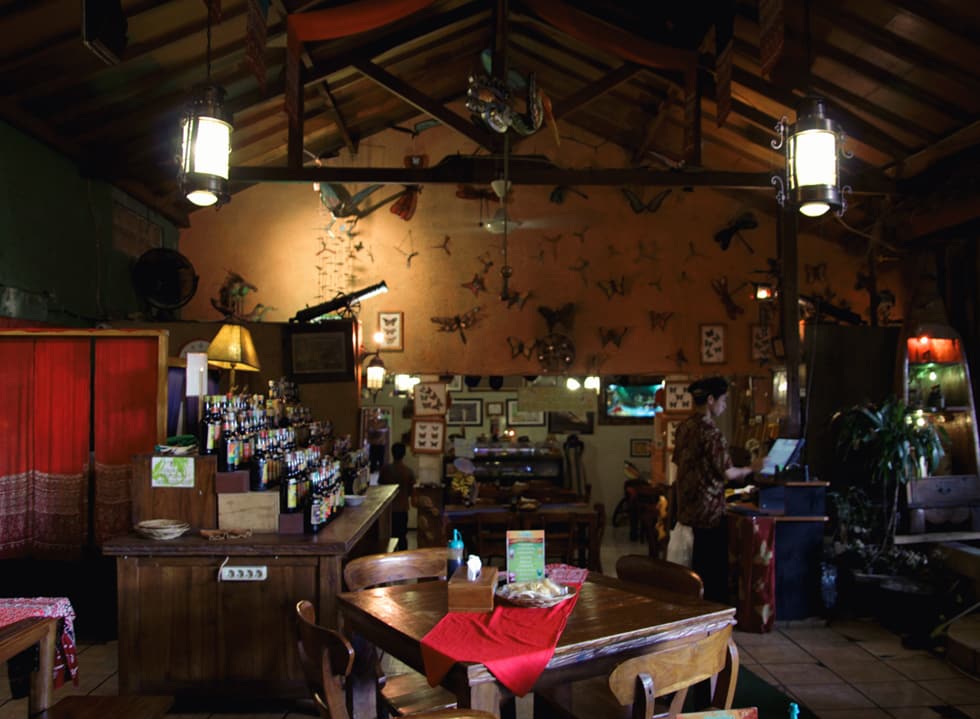 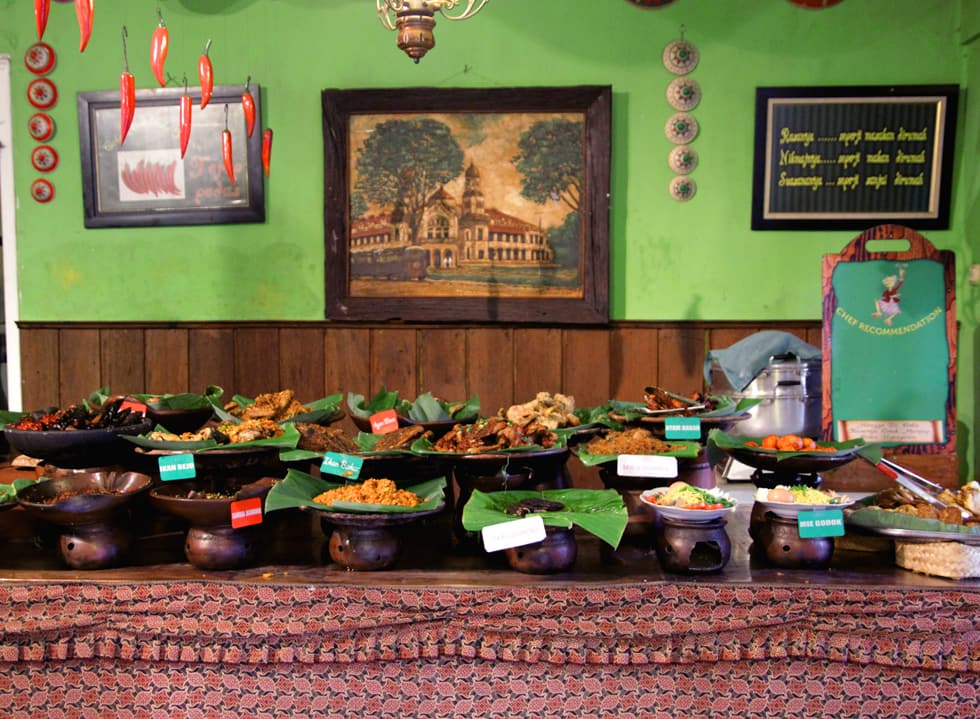 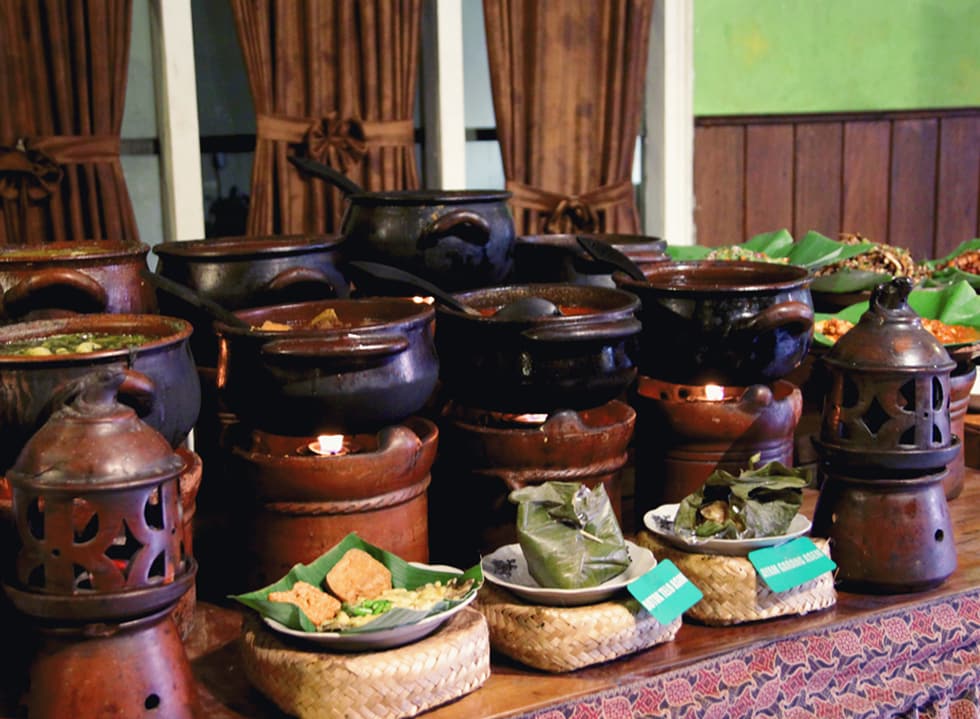 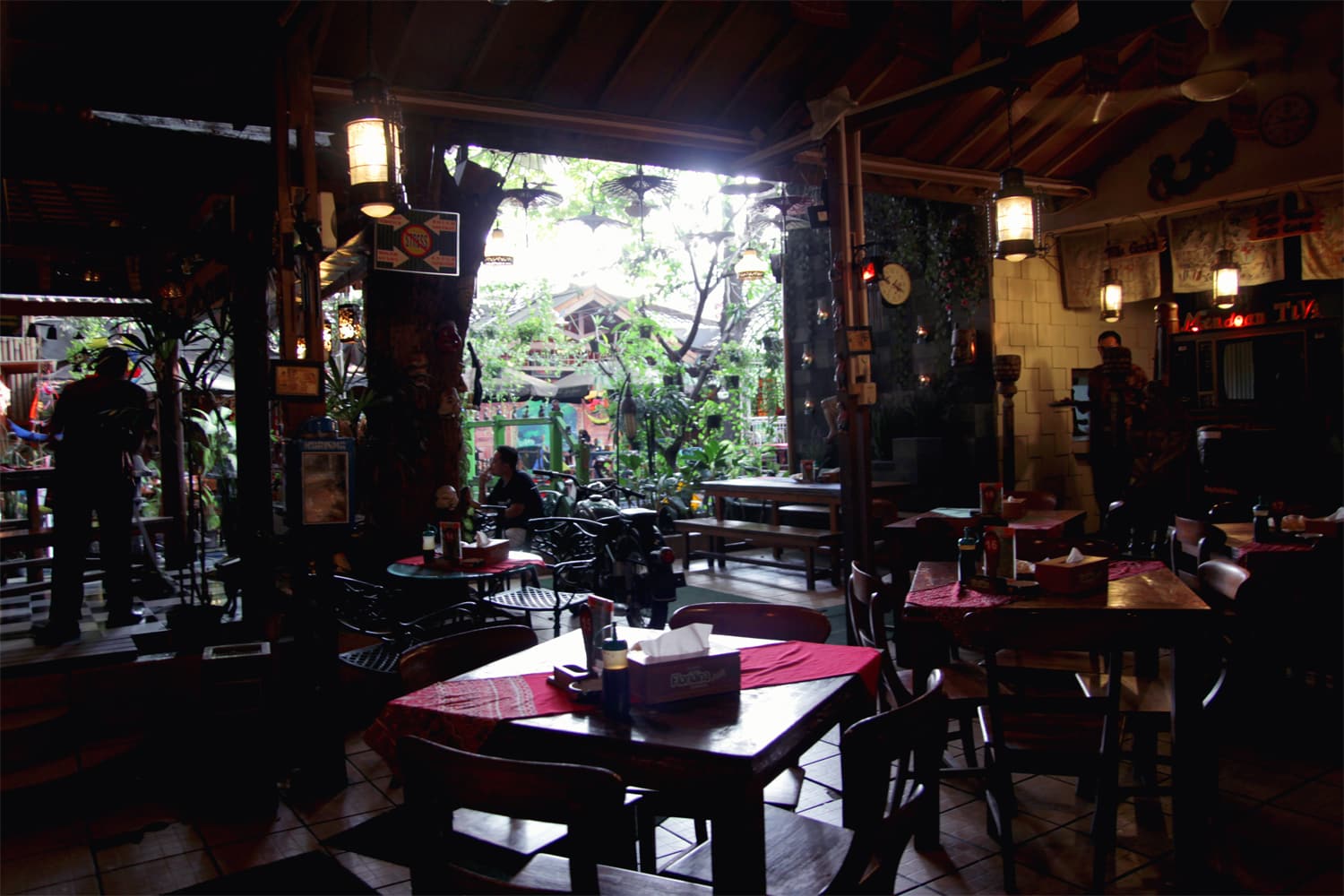 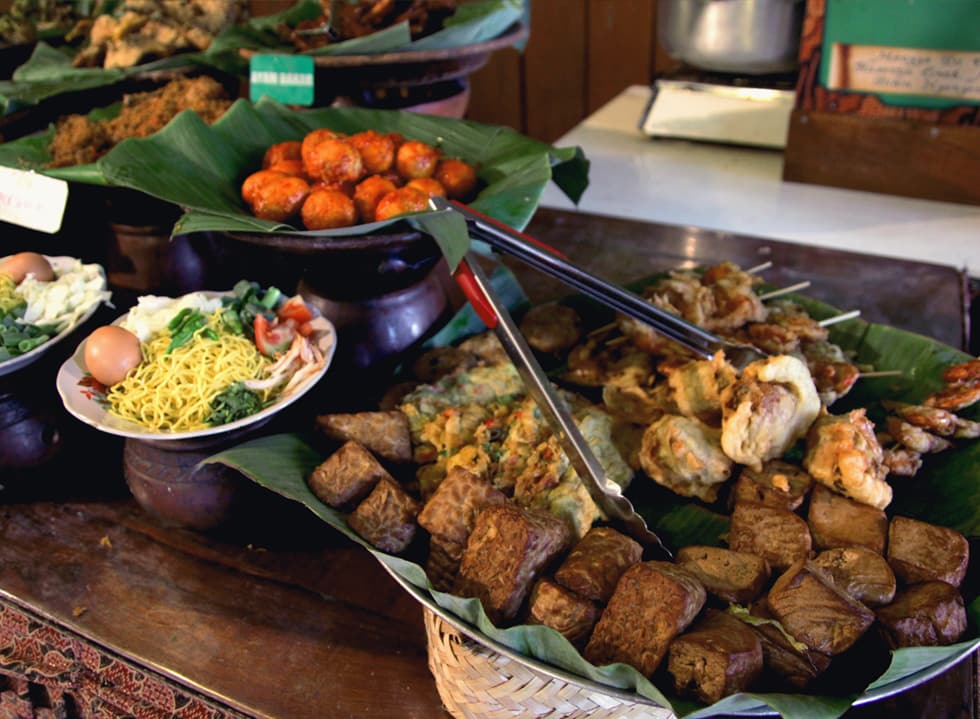 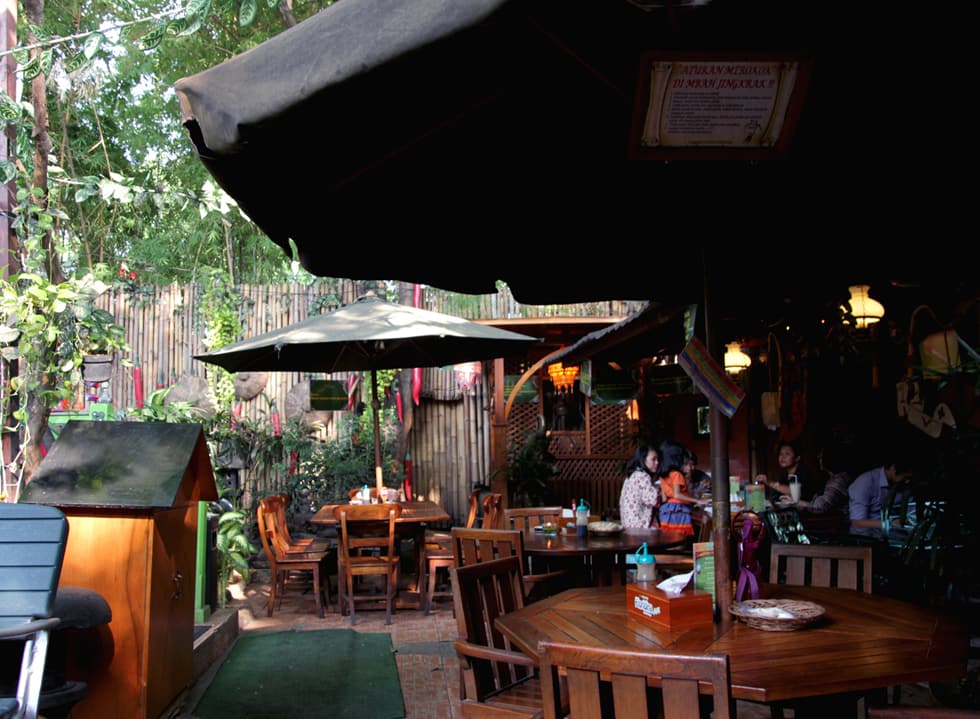 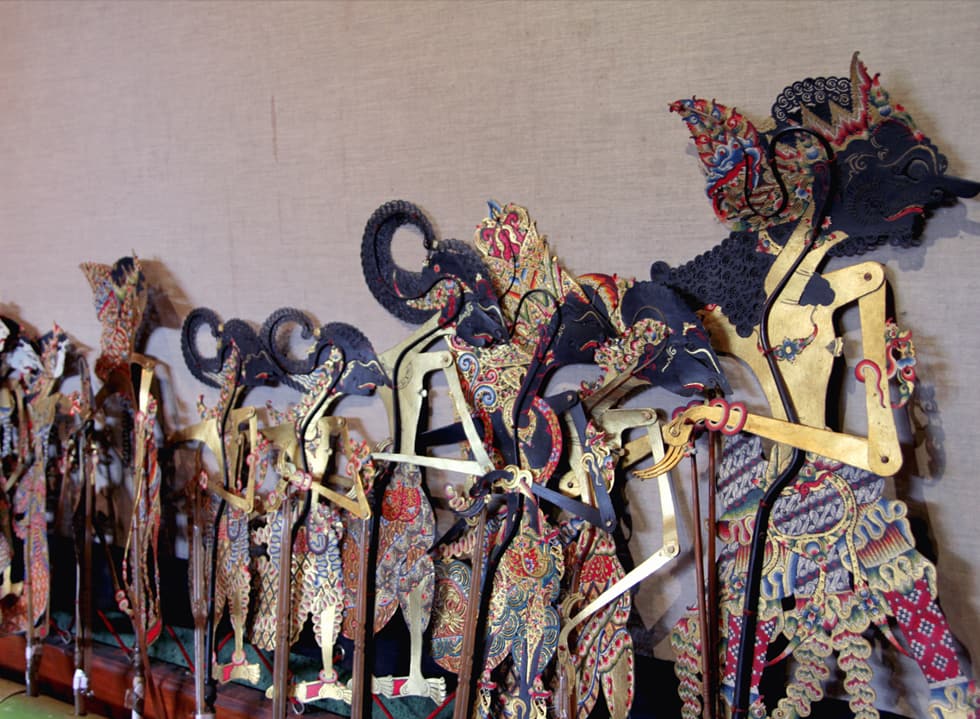 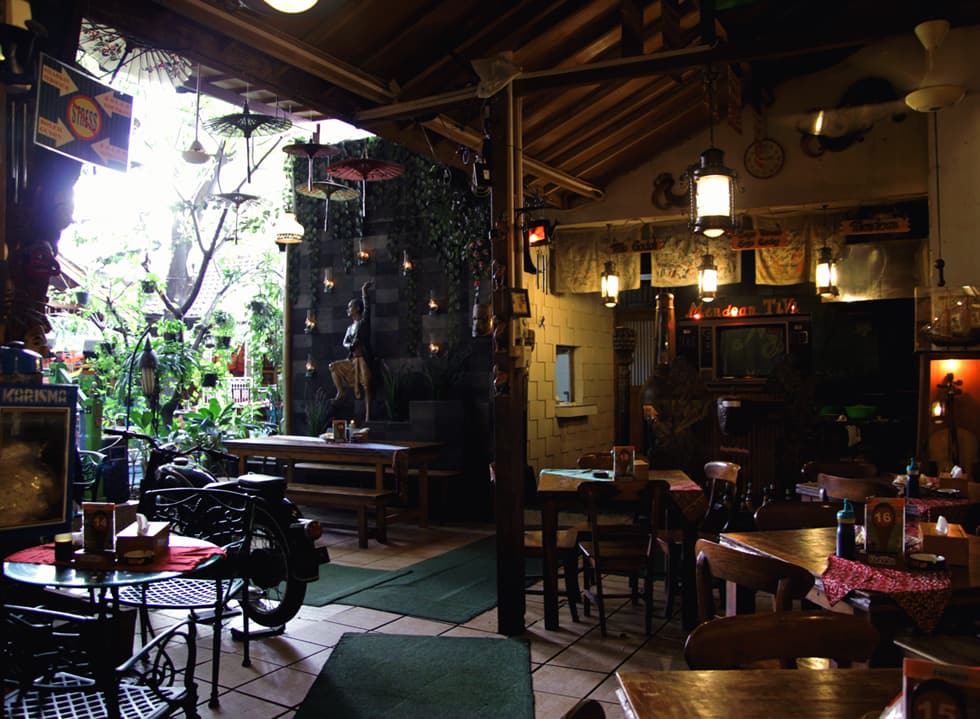 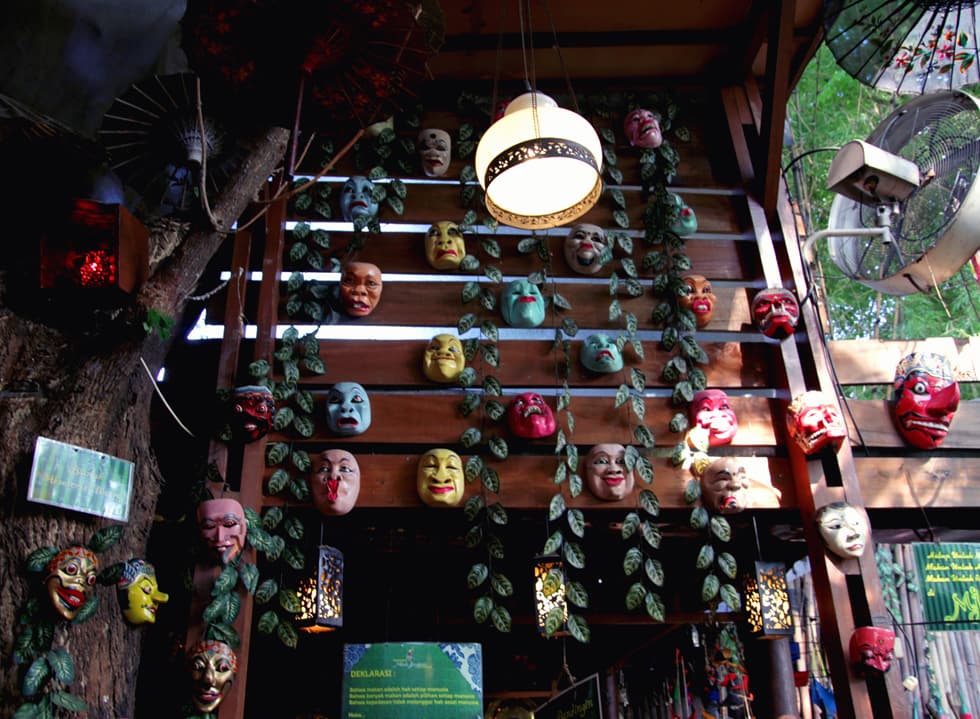 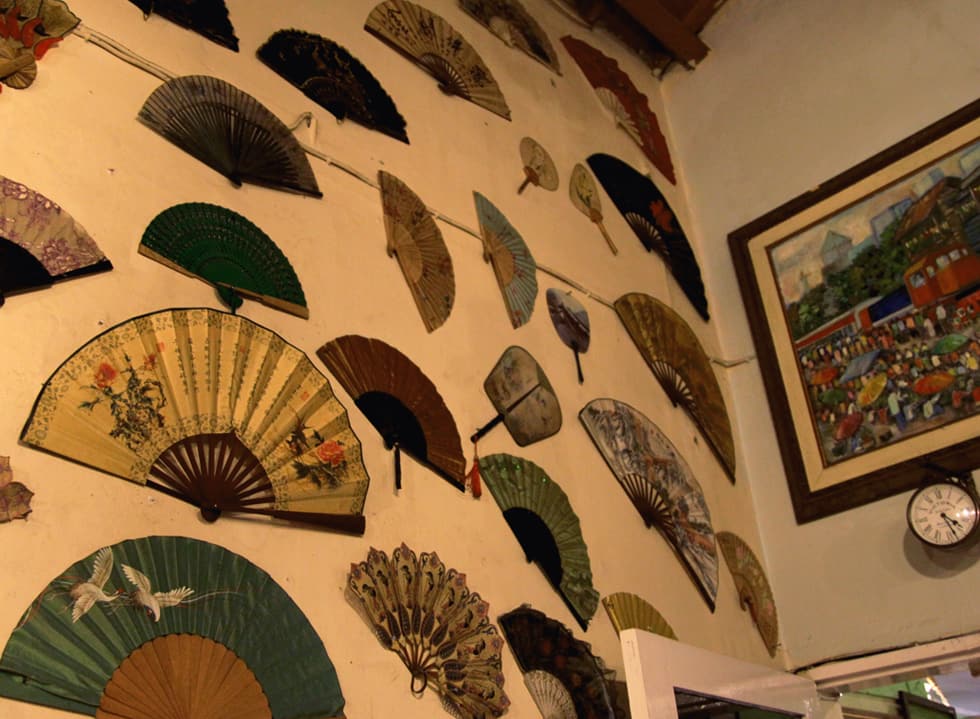 It’s hard to make sense of what Mbah Jingkrak is really about other than being an Indonesian restaurant, especially when you’re greeted with a slightly larger than life size statue of an old lady dancing in a state of delirious, right outside the entrance. It also didn’t help that you’re faced with rows of Indonesian food right away once putting the first (or second) step into the restaurant. By then, a server will be right by your side, patiently waiting like a butler as you point out the dishes that you’d like to be served.

But the charm of the restaurant gradually reveals itself once you’re in. It eventually feels more like paying a visit to grandparents or relatives residence. Take the outdoor area for example; there are swings, mini bridge and even pool – stuffs that one would normally associate with a backyard. Ordering food right at the entrance begins to make sense.

The thread of homeliness continues to manifest itself in the food, through the use of Indonesian literature. Food names, such as Ayam Rambut Setan (Demon’s Hair Chicken) or Es Air Mata Buaya (Iced Crocodile Tears), further illustrates the kind of imaginative stories where adults told to coax the little ones to eat or to avoid eating spicy food.

But what makes Mbah Jingkrak stands out other than its homeliness is owner Sulistyo Wimbo S. Hardhito’s collections of souvenir that sprawled across the walls and shelves. It includes soya sauce bottles from different cities of Indonesia, SEA Games mascots and even Japanese woodblock print. While the existence of many foreign elements in an Indonesian restaurant may seem odd, but it also goes on to embody the melting pot of culture that Indonesia is. 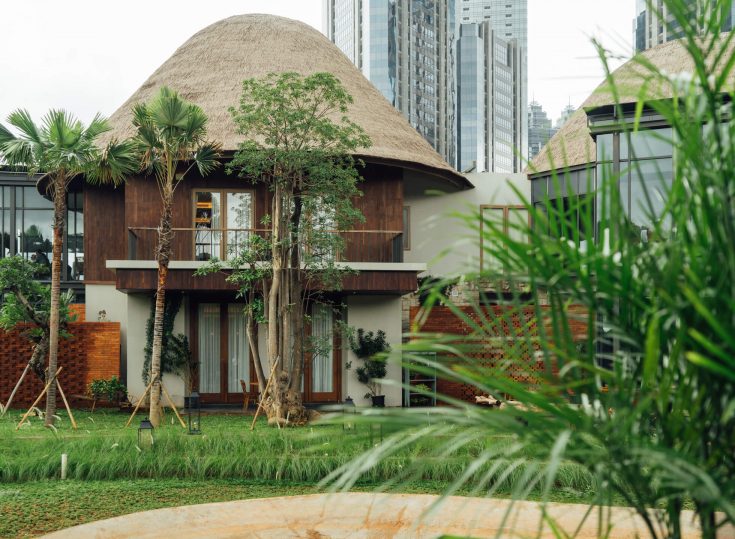 A Taste of Nusantara in Hutan Kota

Hutan Kota by Plataran's grandeur extends beyond the zesty and flavourful Indonesian food: their arresting venue in GBK sports complex offers a glimpse into the archipelago's beauty. 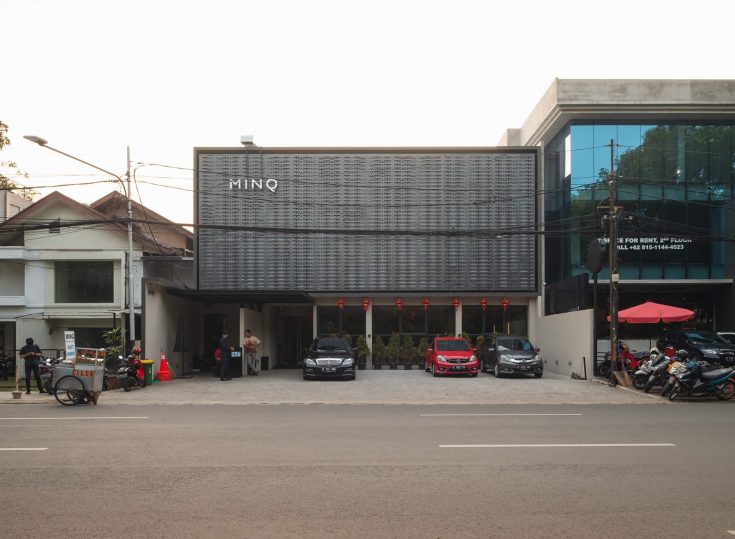 In Senopati, De La House’s newest addition MINQ takes the pressure out of choosing between dinner and drinks with contemporary Chinese dishes and signature cocktails all under one roof.

From The Lemmy to the Motley Burg, Lawless' full-throttled burgers made their way to Menteng where the joint attracts streams of customers lining up for a sinful bite.

Bringing over signature coffee and grubs, Titik Temu Coffee’s second abode in the city is a serene hidden gem at the heart of M Bloc Space’s hustle bustle.

A Remedy on Acaraki’s Table

The well-established Acaraki sets a second home in Kemang where the traditional jamu is twisted with brewing techniques one can indulge for an all-natural remedy to pair with staple Indonesian food.

Staying true to its roots, the concealed Gokul Resto at Pasar Baru offers a vegetarian Indian feast which bursts in rich and authentic flavours that will thrill even the picky eaters.