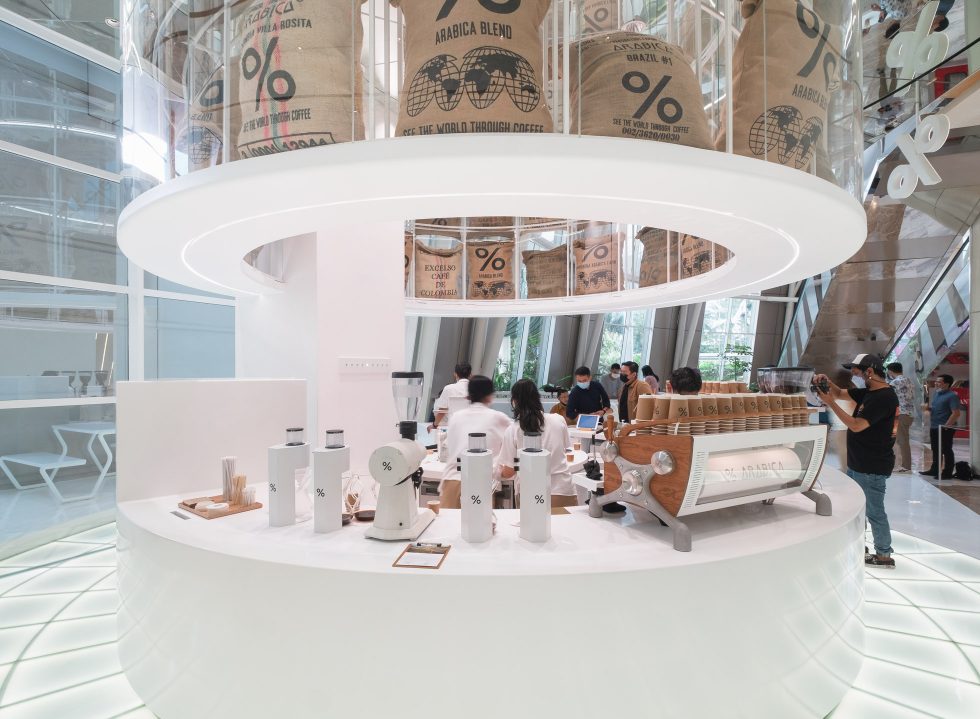 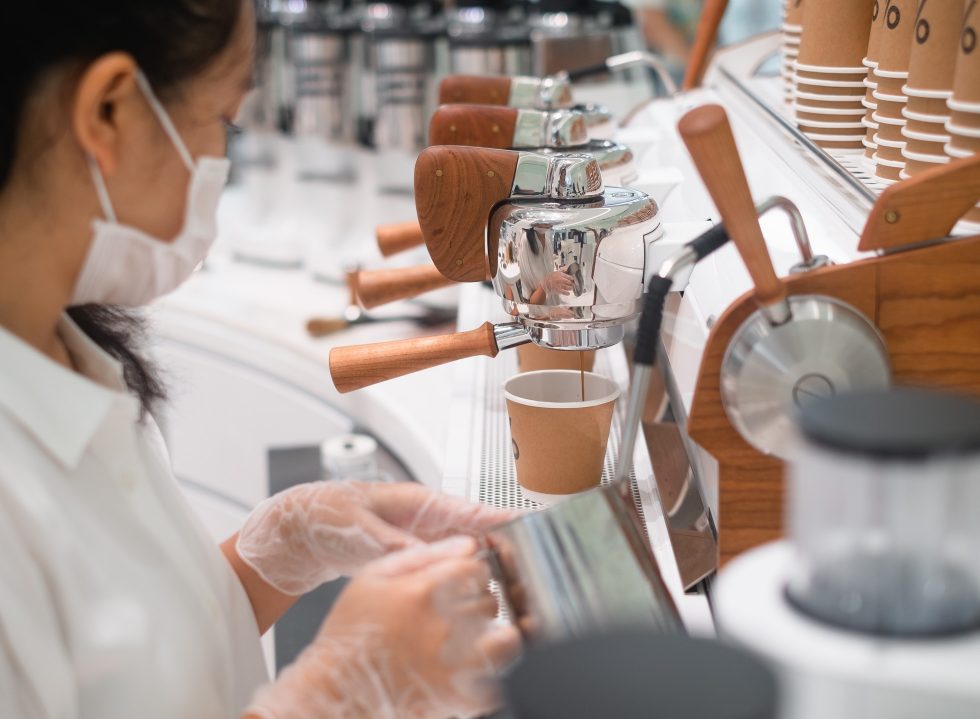 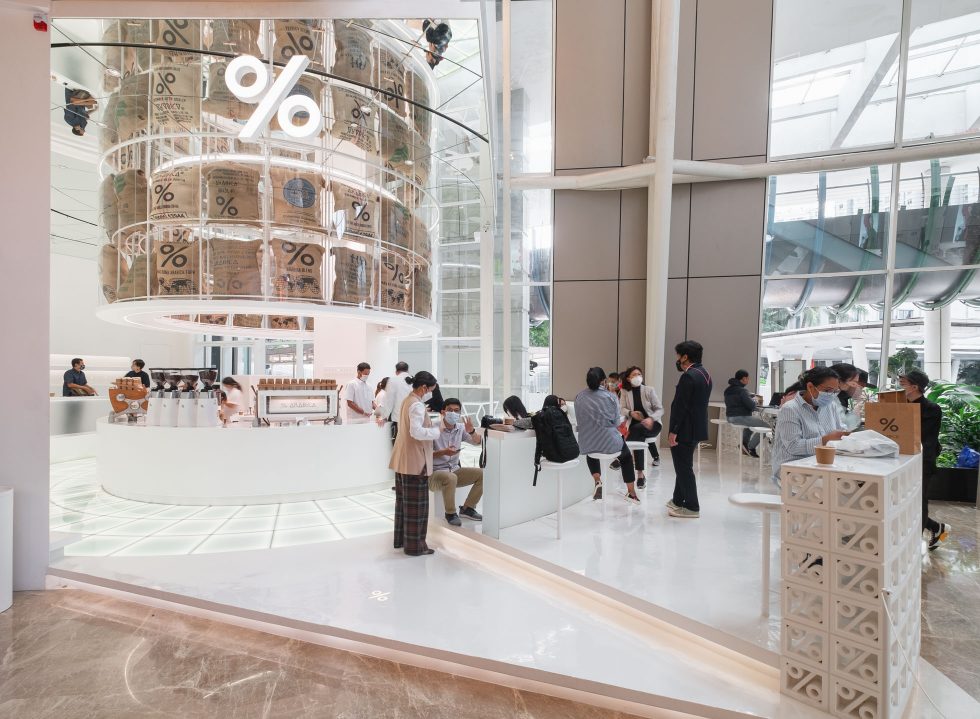 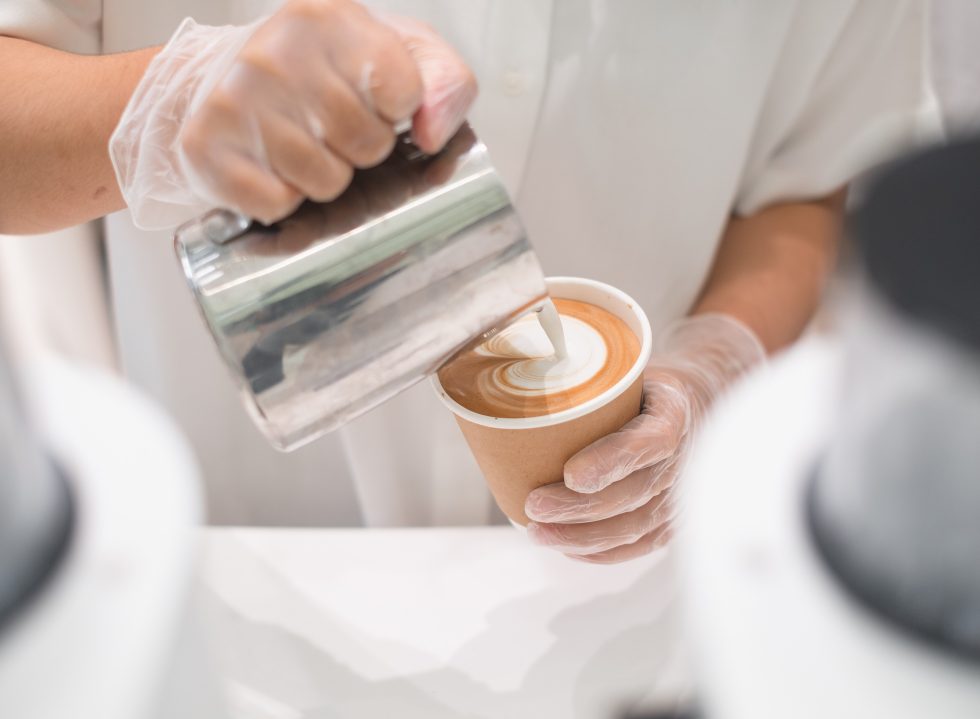 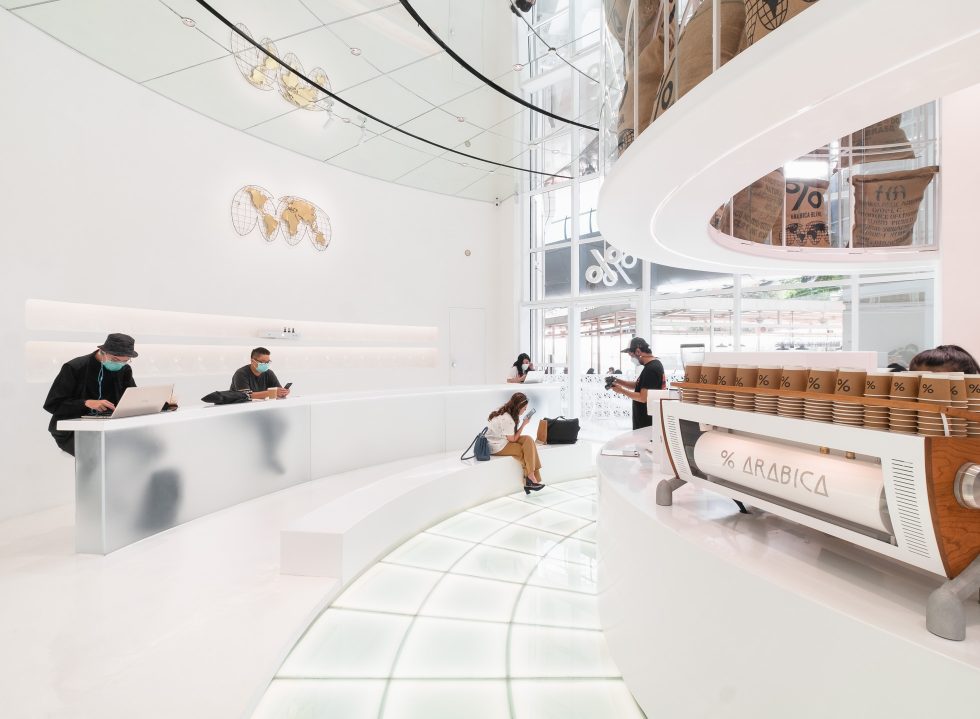 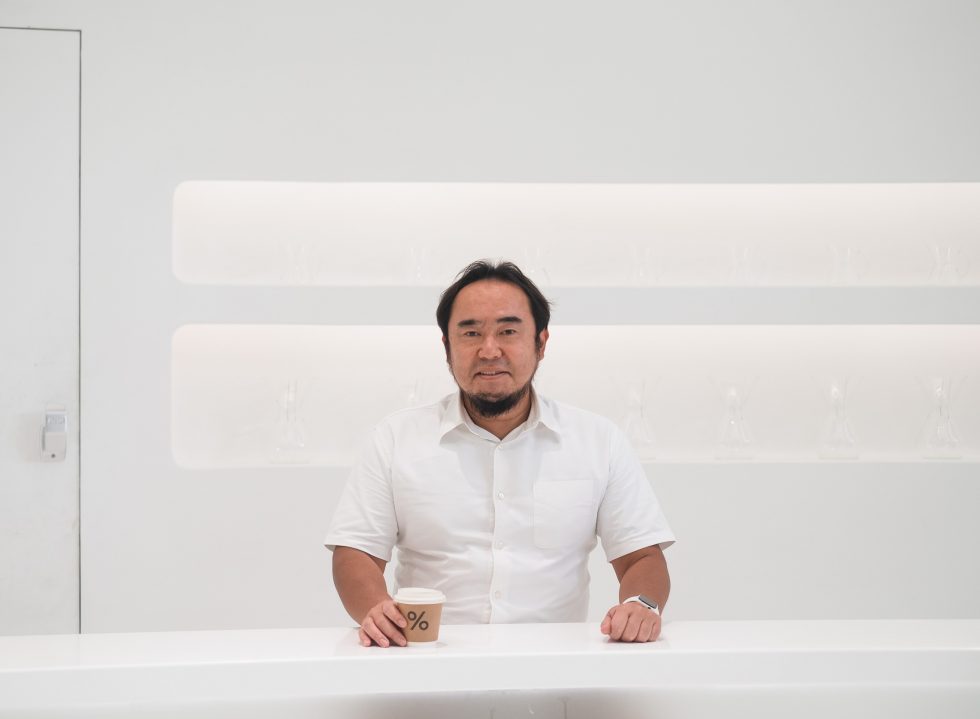 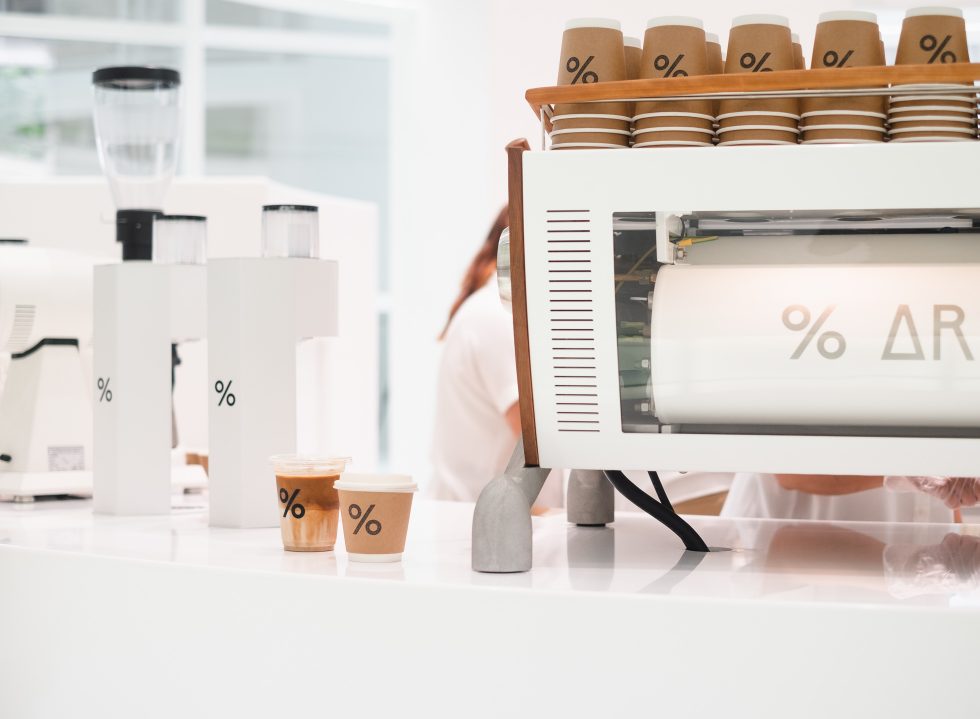 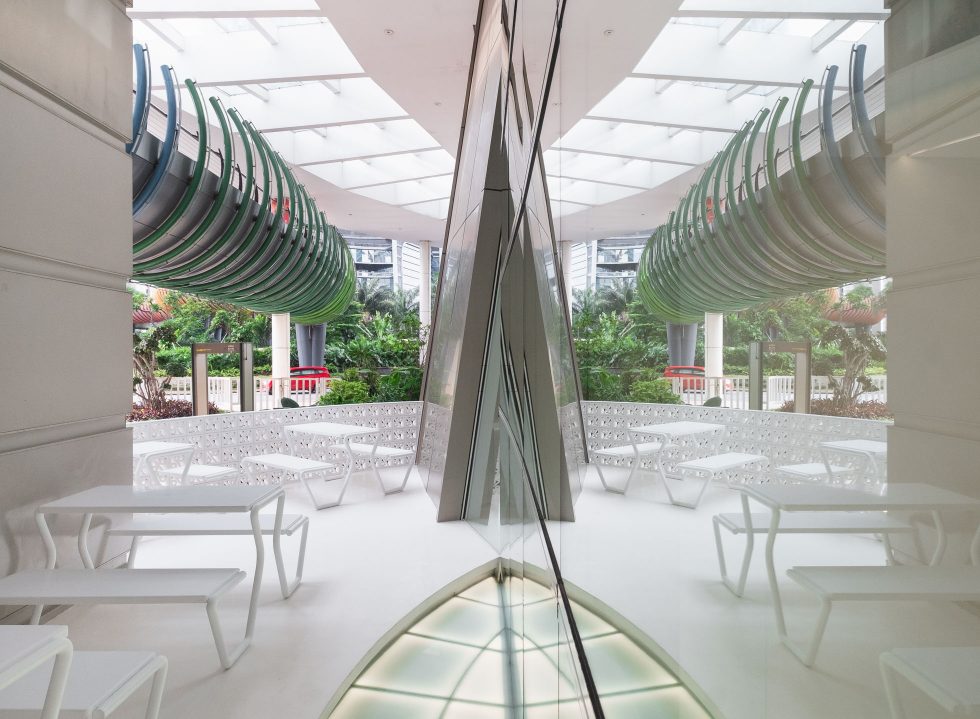 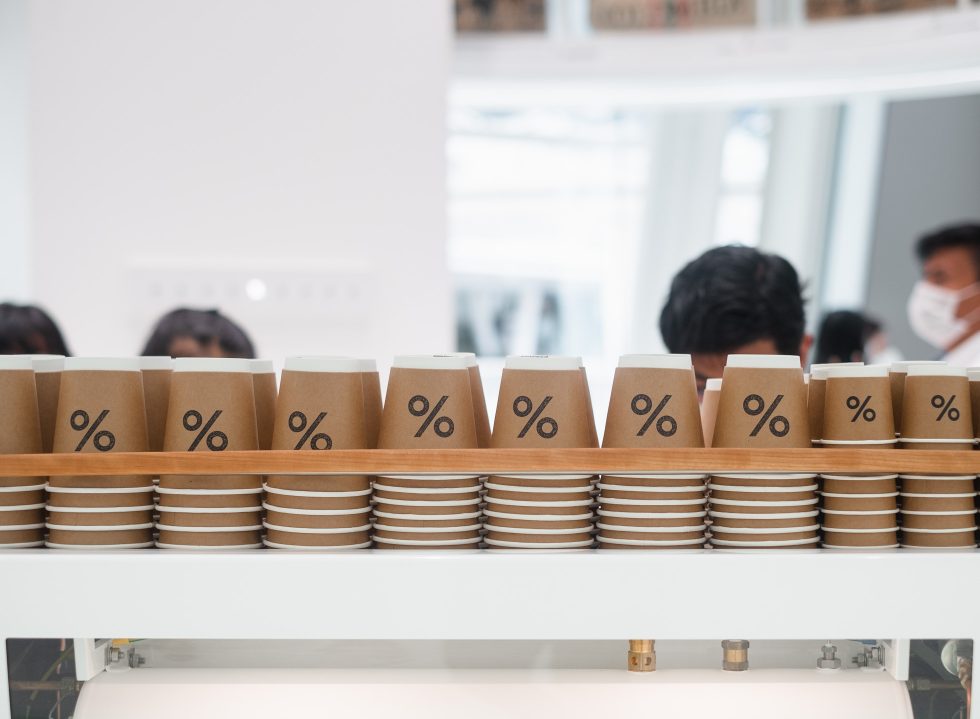 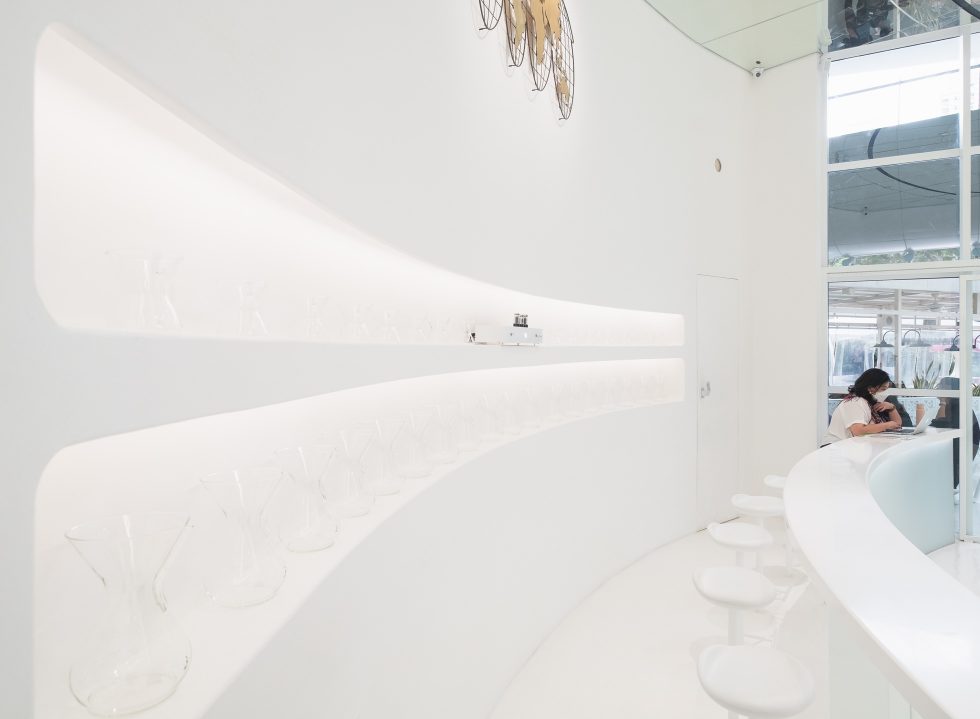 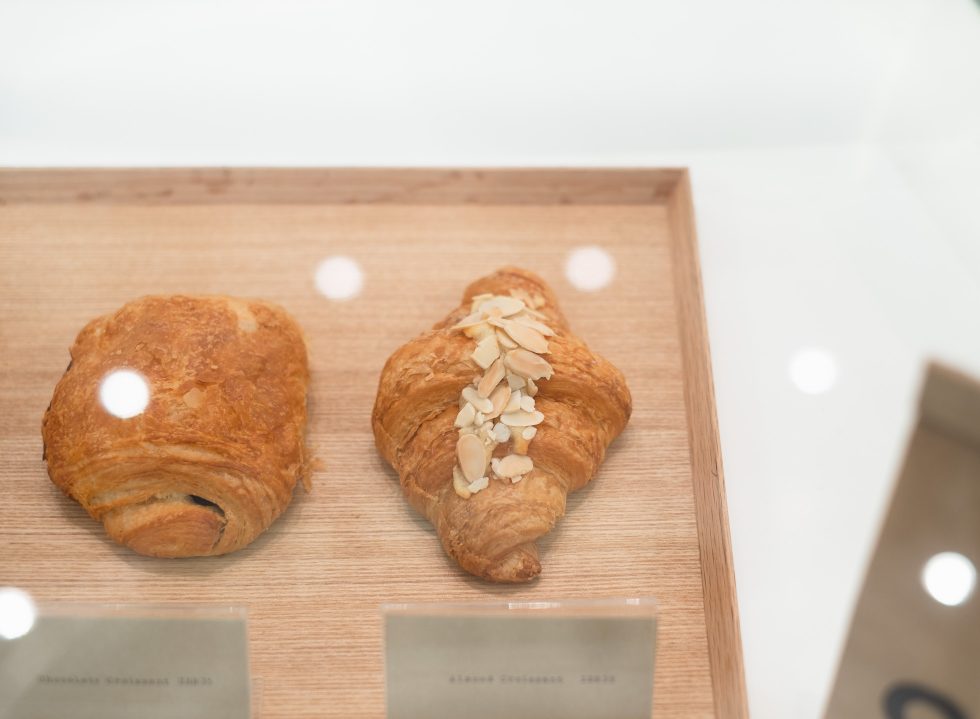 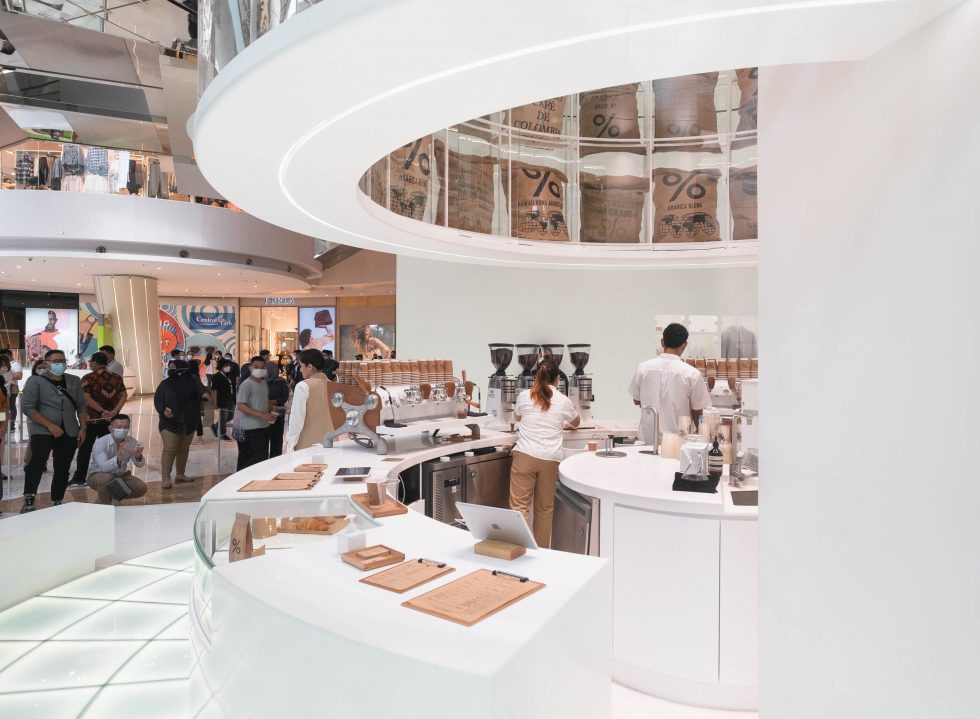 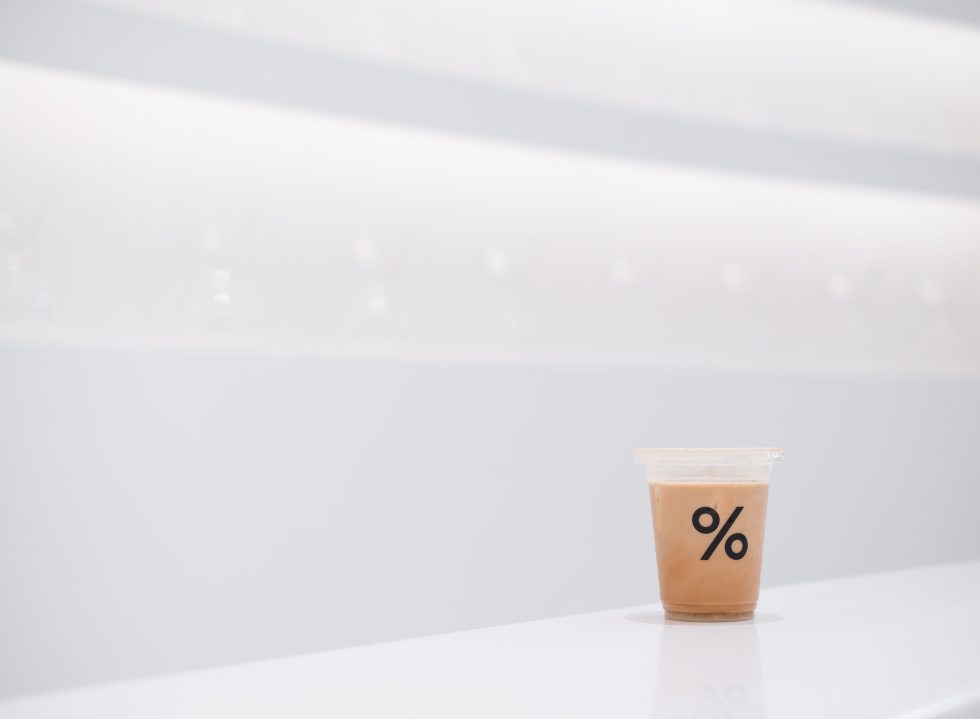 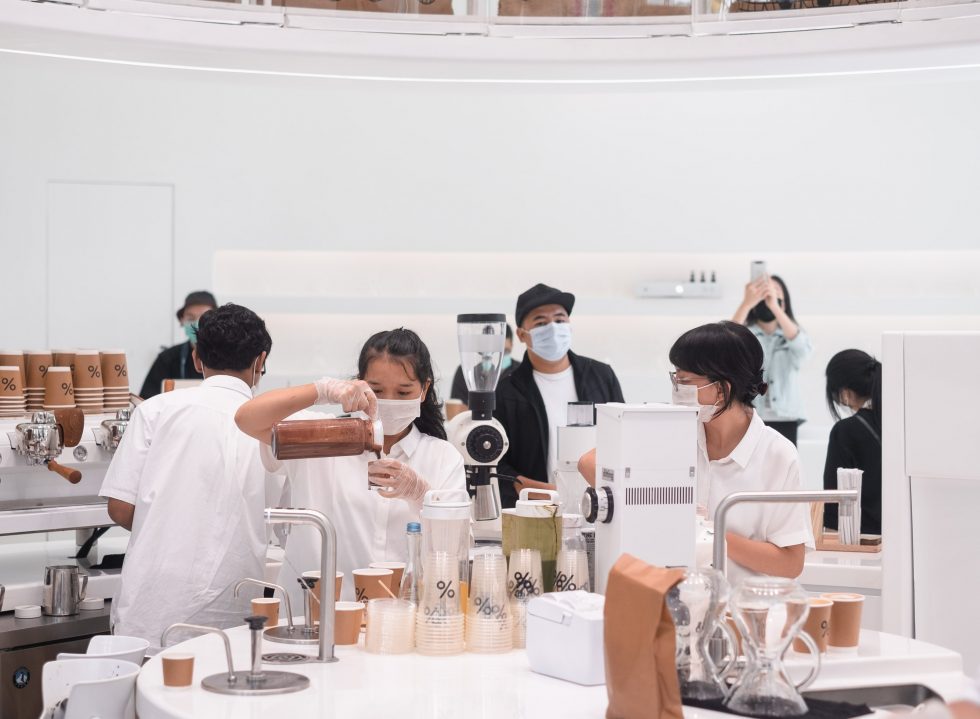 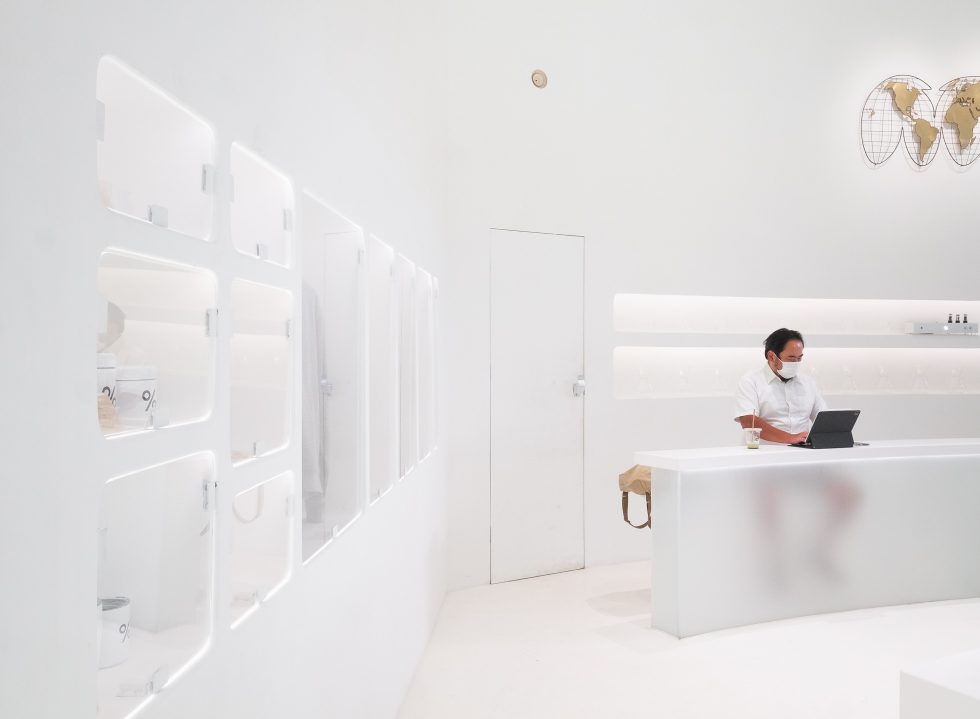 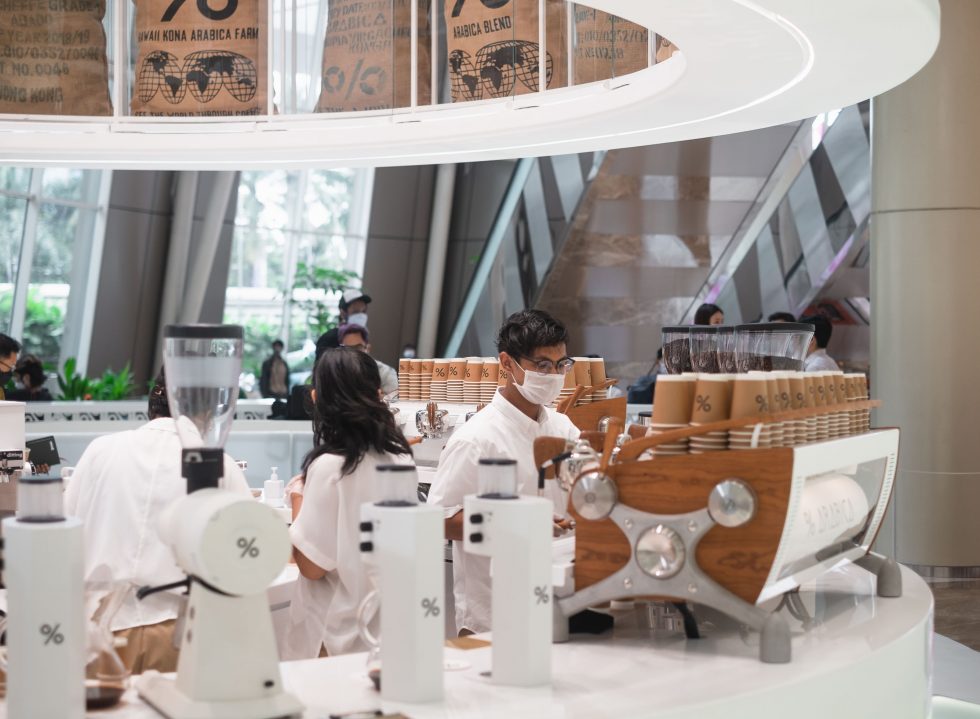 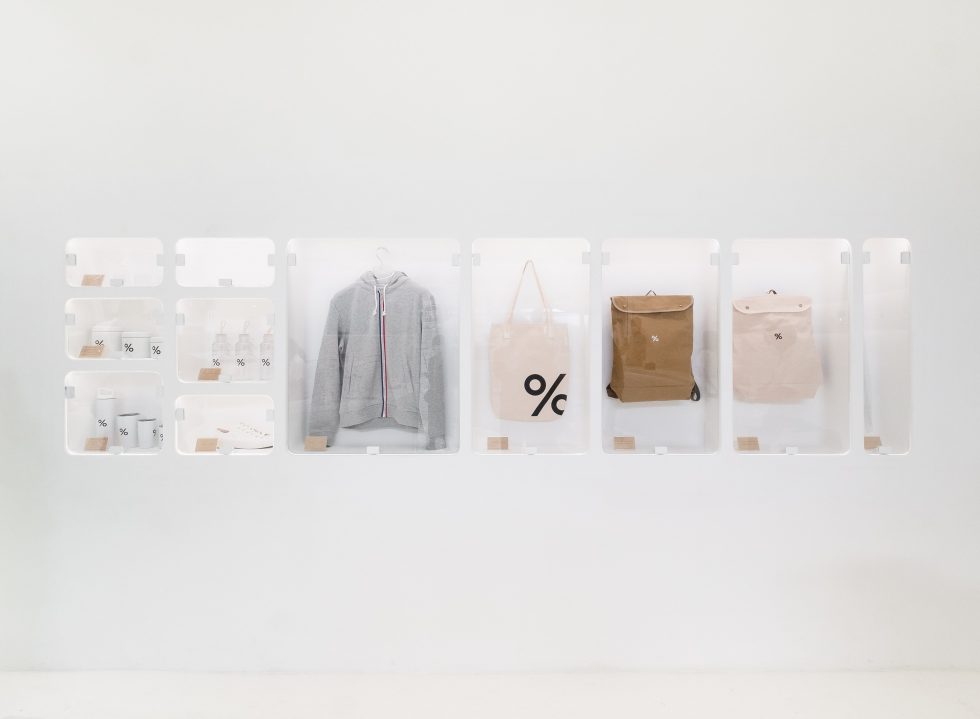 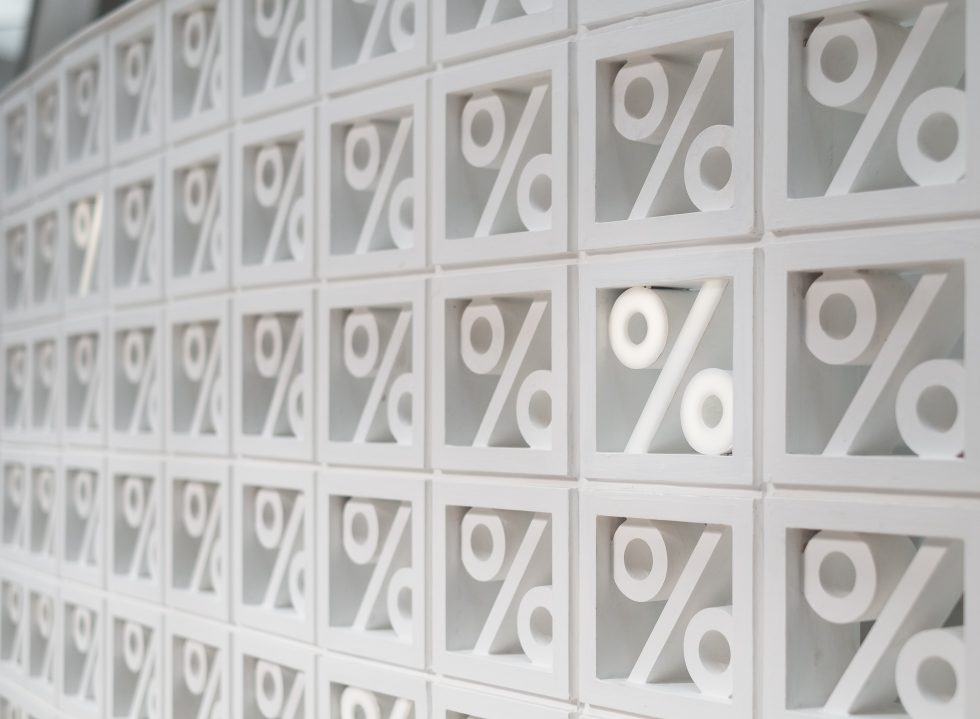 The arrival of Arabica (stylised as % Arabica) is not at all surprising, as seen from the number of enthusiasts who have been counting the days since they’ve hinted at their arrival. Now officially opened with its first Indonesian home in Central Park Mall, the household coffee shop from Kyoto sets the scene with a concise selection of coffee brews in a futuristic yet minimalistic setting—a trademark of the global brand since its inception in 2014.

The Japanese word of kenbun, which means “to see, to hear” is a way of gaining experience, a kind of attitude that Kenneth Shoji, founder and creative director, drew upon travelling the world growing up. It is also something the founder wants to imbue into the brand’s way of being, aligning with its mission of  “seeing the world through coffee”.

Situated on the mall’s ground floor, the new flagship is decked out in its signature gleaming white, as designed by the Japanese firm, Nomura Kougeisha. Elements drawn from Arabica’s other stores also made their way here, such as the towering cellar of coffee bean sacks and the world map wall art. The store’s mirrored ceiling further amplifies its futuristic feel, while the striking merch comprising tote bags and tumblers are stored neatly inside the glass cabinets. One also might notice the same music being played over and over again, another characteristic so identifiable to the brand.

Offerings here are kept straightforward, as purposely done by Kenneth who believes in the timelessness of a well-crafted menu—the kind of mentality inspired by traditional Japanese sushi bars whose menu remains unchanged for 200 years, he claims.

Of course, high quality precedes: from the brand’s single-origin beans to the use of custom-made Slayer espresso machines, Arabica serves its simple selection of brews in spades. A sucker for essentials? There are the ever-dependable Americano and drip coffees. In the mood for sweet? Try the popular Spanish Latte, a shot of espresso with condensed milk. Other creations like Matcha Latte also takes the limelight, made with the store’s self-produced matcha powder. Those feeling peckish can opt for croissants, who are also kept few with chocolate, almond and butter.

This flagship, which marks Arabica’s 80th store in 15 countries, is only the beginning of the brand’s journey on Indonesian soil, which is slated to open in three other locations. While offerings may not be a spread, Arabica turns to perfecting a lasting quality instead, which with its strong brand identity, has successfully captured a global following.

“Let’s just be simple: source the best beans, use the best machines, train our baristas to achieve their highest level and simply serve the same coffee every day,” Kenneth ends.