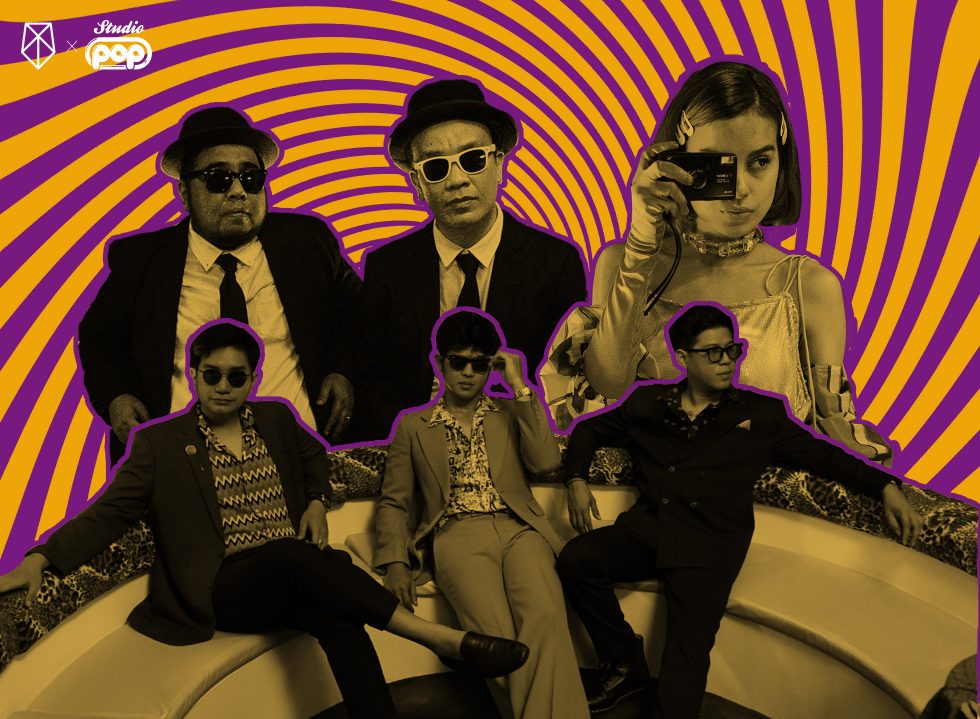 Share
Unfolding Studio Pop’s debut project, ‘CHRISYE’ by Diskoria Selekta and LALEILMANINO featuring Eva Celia, Merdi Simanjuntak and Anindyo Baskoro (Nino) talk about the thrills-and-spills behind the making of this collaboration, their love for the maestro and preserving Indonesian Pop music.

If you’ve seen Studio Pop’s final episode of their first project, then you know that Diskoria Selekta and trio producer LALEILMANINO do not take Indonesian disco-pop lightly: revealing Studio Pop’s first-ever collaborative work, ‘CHRISYE’, featuring musician Eva Celia, the track’s music video is gilded with pops of colours and retro visual cues that haul us back to the bouncy and lively period where Indonesian Pop was at its height, thanks to director Gianni Fajri and the star of the clip, artist Adjie N.A., who embody the moves-and-grooves of the disco era while dancing to Eva, dolled in neon-coloured satin dresses and fashion gloves, throughout the video.

A tribute to the maestro himself, CHRISYE is imbued with musical hints that pay homage to the late artist’s works, taking form in 24 titles of Chrisye’s songs that permeate through the lyrics and musical notes reminiscent of his songs. The project itself is an effort by Diskoria Selekta and LALEILMANINO to keep true Indonesian Pop alive, as well as a token of respect and appreciation for the early pop icons (whose creations remain fresh in Diskoria and Laleilmanino’s memories) that have brought Indonesian music to where it is now.

In collaboration with Studio Pop, this article unveils Manual Jakarta’s conversation with Merdi Simanjuntak of Diskoria Selekta and Anindyo Baskoro of LALEILMANINO on the making of Studio Pop’s recently launched debut project, CHRISYE, and their hopes and expectations for the local music scene.

Manual Jakarta (MJ): Congratulations on the new release! What was the onset of this collaboration? How did it start?

Merdi Simanjuntak (MS): Well, Diskoria is a DJ duo that plays disco-pop music, but writing is not our strongest suit. We know about the music and the songs, but to produce one we knew we would need a producer that really understands the nuances of the genre. LALEILMANINO, to us, are the top-of-the-game. Diskoria built the concept and LALEILMANINO translated it into reality.

MJ: And how did you work that out in under 24 hours for the Studio Pop challenge?

Anindyo Baskoro (AB): While the challenge was 24 hours, we divided it into two days, each day starting right around lunchtime and all the way until 10 o’clock at night. We actually ended up completing this in about 17-18 hours total. But the real pressure was to create from scratch, without any existing composition. On D-day, we were informed that the song will be titled CHRISYE, as a tribute to the musician. So we imagined, what could we do? Finally, we were set on using different musical essences taken from Chrisye’s songs from era to era. And for me as the lyricist, I was inspired to use 24 track titles by Chrisye into a new storyline. Actually, in the chorus, the first letter of each line will form the acronym of CHRISYE.

MJ: We saw and that was super clever! But whose idea was it to make a song for and inspired by Chrisye?

MS: As Diskoria, we kind of always knew we wanted to tribute this one for Chrisye because he was our local hero in pop music. There have been so many good and well-done music covers of his songs as a tribute to him, but never a dedicated work for him. The idea just stuck and we knew it would have been cool if there were one.

MJ: And how do you think Nino, as the lyricist, delivered?

MS: We already knew we could trust him and the team [laughs]. To pull off something like that, I mean, you can see in one of the episodes on Studio Pop that we were super happy and excited to see him pouring out lyrics like that.

MJ: How about the making of the tunes and beats? That couldn’t have been easy.

AB: It was all co-production. With every idea, we workshopped together to develop it into a tune that’s enjoyable for all. And it was exciting for us because we love challenges. LALEILMANINO have worked with Diskoria before and every time including for this project, they permit us to “be” them for a while, to understand just exactly what they envision.

MJ: Like you were in their headspace for this song.

AB: Yeah! The process is just a lot of talking and discussing music. I mean, that’s all we ever talk about among us [laughs].

AB: He has to be [laughs]. But the question: How many of us actually try to dig deeper? For people of Merdi’s and my generation, we know Chrisye’s music beyond his mainstream songs like Cintaku or Untukku. With his lesser-known titles written into our song CHRISYE, we’re hoping younger people to get curious about them and the artist. Chrisy’s discovery is so extensive, we feel the responsibility to pass this baton to the new generation. In my opinion, the more you dig Chrisye’s works, the more you will fall in love with them.

And to be honest, we’re envious and if we had a time machine that would bring us back to Chrisye’s era, we’d go for it. It was Indonesia’s golden age in music and today we are merely products of the past and we get to learn a lot. So, really, this is our effort to continue and develop creative pop music in Indonesia. Coincidentally, the emotion of nostalgia is strong right now, so old songs resonate a lot among young people.

MJ: It’s interesting that you mention this as a deed for younger generations. Is that why you invited Eva Celia as the feature artist in CHRISYE?

MS: Exactly, we see Eva as someone who represents young people, and her lineage of gift… I mean, her father Indra Lesmana is a maestro we revere. So, we see Eva’s works have this red thread that connects her gift to the past. Kind of oldie jazz, but made modern. And it seemed interesting to introduce the twist in CHRISYE: having Eva sing about a song that celebrates a maestro from an old era.

MJ: We heard that the recording for her was also challenging because of health protocols?

MS: Yep, the recording process for Eva’s parts was done at her house, with Diskoria and LALEILMANINO supervising and directing her via Zoom. We were nervous, but it turned out so well with little improvements done.

AB: This was LDR, but not a Long-Distance Relationship, rather Long-Distance Recording [laughs]. She was definitely put outside of her comfort zone for this one. And the way Eva used her techniques to interpret and deliver this song was really exceptional, especially in such a short amount of time. She didn’t fabricate a style to carry this song and she’s always so expressive. Among everything else, I think we need to highlight her spunk for doing a challenge that’s beyond her usual style. Not once I met her directly for this project, not even for the music video (MV) shooting.

MJ: Speaking of the MV, what was the direction and concept behind it? And who was that actor starring there?

MS: We had Gianni Fajri direct it along with her team of creatives. She’s really familiar with the industry and worked on so many projects before she started a family. As an old friend, I knew we could rely on her to deliver something well-made and fast. Gianni wanted to have a figure that can take us back in time through his style, character, persona and acting for the song. With that, she had the idea of inviting Adjie N.A. for the project and we felt so lucky for having him as he’s a big and renowned acting teacher in the nation. That was downright amazing.

MJ: So that twist at the end of the MV represented that time travel journey of enjoying the music of that era? That was a smart move.

AB: You caught that! Earlier, I mentioned about a time machine and to me if we had one I’d love to visit Indonesia during the era of Chrisye and Guruh Soekarno Putra. This wasn’t LALEILMANINO’s first time working with Diskoria, but this Studio Pop project and everyone involved made me feel like I was accessing that time machine. With the creative freedom the music makers and filmmakers were given, our expressions went wild and independent of current trends in the industry. At this point, all of us simply wanted to create.

MJ: Well finally, what are your expectations for Studio Pop’s future and upcoming projects?

MS: Speaking on behalf of Studio Pop, Diskoria will definitely collaborate with more producers in the future. And honestly speaking, I consider the concept of Studio Pop quite visionary. I think whoever will end up collaborating with us for Studio Pop next will, without doubt, help today’s youth to truly appreciate and respect those who have paved the way of national music for all of us now. I’m talking about Chrisye, Chandra Darusman, Fariz RM—maybe without these stars, livelihood from music wouldn’t be as amazing or possible as it is today. These big names proved that if you work hard enough on your passion for music, your music can be everlasting. We hope Studio Pop, through its works, can re-instil the consciousness that if you love music, you do it.

In support of Studio Pop, Manual Jakarta will be tracking the journey of the platform’s exciting projects and their creative collaborators.