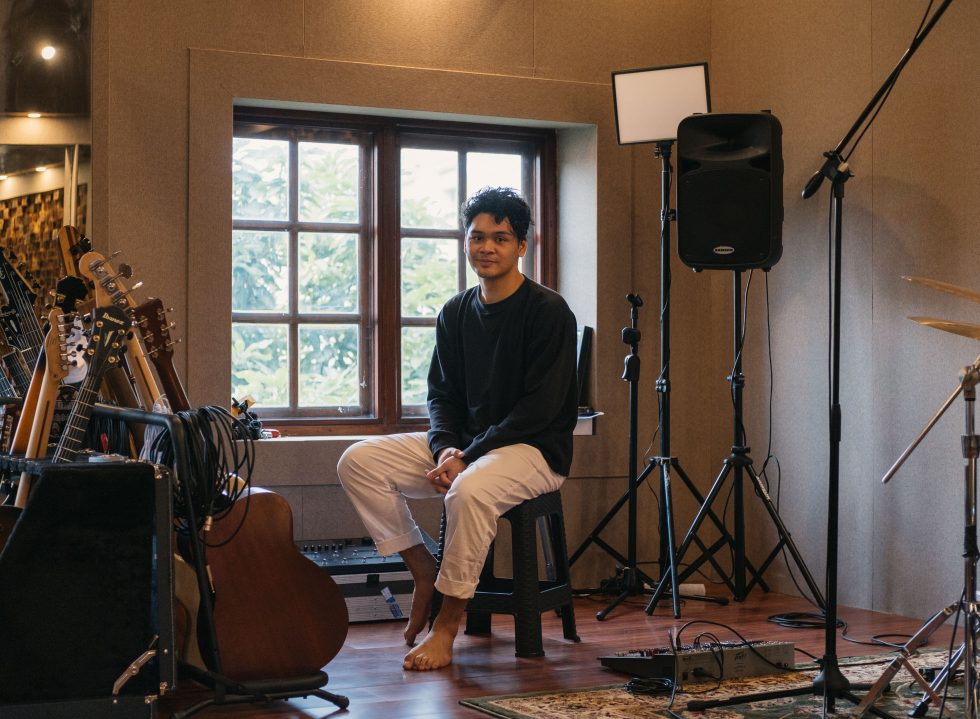 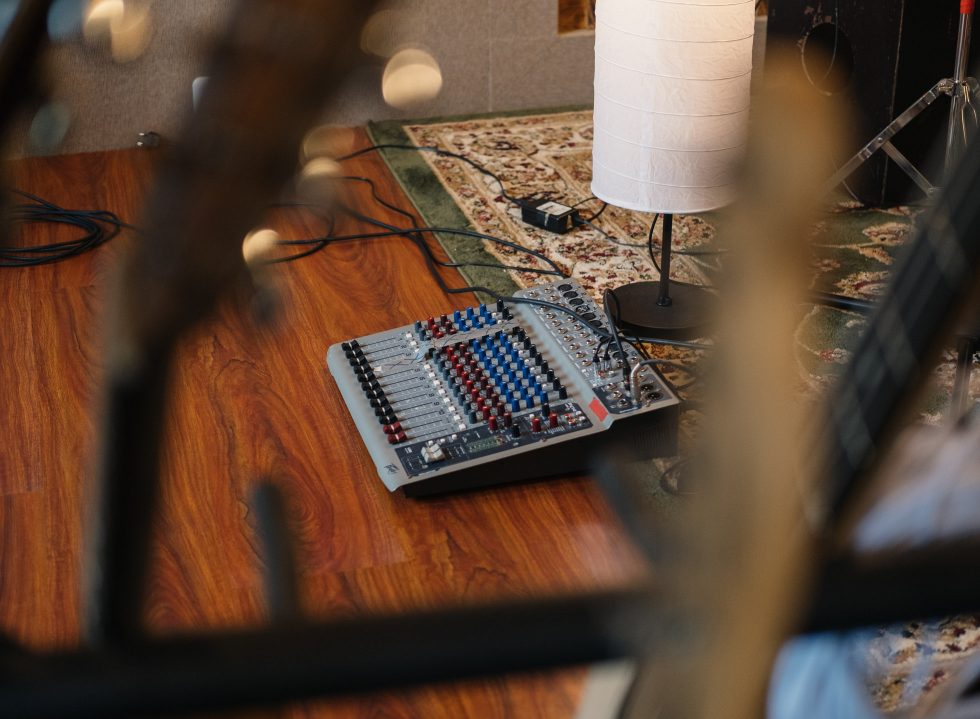 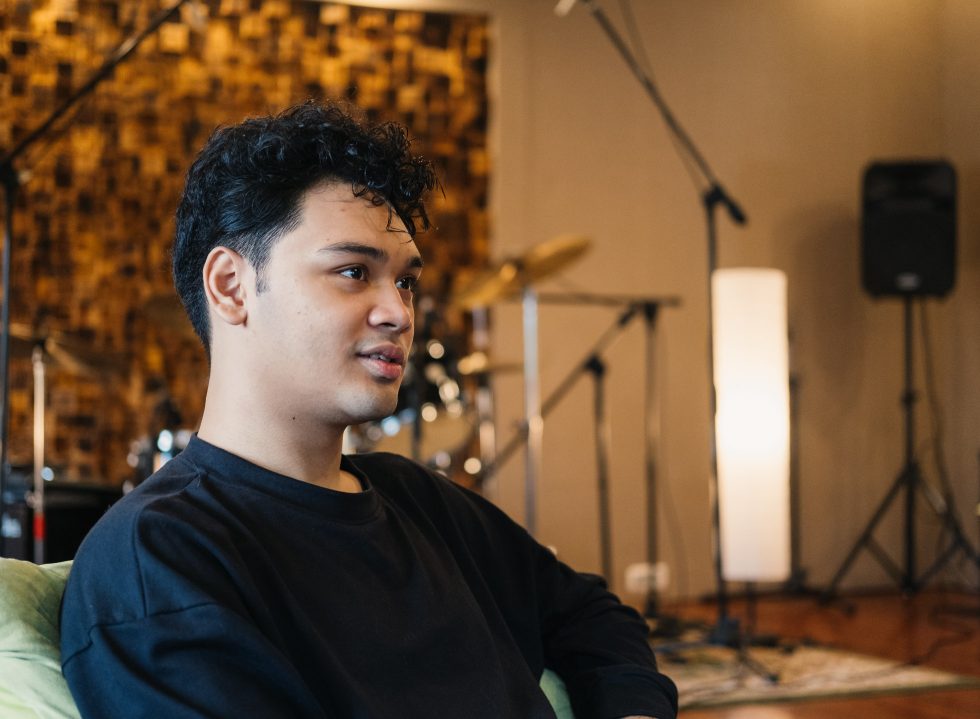 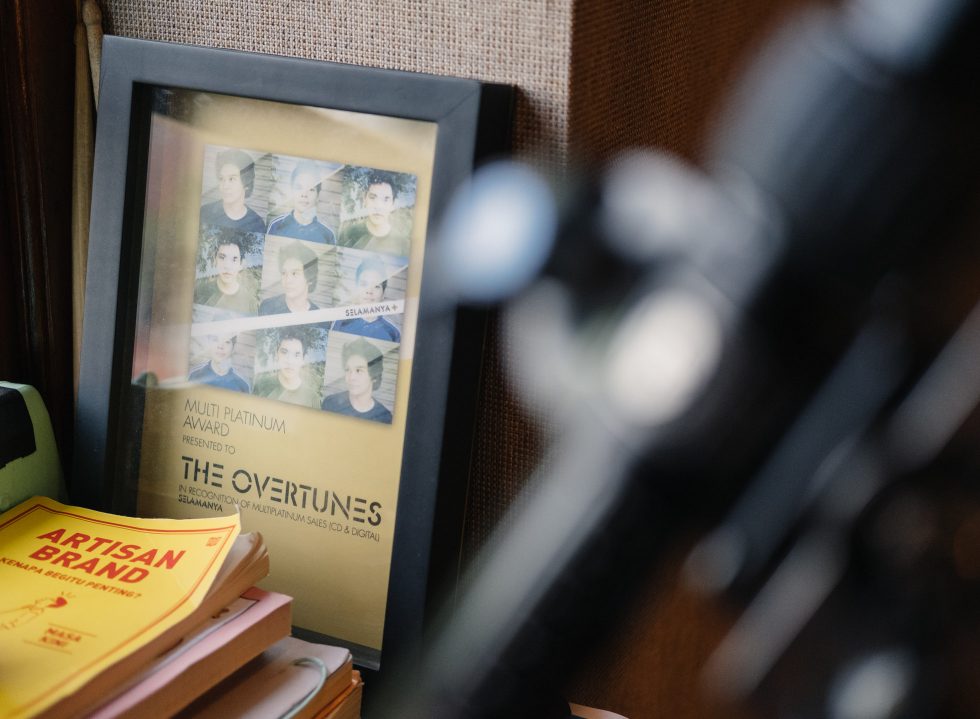 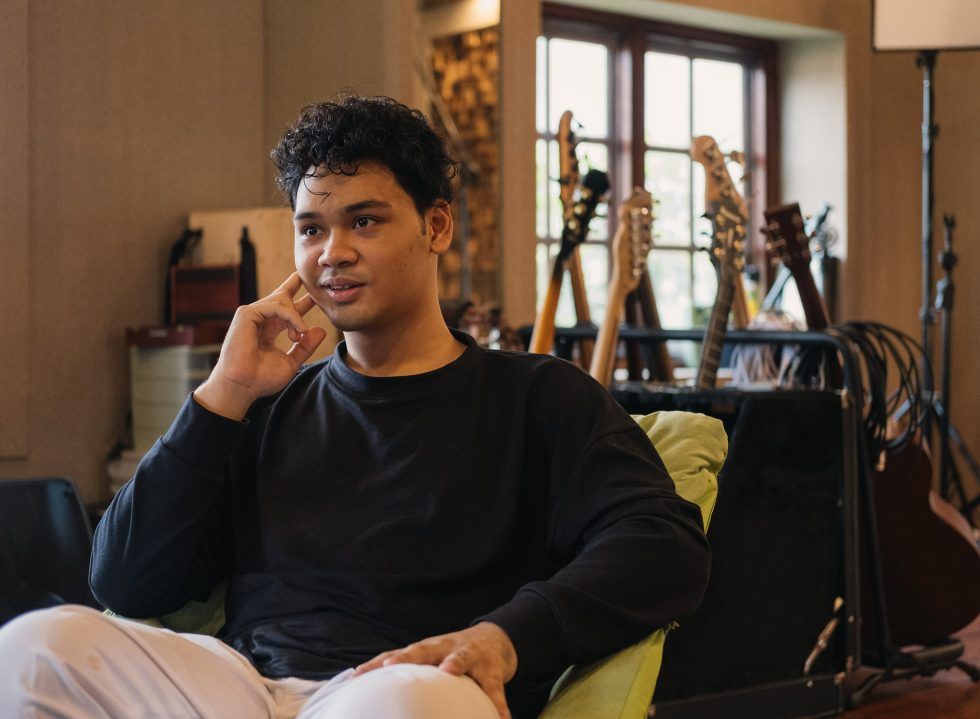 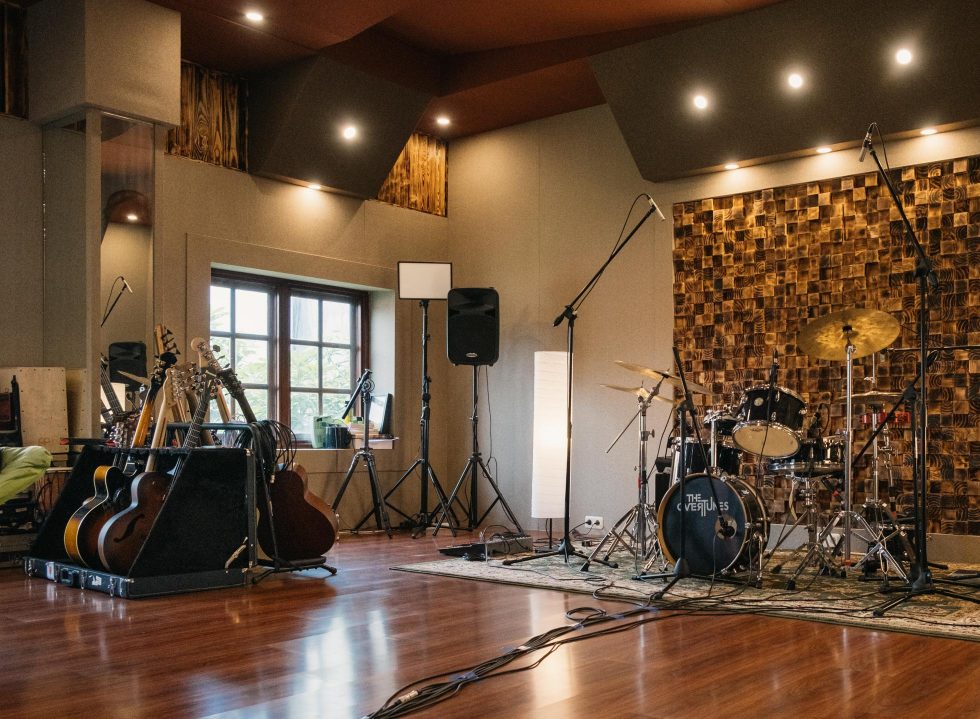 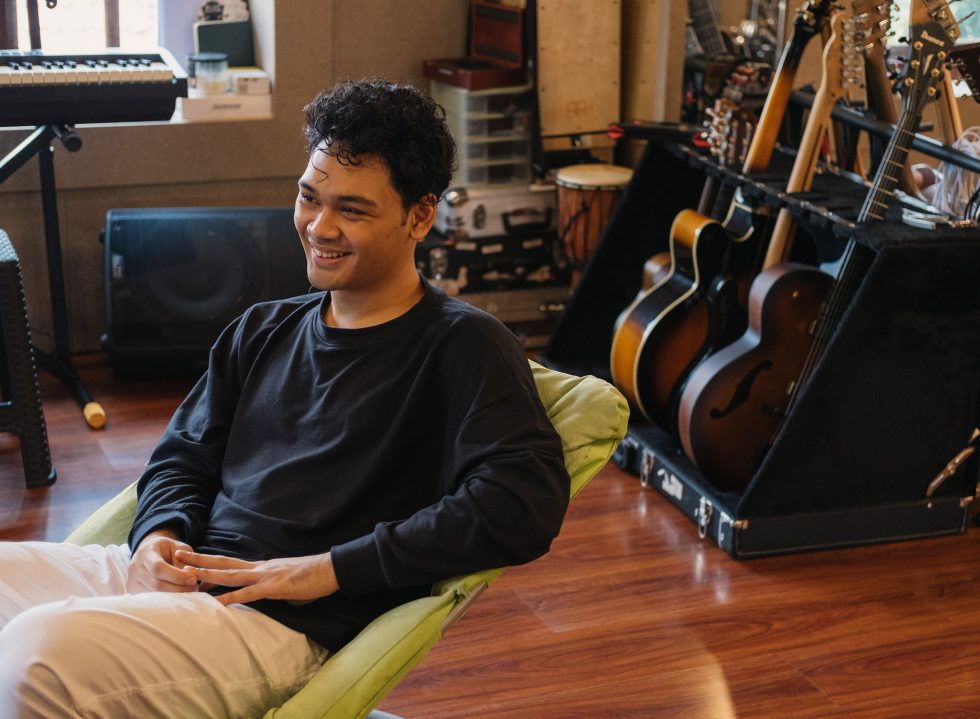 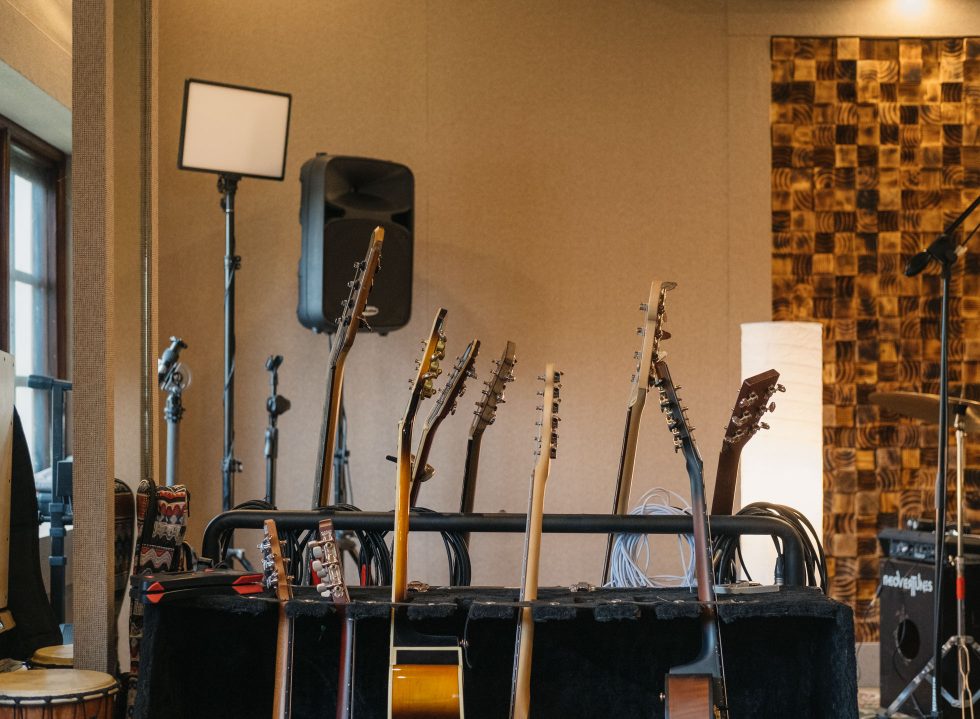 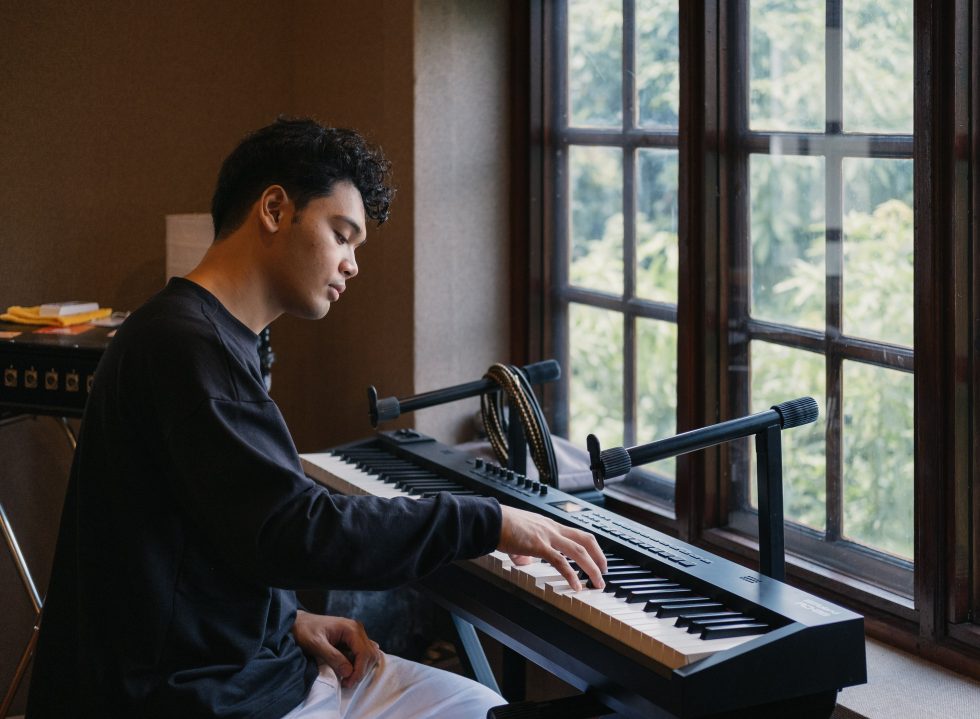 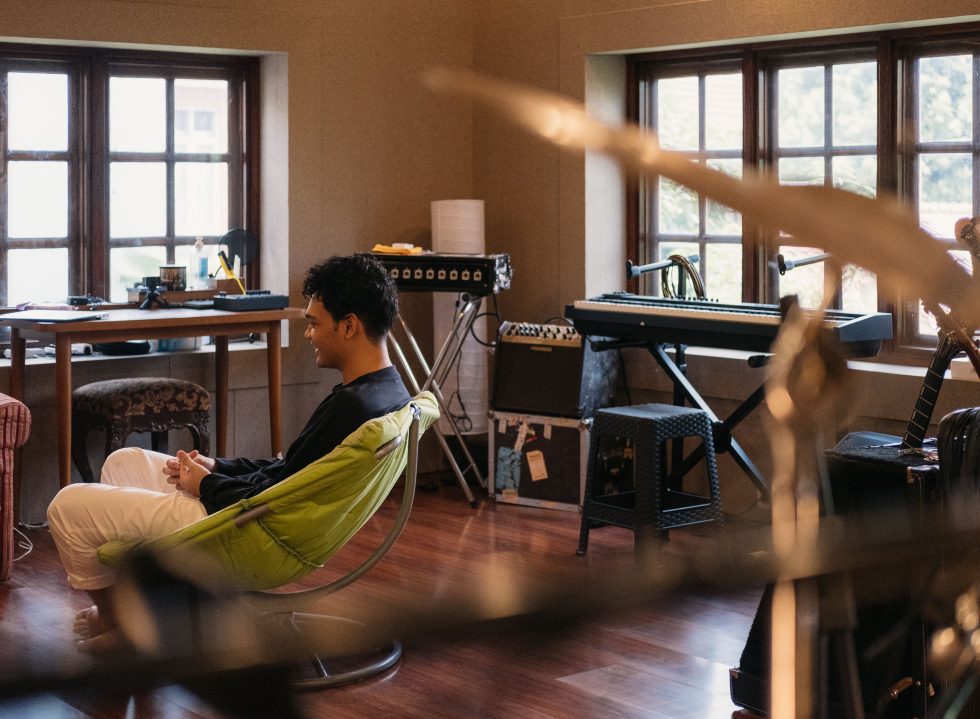 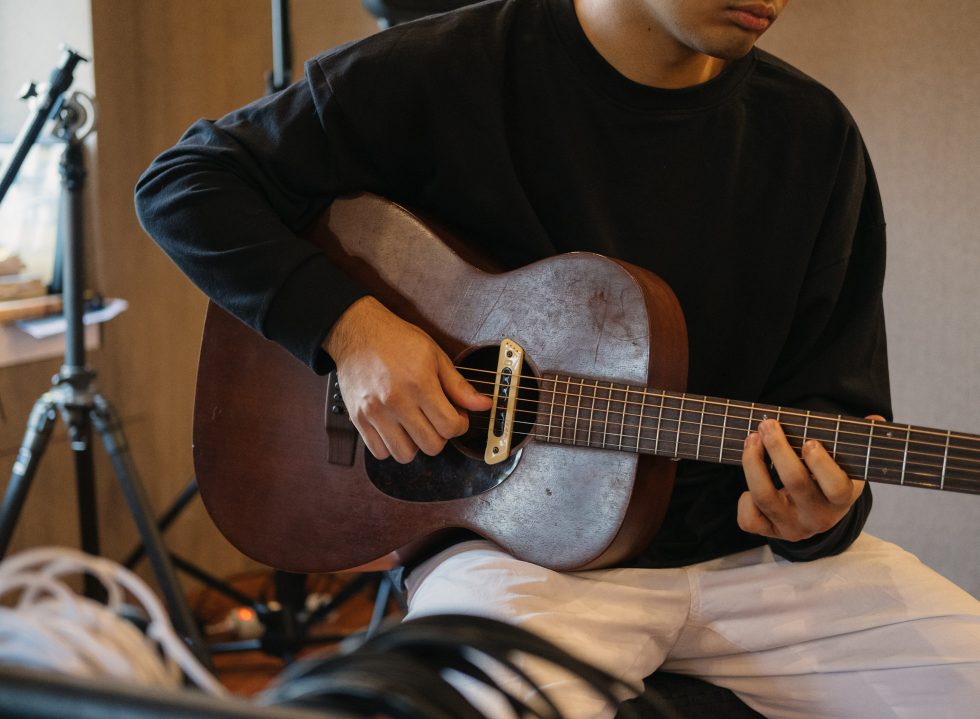 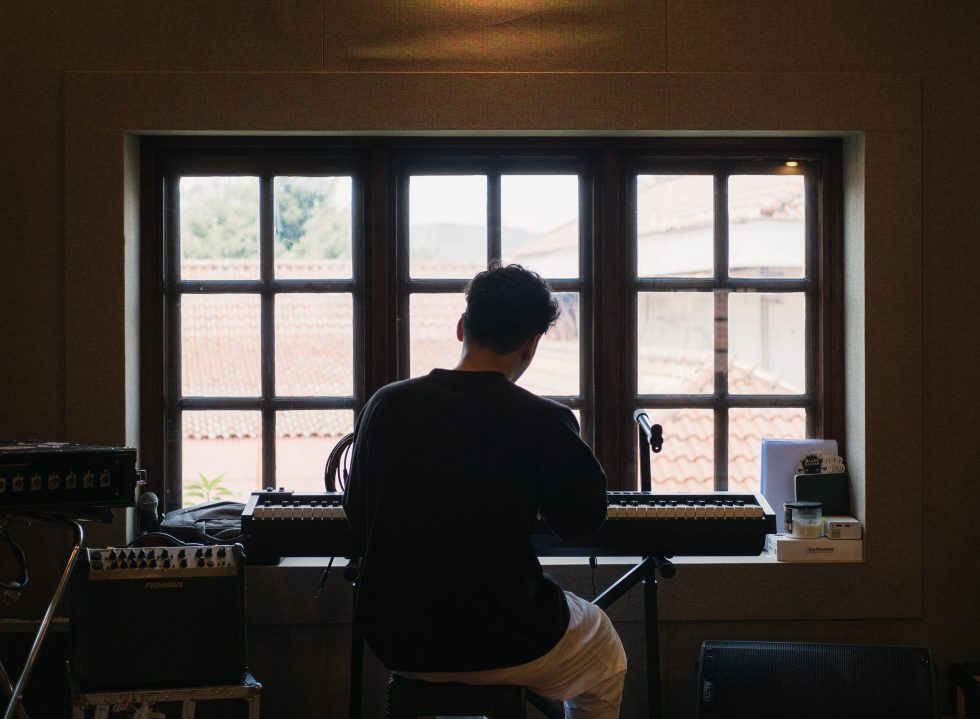 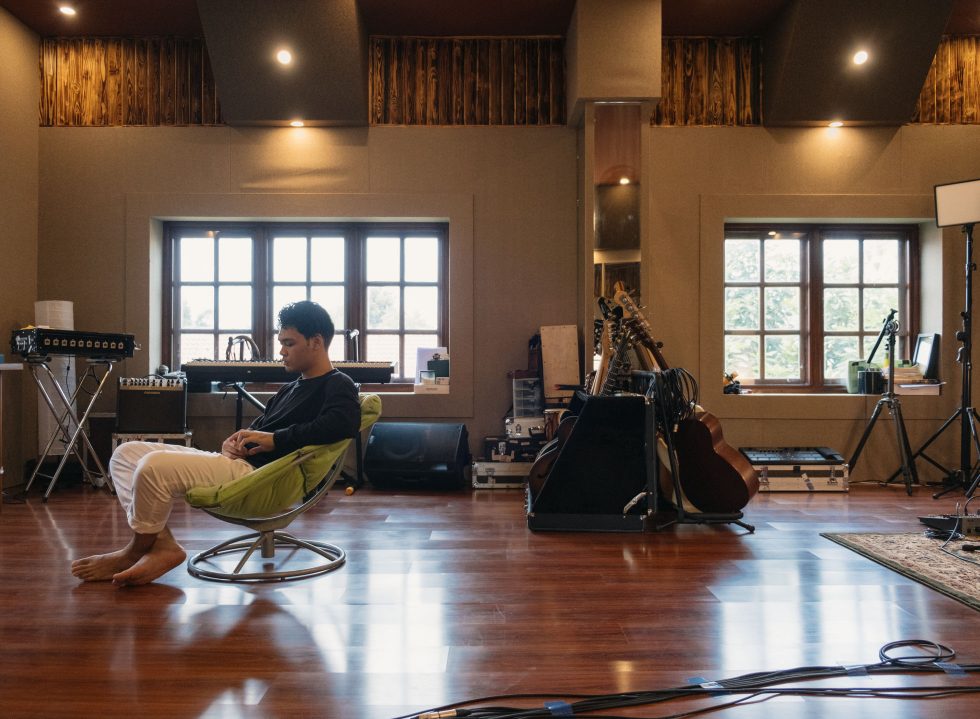 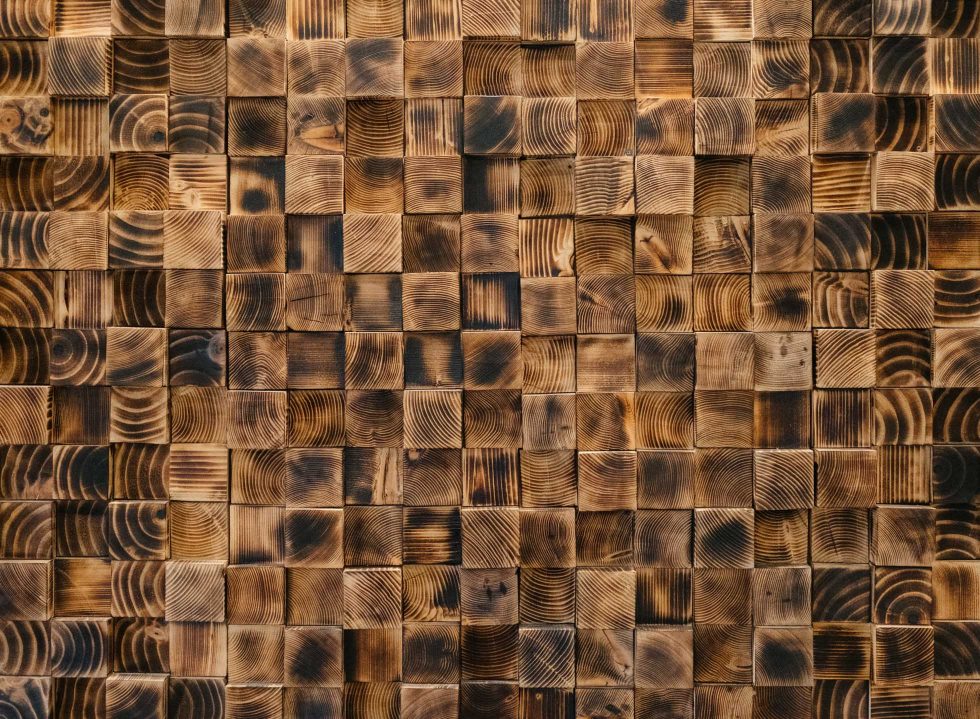 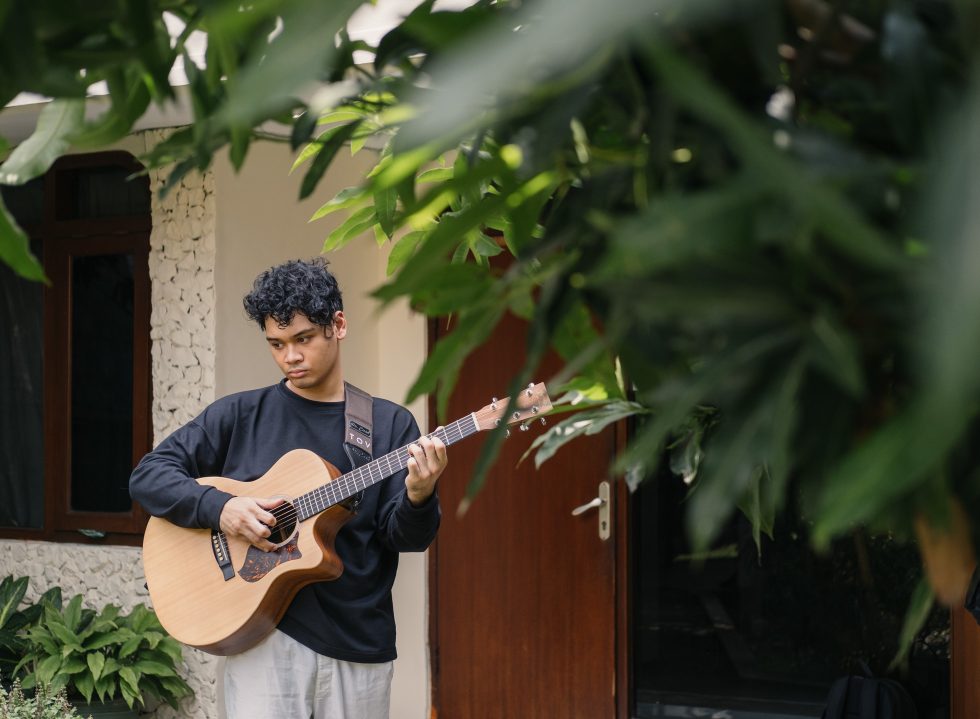 By Hana Oktavia A.
Share
At the dawn of his debut album ‘Amateur’, Mikha Angelo unveils the thrills of becoming a soloist, his memories of music and keeping it authentic in a demand-driven industry.

In a music studio above a book publishing company that doubled as his home, the twenty-three-year-old Mikha Angelo Brahmantyo, casually draped in white trousers and a loose navy sweater, speaks shyly of his approaching showcase for his debut solo album ‘Amateur’, in which he spawned in less than a year. “I would say that ‘Amateur’ is my journey to adulthood since I wrote the songs in times where I questioned a lot of things,”  he shares of his first solo project.

Reserved and friendly, Mikha acknowledges that the start of his solo journey occured at a time where many are forced to halt or restart their pursuits in consequence of the pandemic. “I miss performing,” he whiffs. Since 2013, he and his two brothers, Mada Emmanuelle Brahmantyo (26) and Reuben Nathaniel Brahmantyo (24) have starred in countless stages and television shows as a musical band, The Overtunes, unexpectedly winning themselves multiple awards and having their songs featured as soundtracks for popular Indonesian films. “With them, it didn’t feel like we were in a band. Our achievements are just bonuses.”

Though performing is part of his routine growing up, Mikha remembers in great details his earliest memory of being on stage: at his uncle’s wedding when he was just a fourth-grader. “My mother encouraged me to sing at the wedding. I was so shy and nervous! I even had her beside me while I was on the piano.” One would think that little Mikha had sung a classic wedding hit, but it was the gospel oldie Anggur Baru that became the track of his first-ever solo performance.

Outside of his fulfilling playtime with the guitar and piano, it is also the years of being a church singer that polished his soothing and melodious voice. Before he covered numerous pop and acoustic songs by the likes of John Mayer and Bee Gees, one could easily spot his tall figure within the formation of his choir group along his cousins. “Singing at church and jamming to radio songs in the car with Mada and Reuben was a memorable musical journey during elementary school.”

As of today, his first solo release, ‘Shot’, has mounted to 1.2 million listeners on Spotify and 174.000 viewers on Youtube. The song, charmed with the piano as its backbone, was released earlier this year and written last December when “I had my first relationship,” he confesses. After seven years of pursuing a musical career with his brothers, crafting his first song came off as “exciting and greatly challenging” that following the track’s release, the youngest of The Overtunes doubted if many would resonate with his debut single. “But the songwriting process was smooth, and by the time I wrote the lyrics, I already knew what it was going to be like. I believe that every word and feeling comes with its own musical note.”

The song, just like the rest found in his debut album, greets the ears slowly and smoothly; an ode to his musical influences that his father, Lans Brahmantyo, once a photographer, is responsible for. Mikha’s eyes light up every time he travels back to his early memories of music, a mutual enjoyment and a form of expression his family appreciates dearly. “I remember my father gathering us in his room so we can listen to music together through his iPod; our heavy rotation was Michael Bublé, Jamie Cullum and RAN. He would play them over and over again.”

Now, his father owns an independent book publishing company, a testament to how art runs deeply among the Brahmantyos. “My father would say, ‘I should’ve never quitted that piano lesson!’” he laughs. “With his appreciation for art, he taught us how to value artists and their works, that’s why it’s so hard for us to see music as something trivial,” he adds.

Upon graduating from middle school, Mikha pursued a study in music, an opportunity he perceives as a huge privilege. “I’m beyond lucky to have really supportive parents, they didn’t think twice to allow me to pursue an education in music.” Little did he know, his decision to pursue music education turned out to be the onset of his career. In his first year, the school held an audition for the national TV singing competition, X-Factor, that soon gave rise to his name. The casting was held just a couple days after his birthday, swaying him to think that “it was meant to be”. Dazed and confused, Mikha went with his mother’s earthy wisdom: “There’s no harm in trying.”

The luck resulted in a callback, and soon enough, he found himself being the youngest participant in the show’s first-ever season in 2012 on national television. “I was so anxious. I didn’t want to be on TV,” he recalls. “Why?” I ask laughing, it was easy to imagine the jitters seeing how shy he is. “Besides the publicity, TV contests will stick to your image for a really long time. Even the family would be dubbed and labelled with the show as their last name.” But the cold feet and stage fright didn’t last long, and soon they turned into meaningful experiences and a newfound appreciation for togetherness.

“There was this fight-or-flight mode on the first day of our quarantine training. [The contestants] were supposed to leave for the hotel, but I decided to back out from the competition. It got messy and I received endless phone calls from the production team and people on behalf of the television. We all ended up leaving really late at night, and I remember everybody giving me the silent treatment for a day,” he pauses. “Maybe they had mistaken my panic as arrogance.”

Though Mikha didn’t make it to the finals, he became the first and youngest candidate to sign a contract with Sony Music Indonesia, together with his brothers. Since then, the ride went by fast, and the experiences from partaking in the competition became a valuable insight.

Our conversation builds up to how idealism, especially in today’s competitive music scene, might come at a cost. “I remember my older friends from the competition warning me, ‘It’s so hard being an idealist, Mik, you might end up just singing in a café just like me.’ I soon acknowledged how difficult it was, but I didn’t fully agree with their opinion. It’s not impossible to be an idealist and still thrive.”

To Mikha, being an idealist means keeping your work authentic. The more vulnerable, the better. And with the success following the release of ‘Amateur’, Mikha is proving that staying true to himself in his works serves him very well. “For now, I think the challenge is to overcome my fears that my works don’t meet people’s demands and expectations.”

It’s a whole new journey for the young and emerging Mikha Angelo, and placing himself back to being an amateur is seemingly the best way to re-learn for him: “I’m on my own now. If there’s a difficult task I am not yet accustomed to, it is my duty to learn it.”

After an hour of exchanging conversation on his new solo pursuit, he stands up to reach his lovers: first his piano, and then his guitar. “During quarantine, I tried painting for a change. But I didn’t have what it takes!” he chuckles. “Music has always been my only method of expression.”