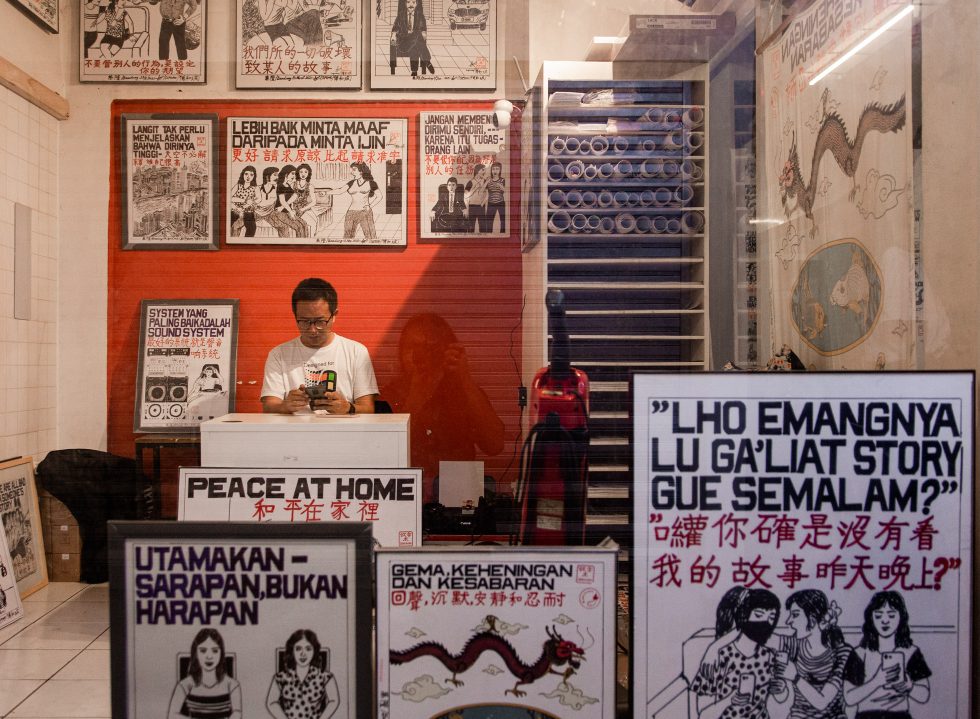 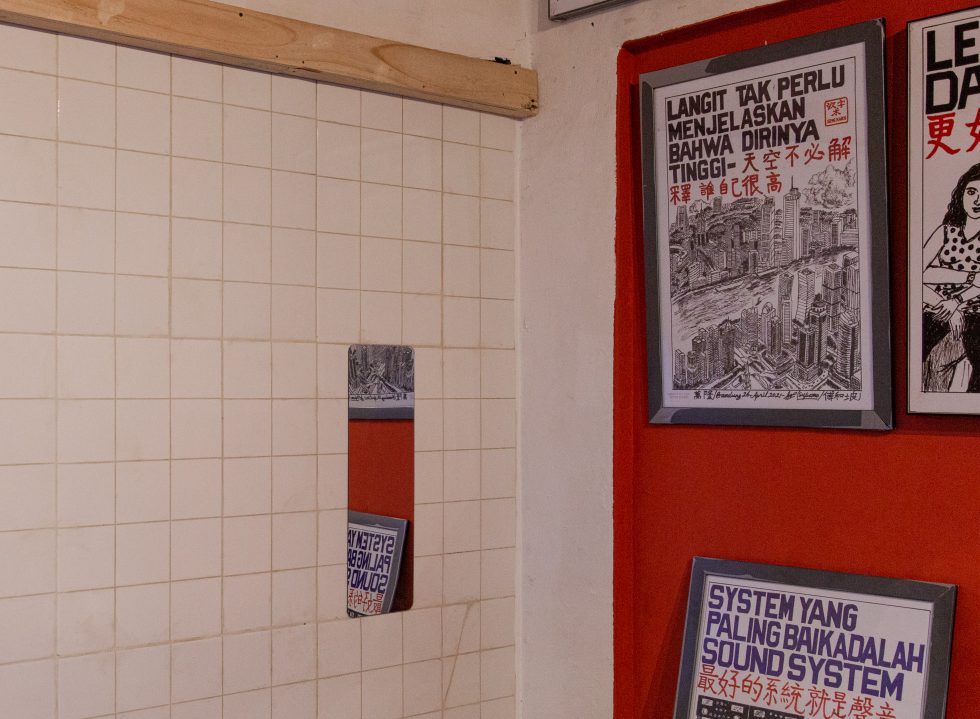 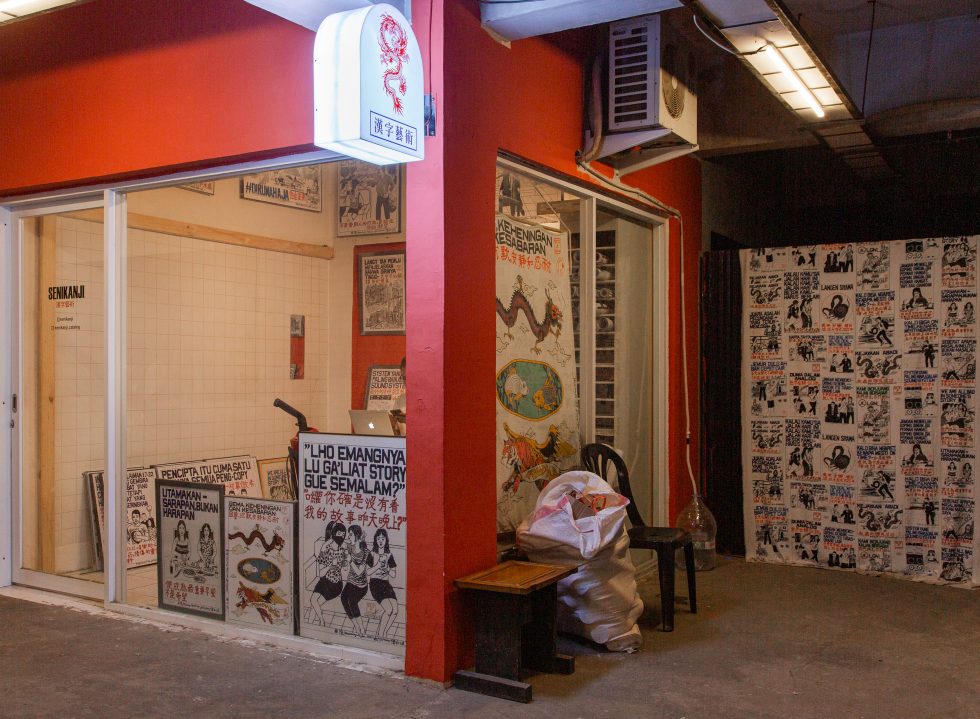 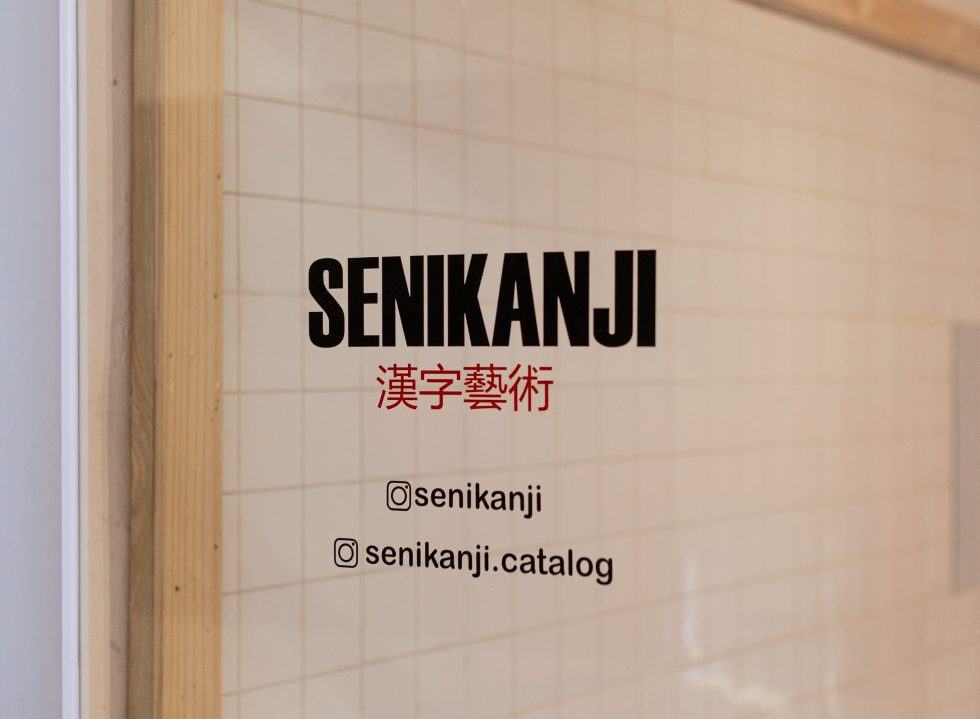 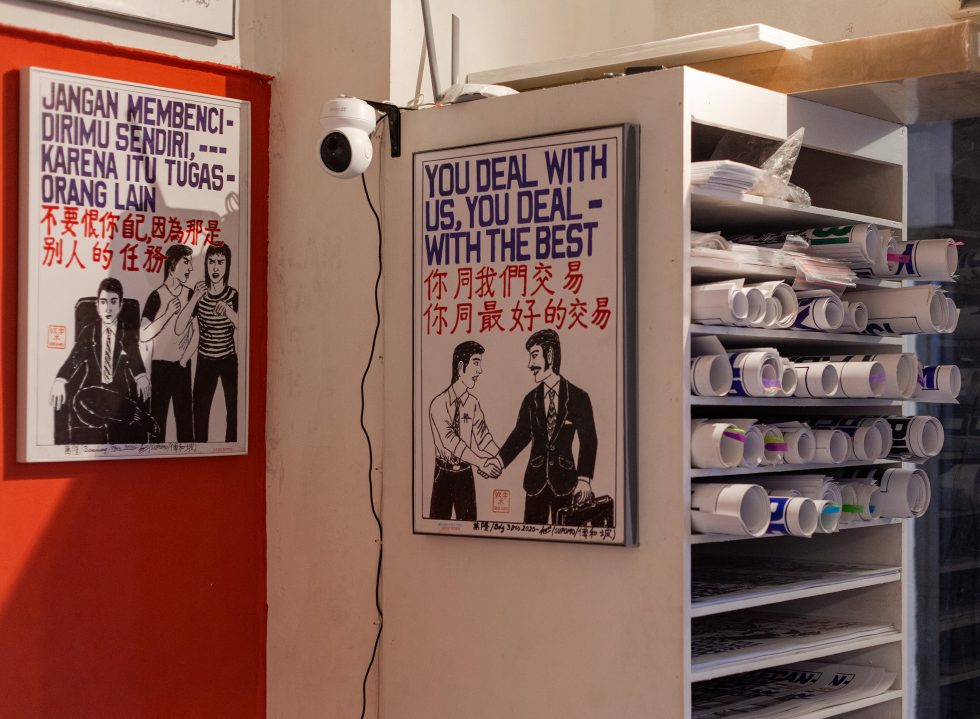 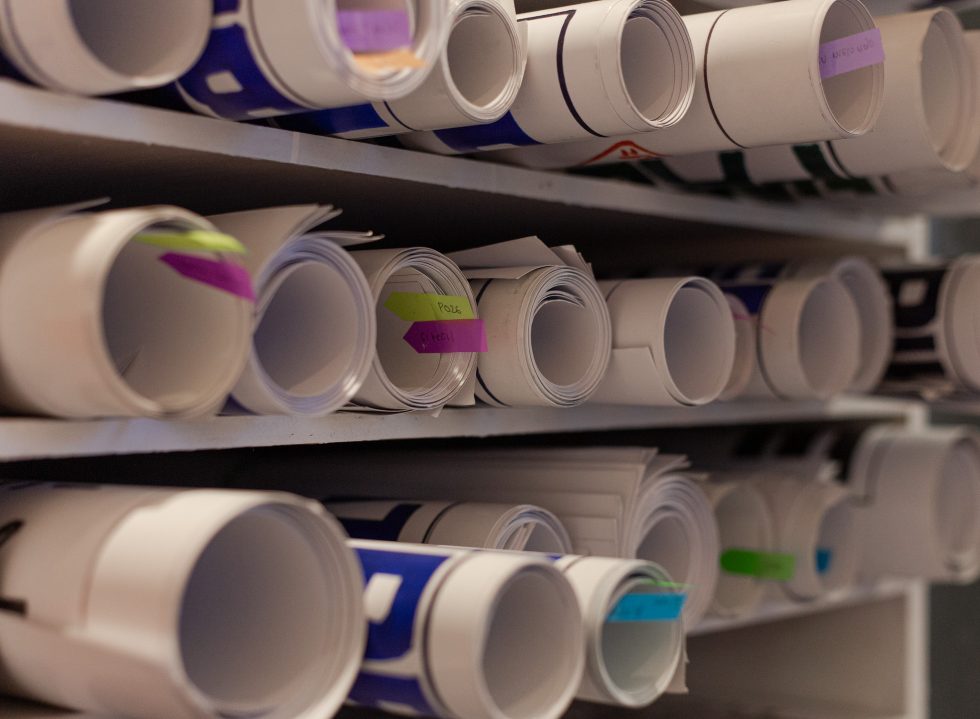 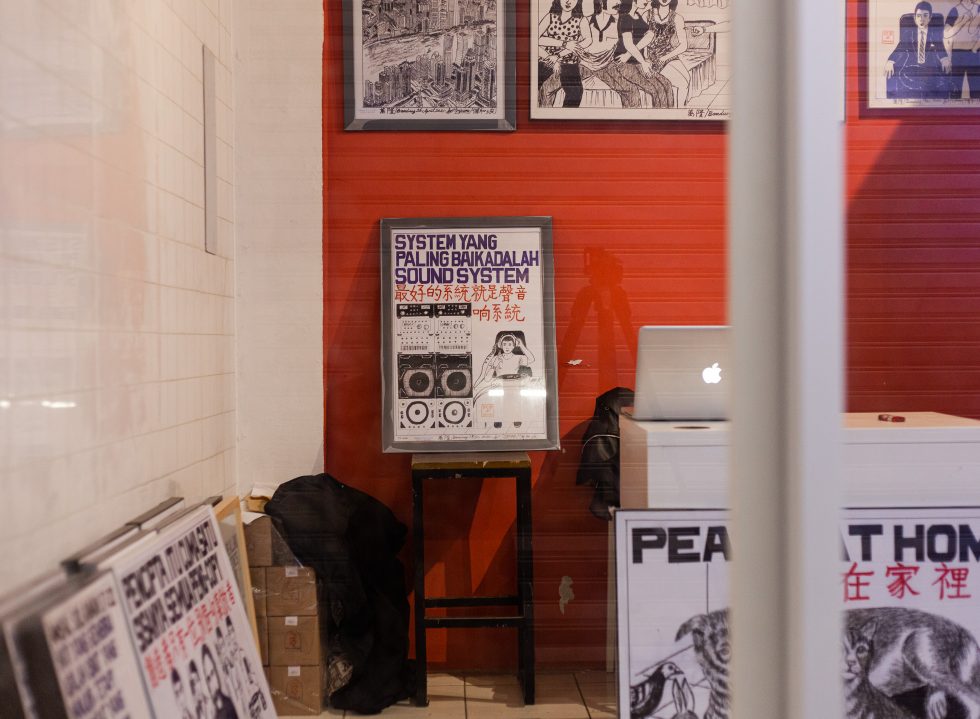 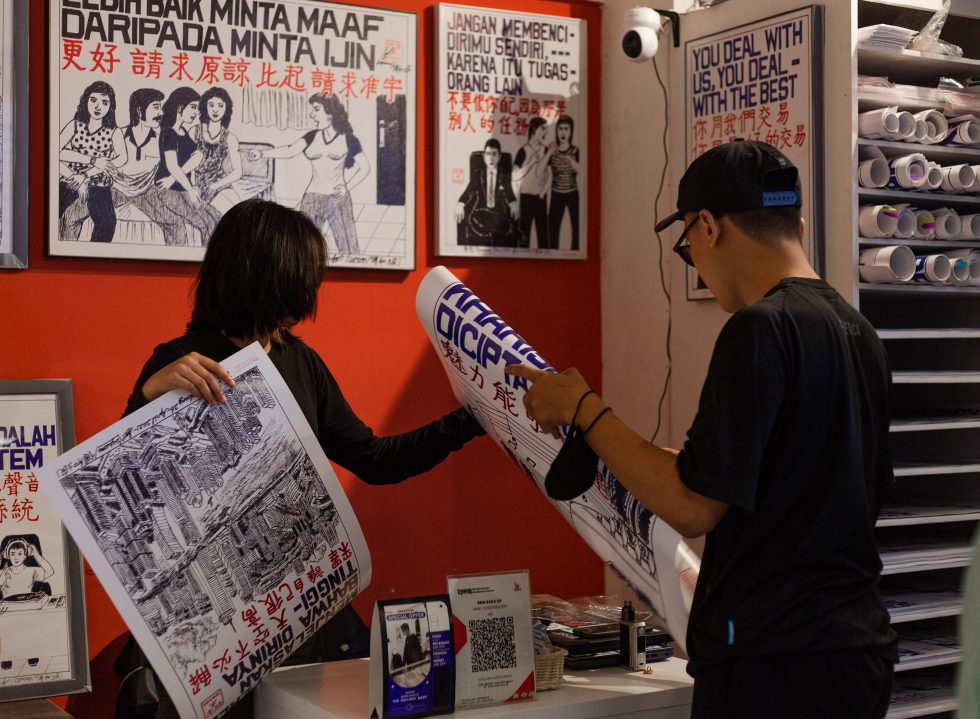 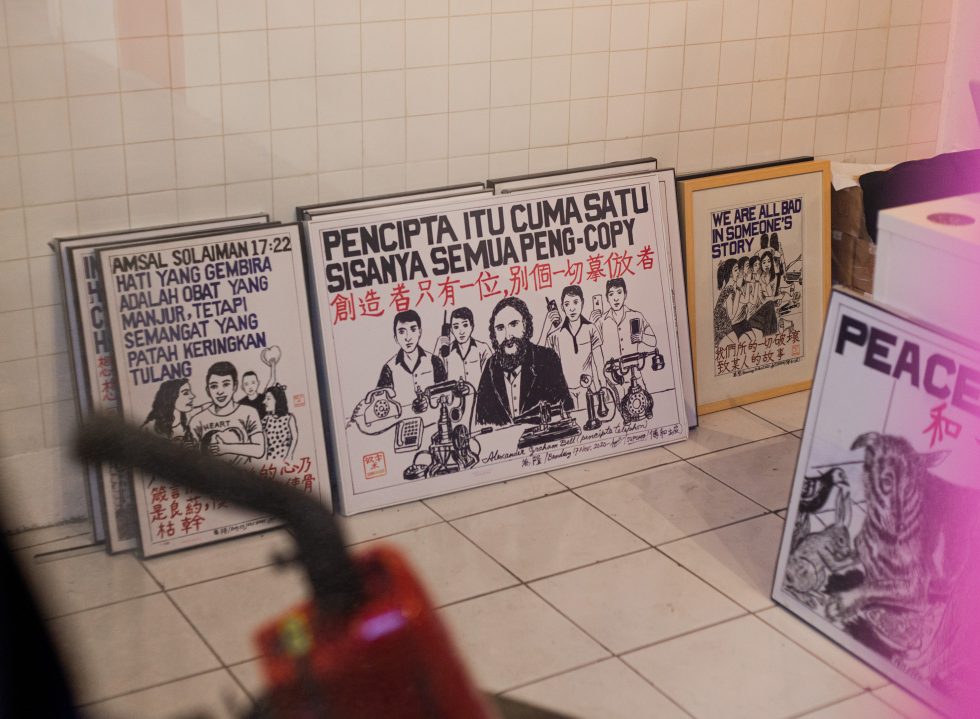 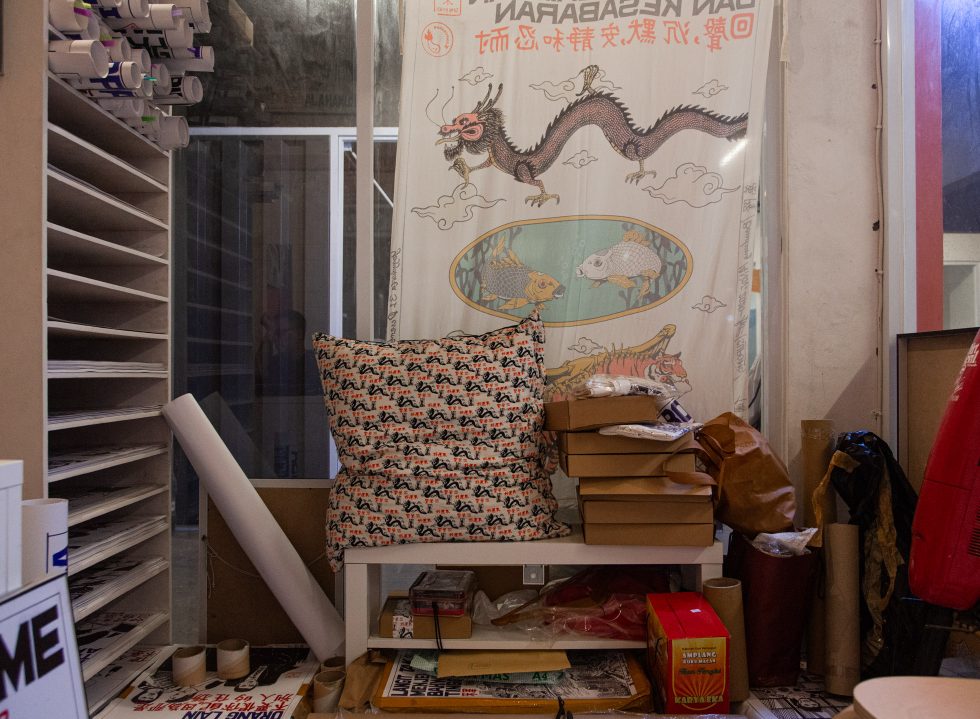 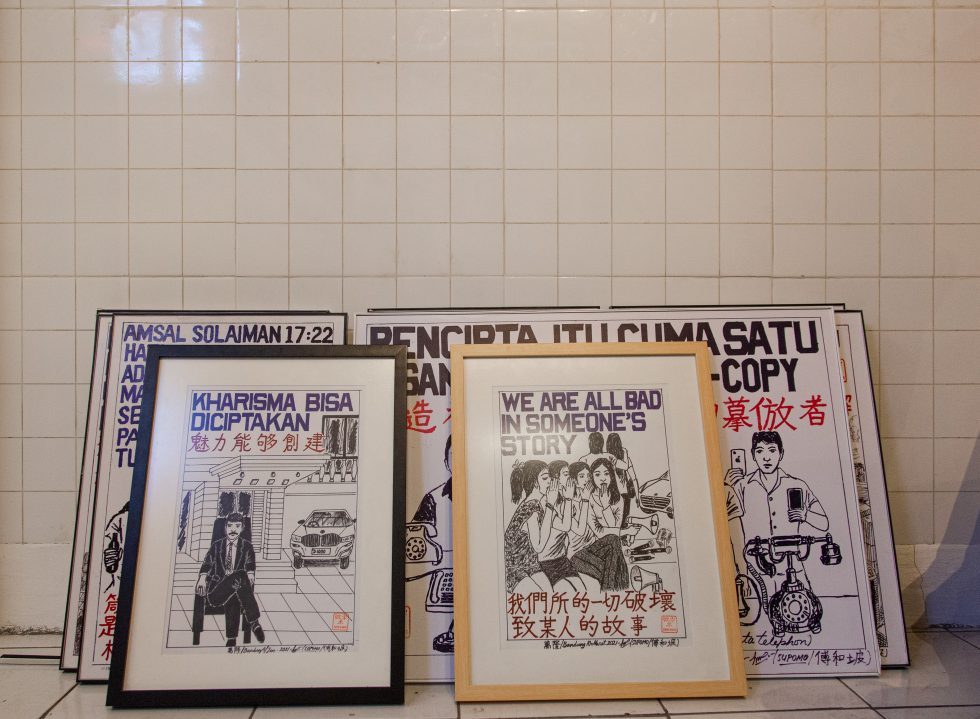 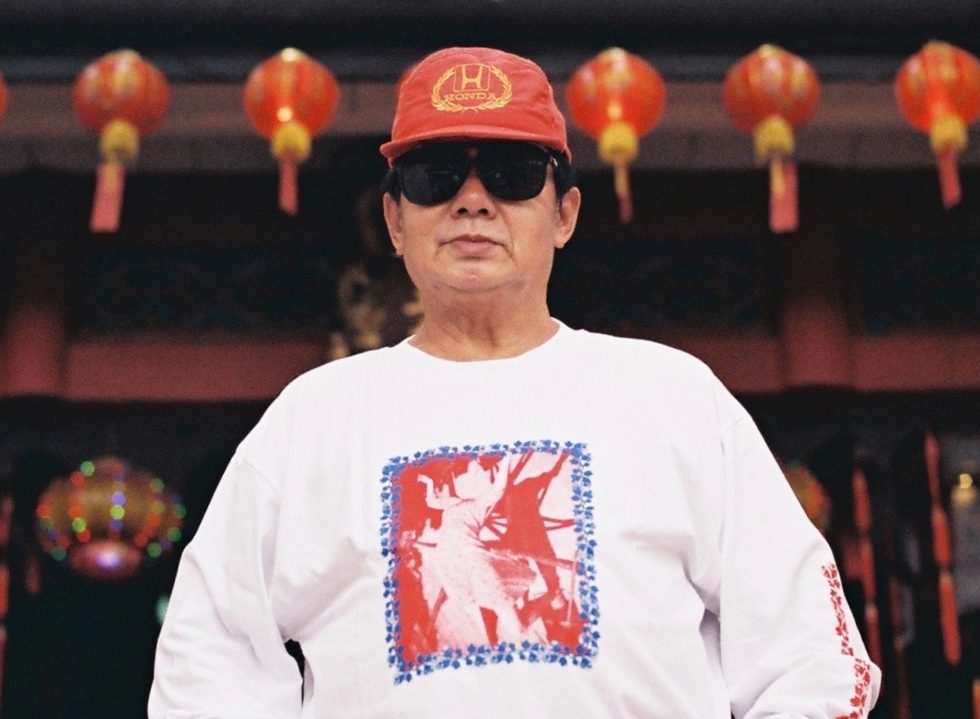 Seni Kanji: The Legacy Lives On

by Hilda Nathalia Raina
Share
Behind the humour-infused satirical quotes and cartoonish figures of Bandung-based studio Seni Kanji, the late 66-year-old illustrator Paulus Supomo carved out a legacy that continues to live on.

An A2 white paper, felt tip markers, and a child-size fold-up table. That’s all Pak Paulus Supomo (Fu He Po), the man behind the old-school illustrations of Seni Kanji, needed to tackle a print from start to finish. Long before the Bandung-based studio’s inception in 2018, sketching sessions was a discipline he’d pencilled into his undeviating daily routine: days are spent toiled away in a textile factory, while evenings are reserved for playful drawing.

“My father had always loved drawing, but he never believed he was good at it. For him, it was just a hobby, nothing more. Most of his life he spent as a factory worker, and when I was young, he would always hound me not to turn out like him. He was convinced that he failed in life, and this robbed him of his confidence, up until the very end,” revealed his son, Yulius Iskandar.

Reserved by nature, his son described him as “painfully shy” and “unable to hold a conversation for more than 5 minutes”—drawing was his mode of expression. And yet, when it came to learning, he refused to let his temperament or age restrict him. At 64, he felt compelled to learn Mandarin, committing to a five-month course and continuing his practice daily through books, even going as far as scouting for Chinese-speaking tourists to exercise conversational skills—no small feat for the established introvert.

“There is distinct freedom that radiates through his drawings.”  – Ican Harem

Coincidentally, this birthed the trademark style of Seni Kanji: cartoonish figures drawn in rough brush strokes, thick lines outlined puns and quotes in kanji (Mandarin characters) and their Bahasa counterparts in blocks of red, blue, and black, reminiscent of a vintage Chinese calendar.

An unconventional start, Yulius initially set up Seni Kanji, which somewhat launched itself following an unassuming tweet he posted (which detailed his father’s resignation and availability for commission work), to coax his father out of his factory job and carve time for him to do what he loved. Reluctant at first, it took incessant persuading and an almost-forced resignation for Pak Supomo to cave in.

Cleverly framing everyday struggles in a candid manner, his artwork is characterised by marker stencils and strokes against plain white backgrounds. On top of the page, quotes and hand-lettered kanji are at once witty, relatable and tinged with easy humour. Lighthearted advice like ‘Don’t complain that your coffee is cold, it was once hot but you ignored it’ and ‘Don’t hate yourself, others will do it for you’ are accompanied by figurines acting out these different narratives.

His freestyle drawing was what drew Ican Harem, one-half of musical group Gabber Modus Operandi to reach out for a collaboration. “There is distinct freedom that radiates through his drawings. He embraced his heritage of Chinese descent and effectively transferred that [identity] into something so simple, yet relatable,” the artist stated.

After all, who would’ve pieced together a 60-something-year-old illustrator with the likes of Gabber Modus Operandi or the distinguished musician Iwan Fals? But despite the stream of commissions and collaborations with musicians and fashion labels, Pak Supomo never truly saw himself as an artist or an illustrator.

A friend of Yulius and founder of Grammars Ardo Ardhana remarked that “At first, Pak Supomo was extremely shy. It took a while for us to convince him that people do appreciate and want to see his work, he was very doubtful of that. The exhibition was a success though, many people came and bought prints.”

“I am glad that he was able to spend his last few years working on something he truly loved, and I hope to continue his legacy through his prints.” – Yulius Iskandar

It was during this period that Bergas Haryadita, co-founder of Zodiac acquired an original print for himself, which paints in bold lettering: ‘The best system is sound system’, framed and displayed in his house. Bergas shared that he “appreciated the raw drawing techniques and tools that Pak Supomo utilises—the DIY nature of it feels like we’ve been given a glimpse inside his sketchbook. His prints are catchy, relatable, and don’t take themselves too seriously.”

Perhaps it’s for this same reason that so many are drawn to his work. If you look closely at some prints, white-out was applied to correct mistakes, only to be drawn on top of it. The at-times inaccurate grammar and layered brushstrokes add to the ‘as it is’ feel of his prints and feel indicative of the attitude he applied to his work—that nothing he does is in conformity to anyone else.

Since Pak Supomo’s passing in July 2021, many have been left wondering what’s next for Seni Kanji. As it turns out, they’re not slowing down anytime soon. Upcoming exhibitions and collaborations are in the bag and inquiries on original prints have flooded in, while a number of unpublished prints by Pak Supomo are awaiting release.

At the end of it all, Pak Supomo’s illustrations are shaped into more than words and characters on paper. Seni Kanji provided a mediating occasion for the father-and-son to communicate and collaborate. “We exchanged very few words before we started Seni Kanji. In a way, this helped our relationship—I am glad that he was able to spend his last few years working on something he truly loved, and I hope to continue his legacy through his prints,” Yulius shared with a soft smile. 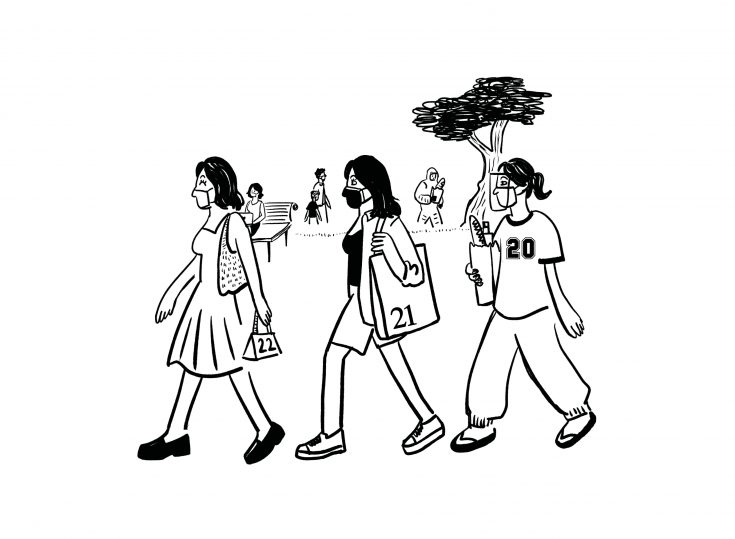