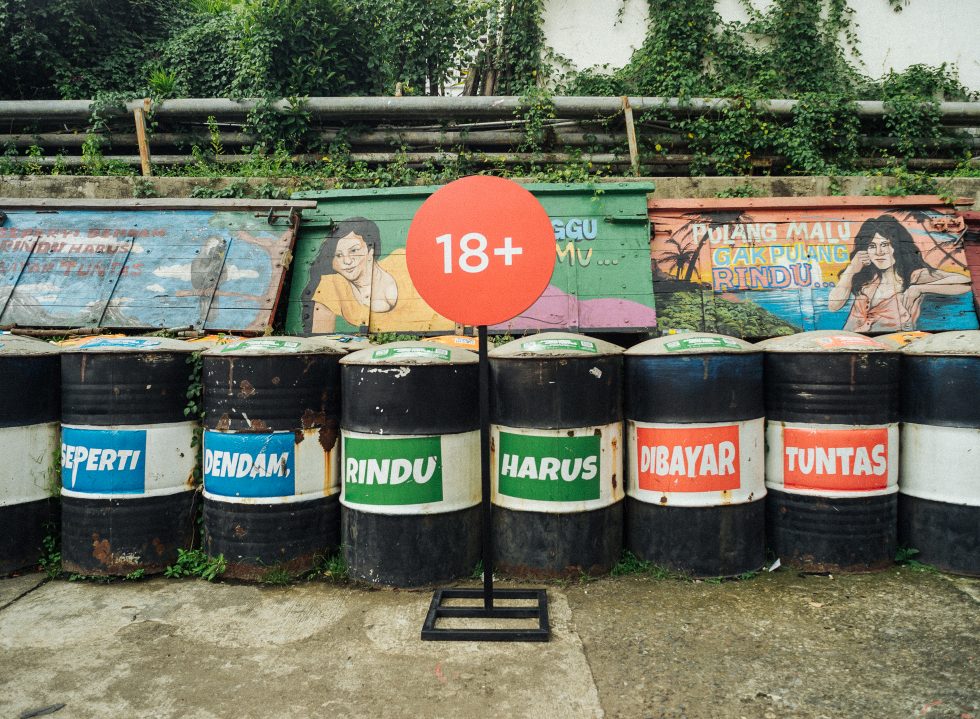 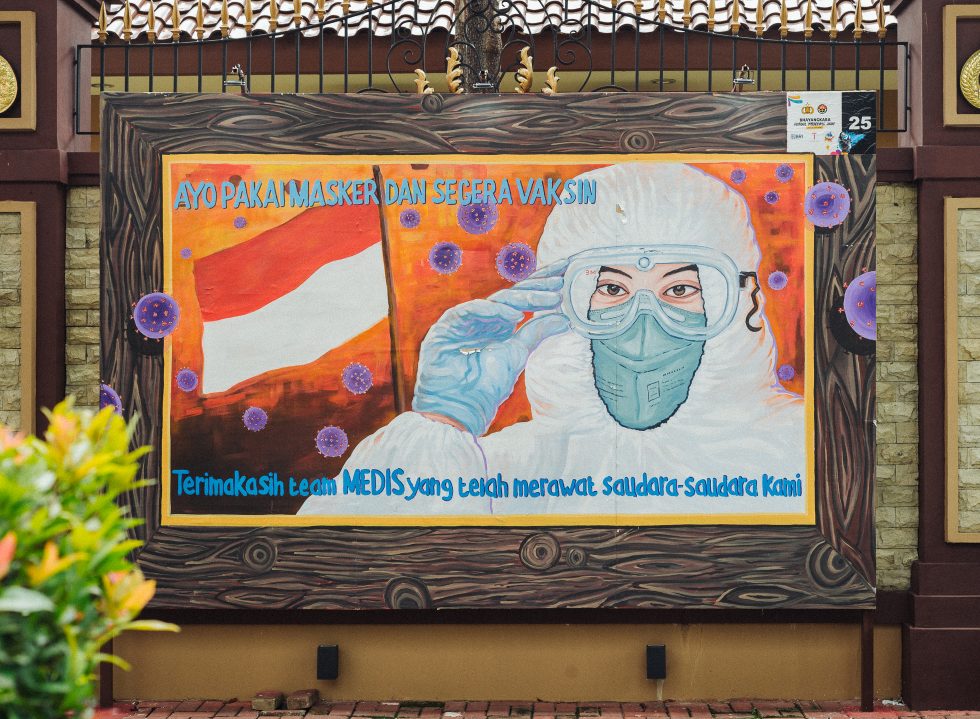 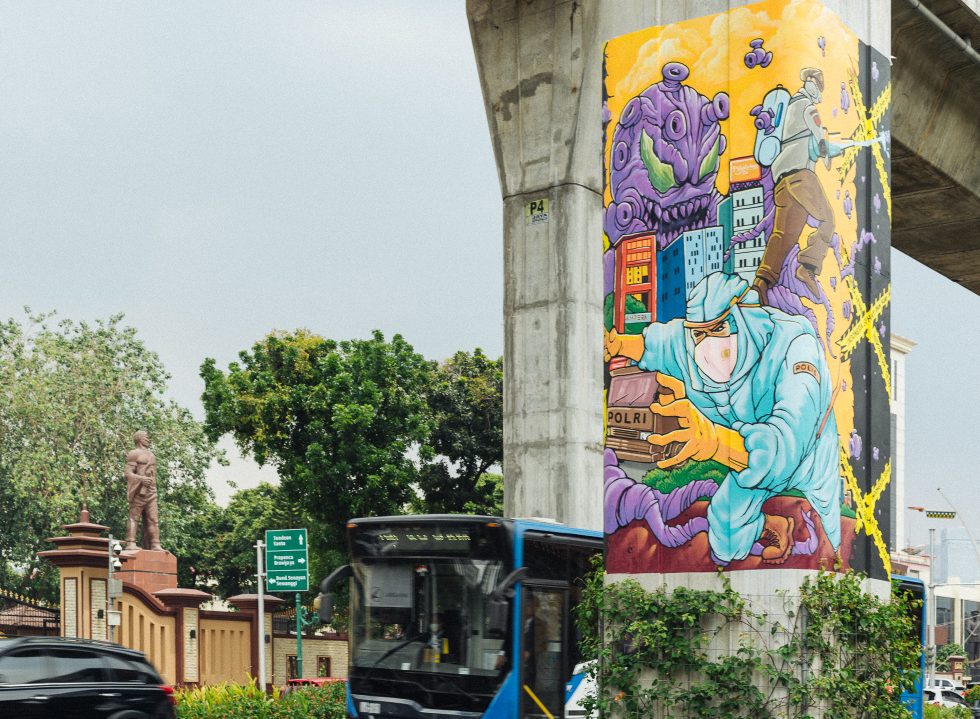 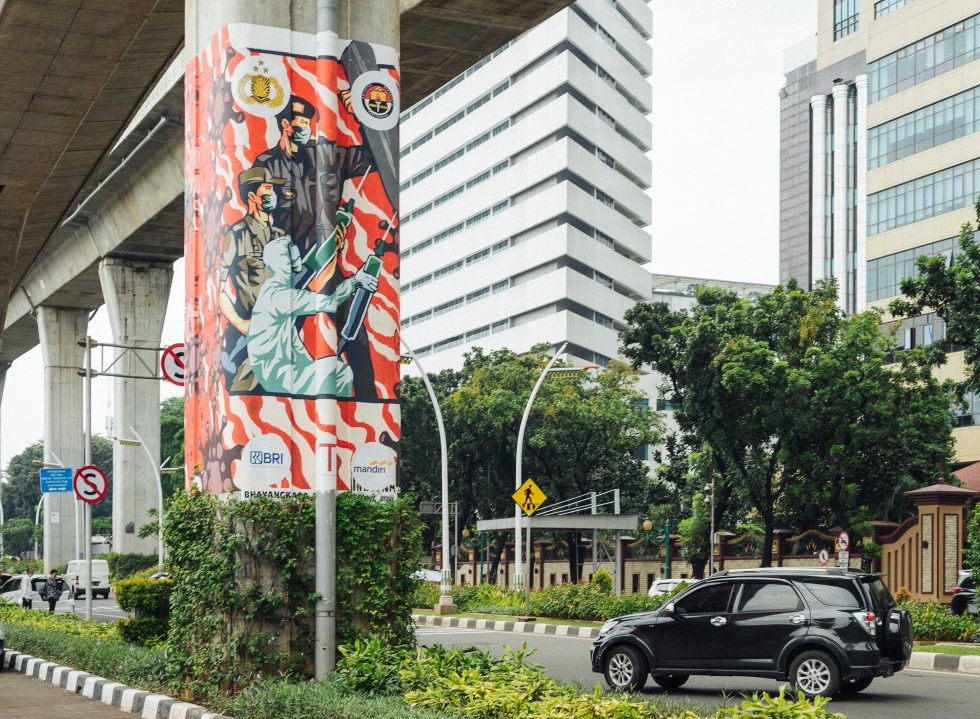 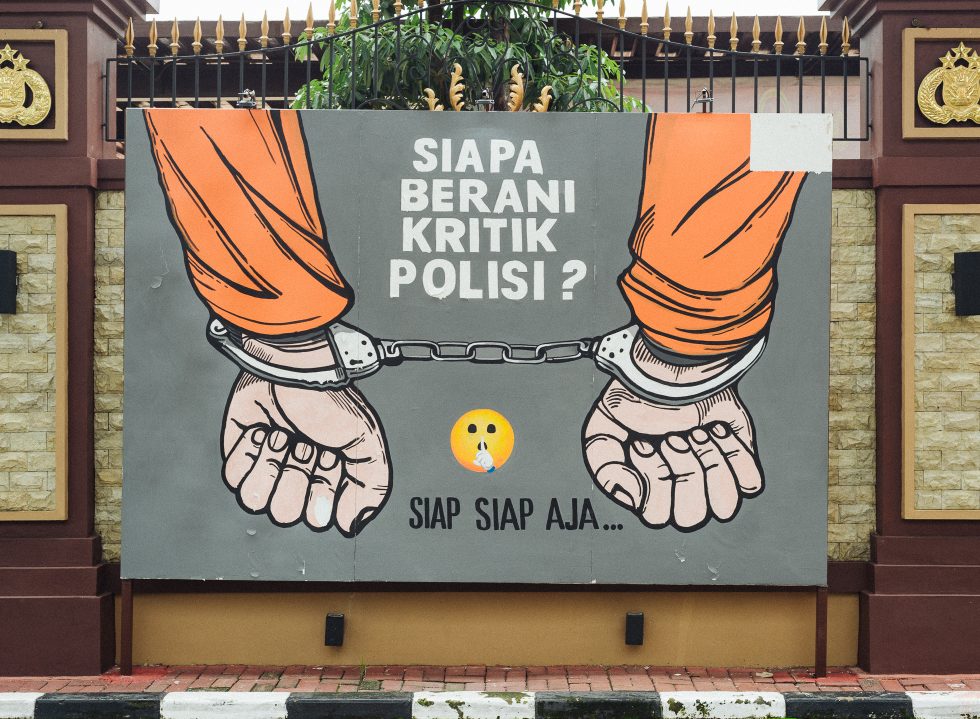 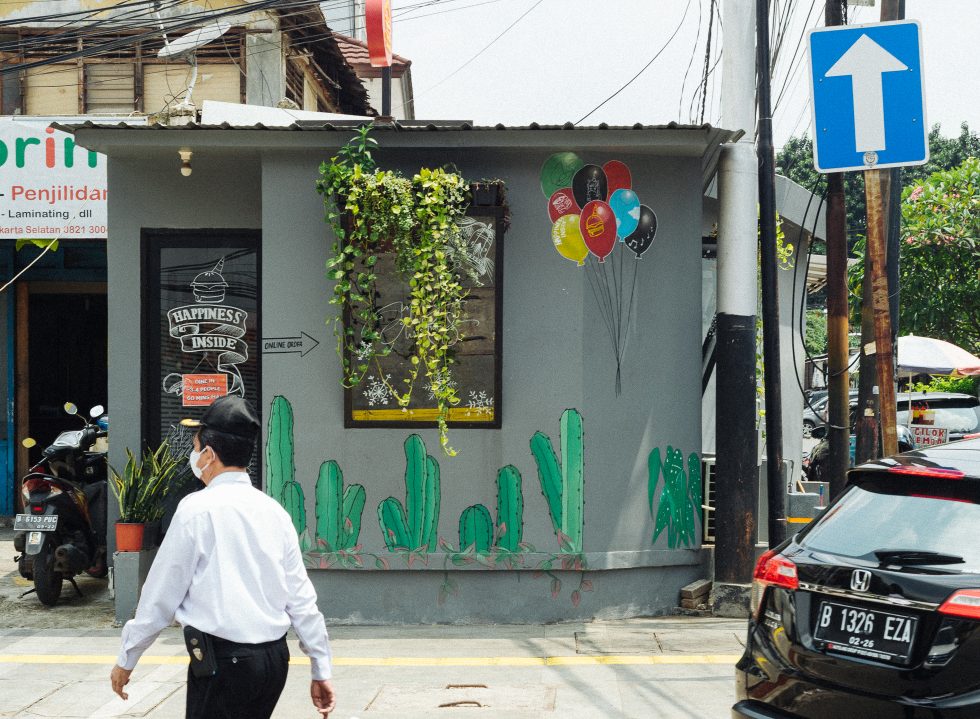 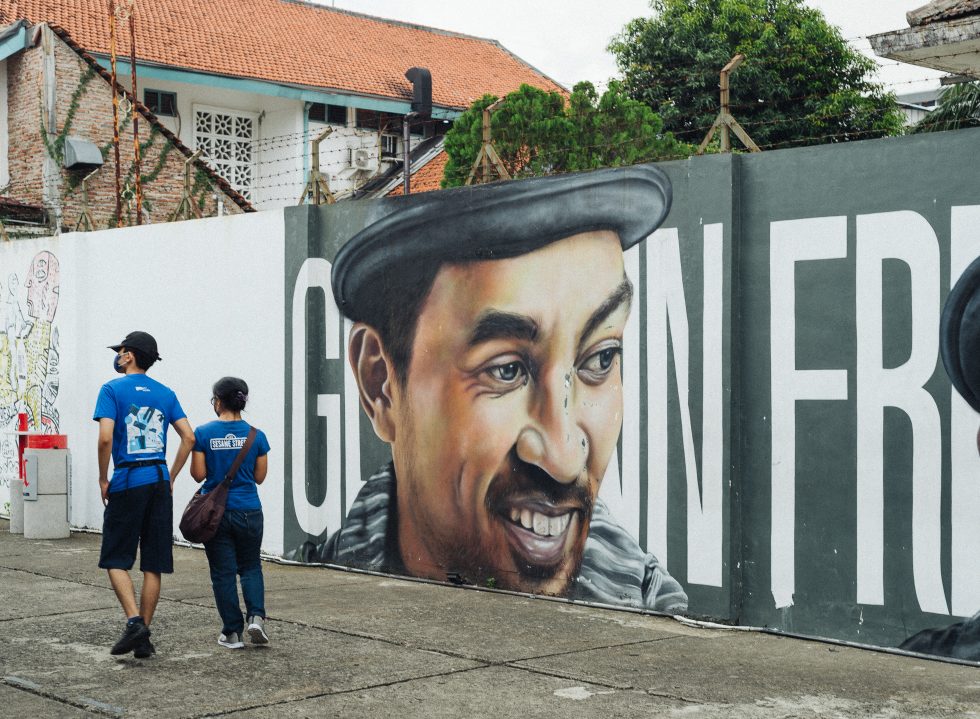 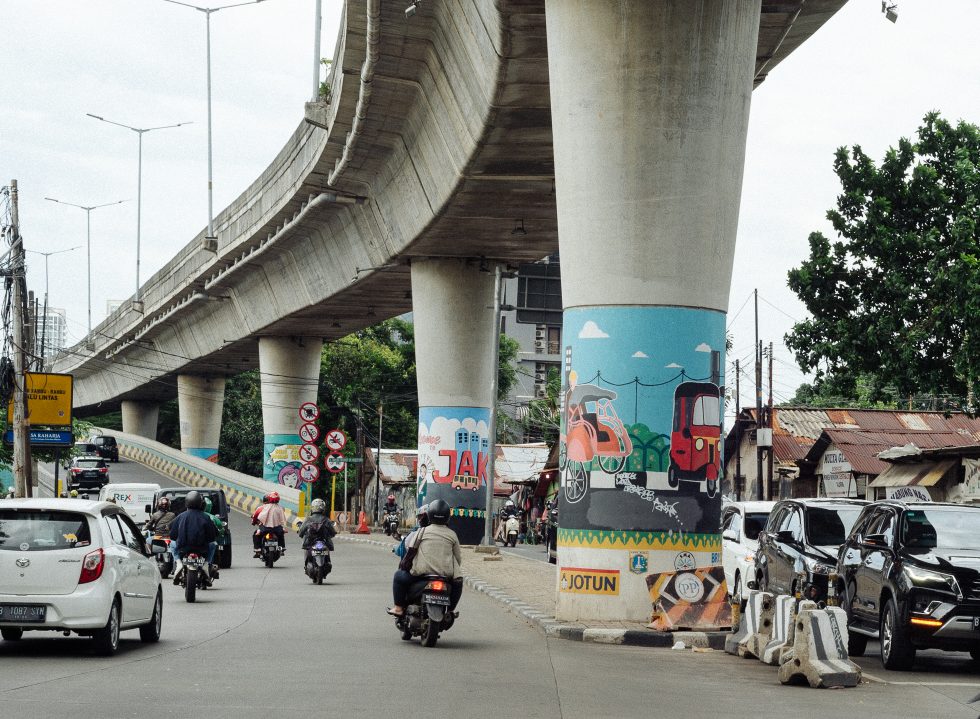 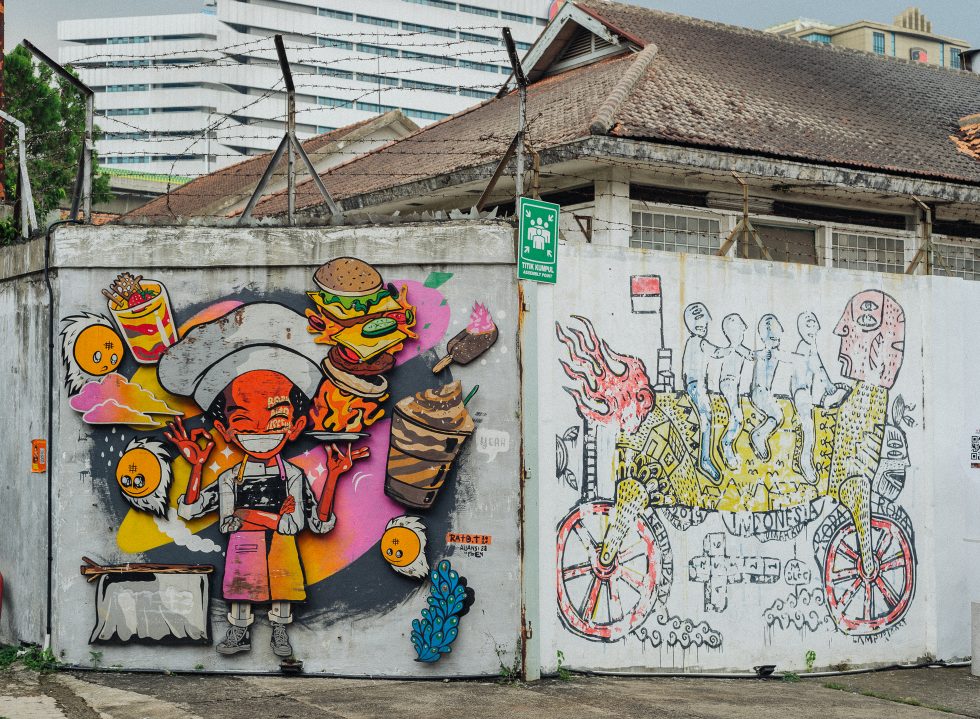 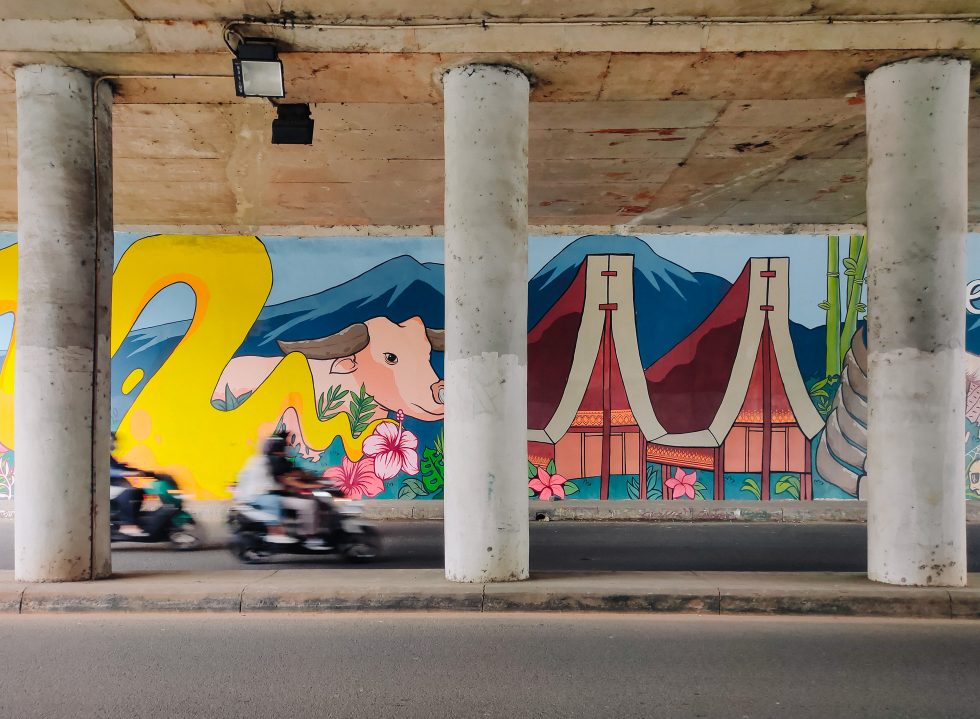 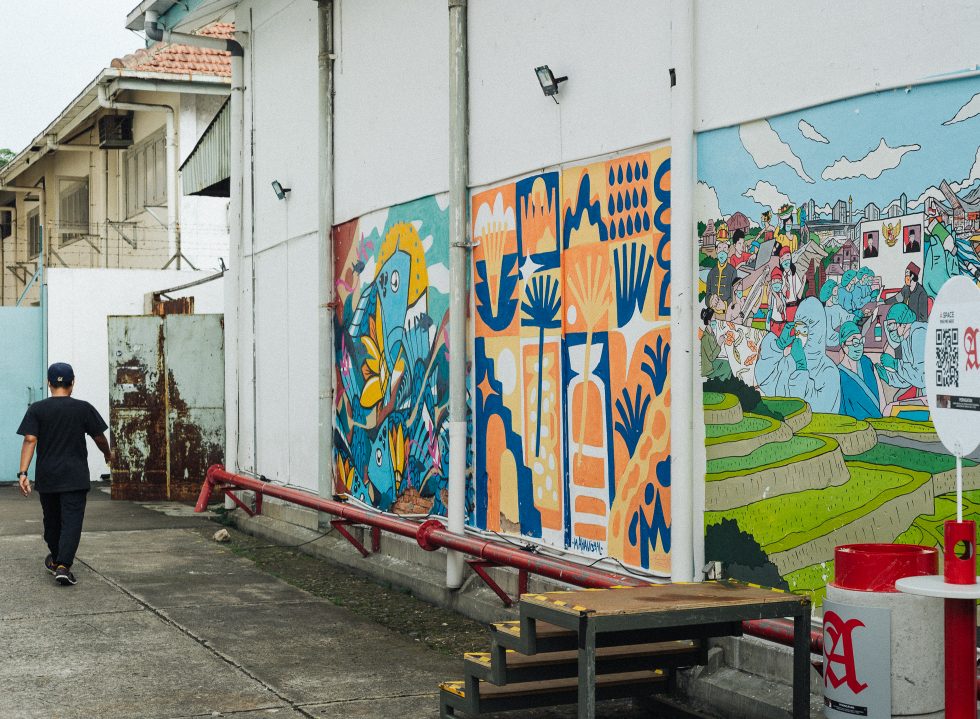 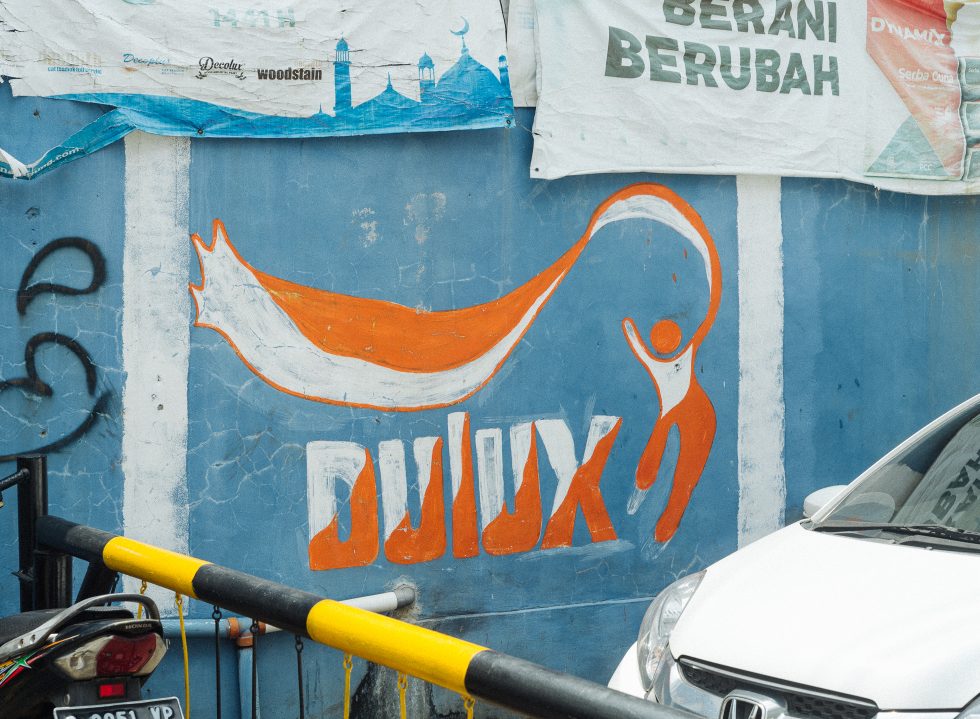 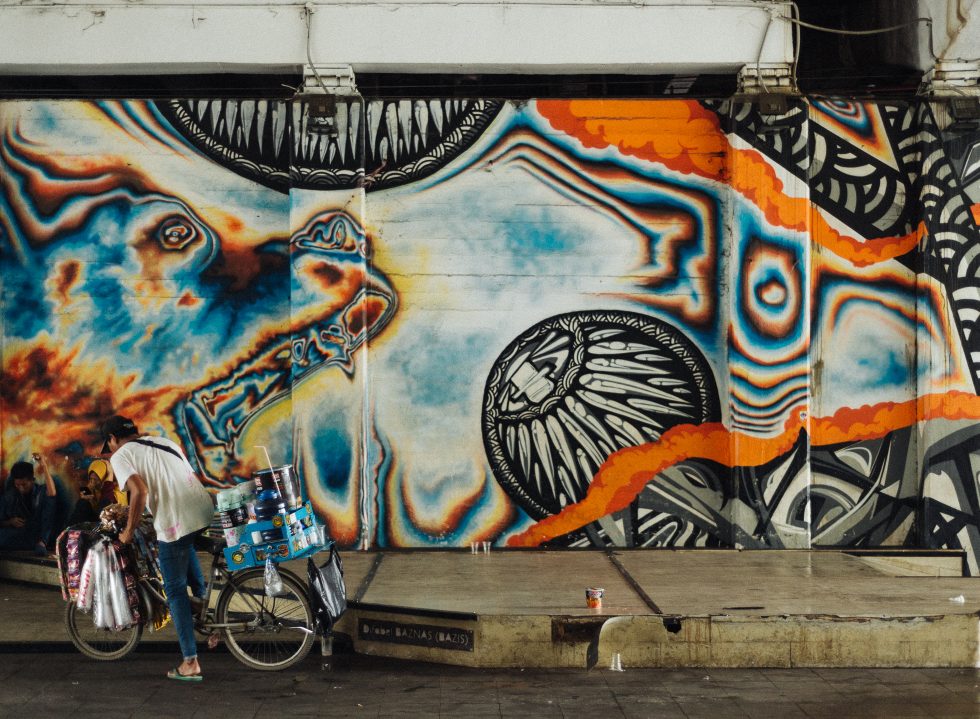 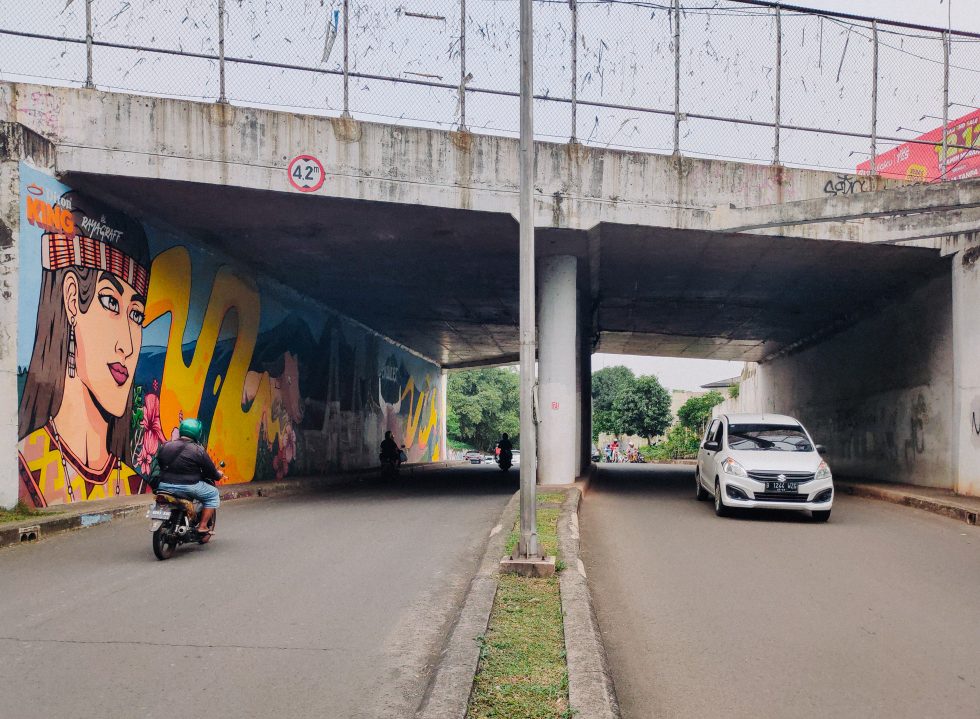 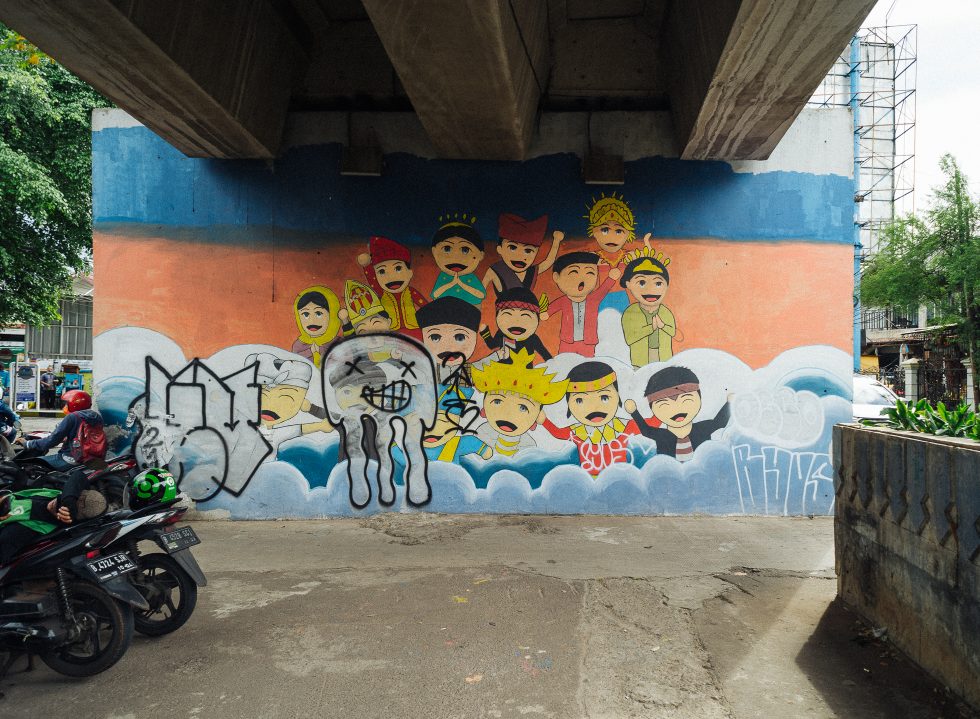 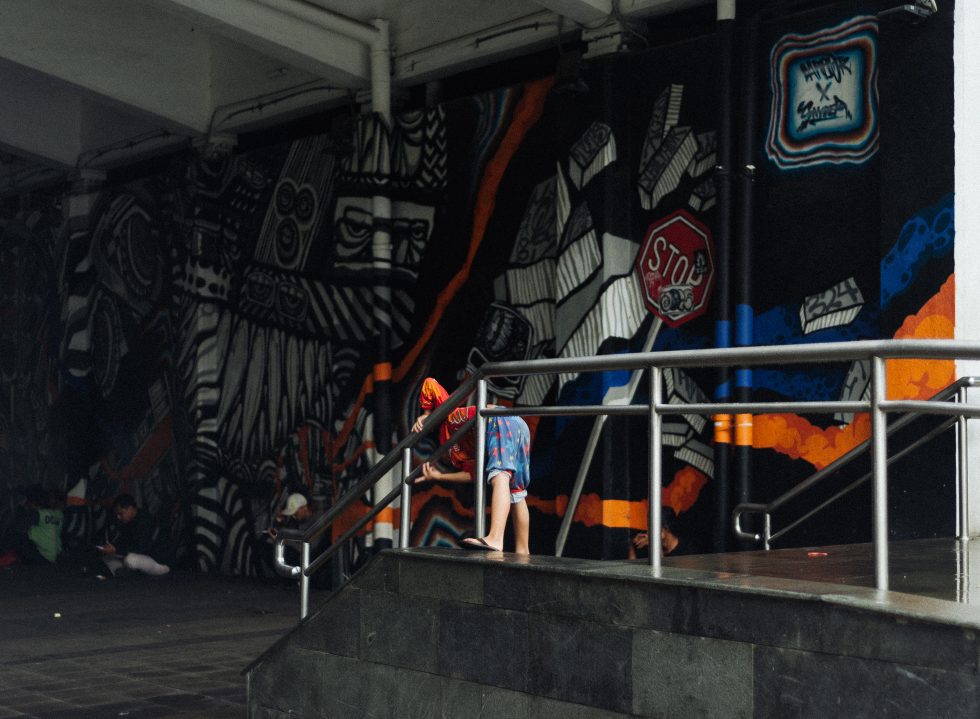 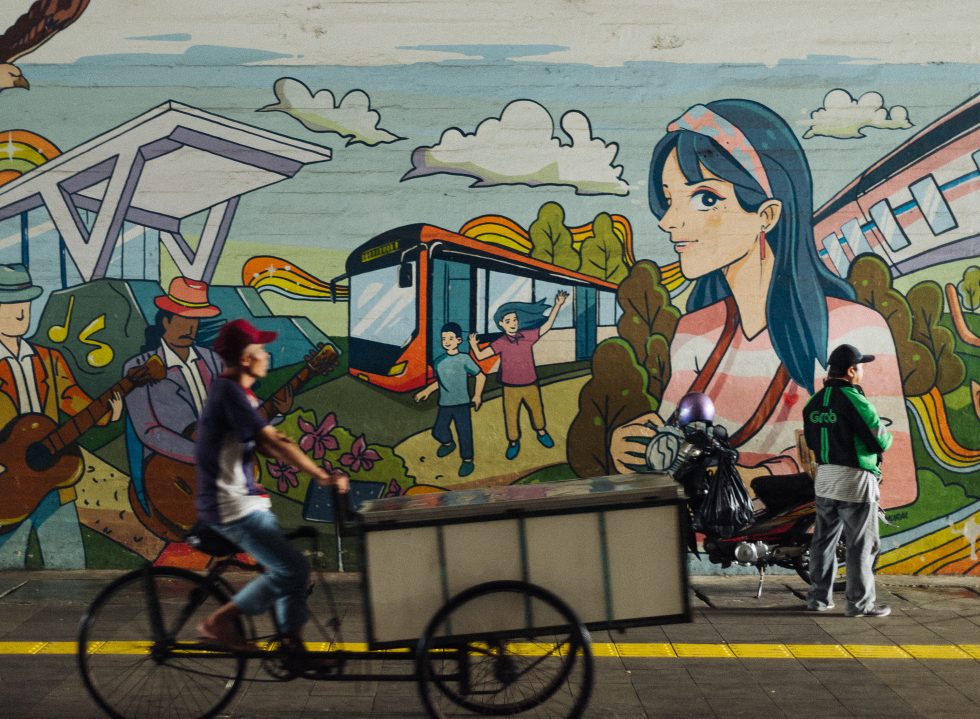 by Cindy Julia Tobing
Share
Dotted across public spaces, this photo essay documents street murals that unveil the creative force and stories of Jakarta’s inhabitants, as they hold a unique role in creating a sense of place and echoing a collective reality that shapes the city’s identity.

Street art has always occupied an interesting space in the urban landscape. It can be forms of creative expression one time, vandalism at another; a city’s cultural markers on one spectrum and visual pollution on the other end. Yet, it is within these nuances that street art, such as murals, continue to tag its identity on public spaces and neighbourhoods, peeling another layer of a city’s character and stories of the people who live in it.

At the car and motorbike-free zone Kendal Tunnel in Central Jakarta resides a 120-square-metre spray-painted mural made by Indonesian artist Darbotz and German artist Synder. Commissioned to commemorate 25 years of friendship between sister cities Jakarta and Berlin, visuals of a tiger, drawn in Snyder’s psychedelic shapes, and Darbotz’s signature squid character in bold black and white lines, fuse in strange harmony.

Adding a splash of vividness to the area, those walking by, from passersby that just got off from the nearby Dukuh Atas MRT station to drink vendors taking a rest with their pushcarts, get to access one-of-a-kind artwork intended to be experienced in public spaces. On the other side of the wall lies another commissioned mural that is more straightforward in depiction, painting Jakarta’s familiar faces such as the city’s infrastructure and lifestyle of its inhabitants.

Head to Jalan Trunojoyo in South Jakarta and one will encounter several murals that confront the pandemic. Adorning the JLNT overpass, street artists depict the virus as the big bad monster, while healthcare workers in protective garb and masks assume the role of the people’s guardians, painted comic-style with a lively chorus of purple, yellow and blue.

In front of the National Police headquarters at Lapangan Bhayangkara, several curated murals carry the theme of criticising the authorities; one expresses sarcasm in how the police handle protestors, fusing both imagery of hands in shackles and a text that translates to “Who dares to criticise the police? Watch out.”

Commissioned murals that have started to dot the city may be a sign towards a future where street art is further embraced to not only embellish public spaces but as a platform to channel the public’s creativity and expression, yet the situation also reveals artworks that meet the opposite fate.

Some street art found within the perimeters of Taman Ismail Marzuki are intentionally painted over, as observed by Manual’s photographer Haryo Bimo when he scoured the city, alluding to authorities deeming the original material as inappropriate for the public to see. Under the Antasari flyover, a colourful mural painting showing the diversity of Indonesia’s ethnicities is defaced with graffiti tags, revealing another reality to street art that is fleeting and vulnerable in nature.

In all its different colours and shapes, styles and themes, murals that scatter across the streets of Jakarta unite on a desire to be seen by people from all walks of life. They can be decorative in purpose or controversial in nature; they can represent public unity, but they can also voice out the bellyaches of the people. Amidst its duality, murals, nevertheless, hold a unique role in asserting a neighbourhood’s sense of place and ultimately the city’s identity, along with the people who shape it.