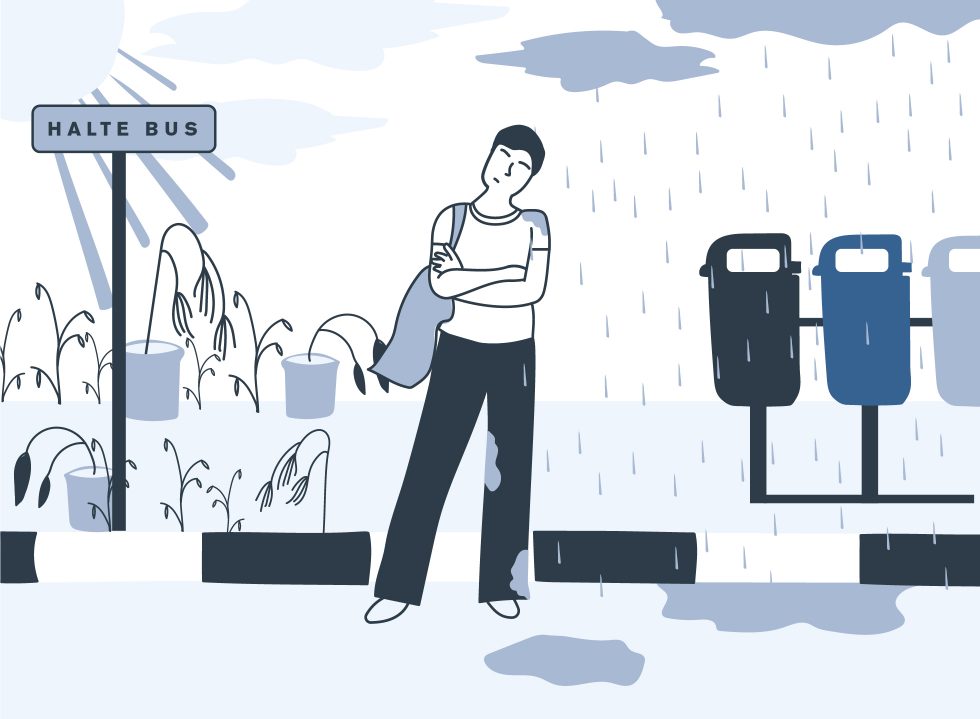 Share
What’s worse than waiting for a bus on a scorching day? While waiting for a bus in the absence of a shelter, editor-in-chief Julius Kensan ponders on inadequate facilities (or lack thereof) in the city’s public transport services.

Sometimes I stay awake at night pondering on one question over and over again ever since living in Jakarta. No, I’m not losing sleep over whether bald people shampoo or soap. Rather, I just can’t fathom why there are so few bus shelters when the government has been encouraging us to take public transportations.

Of course, many factors are contributing to the low usage of public buses: the irregular arrival times and routes that are mainly concentrated in central neighbourhoods, just to name a few. But, I strongly believe that the lack of bus shelters critically contributes to the low number of ridership.

My argument for providing more bus shelters is really simple. Let us look at the kind of weather we’re having in Jakarta. We mostly either get a scorching hot sun or heavy downpour. It’s like the climate here lives by the motto of “go hard or go home”. Safe to say, waiting for the bus while being exposed to these elements is not an appealing option. Not to mention that the presence of a bus shelter means you know where to wait for it.

When Transjakarta started operating in Kemang, I was overjoyed. Finally, I have the option of riding the bus to work. Once, I passed by my colleagues who were chilling and getting their morning coffee near the office before work. So, I smugly waved to them thinking I’m going to end up in the office way before they do.

Soon, I was waiting for a bus that took longer than the average time taken to decide what to watch on Netflix  (study says 18 minutes, you’re welcome) at an unmarked, sans-shelter bus stop. In the end, not only did I walk into the office late and soaked in sweat, my colleagues—their faces radiating with that post-caffeine glow—were already settled comfortably in their seats. One point to my colleagues and a big fat zero to me.

Perhaps, it’s a different story for the footbridge in Sudirman when governor Anies Baswedan ordered the removal of the roof in 2019 for aesthetic purposes. As hot as the weather gets here, crossing the bridge in less than a minute may not be a problem. But waiting for the bus under the direct sun is an agony. It’s as if the riders are being punished for taking the bus in the first place. If it’s common sense to have shelters for above-ground MRT stations, then the same should be applied to bus stops as well.

It’s true that riding the bus or other public transport modes is not considered the first option for most Jakartans. Old habits die hard when many other comfortable options are available, such as online ride-hailing services and taxis. Until there are more incentives, like the simple solution of installing shelters, our habits of delegating public transport as the last resort will endure.