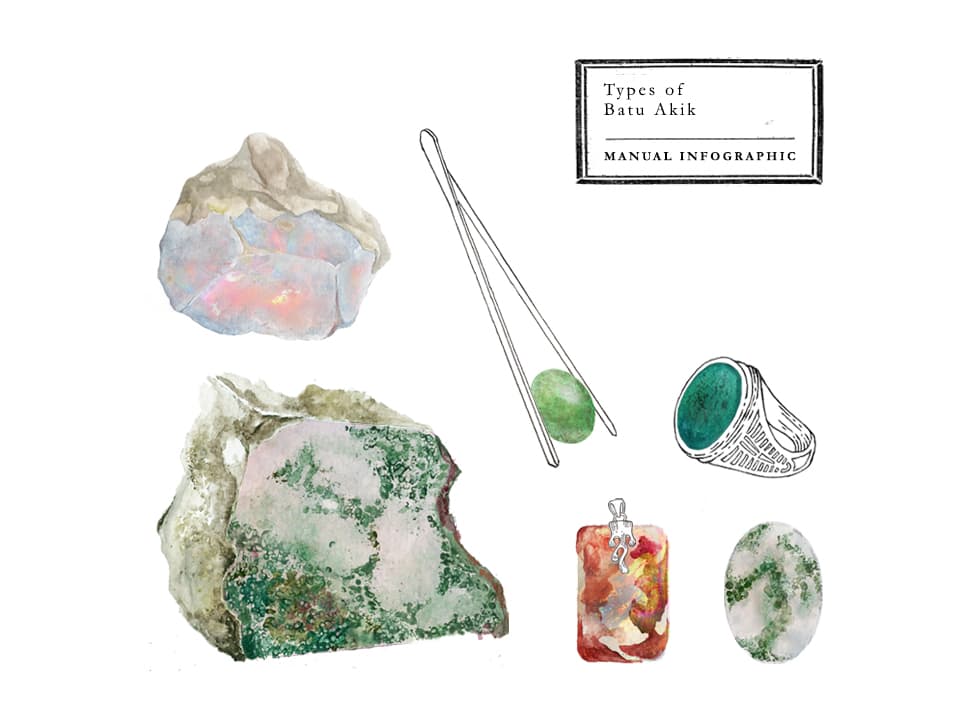 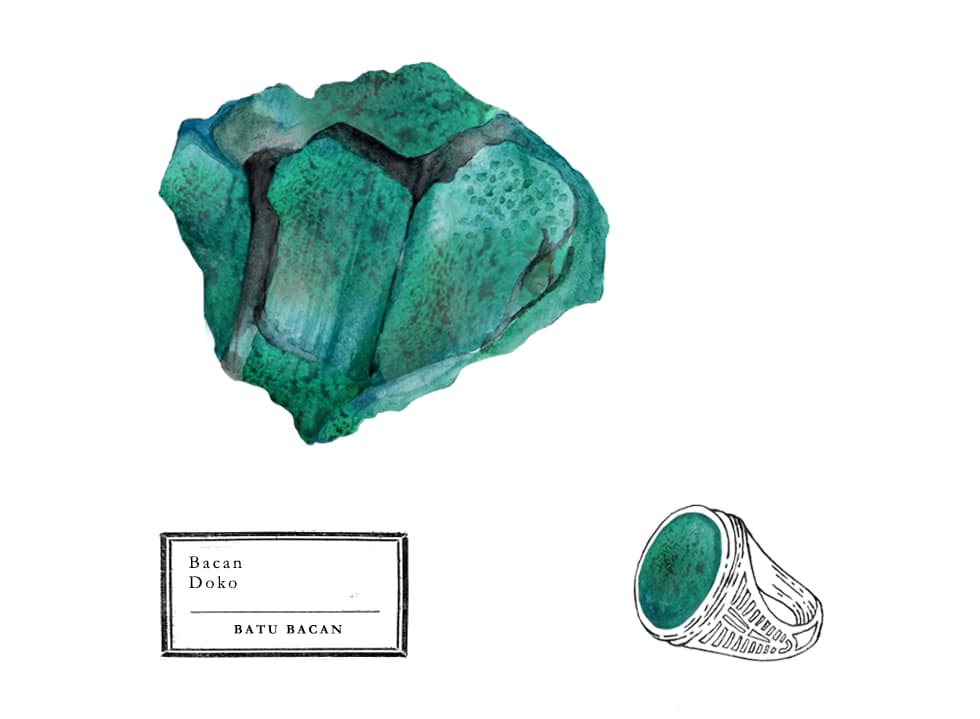 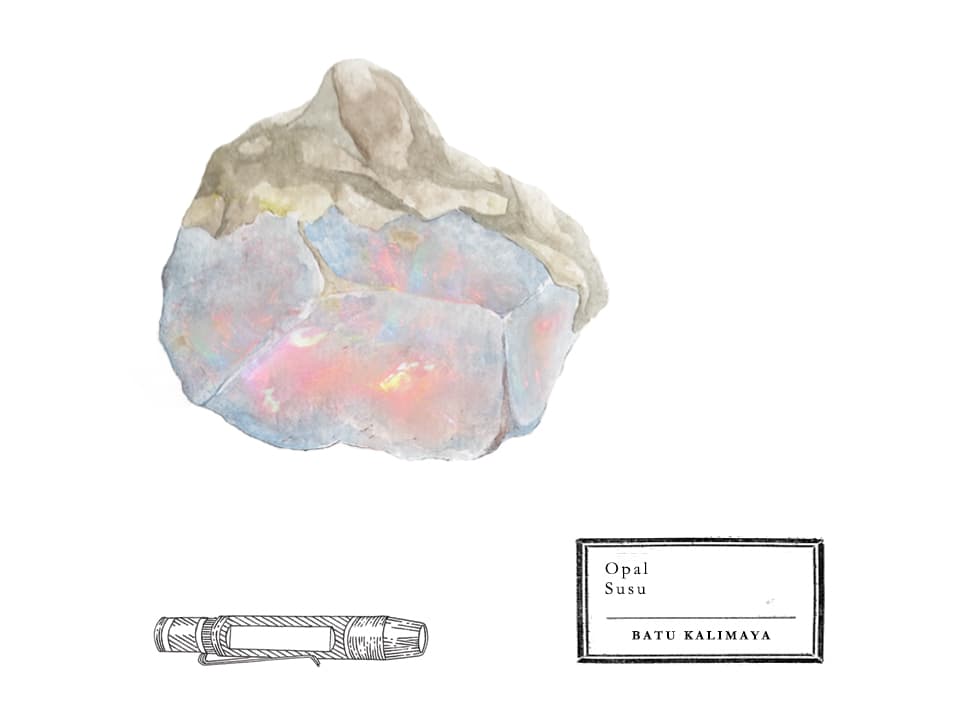 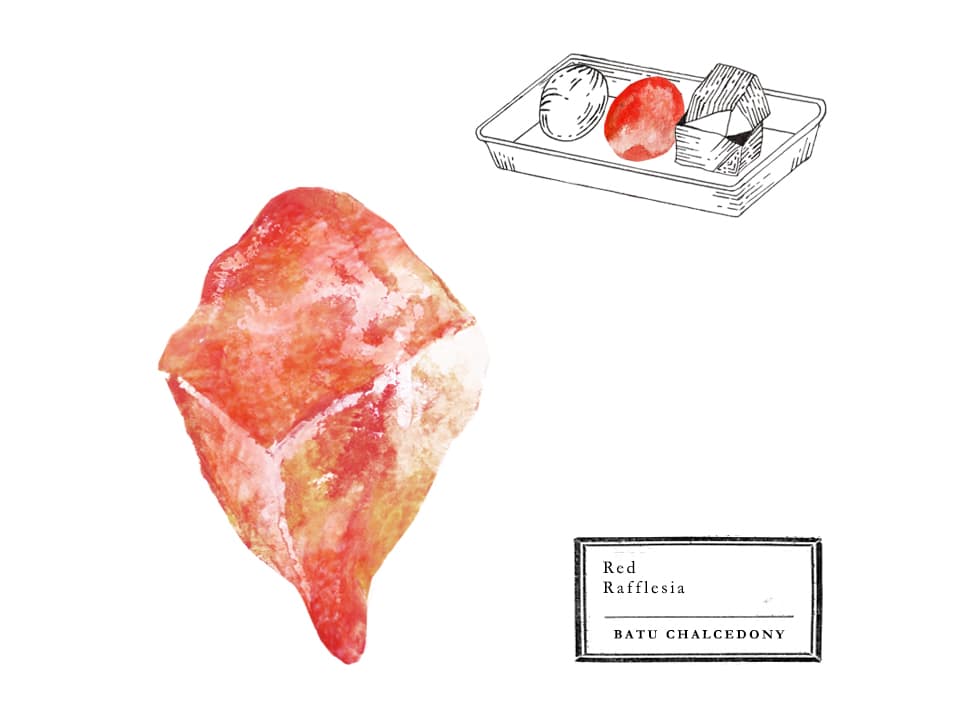 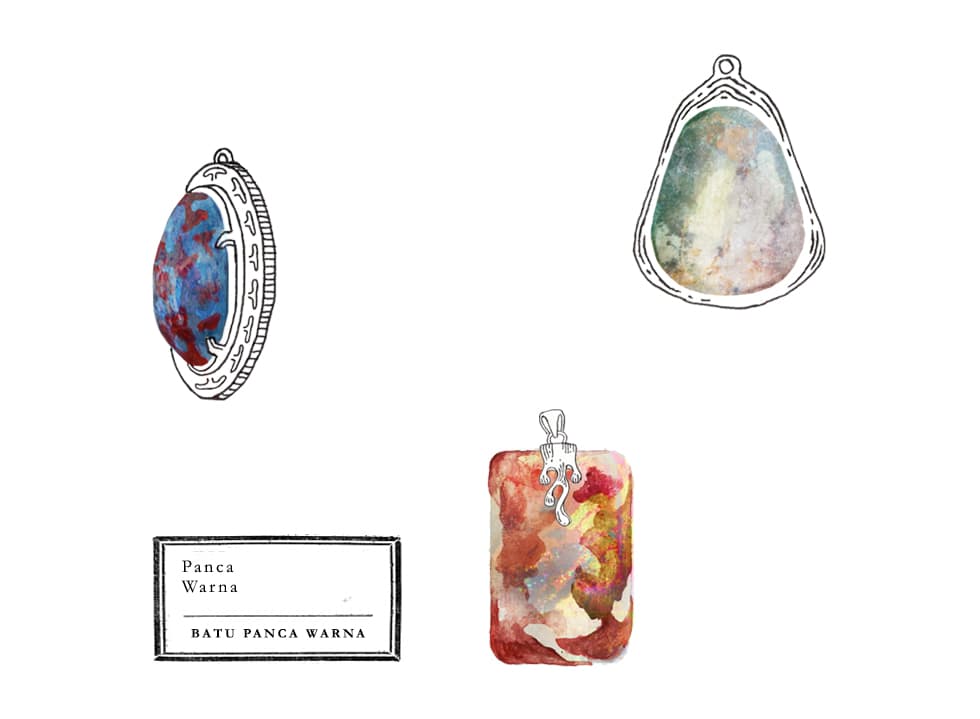 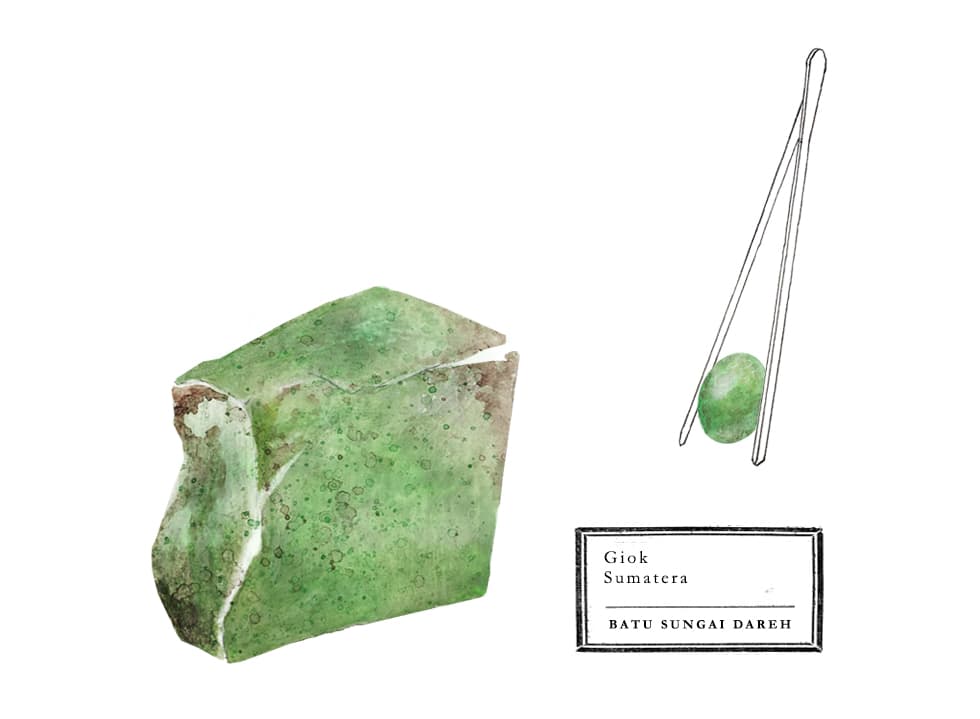 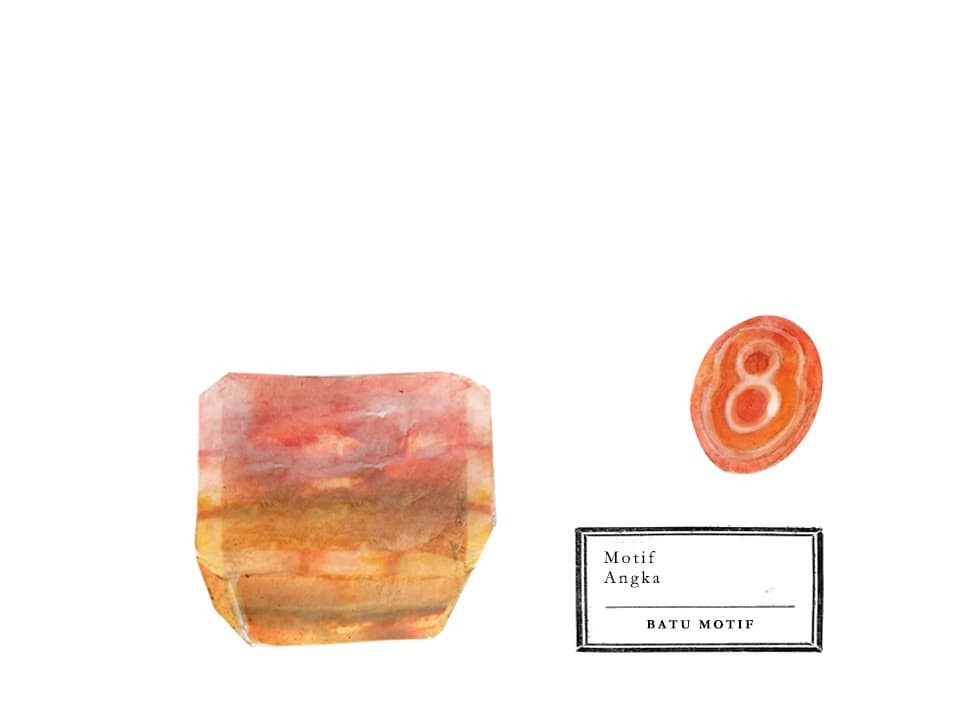 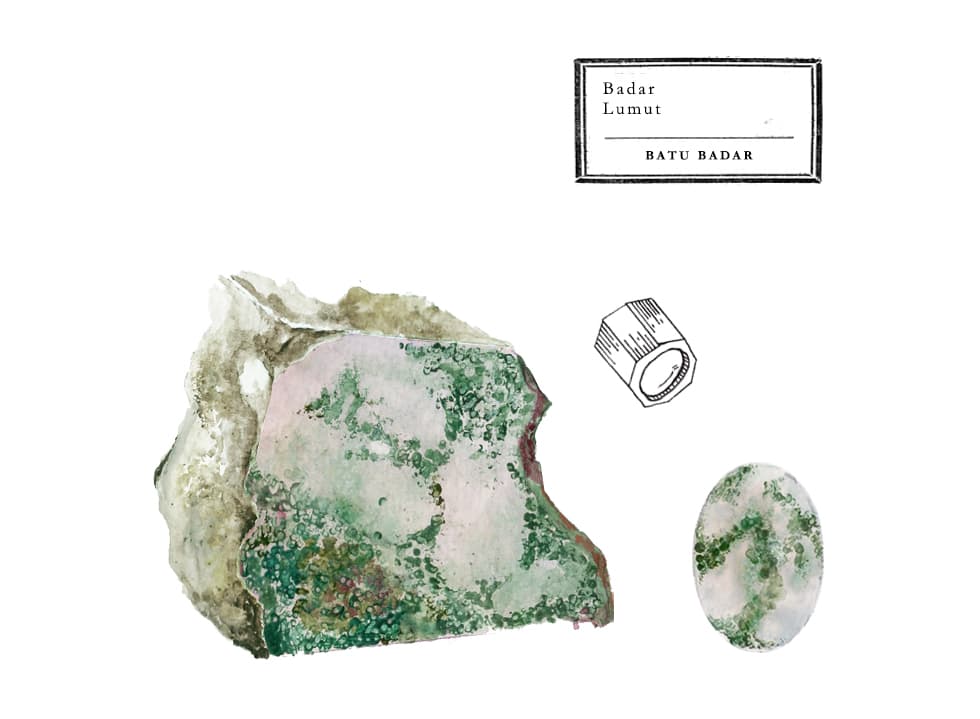 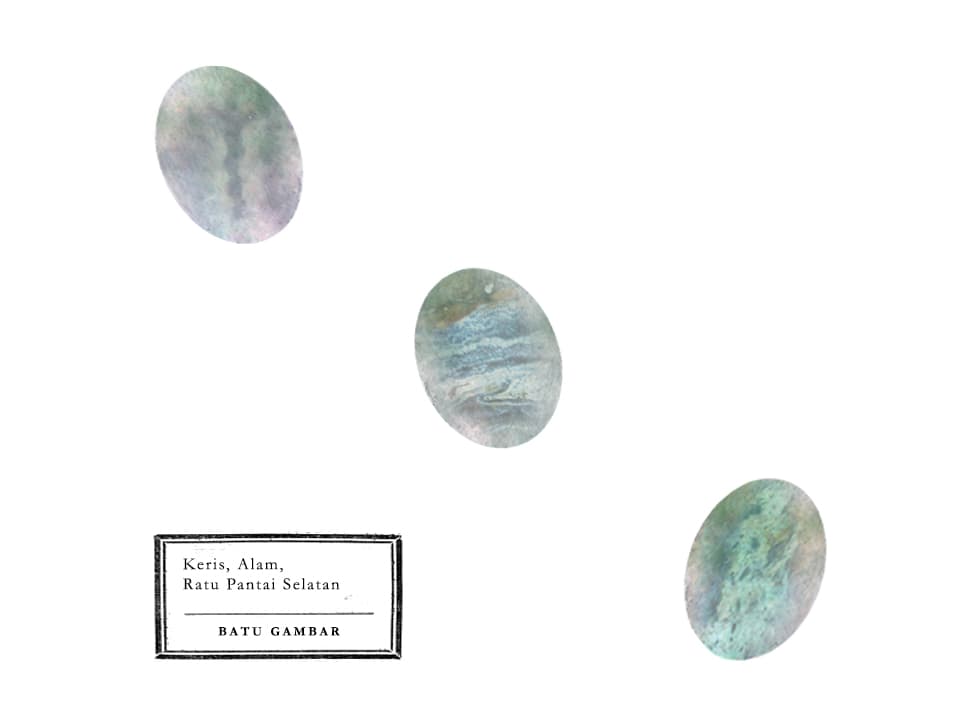 by Pingkan Palilingan
Share
What is batu akik and why should we care? We explained the basics and compiled some of the most popular types of batu akik, all translated into one striking infographic.

You’ve seen it tucked neatly between your dad’s fingers. Indonesian ex-presidents also flaunt it on their fingers. Prince Charles and US President Barack Obama were even spotted wearing this bijou. So what exactly is this gemstone that currently gets everyone in our country obsessed? We spoke with a geologist, a miner, a gemologist, and collectors to give us a little insight about batu akik  and its varieties.

The word akik should be familiar to our ears by now. Everyday we hear people talking about batu akik – or roughly translated as akik stone – and the trend seems to grow bigger without showing any signs of ceasing anytime soon. However intense the conversation between collectors and pedlars about this gemstone, the truth is, there’s still plenty of people who don’t know what batu akik truly is – even for the likes of akik traders or collectors.

The origin behind the moniker akik is very much debatable. Nonetheless, many argue that the word was adopted from Agate, a variety of Chalcedony stone. As time goes by, the meaning of akik has been enhanced. Where before it referred only to agate stone, now the word refers to all semi-precious gemstones (whereas precious gemstones being diamond, sapphire, topaz, etc.).

And no, akik is not a recent fad. Years ago, batu akik ring was in vogue, but after a certain period it waned. Only when our former President Susilo Bambang Yudhoyono gave a batu akik ring as an honorary gift to President Obama did the stone seeped back into our attention again (we’ll get back to this later).

Now then, before we become overly pedantic – and therefore, stops you to read further to the end – we would like to introduce you to some of the most sought-after varieties of batu akik. Hopefully you’ll be able to discern their splendour and understand why people are madly in love with akik, once you’ve lay your eyes upon these beauties.

Bacan Stone (Chrysocolla Chalcedony) derives its name from the place where it was first traded: Bacan Island, which is located in the Moluccas Islands. This stone comes in various shades, though the most popular ones are Bacan Doko (dark green) and Bacan Obi (red). Recently, this stone steps into the limelight thanks to former President Yudhoyono who was seen sporting Bacan Stone ring. It is worthy to note, that the craze around Bacan Stone has gone a little over the top especially when he gave this ring to President Obama not long ago.

No one knows where the moniker ‘Kalimaya’ originated from, but this stone has been known with the said name ever since it was unearthed in the hinterland of Banten. You might have heard of its universal name though: Opal. For generations, Opal has bedazzled many gemstone hunters mainly because of the galaxy-like sparkle this stone reflects.

Red Rafflesia (Carnelian Chalcedony) is found in Bengkulu, Sumatera. The name is a reference to the stone’s red colour that resembles the colour of Rafflesia arnoldii, Indonesia’s National Flower as well as the symbol of Bengkulu Province. This stone is known globally as Carnelian, a variety of Chalcedony stone.

Panca Warna means ‘five colours’, which refers to the multi-coloured characteristic of this stone. The popularity of this stone has seen an upsurge recently right after the 2015 Asian African Conference Commemoration. As the host country, Indonesia gave each guest country a Panca Warna stone pendant as a souvenir. It is believed that this stone is popular among country leaders because of its ability to increase one’s charisma.

Again, a stone that becomes famous thanks to Sir Yudhoyono. Better known worldwide as Idocrase, rumour has it that President Obama was once spotted wearing Giok Sumatera ring. Though it hasn’t been proven yet, it is indeed a smart marketing strategy that causes this stone’s popularity shooting skyward.

As the name suggests, this stone is practically any kind of stones that have a repeating motifs or patterns. Among the popular ones are lotus flower motif, number motif, and dragon’s scale motif.

Batu Badar comes in various types, but the most prominent are Badar Lumut (Moss Agate) and Badar Besi (Hematite). These two stones are often told to own mystical powers. Badar Lumut, for instance, is believed to bring victory to its bearer whereas Badar Besi is said could ward off bad lucks and black magic.

Indonesians tend to gyrate towards the mystical. Thus, the more mystical values a gemstone possessed, the more popular it is. Batu Gambar or Batu Akik Gambar simply refers to any sorts of akik stone with distinctive ‘picture’ that is naturally inscribed on the stone’s surface. That’s why as the picture gets more intricate, the higher the price would be. Some of the most popular Batu Gambar in Indonesia has the picture of Nyai Roro Kidul, also knows as Ratu Pantai Selatan (Queen of the Southern Seas, a mythical female spirit who inhabits the ocean on Southern Java Sea) and mountain view etched naturally on the stone’s surface.