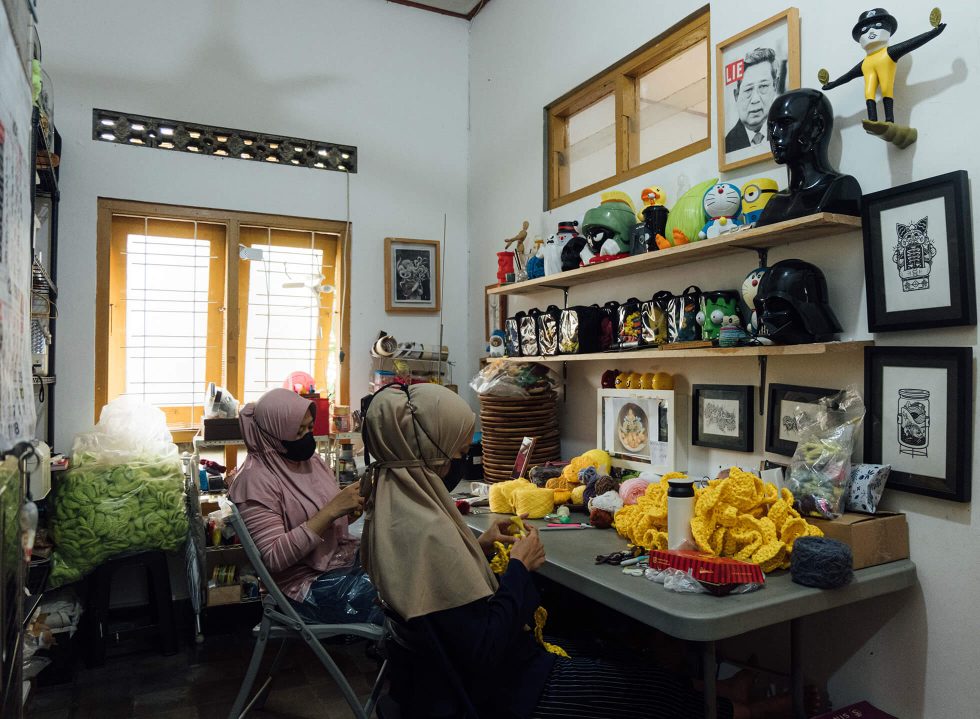 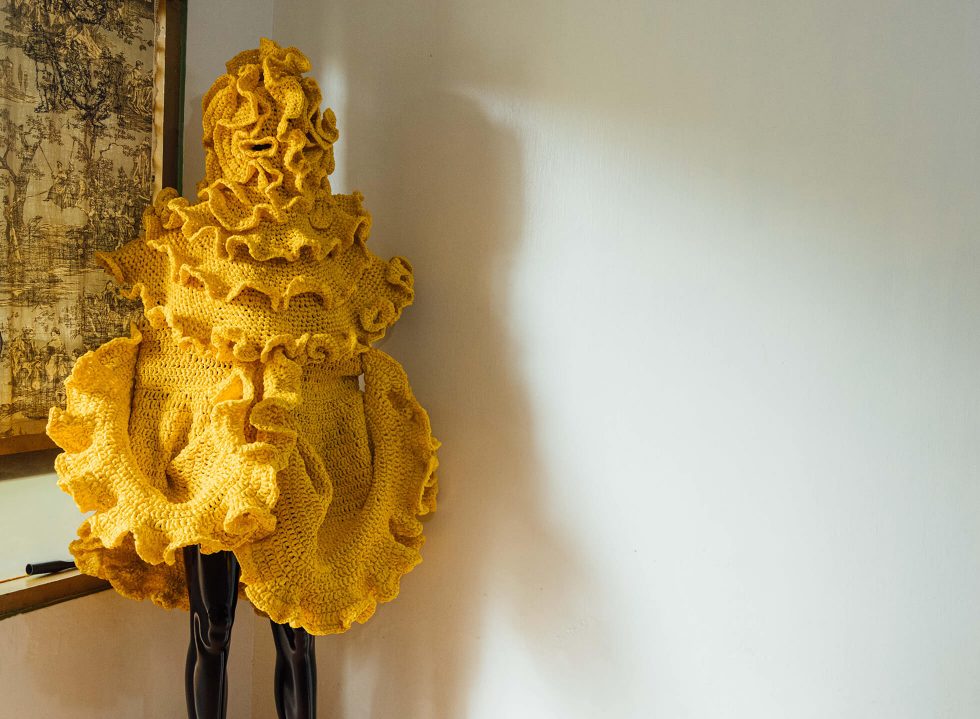 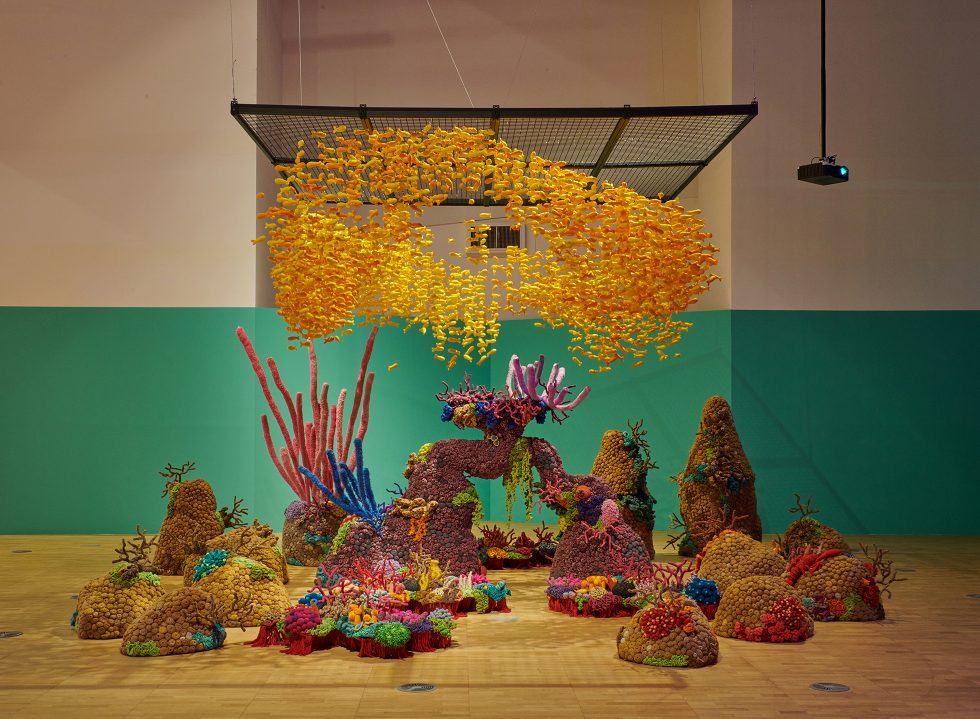 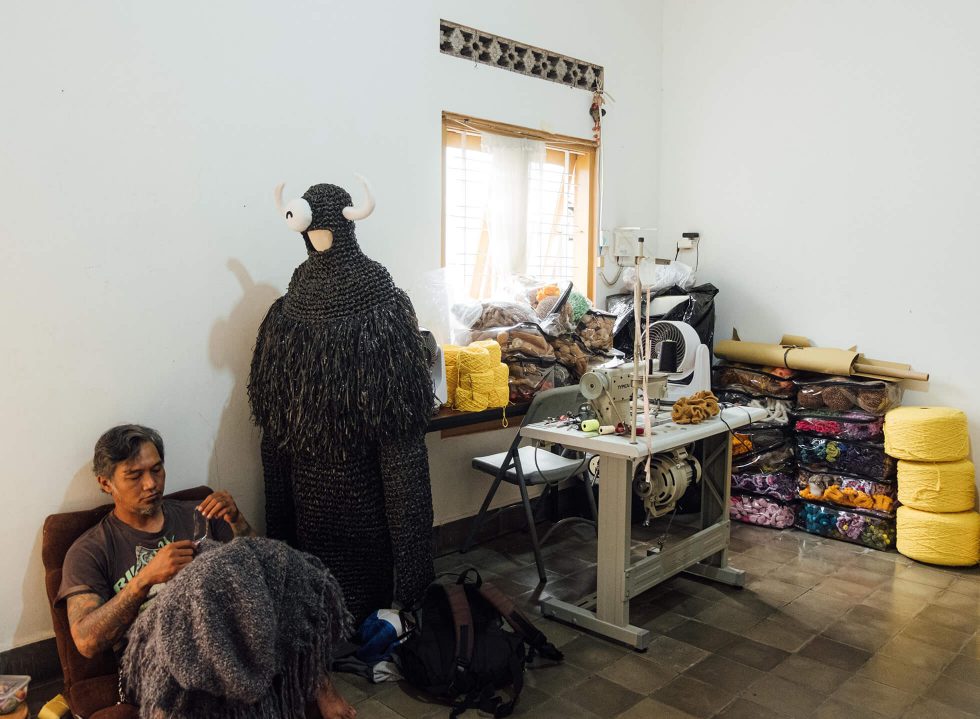 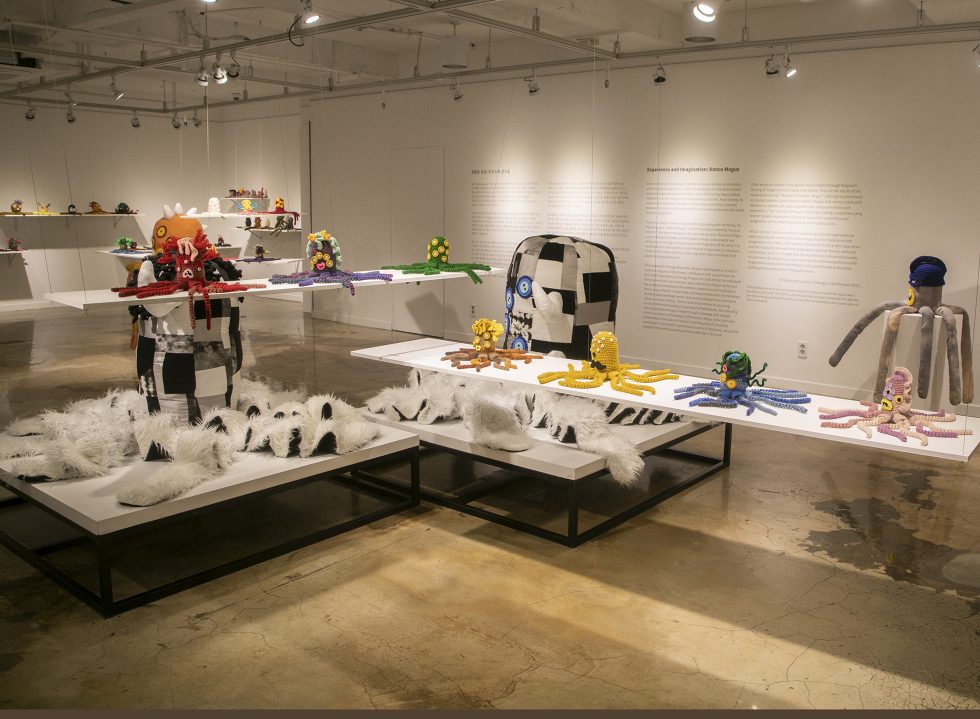 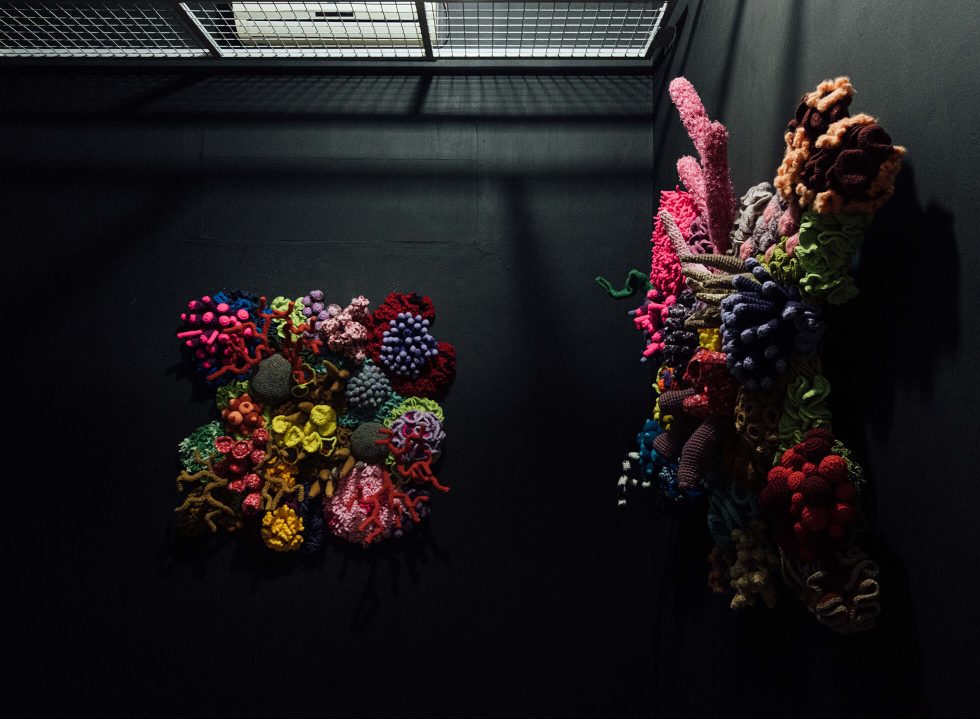 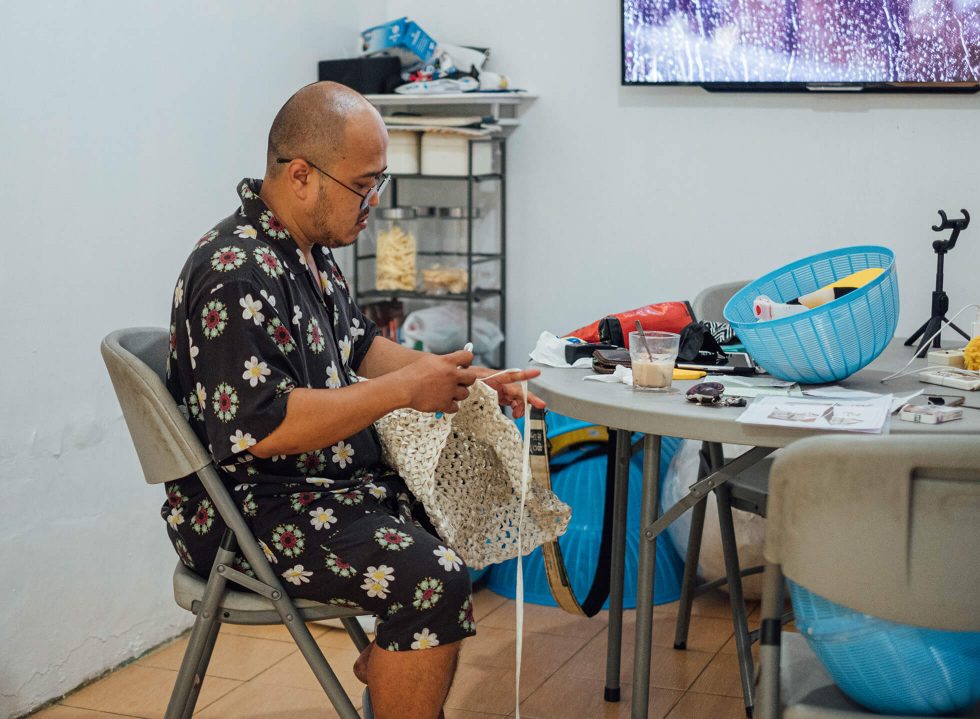 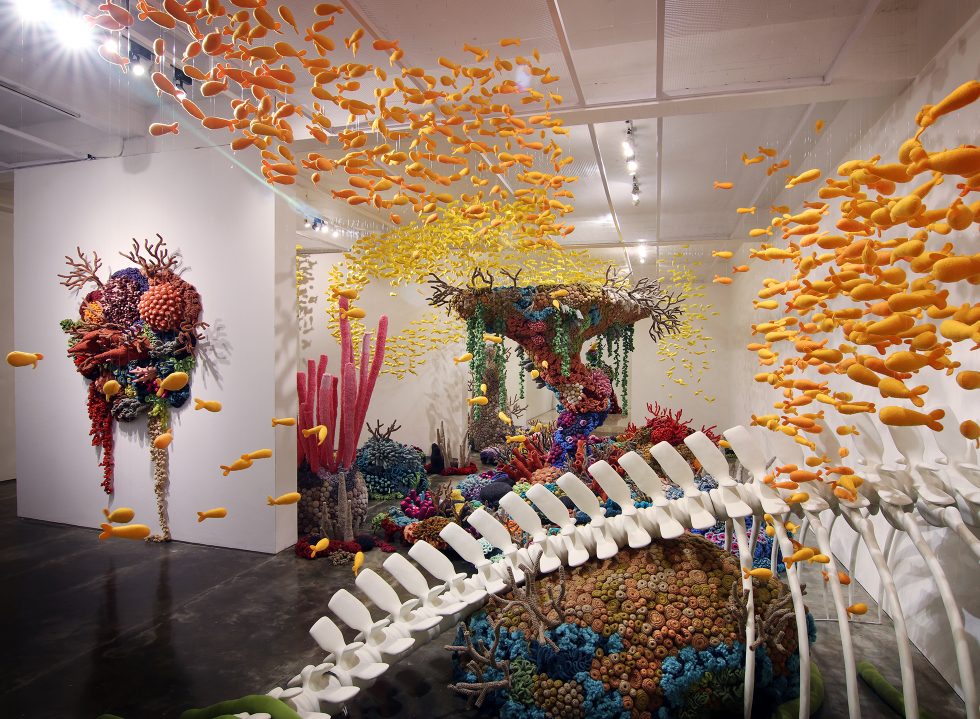 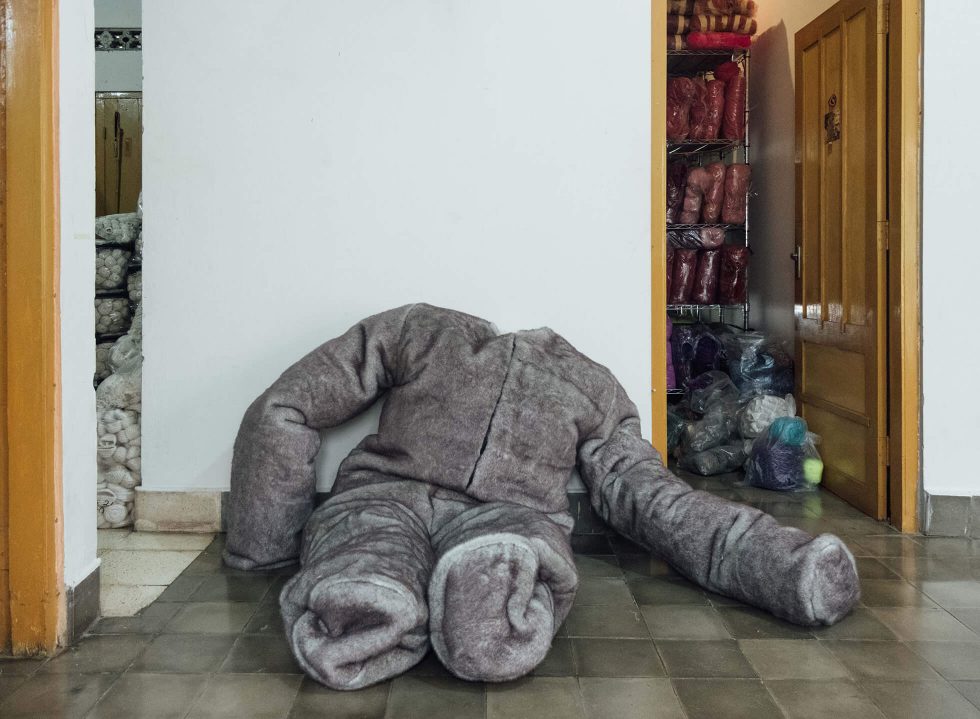 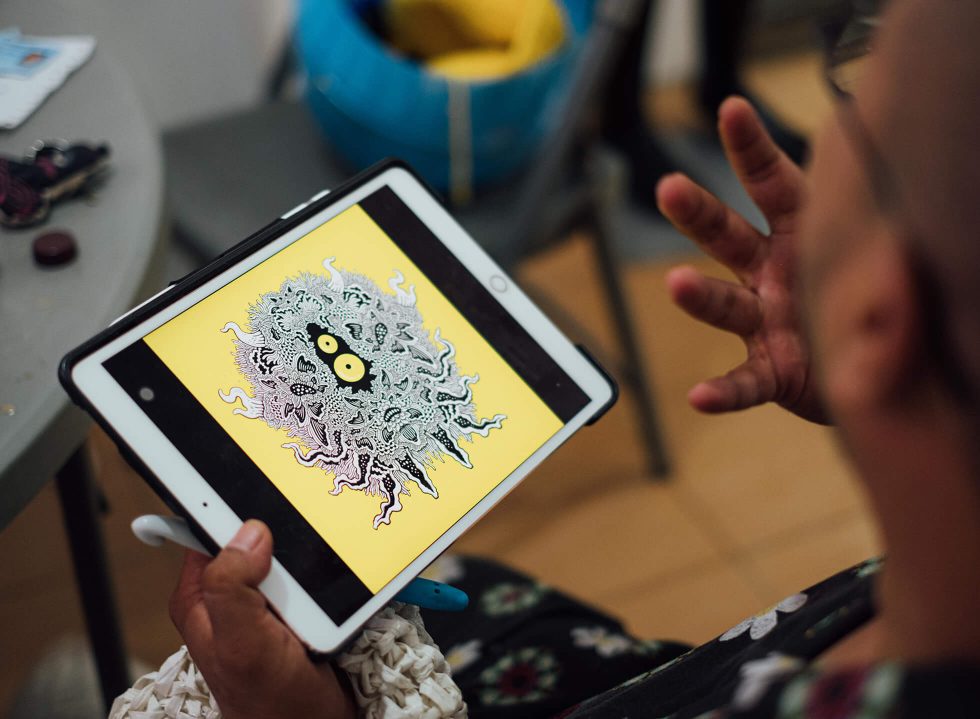 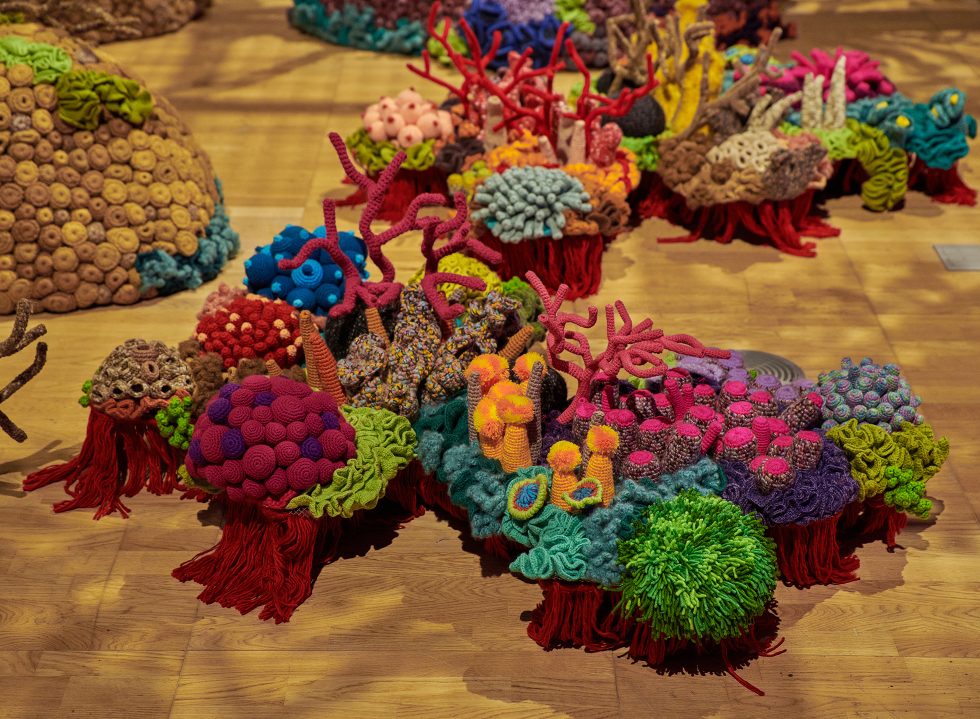 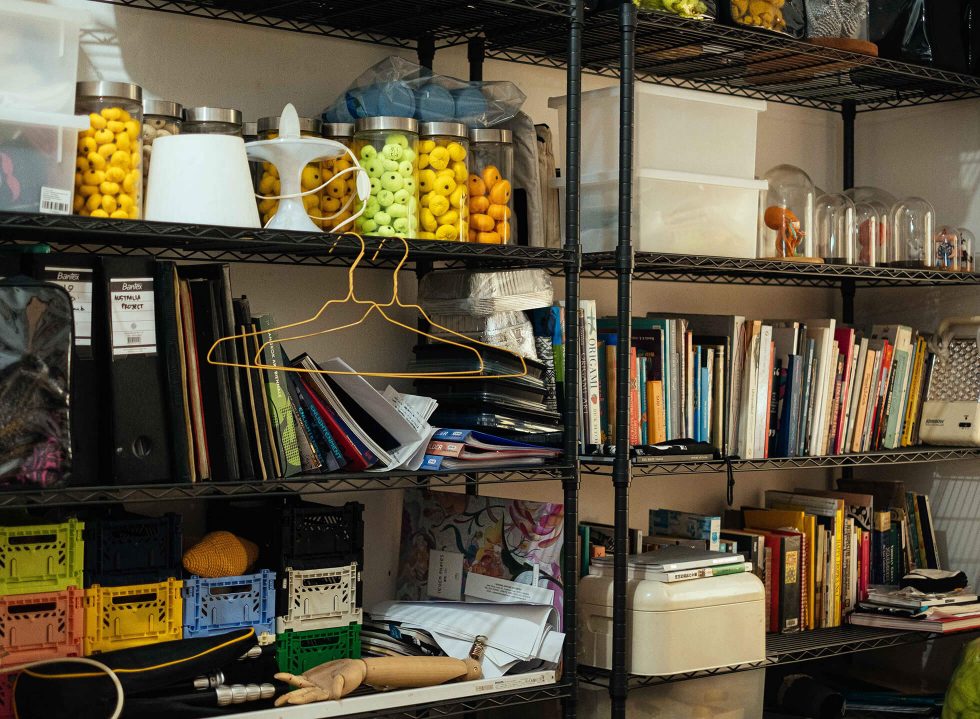 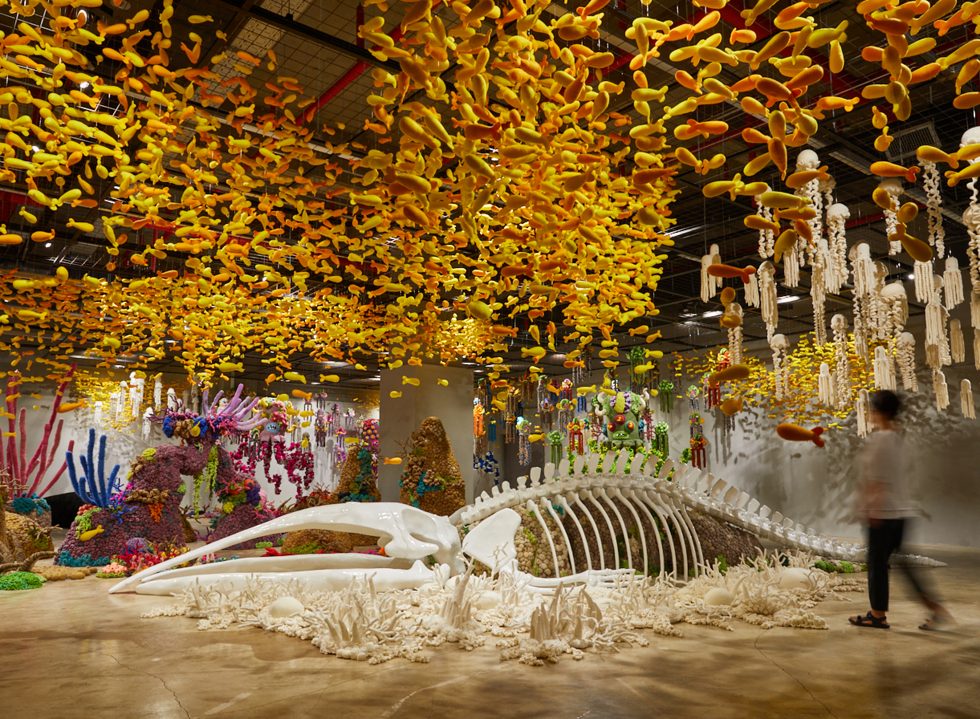 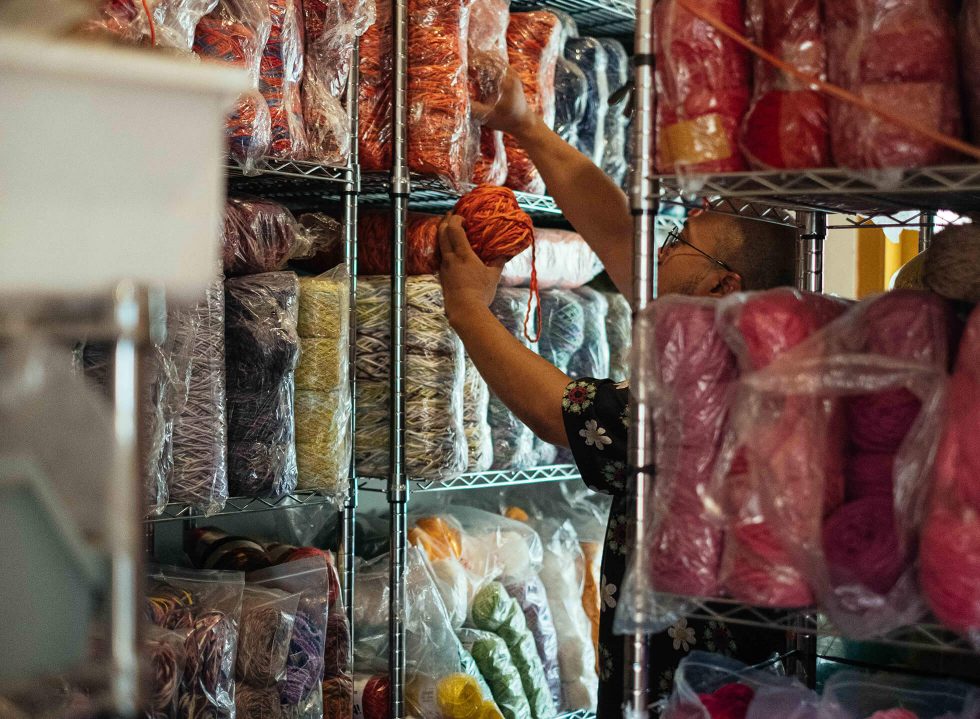 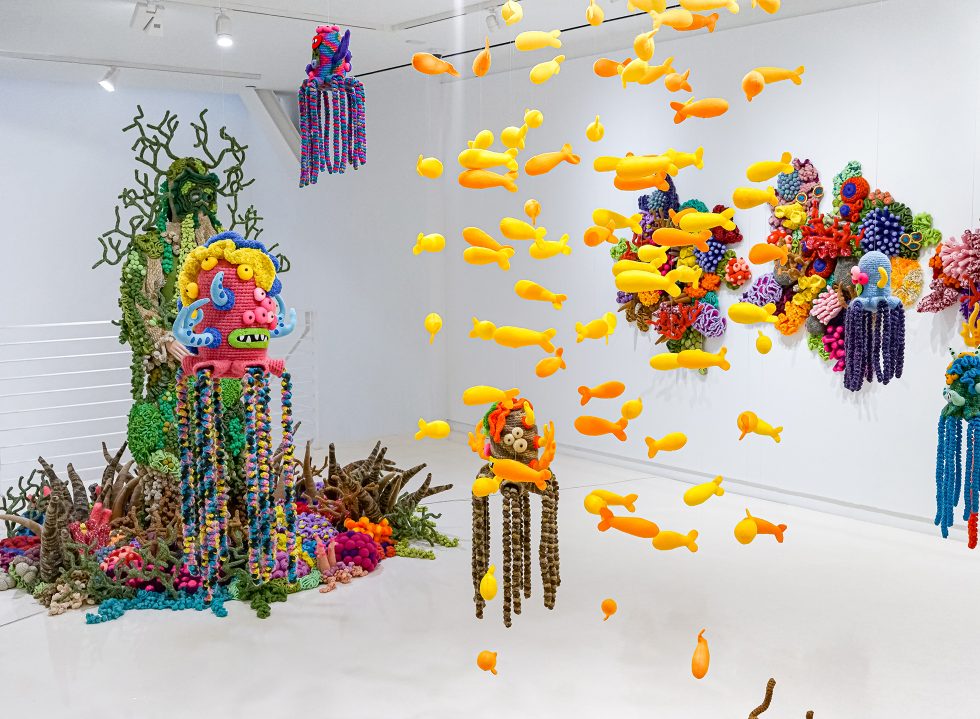 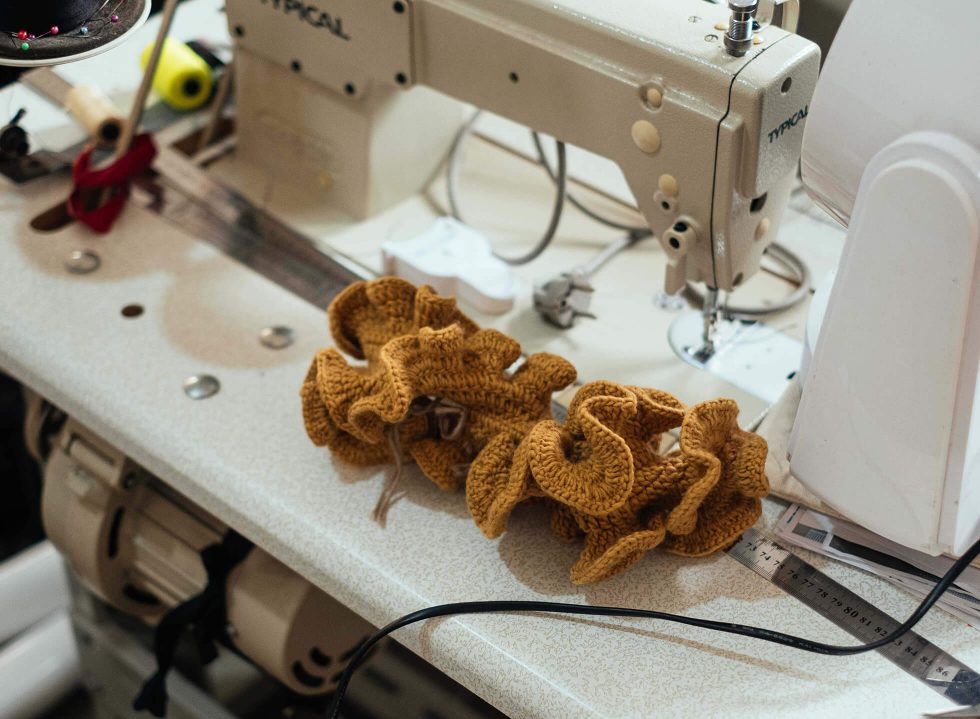 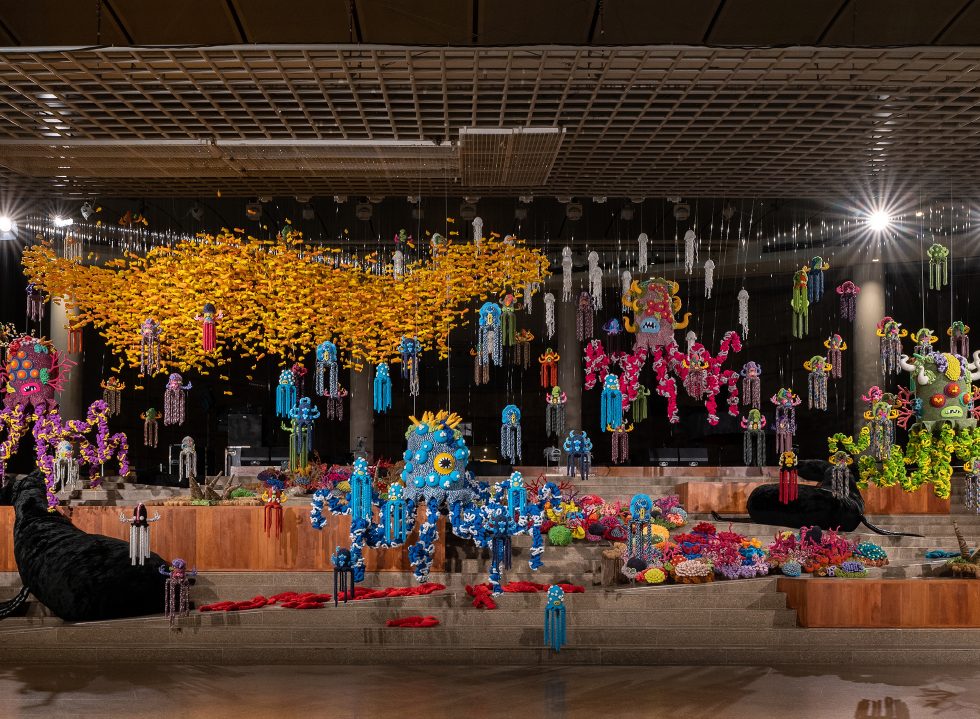 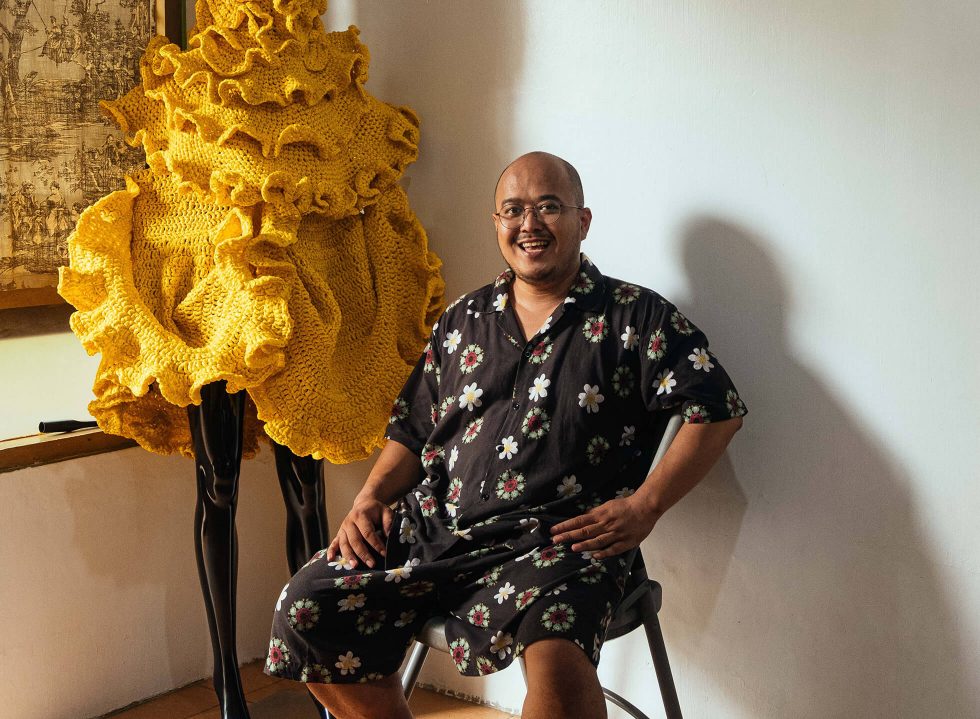 by Hilda Nathalia Raina
Share
Contrasting textures, colours and shapes abound in Mangmoel’s sea-scape installations. Amidst the digital wave, his series of hand-knitted underwater creatures and their detailed habitats reimagines the aquatic landscape and forms a world of its own.

Thousands of hand-knitted modules connect Mangmoel’s underwater world to life. In a sea of colours and textures, elements such as crocheted balls, ringlets and tube structures come together to flesh out the habitat for his oceanic creatures, namely ‘mogus’ or ‘monster gurita sigarantang’ (Mangmoel’s family name), his octopus-inspired alter ego and the star of all his work.

First realised into a miniature doll using knitted pompoms back in 2008, the mogus has since been an inseparable marker of his craft. Swapping features from funky hairstyles and toothy grins to antlers, each one is given its own name and colour combination on the whims of Mangmoel’s imaginings, which the Jogja-based artist likes to document and share online.

Growing up in Bandung, Mangmoel was a frequent visitor of Tobucil, or ‘Toko Buku Kecil’—a bookshop slash community space for young, emerging local creatives—where he first pursued origami before finally sticking to knits and crochets. His fixation soon earned him the nickname ‘mulrajut’, or ‘knitting mul’.

“Many see knitting as a slow craft and it is! It definitely takes time but it’s never boring. Behind even the smallest piece, there is much people don’t see—the calculations, patterns, patience and precision.”

Surrounding themes of marine life, his installations map out fantastical aquatic landscapes modelled to reflect the awe akin to one of those discovering the underwater world for the first time. “I remember when I tried snorkelling, I was really struck by the details and the symphony of colours that coexist in this mysterious world that I’ve only ever encountered on books and TV screens,” the artist enthused.

One of his most memorable works is a commissioned piece for ARTJOG 2018, a crocheted 8-metre installation titled Sea Remembers. Realised using 4000 rolls of yarns and up to 70 knitters in the span of six months, the installation sees hundreds of yellow fishes suspended mid-air. Surrounding them are knitted structures pieced and overlapped together to form multicoloured reefs and coral islands, alongside a skeletal frame of a whale propped on the side.

“I was really struck by the details and the symphony of colours that coexist in this mysterious world that I’ve only ever encountered on books and TV screens.”

Beyond the initial sense of wonder, the textile artist employs vibrant colours as an entryway to convey a deeper meaning, addressing a sense of fragility and destruction that confronts the sea; from pollution to concerns surrounding the global climate. When encountering his work, he hopes that his audience can look deeper and “reflect on their interactions with nature. I believe we were always created to live in a way that nurtures one another, as one.”

Earlier this year, his installations were showcased to a set of new audiences: the gallery-goers of Sapar Contemporary Gallery in New York as part of a solo exhibition titled ‘Mulyana: Fragile Ecologies’. Displaying two of his life-size knitted costumes, the show adds to his repertoire of international exhibitions, from Esplanade in Singapore and Cheongju Craft Biennale in South Korea to Orange County Museum of Art in California.

Putting international recognition aside, the textile artist continues to approach knitting as a humbling, meditative act, and he embraces its unhurried quality. From early on in his career, Mangmoel understood that this isn’t a practice he can develop on his own. In 2014, he established his mogus family or ‘konco mogus’, a growing collective of craftswomen and knitters all based in Jogja, whom he trains and now helps him in the studio.

“I believe we [humans and nature] were always created to live in a way that nurtures one another, as one.”

“The value of art should always extend beyond the exterior and what it looks like. In an age where everything is mass-produced and quickly attainable, it’s very important to acknowledge what goes on beneath the surface: the community that shaped it and every single hand that played a part in its creation,” Mangmoel emphasised.

Just this month, Mangmoel wrapped up production for his collaboration with Indonesian singer-songwriter Tulus in creating the music video for his latest track, ‘Hati Hati di Jalan’, which features two of his knitted costumes as main characters.

Yet, despite working with a very tactile medium, Mangmoel does not view the shift to digital art in opposition to his craft. Instead, he acknowledges the “opportunities it has opened up for artists and makers, as well as the renewed sense of dialogue exchanges and spirit of creating it sparked.”

Occupied with preparations for a few upcoming exhibitions later in the year, he was quick to share how the jump to digital as his potential future medium is something he’s “very open to. I haven’t quite figured out how my work and style would translate through these new mediums, but I see a lot of potential areas to experiment and show a different side of my craft.” 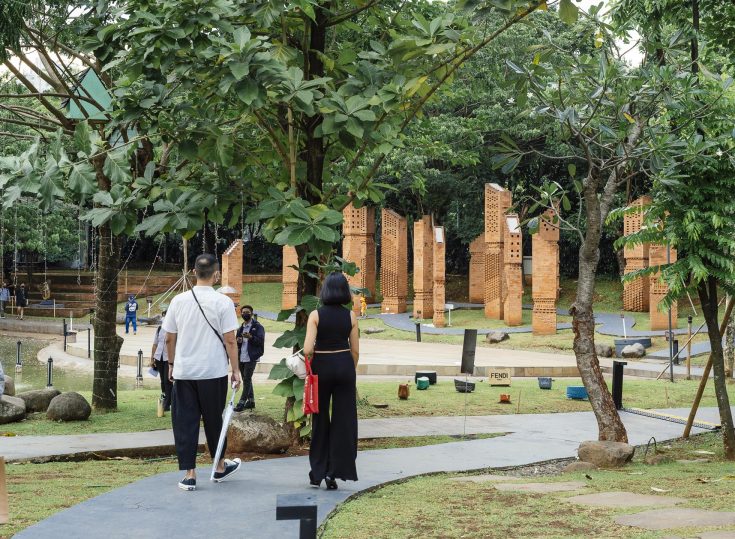