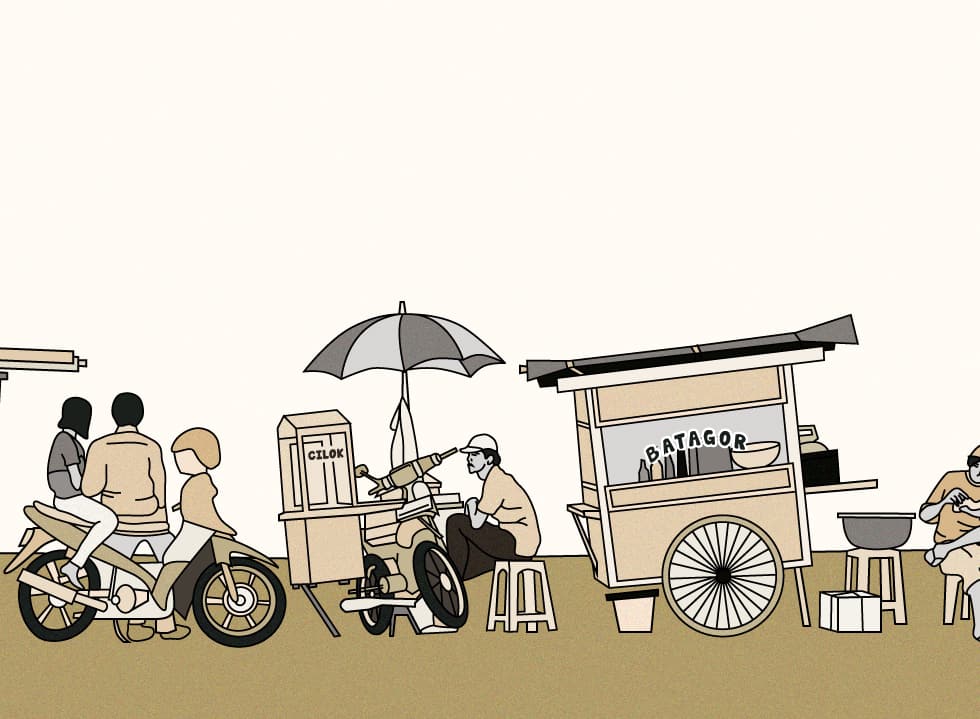 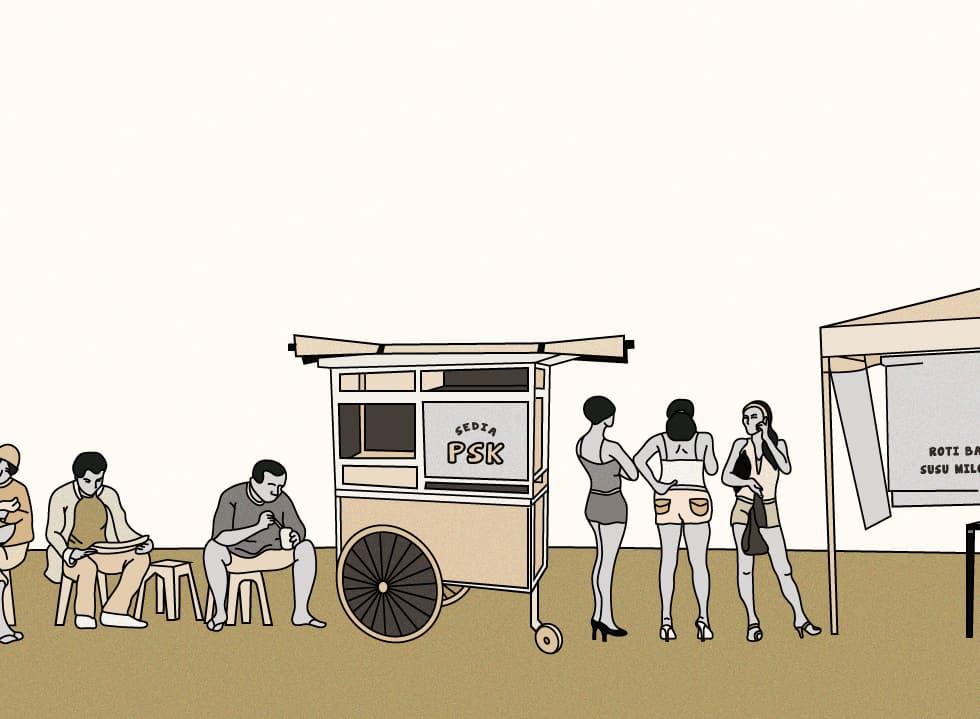 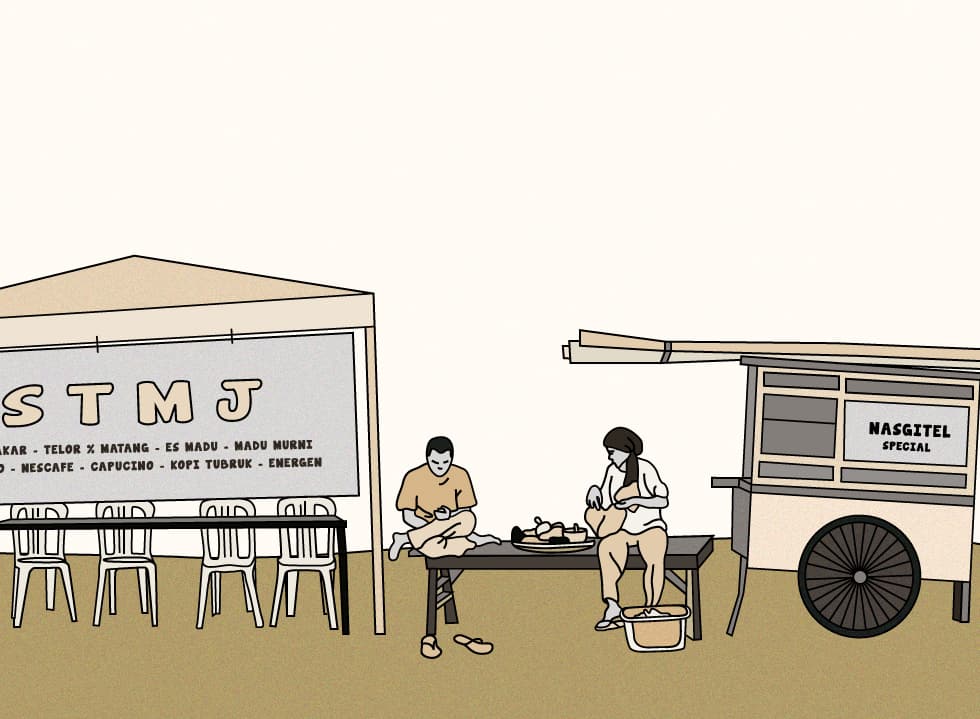 by Adithya Pratama
Share
Here’s a quick glossary to get yourself acquainted with ten of Indonesia's most popular street food slangs.

Being the most diverse street food scene in the world, Indonesia housed hundreds of dishes served and sold by the street throughout the country. These vendors are popularly known by the term “Kaki Lima” which refers to the size of pedestrian sidewalk –five feet.

When faced with some of the dishes’ names, it’s normal for one to raise an eyebrow for its eccentric and comical terms. By merging the ingredients used or giving short acronyms, most of these creative ideas hail from the Sundanese –particularly those in Bandung, which are famous for their sense of humor and snappy jokes comebacks.

Here’s a quick glossary of 10 street food lingos that will allow you to impress your peers while portraying your fearsome street food credibility at the same time.

A popular post-club treat, an Internet is a plateful of Indomie –Indonesia’s most popular delicacies and exports, of your choice cooked together with a roughly poached egg and spoonful of tinned corned beef. Commonly found in warung that operates from dusk till’ dawn, other variations of Indomie sold comes with several other quirky terms such as Intel (Indomie Telur), Indomie Tante (Tanpa Telur) and Interkom (Indomie Telur Komplit). When gracing such warung, don’t miss out on Martabak Mie, a thick and fluffy egg omelette composed with cooked indomie and seasoned with its MSG rich seasoning.

Commonly found in Bandung, Cilok is a dish consisting of tiny little seasoned rice flour balls that is served with sambal kacang (spicy peanut sauce), saos sambal (chilli sauce) and kecap manis (sweet soya sauce). With its chewy texture, this delicacy is highly affordable and the current versions of Cilok also consist of stuffing the bites with minced meat, chilli, peanut and even sausages. The word Aci means rice flour in Sundanese and Dicolok refer to the way the dish being eaten; by piercing it with bamboo skewer.

You read it right, that’s how the name was born. The dish consists of peyeum bakar (grilled fermented cassava popularly known as tapé) that is dipped (dicocol) into grated coconut and palm sugar syrup served alongside. Method of enjoyment is where the name is sourced. As flirty as it may sound, refrain from using it as a pick up line.

Originating from Bandung, Batagor is a delicacy most Indonesians are familiar with. The dish composed of minced ikan tenggiri (Spanish Mackerels), rice flour, spring onions and seasonings. This mixture then wrapped in a wonton skin forming a cup-like shape or filled into a cavity of a firm white tofu. Prior to deep-frying, these wontons and tofu were steamed until cooked – commonly known as Siomay at this stage. Most of the vendors in Bandung have half-cooked options for Jakartans to take away and deep-fry them at the leisure of their own kitchen.

The term “Cari Uang Jalan Kaki” that translates to “earning money by walking”, is derived from the olden days vendor that sells this rainy day treat on two small carts – carrying hot soup and condiments, that are pivoted onto their shoulder with a single wooden stick. Cuanki itself is similar to Bakso. And just like Bakso, the dish is completed with chopped celery, fried shallots and, of course, sambal. Contrary to its name, most of the Cuanki vendors these days own a small warung with a few seating for their patrons.

A short term for Pekerja Seks Komersil (Commercial Sex Worker), the term was then adapted by sate vendors in Puncak, West Java as a ‘cute’ marketing gimmick. PSK in this context stands for Pondok Sate Kiloan that derived from the method of counting the Sate – not by stick or portions, by kilograms. This sate usually comes in two options; chicken or mutton, although some establishments offered beef and even rabbit meat. Served with either peanut sauce or plain old kecap manis with slices of shallots, chili and tomato, nothing differs PSK from any other Sate vendors. But the peculiar name sure does attract more customers into their doorsteps.

Commonly found in most nighttime warung in streets of Java, the warm concoction of Susu (milk), Telur (egg), Madu (honey) and Jahe (ginger) is known as a sexual enhancer elixir for men due to its protein rich composition. Apart from the stamina enhancing property, the drink is often taken when feeling under the weather or to keep the cold at bay.

Nasgitel is a common way for most places in Yogyakarta to serve a cup of hot tea. The tea leaves were brewed and boiled together and left to steep for a little bit more to create that highly concentrated tea flavor – that sometimes taste a little bit bitter and more kental/kentel (thick). The tea is then given an extra dosage of sugar to suppress the bitterness. The result is a sweet (legi), highly concentrated, boiling hot (panas) tea just the way the Javanese likes it.

Combro is another deep fried delicacy favored by many Indonesians made out of grated cassava, grated coconut and tapioca flour dough that are filled with savory mix of oncom (highly fermented soy bean cake) and chili. The round-shaped cake is then deep fried and eaten warm with the extra spicy cabe rawit (bird’s eye chili). The name means “Oncom Inside” (dijero is Sundanese word for inside), declaring what’s hidden beneath.

Misro is the sweeter sister of Combro. The similar cassava dough is filled with palm sugar that gives a caramel-like liquid after deep-frying. Similar to that of Combro, the name describes the sweet filling inside; Amis means sweet in Sundanese. The two sisters have a very similar look, so it’s best to reconfirm with the vendor to avoid mistaking the two.