Into the Starling Business - Manual Jakarta 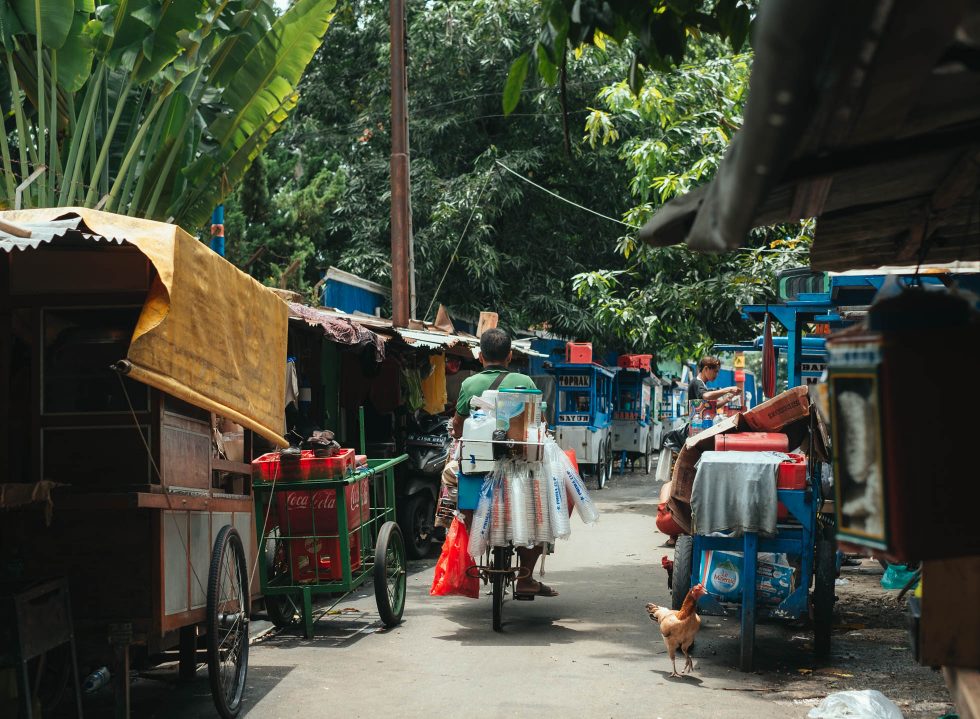 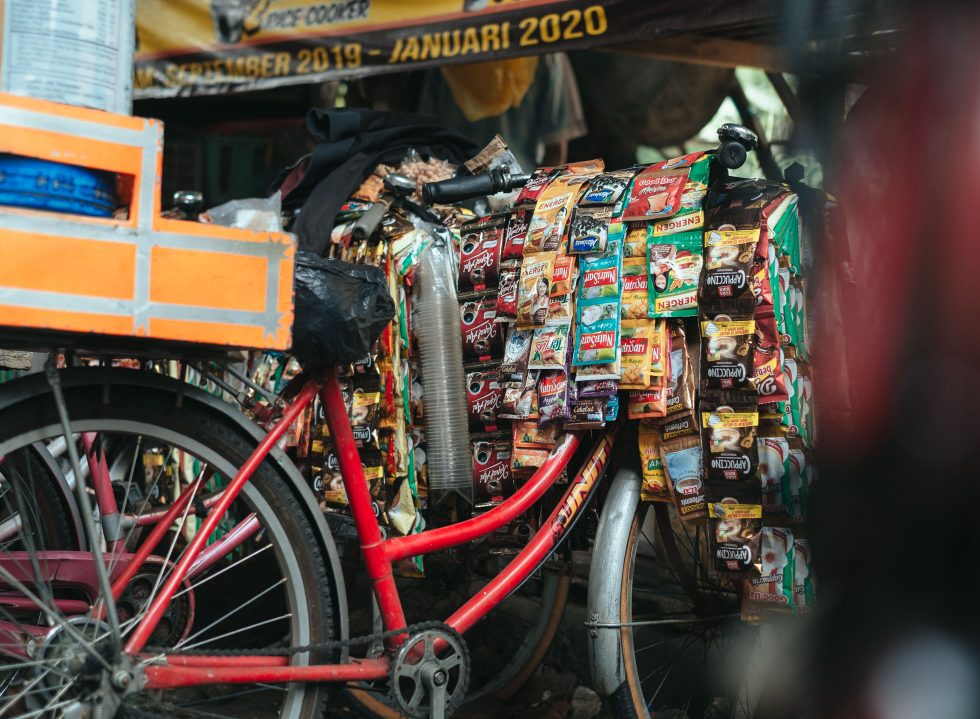 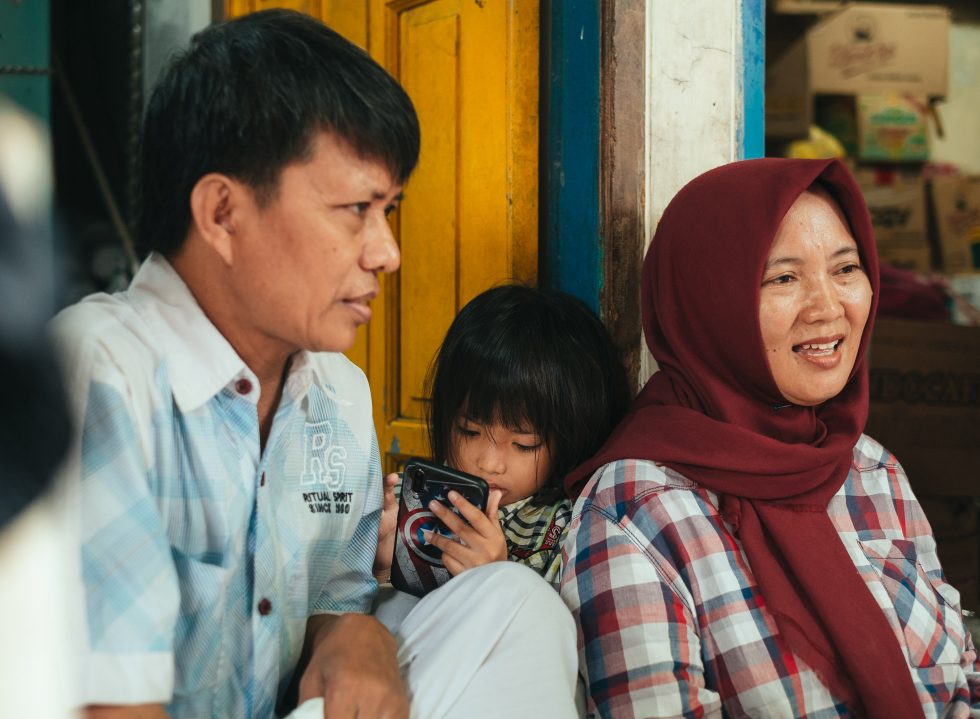 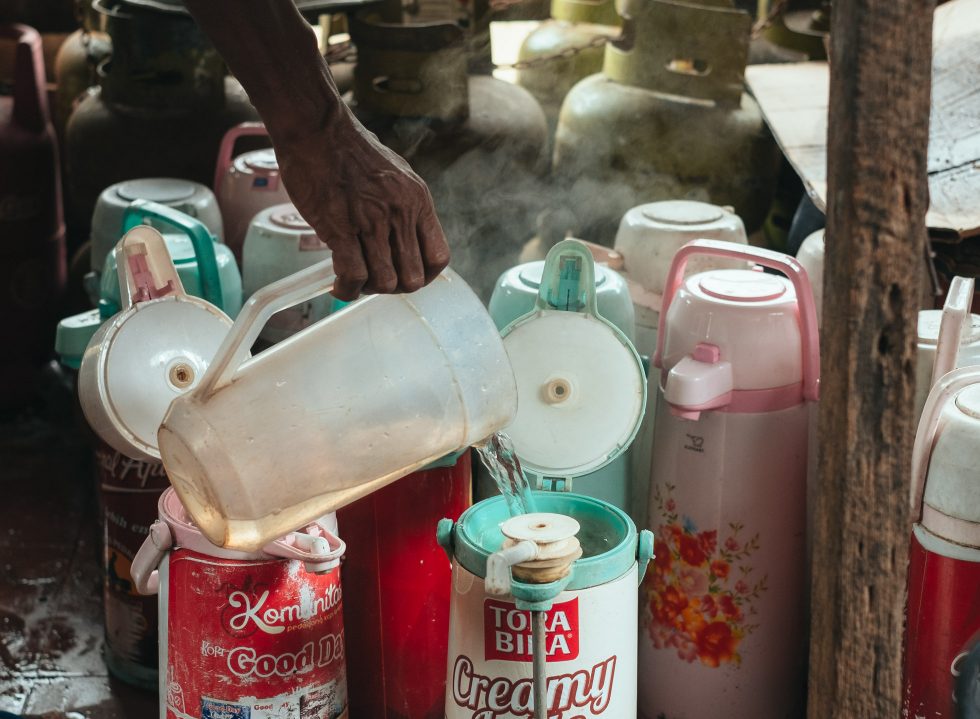 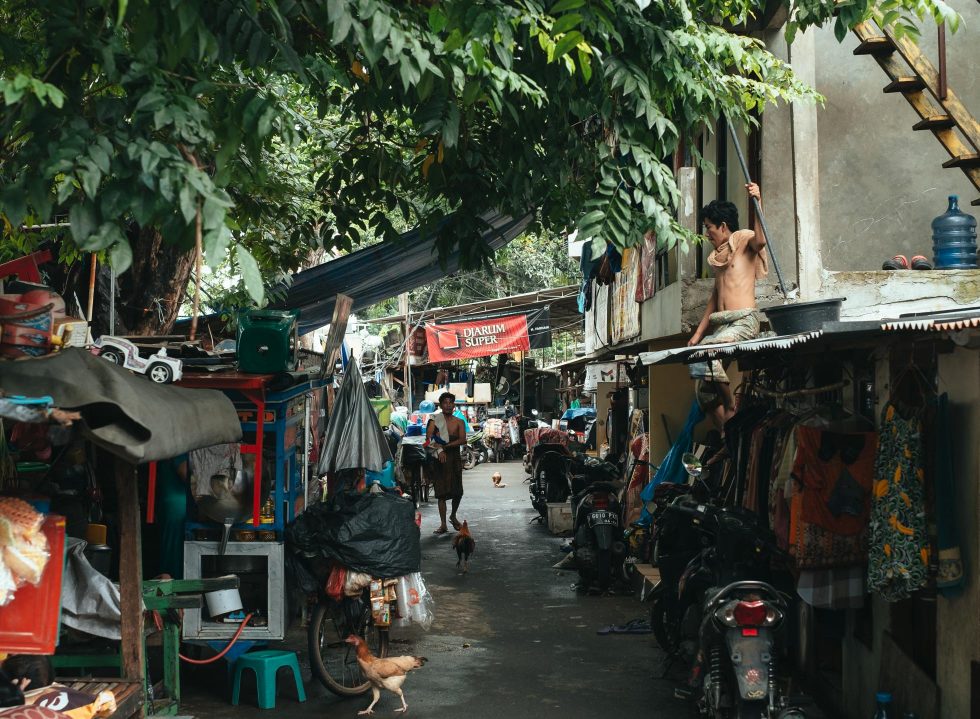 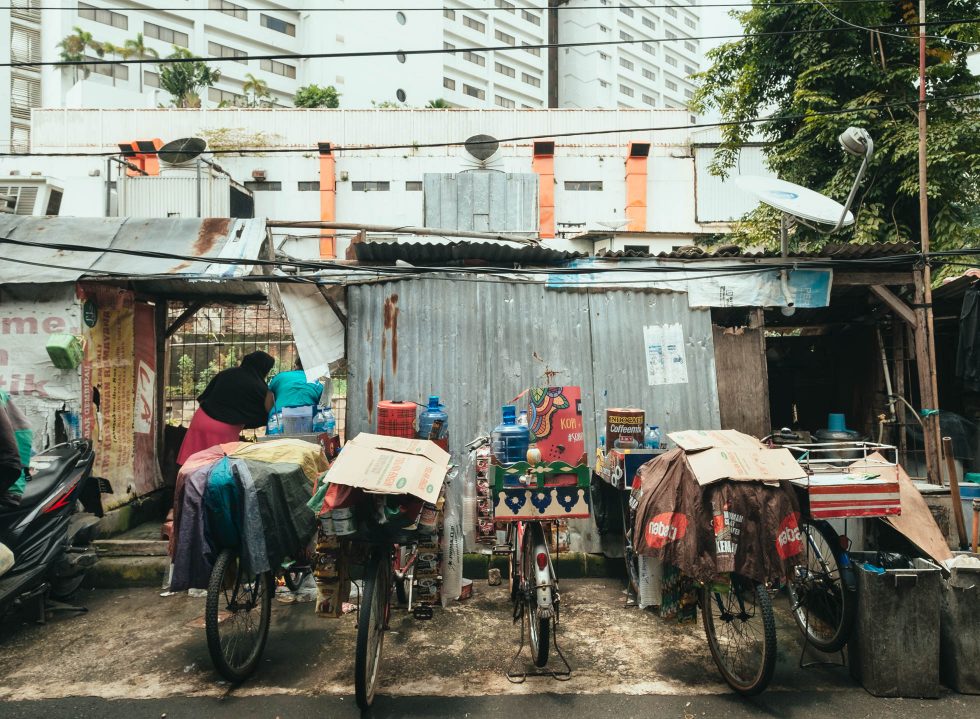 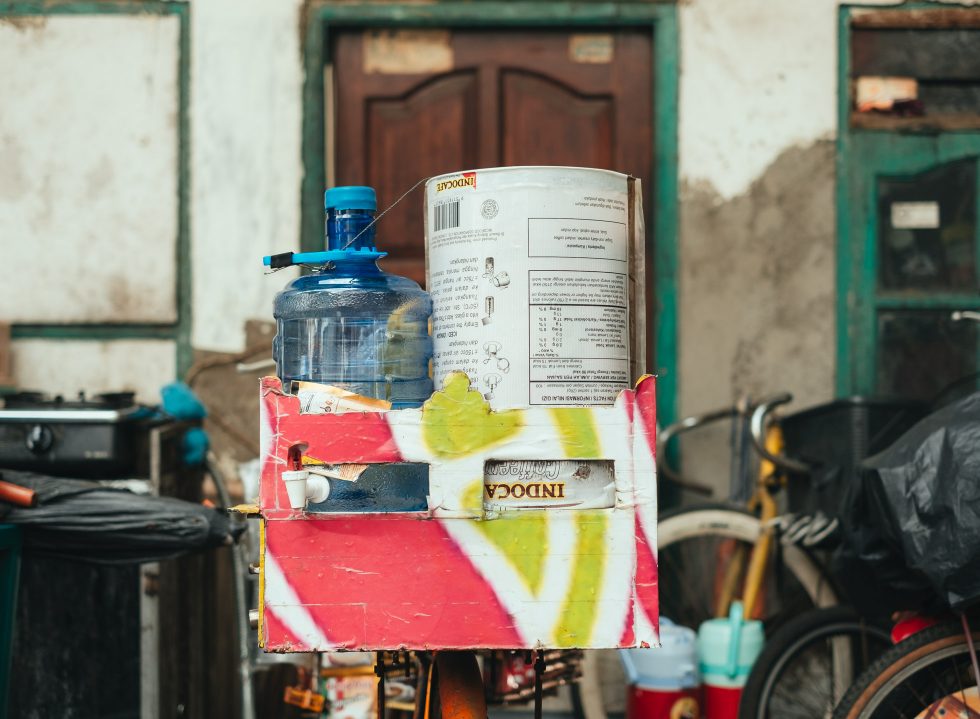 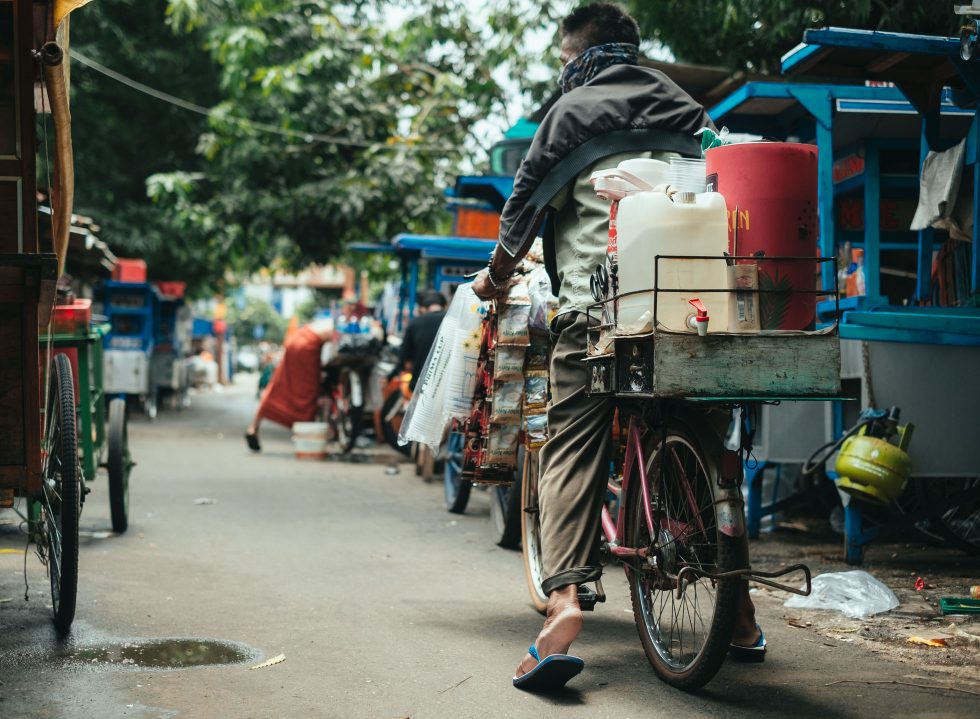 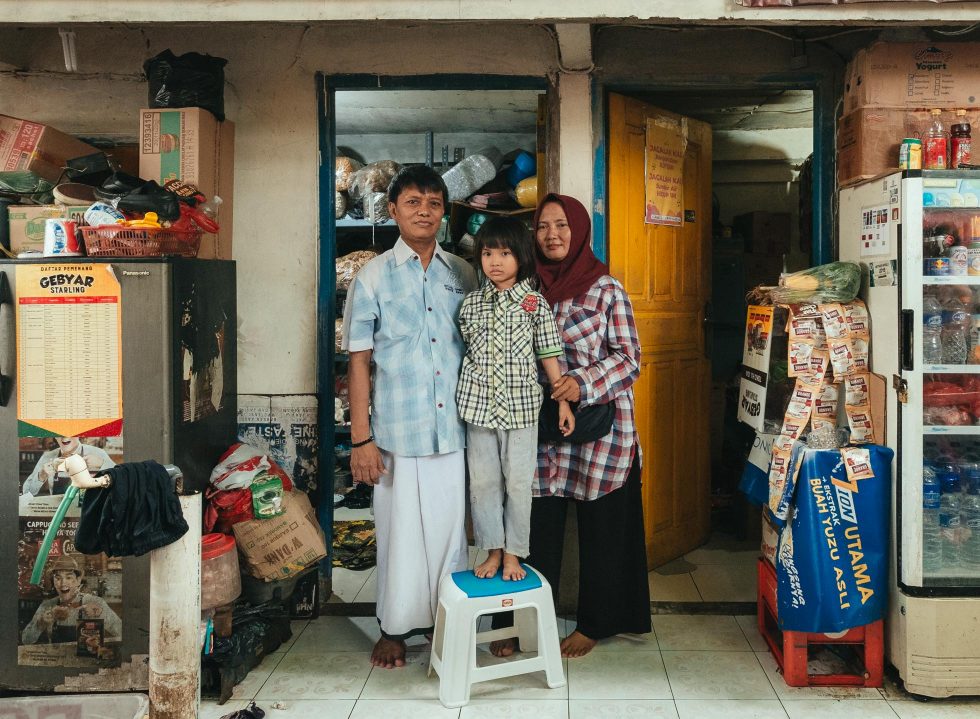 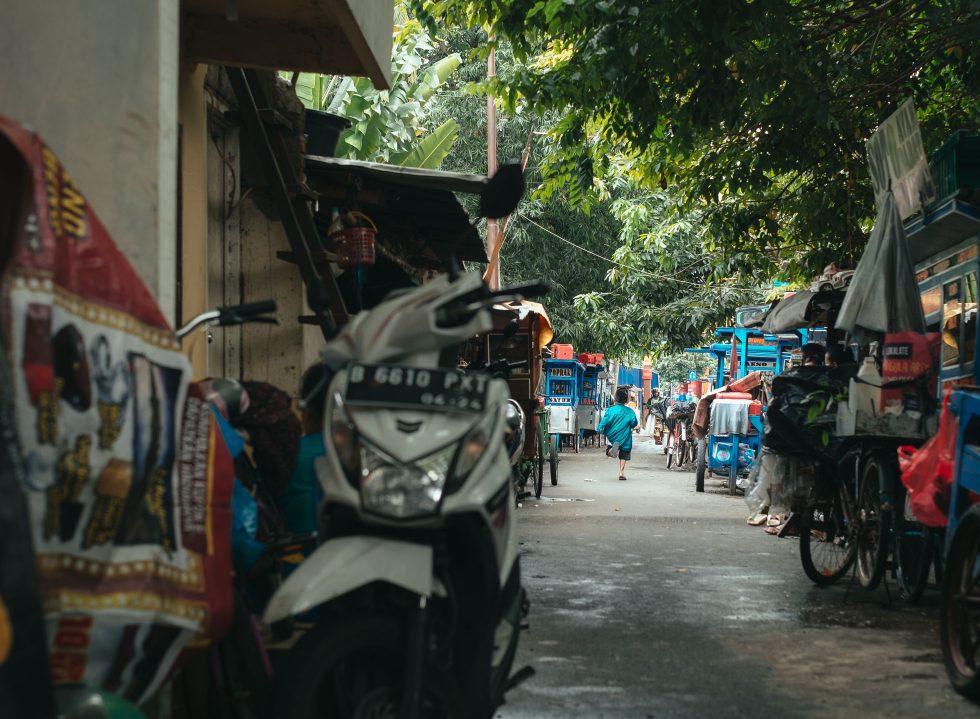 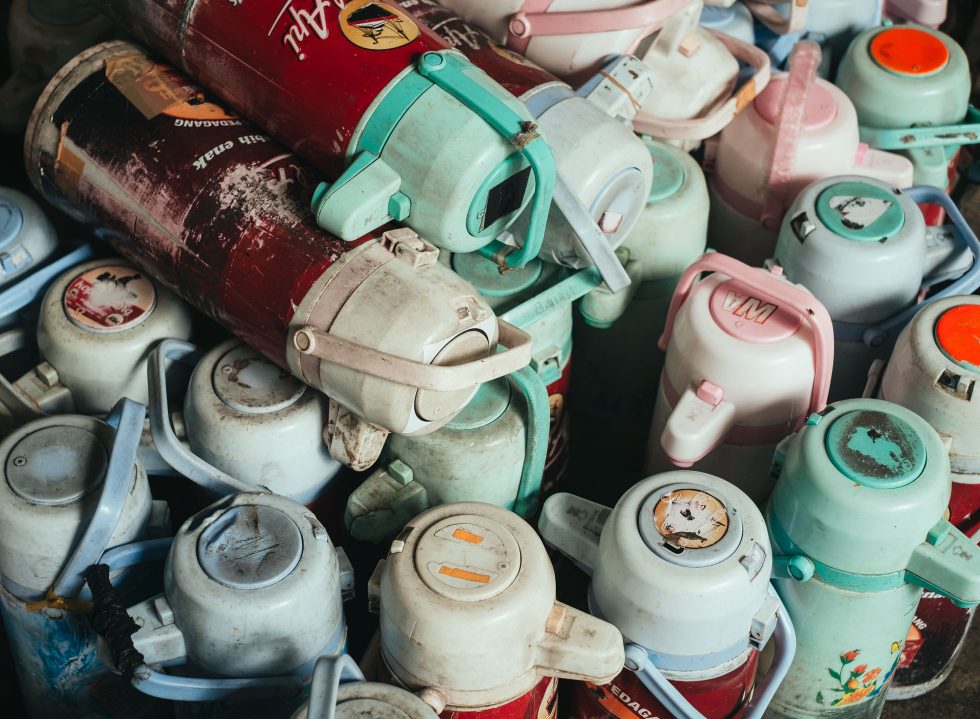 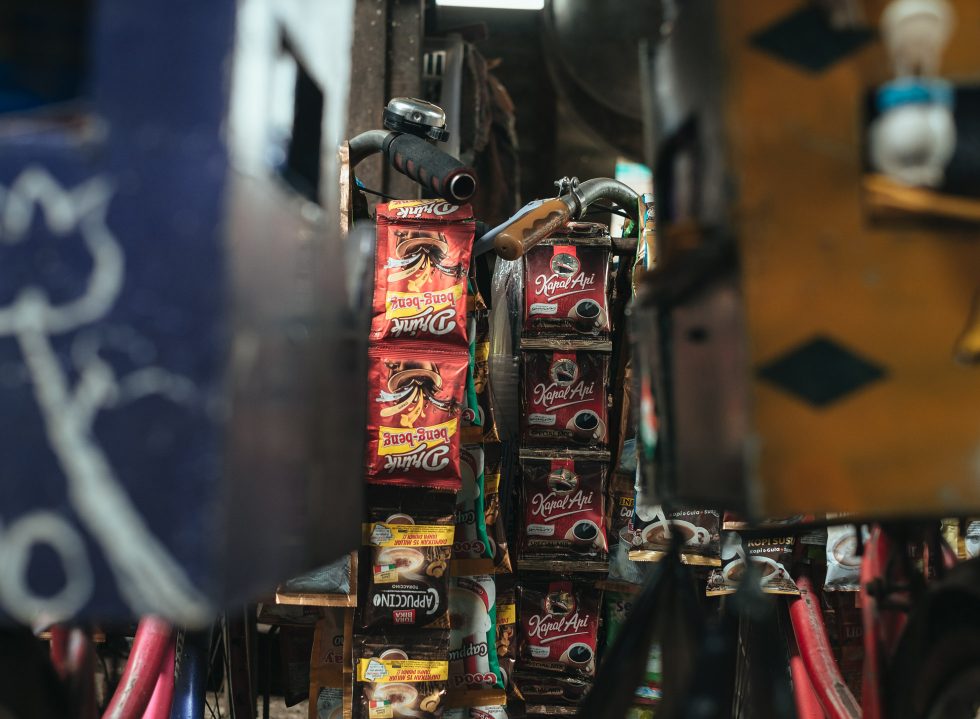 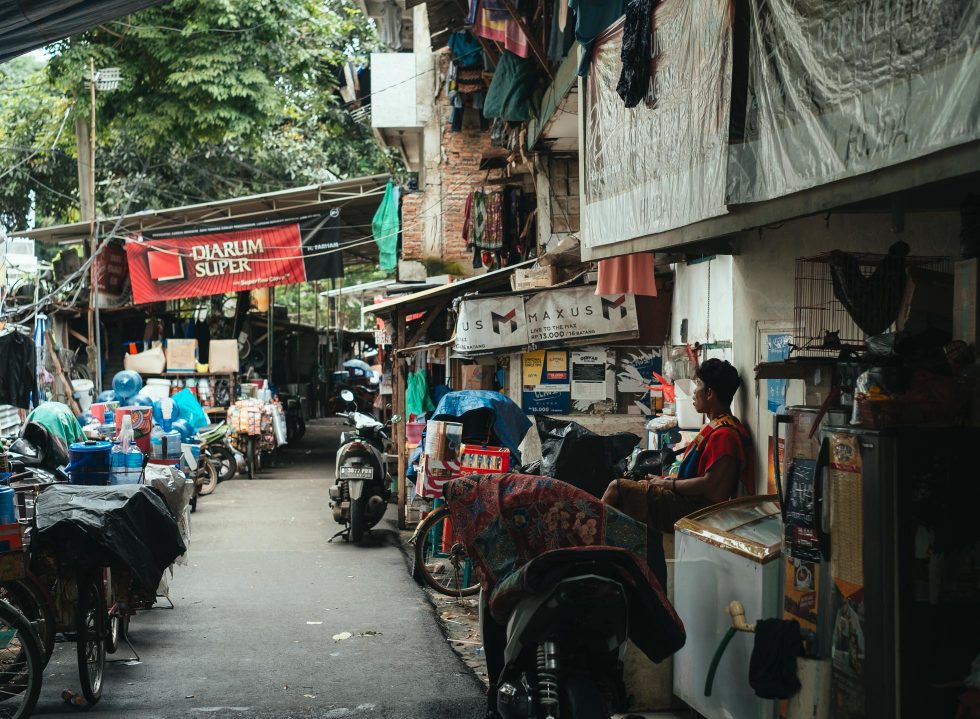 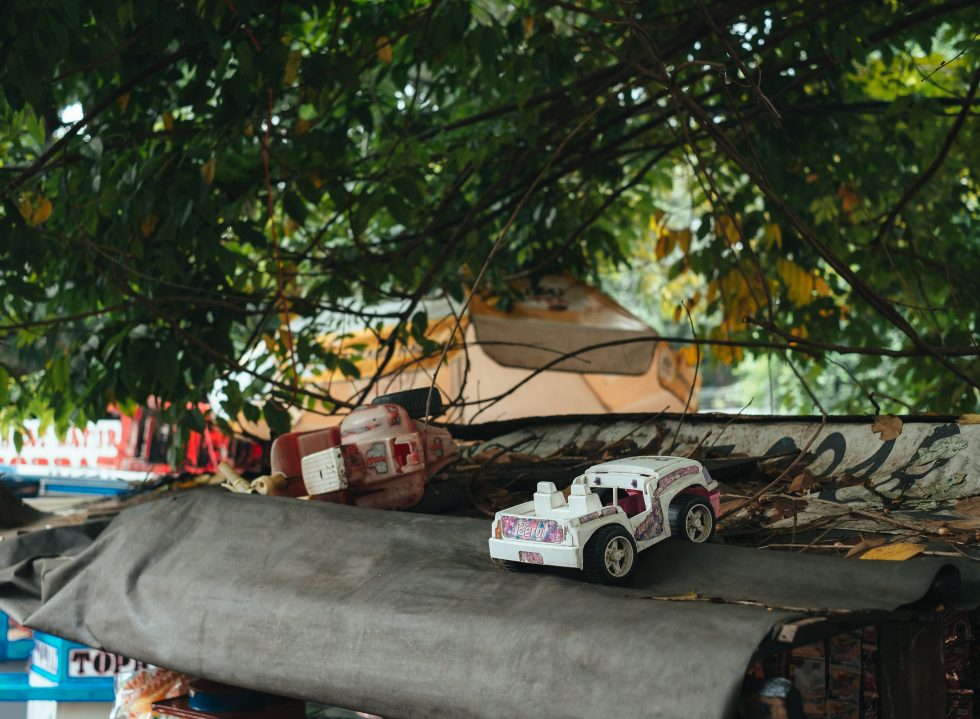 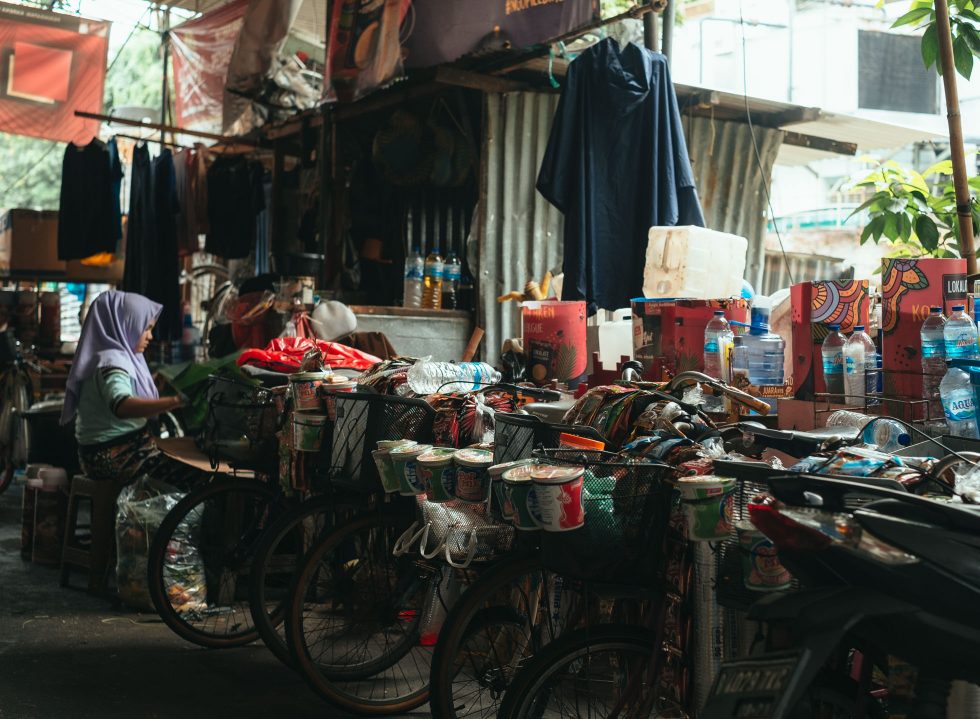 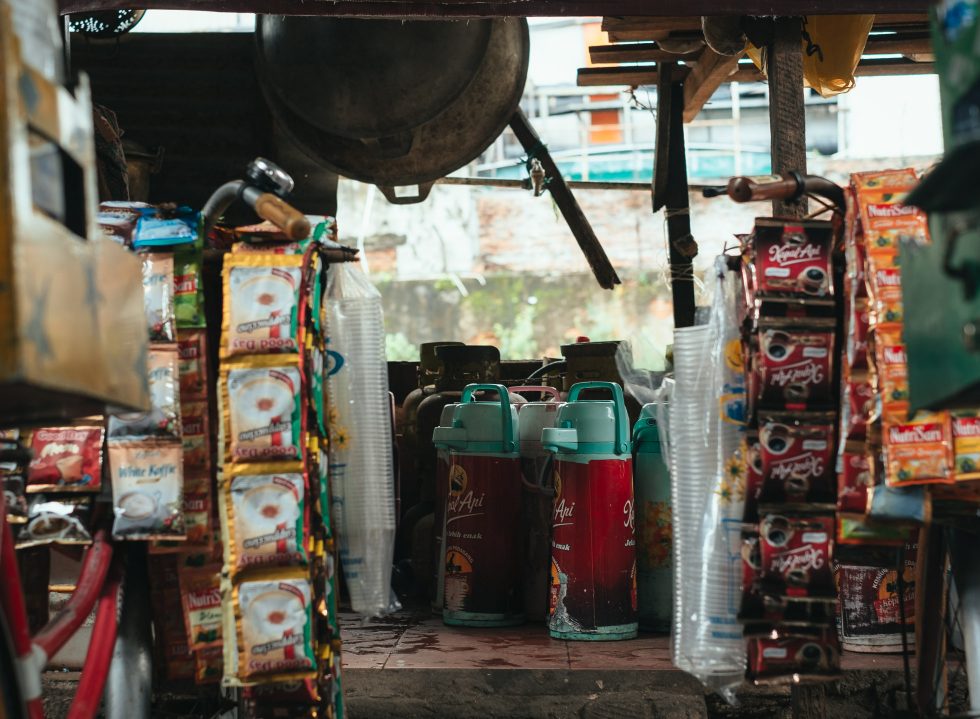 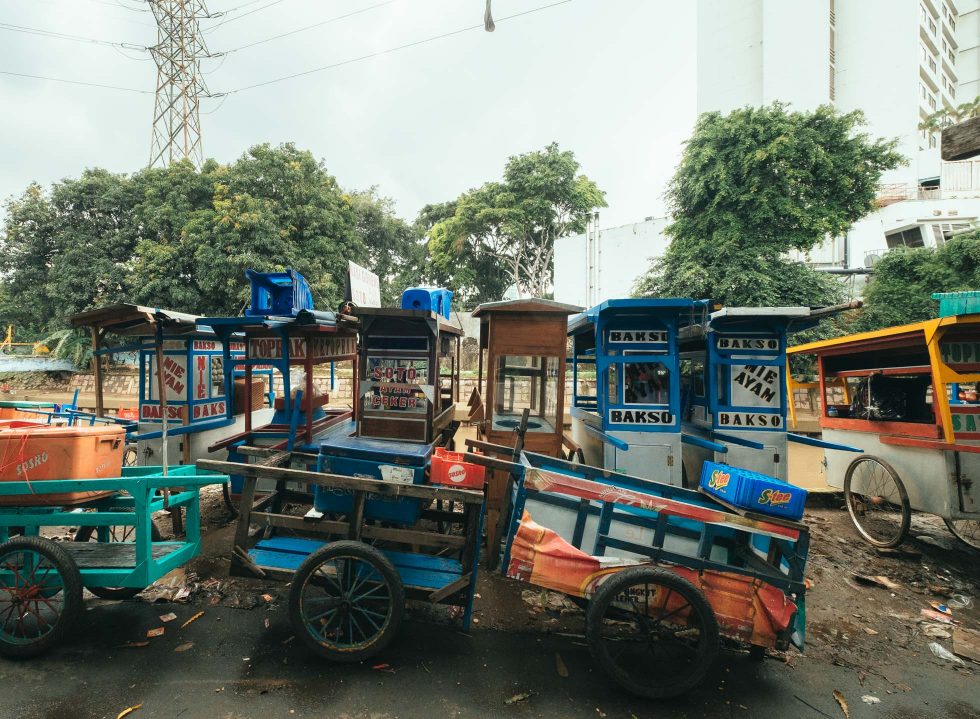 Into the Starling Business

By Hana Oktavia A.
Share
In a city where megacorps, ride-hailing delivery services and café business proliferate, bottom-tier trades like Starbucks Keliling (Jakarta’s roving ‘Starbucks’) continue to run their operation under one’s radar, on their own terms. In this feature, we dive deep into the roots of starling, its undisclosed monopoly to how mass demonstrations contribute to their business.

On a warm morning in Jalan Prapatan, rows of empty pushcarts give way to Kampung Starling, home of many starling (colloquial for Starbucks Keliling) traders. Since the nineties, starling fleets have been roving around the city to sell day-to-day goods for the blue-collar workers: from packs of cup noodles, migraine reliefs, tobacco products to naturally, cheap instant coffees for a quick daybreak fix.

At midday, these traders would prepare for their daily errands which would last until dawn. Then, they would go back to their modest homes and repeat the drill to make their ends meet. To outsiders, the business may look simple and direct, but for generations, starling has been running its own trading system. Just like any other business, the operation can also be territorial, and at times, highly profitable. With the pioneers of starling and their traders, we date back to the early days of the business, how politics shaped and affected their trade to how they would earn thrice the country’s regional minimum wage during mass protests.

In 1985, Abdul Rosyid (56) who is Maduranese, migrated to Jakarta to find a better life. Five years later, he brought his wife Surida (54) with him and they settled down in Kampung Starling. Today, their house shares space with a stockroom and a little wholesale shop that emulates Surida’s name, “Toko Hj. Ida.”

Together, the pair goes about their bygone days of trading drinks and cigarettes around Monas (National Monument) with their pushcarts. “Monas isn’t like how it used to be. In my ‘time’, there were many discotheques and a popular theatre (now Djakarta XXI). It was a thriving scene,” Surida recalls her memories of Monas circa 1990.

Abdul, who is sitting casually in his sarong and a blue plaid shirt, remembers in great detail how he pioneered starling on bikes, or starbikes. “During Soeprapto’s (Jakarta Governor in 1982-1987) era, street vendors were still allowed to sell around Monas using our pushcarts (gerobak). It was in 1985 and the monument was yet to be fenced.”

It was only until Megawati Soekarnoputri served as the president in 2001 to 2004 that street vendors were no longer allowed to sell near the national monument. From then on, the couple had to stop trading in front of their favourite trading spot: Earthquake, a popular nightclub in the 80s.

“I went back to Madura not long after the new policy took effect and told my father about [the prohibition]. He asked, ‘Wouldn’t it be easier if you go by bike?’ The thought never occurred to me before.” Following his father’s advice, he customised his bike and continued his trade on a two-wheels, which became the onset of starling or starbikes (as we know it) as a phenomenon with many street vendors imitating the novel idea. “In a heartbeat, we suddenly have about 25 underlings, most of them are Maduranese,” says Surida.

Of kin, connections and territory

Side by side with a river, the inners of Kampung Starling in Jalan Prapatan is, so to speak, disorderly: coffee-jammed bikes and pushcarts are parked in front of modest tenement houses, and a mosque nestled by the end of the alley. Early in the morning, the traders are still asleep so the neighbourhood couldn’t be more silent, but when the azaan to Friday prayers called aloud, each headed out unhurriedly.

Though starling isn’t identified with a certain ethic group, there is history to unravel with Maduranese. In the 1980s, the site that is Kampung Starling today became the settling ground of Maduranese people when they migrated to Jakarta, as in the case of Abdul. The majority became starlings, (trading on pushcarts), as a living. The high number of Maduranese migrants settling in Kampung Starling even pushed away local thugs out of the neighbourhood, according to Abdul.

Here, the inhabitants share two public bathrooms located outside their homes. One bathroom is set near the open-air kitchen and the other just by the mosque. Now, the village is home to about a dozen of Maduranese starling traders along with their families.

“Most of us in Kampung Starling in Jalan Prapatan are Maduranese. But we also have a couple of Javanese families,” Surida explains. As leaders of the pack with her husband, the duo is not only in charge of their fleet’s daily operation, but is in charge of the supplies as well. By end of day, their traders ought to hand them a commission to compensate for their given supplies.

The fact that Kampung Starling bears its own system might come off as unexpected, but monopoly in businesses isn’t uncommon. In Jakarta, starling traders come home to different dwellings, and though the one in Jalan Prapatan may be the oldest ‘headquarter’, others are found in Tanah Abang and Senayan, each latching on to different leaders.

As expected, Abdul and Surida are in charge of the Kampung Starling in Jalan Prapatan. The matriarch, who is also a retired trader, now owns the wholesale shop that supplies products to her underlings. “The traders buy their own bikes and I supply the products. Occasionally, I stop by Jatinegara or Senen market to buy the goods, like coffee and snacks.” Surida acknowledges how she enjoys her weekly errands to the market by bajaj. Her husband, on the other hand, is responsible for the general operation of his wholesale-slash-stockroom and managing his troop of traders.

However, no matter how determined Abdul is when it comes to supervising his operation, the longstanding cat and mouse game between the starling riders and municipal police remains a daily issue. “Roving around the main roads is very tricky, especially in Thamrin area,” he expresses. To date, the traders have to be very cautious when hanging around Thamrin or Senayan to avoid being caught by the authorities. “On bad days, [policemen] would confiscate the trader’s bikes for three days to three months. Bailing out our traders is part of our responsibilities,” Surida reveals. “But when the officers are in good mood, they would just ask for IDs or take away the thermos!” her husband added.

Though trivial, their thermos phenomenon also strikes as a riddle. Each starling is provided with two filled thermoses for a day’s trip with five stops. Abdul’s traders handle areas like Bundaran HI, Menteng, Kebon Sirih, Sabang and Sarinah. With their day-to-night shifts, they ought to refill their water at pit stops, usually a warmindo (short for Warung Indomie), but not just any: it turns out, even the pit stops are carefully selected by the leaders. Specific ones have been assigned where the traders can refill water at a much friendlier price. After all, it takes connections for a business to survive.

“We traders always have mixed feelings about demonstrations. On one hand, demonstrations are dangerous. However, we earn a lot of money from mass public events,” Surida expresses.

Last year, a two-day post-presidential election protest descended to Bundaran HI, a centre that has become a commonplace for civic demonstrations and a popular pit stop area for the traders. The protests coincided with the month of Ramadan, albeit protesters persevered with the demonstration while fasting. But once the sun set, many approached starlings for the well-awaited break fast with coffee and cigarettes.

On day one, hungry demonstrators brought in eight million rupiah to Surida’s pockets who traded during the demonstration. She and many other starlings had only begun trading at around 5 in the afternoon. Their business profit shot up multiple times with events of big masses. Meanwhile, on a regular day, one starling trader would earn IDR 350,000.- on average.

“On the second day of the protests, I came home with ten millions rupiah. The second protest was more brutal and involved more demonstrators, I saw young people getting beaten by the police. It was so crowded, but before it got out of control, many customers came to us to buy drinks and cigarettes.”

The violence that broke by the end of the demonstrations left six people dead, many harmed and arrested, but, according to Surida, her and the rest of the starling traders managed to come home safely with stacks of small change that amounted to substantial rupiahs.

The ban of street vendors when Megawati held office to the 2019 protests, are examples of how politics affect the business of starling in Jakarta.

Surida’s business does not stop at managing their starling fleet and convenience shop. Now, Surida also takes care of her female traders who sell coffee Madura-style: on a bucket balanced on their heads (in Bahasa: Pedagang Keranjang). A proud Maduranese, she spoke of how women in her hometown used to practice this tradition as little girls. “There, young girls carry a bucket of water on their heads. It’s never easy at first, but after a while we can do it easily,” she says almost excitedly.

Though the sight of these powerful women seems rare in Jakarta, Surida says that most of them reside in Kampung Starling in Tanah Abang and trade around the area where they live.

Whether inherited or by choice, many starling traders embrace this walk of life. Around Taman Menteng, one would come across a flock of starling riders ready to concoct instant coffee not far from their bikes in the afternoon. Just behind Grand Indonesia mall, starling bikes line up near young locals getting ready to parade the striking Ondel-Ondel. But, the most interesting sight must go to Sarinah, as groups of starling traders can be spotted just next to the ever-growing global chain, Starbucks, itself, and this lower-tier trade isn’t slowing down anywhere.

Humbling and nearly overlooked, the presence of starling reminds us that nothing in this city comes out of nowhere. Behind what seems to be a simple trade, lies stories of various communities in their quest to make it in the big city even when the odds are against them, further reflecting the innate perseverance of those we often fail to see.