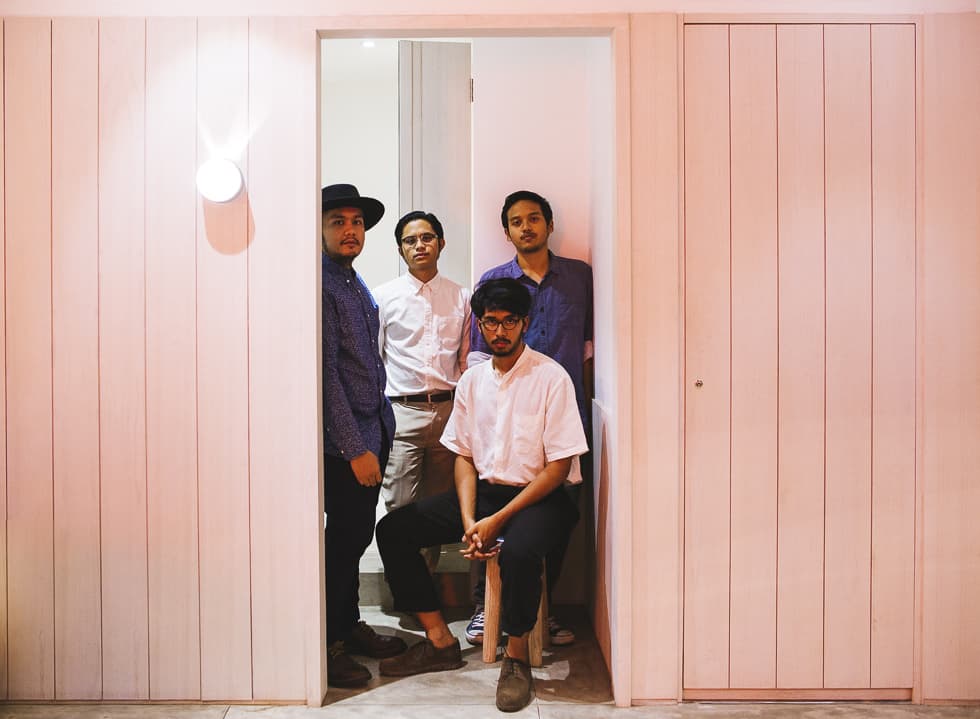 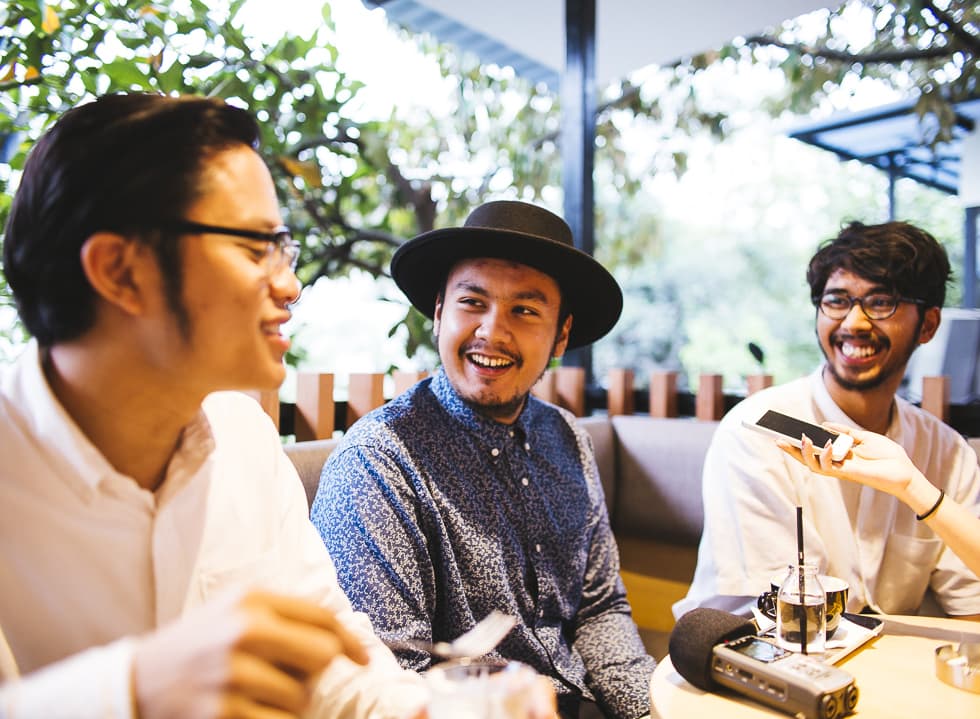 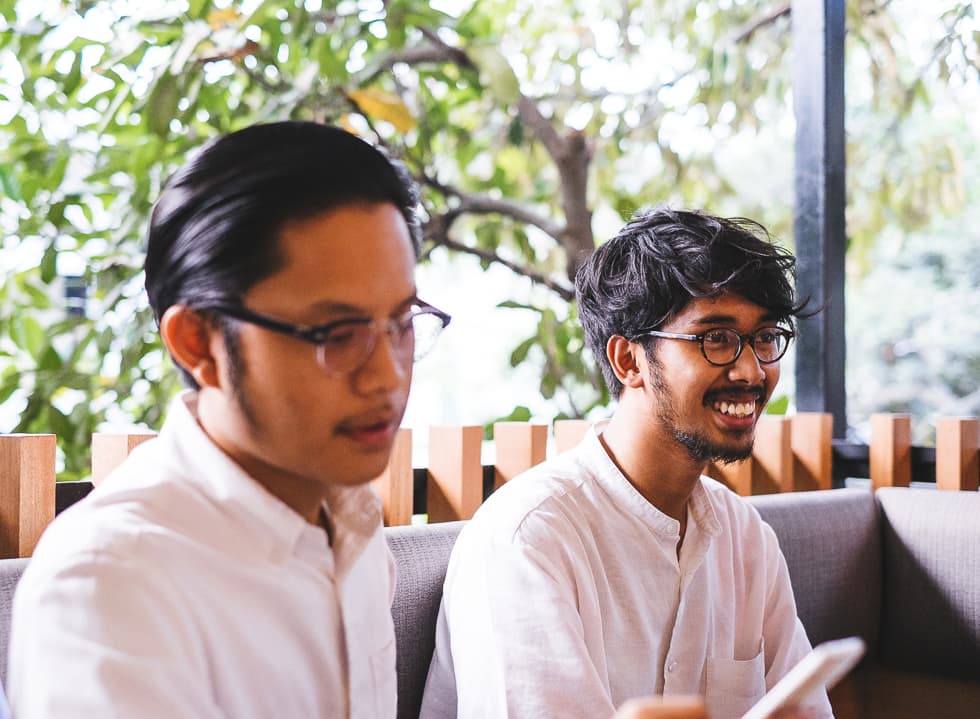 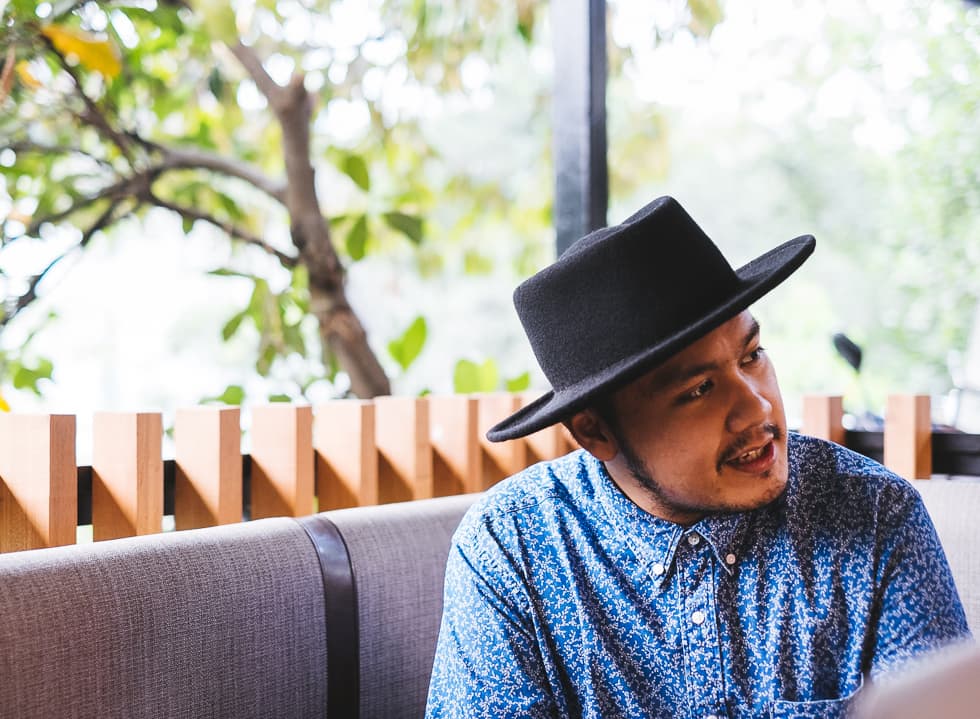 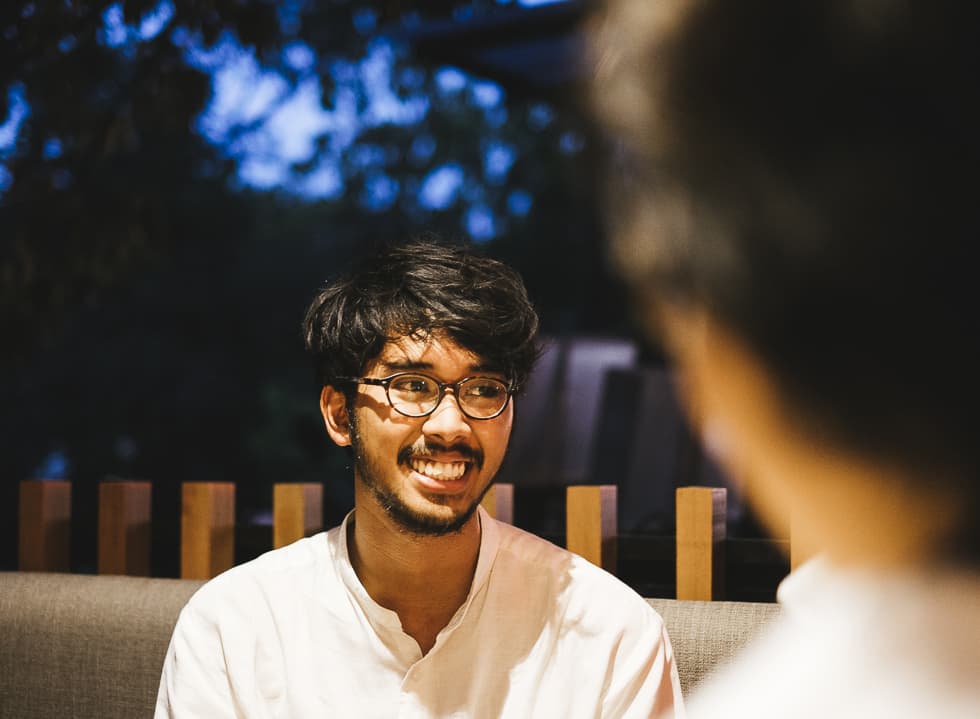 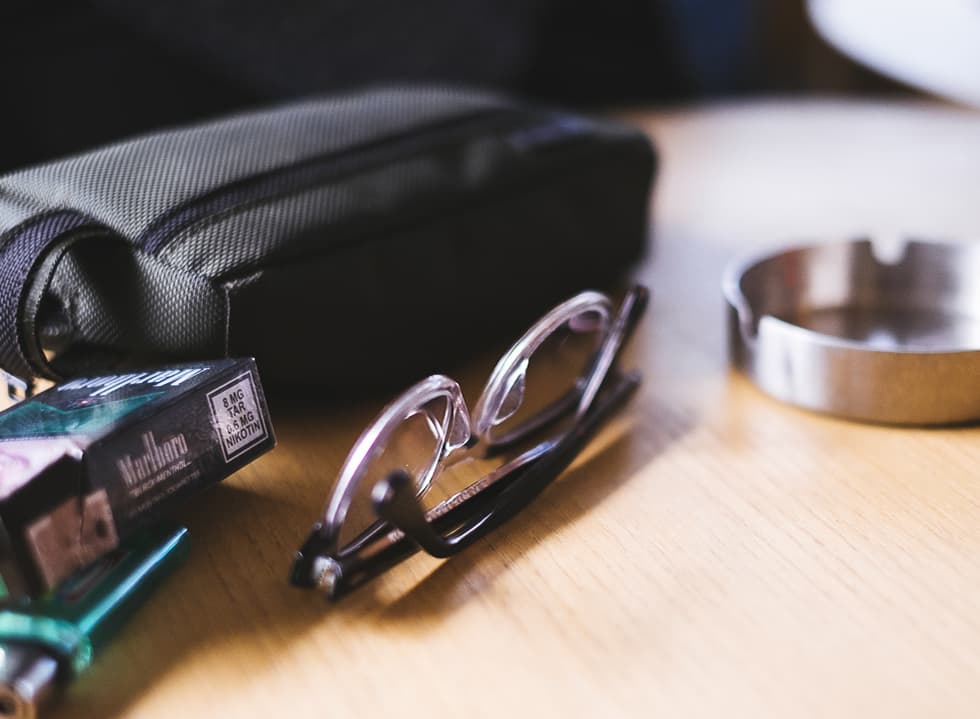 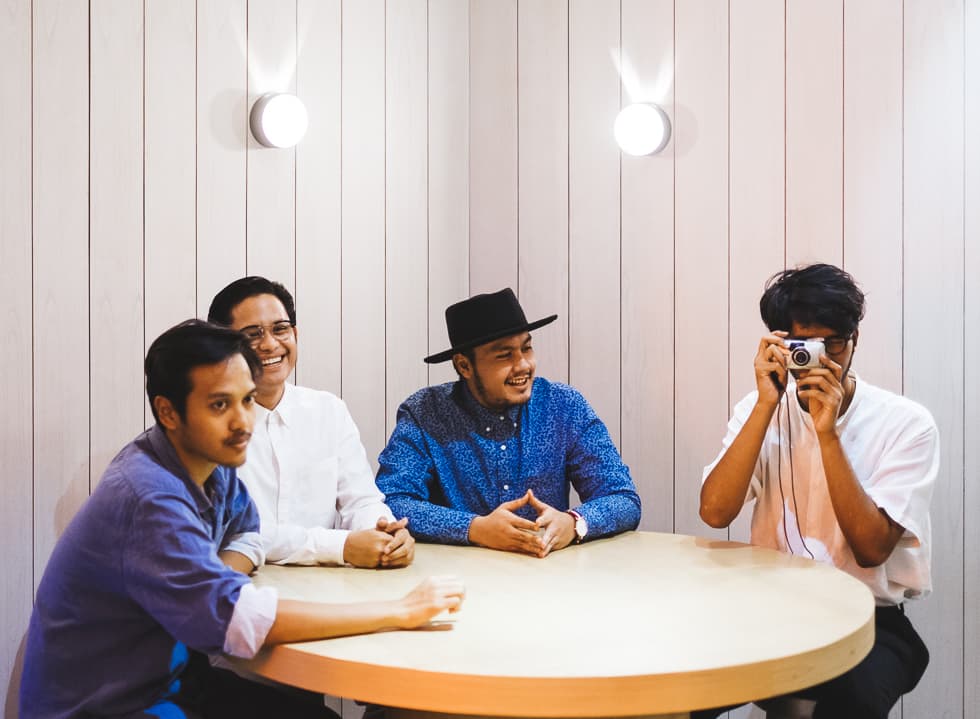 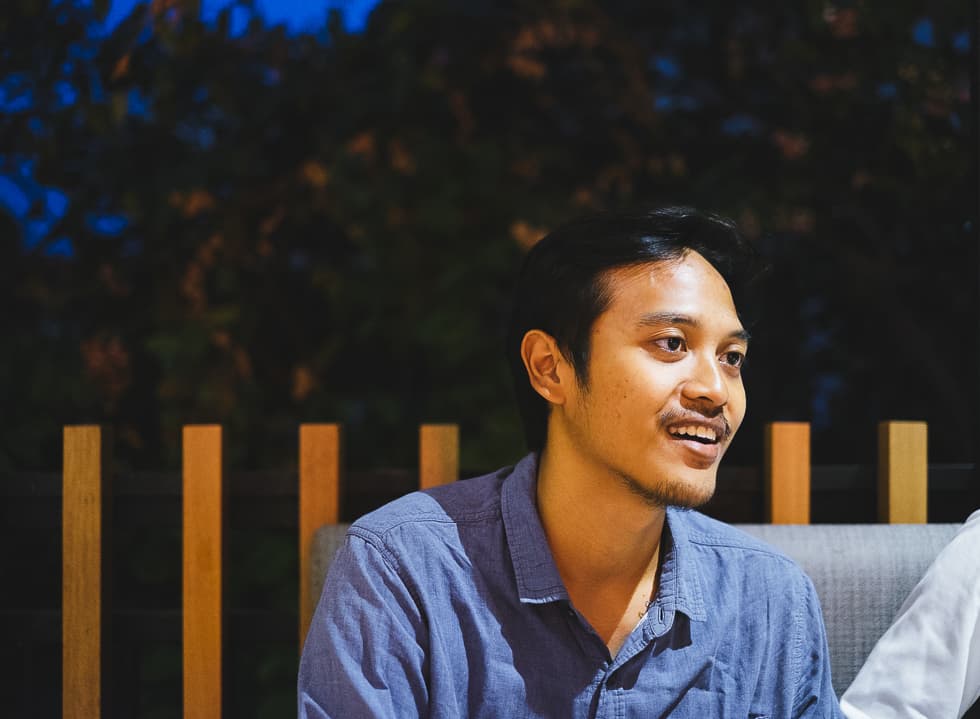 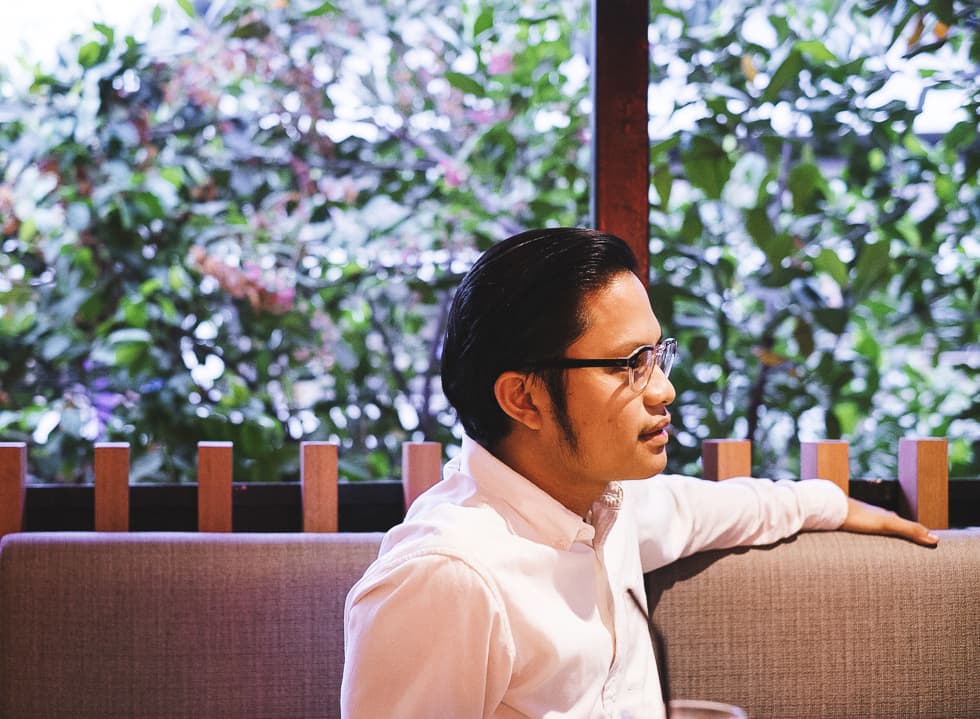 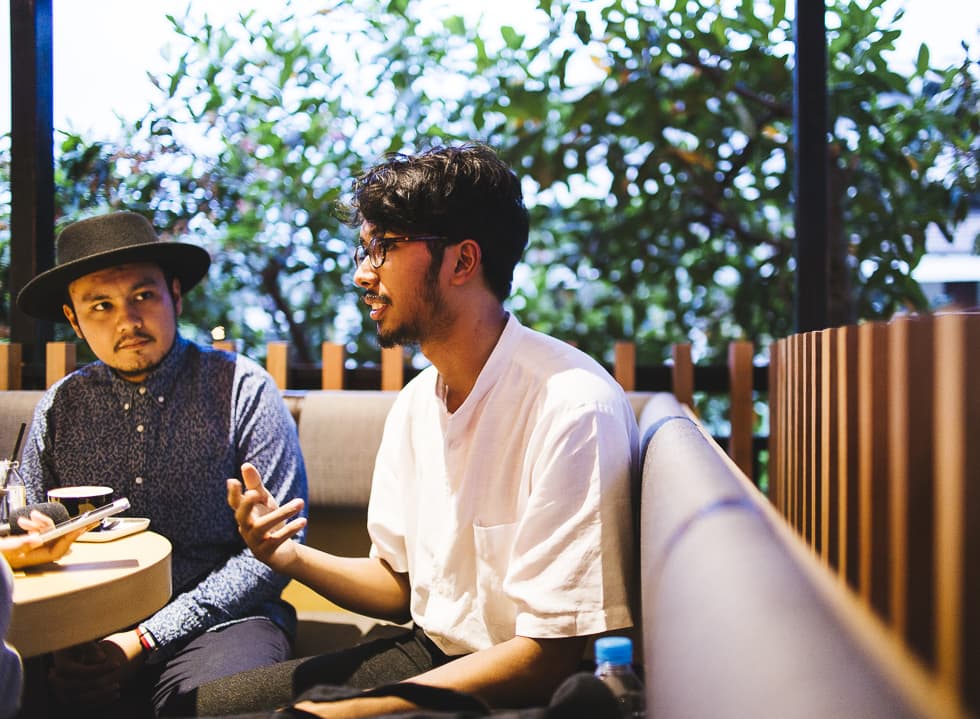 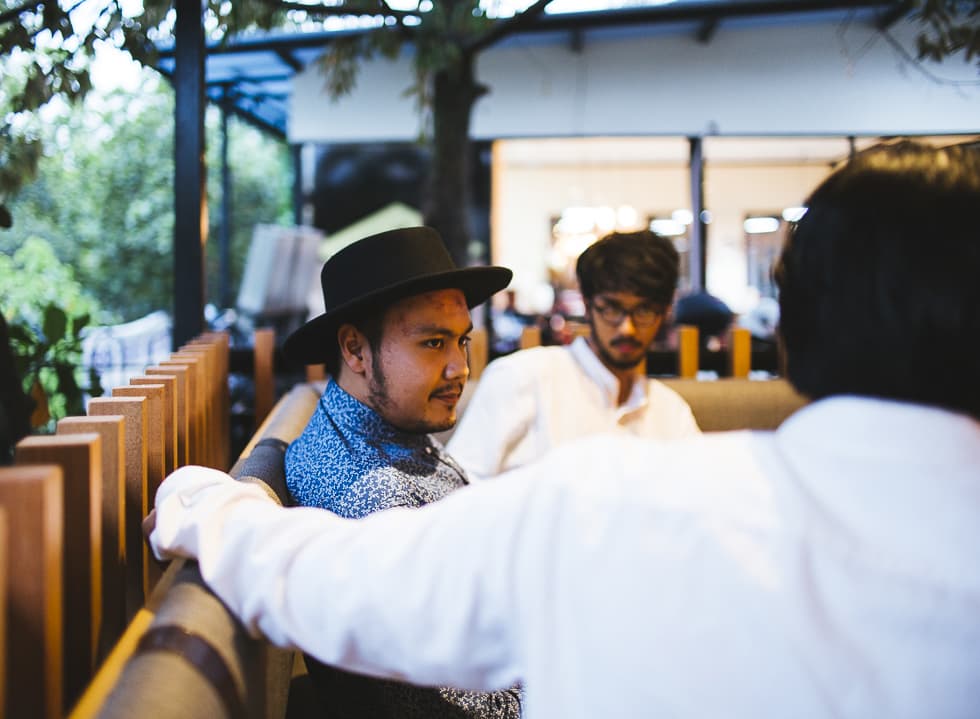 by Raina Salim
Share
As a preview to the RRREC Fest, we introduce you to the up-and-coming local band, Polka Wars. We talked to the four-piece band on making music and the creative process behind their debut album, Axis Mundi.

With their debut album Axis Mundi out and multiple upcoming concerts lining up, including the long-awaited RREC Fest in The Valley, it’s definitely shaping up to be an exciting year for Polka Wars.

The band comprised of four members – Karaeng Adjie, Billy Saleh, Xandega Tahajuansya, and Giovanni Rahmadeva – and is well known for their experimental approach to music. Take Axis Mundi for instance; some songs have indie rock feel, while some others lean towards alternative. Although it seems they’re being unattached to one genre, it is in fact the drawing card of Polka Wars. The group has been carving their way into the local music scene with their distinctive and compelling tracks.

With a mere 8 days to go until RREC Fest, we got the chance to chat with the band where we unveiled stories from their early days and what to expect from their performance in the highly anticipated RREC Fest in The Valley 2015.

How did you guys meet? Tell us more about how Polka Wars first started.

Karaeng (Aeng): It all started like how all bands started, I guess. We went to the same school, and since none of us were particularly athletic, we figured that the easiest way to get girls would be to strum away with our guitars and be in a band. (Laughs)

Billy: Each of us used to be in different bands, all with a distinctive metal hardcore undertone, but none lasted very long. Upon entering university, we all wanted to get back to playing music, so we started jamming together and found that we play well together. So we continued on from there.

Why do you call yourselves Polka Wars?

Aeng: As Dega (Xandega Tahajuansya) likes to say, it’s a conversation stimulator. Upon hearing the name, we want people to naturally start questioning what we are and what kind of music we represent.

Dega: Ideally, the sole purpose of a name is to represent a whole being. As for Polka Wars, we settled on the said name to hook the listeners and garner their attention, while the band’s ultimate focus still lies in the music and lyrics.

Billy: Quoting Deva (Giovanni Rahmadeva), it could very well be that we didn’t choose the name, but rather, the name chose us. We originally first started as Polka Walks, but along the way decided that Polka Wars suits us better. And it is a lot nicer to say, isn’t it?

We notice that there is no specific genre when it comes to your music, what do you think defines the sound of Polka Wars?

Aeng: Music is not meant to be categorised into boxes. If it’s good, then its good, no matter what genre it is.

Billy: Some people regard our music as pop, some alternative, and some indie rock. But in the end, it’s free to interpretation for our listeners.

Dega: There’s no specific sound in particular, I think we’re trying to establish our own sound. Every music is its own being, and we hope that Polka Wars’ sound is unique in itself and is able to stand on its own.

Could you elaborate on your creative process? Do you guys usually start with lyrics, beats, melody, or?

Aeng: Ideally the creation of a song should start from lyrics, as a song’s soul lies in the lyrics. If a song were a drama, the lyrics would be the script, while everything that comes after can easily be regarded as additional props. But realistically, it is a lot harder to find great tunes than great lyrics. So usually we’ll start by playing the music and from there we’ll come up with suitable wordings and feelings, which we pour into our lyrics.

Billy: “Lyrics possess a higher level of flexibility compared to tones”, quoting Cholil Mahmud, vocalist of the band Efek Rumah Kaca. With lyrics you can alter words and pronunciations, whereas the likelihood of changing, or finding an adequate replacement for tones is evidently harder.

Yes, but sometimes finding the right lyrics to go with the said tunes needs a lot of effort as well. Who is in charge of writing lyrics?

Aeng: It varies. Deva and I are mostly in charge of the lyrics, but sometimes Dega helps us, as he has an aptitude for song writing and creating a narrative out of mere words. We all share a mutual understanding on which direction we want the song to go to. Sometimes we are also joined by Ade Paloh of the band Sore.

As musicians, of course there are famous musicians that have influenced your musicality. What did you guys grow up listening to, and in what ways has it shaped your sound as a band?

Dega: We all went through every teenager’s rite of musical passage. From listening to Linkin Park in middle school, metal and emo in high school, to college days where we started listening to our own thing. Billy likes Brazilian songs, Aeng is still staying true to his emo roots, Deva listens to soul and R&B, while I have taken a liking to folk music.

I think all of our personalities and music taste is somehow mixed together in our songs, thus why I believe all our records naturally contain elements of our identity as a band.

Aeng: I believe there is no such thing as new music, or even art. And we’re kind of in the thin line in between. Not necessarily an original, but not a copy, thus making our sound unique in itself.

We know that Aeng sings most of the songs, but in Lovers and Alfonso, Deva who’s usually on drum is the one behind the mic, is this something you guys do consciously?

Billy: Yes, Aeng and Deva are the lead vocals in this first album. But we don’t necessarily create songs with their voice in mind, specifically. It all depends on the flow of the song. As for this first album, we agreed that the songs are a better fit for their voice characters. But this doesn’t close the possibility of things changing in our future albums.

We must admit that we really love what you guys do for Axis Mundi’s album cover. In what ways are you guys involved in the artistic process of the album making?

Dega: During the recording process, we came up with the title Axis Mundi and we all agreed on red and blue being the dominant colours of this album. We wanted the album cover to be a photograph, not illustration, and we eventually worked with artist Kendra Ahimsa. You can see from his work that he doesn’t normally use photography as a medium for his art, but he’s agreed to help us and the result was amazing. We also worked with a photographer, Jatidiri Ono, who helped us achieve the outcome we hoped for. Kendra has skillfully managed to interpret the content, title, and philosophy behind the album into one cover art that syncs well with the band’s identity.

Billy: Yeah, he’s definitely got a knack for visualising audio into art.

Aeng: We helped conceptualise but the immaculate execution all goes back to the work of these two talented guys.

Concept wise, what are you guys trying to capture in this first album?

Aeng: Contemplation. Although it doesn’t reflect on any religion in particular, it is a glorification of God in a universal way. The songs have a tendency to lean towards issues of anxiety and restlessness, and drawing connection with the idea of the existence of a higher being. But, back to interpretation, it’s completely up to the listeners what to make of our songs and lyrics.

Billy: I think the restlessness of our youth is a leading issue in this album. This, in addition to our search for self-identity is a theme we unconsciously fall back to.

Billy: We learned so much throughout the trip. It was enlightening. Especially on work ethics, people there work very efficiently within such a limited time frame.

Dega: Overall, it was such an eye-opening musical trip – although we didn’t plan it that way, we ended up spending a lot of time with musicians.  We stayed in Airbnb and our host was a house music producer, although a rather sketchy one at that. We got the chance to hang out with upcoming producers, Andy White of Mac Demarco, Cassie Ramone of Vivian Girls, and folk singer Jessica Pratt, in addition to the incredibly pleasing characters of Rubber Track.

Just to be in conversation with both local and international musicians and having the opportunity to voice over opinions and exchange thoughts was definitely one of the highlights for me.

Can you tell me what you guys do when you guys are not making music?

Aeng: (Laughs). I own an oil and gas business so I spend most of my time in the office.

Dega: I work in property, and right now I’m also busy with STUDIORAMA, a music community that advances local bands and international bands to a greater crowd.

Billy: I’m still hunting for jobs, so hopefully I’ll find one soon. I used to be a banker but had to make the decision to quit my job in order to go to New York (for Converse Rubber Track).

Deva: I just recently got married, and I have a few side businesses on the works right now. I’m also exploring other forms of art, in my case, film.

You guys will be performing in RRREC Fest, how’s the preparation coming along?

Dega: After our previous concert, I think we’ve overcome a milestone and found a new groove in our performances. I guess we’re still so fired up, so I’m just really excited for better performances in the future, starting from RRREC Fest.

Aeng: Too much of a good thing is a bad thing, so we’re taking it easy.

Dega: Yeah, RRREC Fest is really different in comparison to other music festivals. It’s a lot more casual, where musicians and fans can really mingle together and inhabit the same area.

You guys performed for a large crowd before. So that means RRREC Fest should be a breeze right?

A big thanks to Woodpecker (Terogong). Polka Wars will perform in RRREC Fest In The Valley 2015 that’s going to run from 25-27 September 2015 in Tanakita Camping Ground, Mount Gede Pangrango, Sukabumi. For information on schedule and ticketing click here. 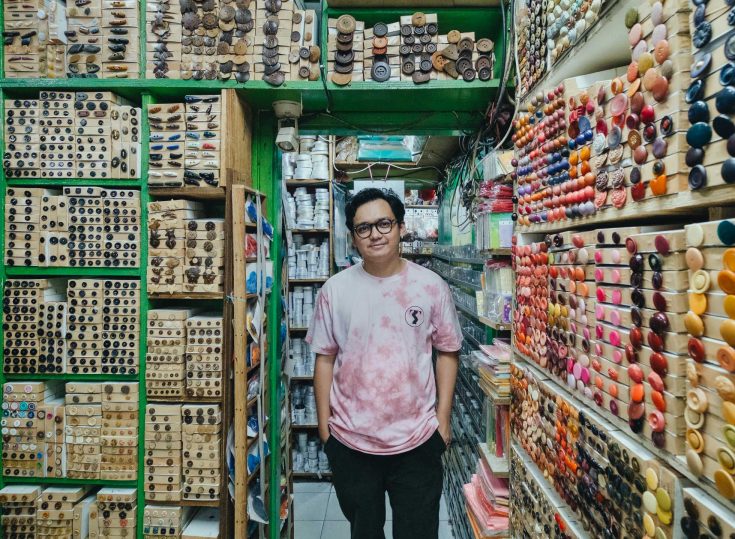 Photographer Prayogo Yoedo Prawiro talks about his journey in finding still life photography, his love for consumer goods and his obsessions with the animated sitcom Rick and Morty. 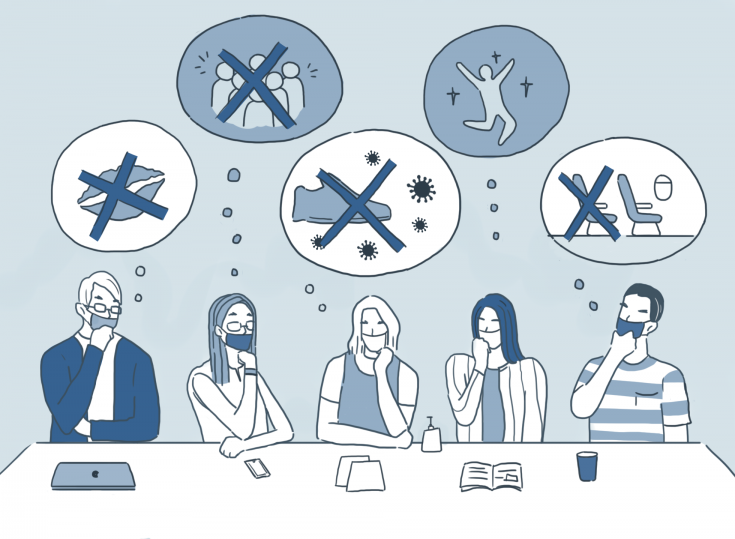 Opinion: On Our Post-Pandemic Selves

How has the pandemic altered our habits and perspectives? As we've hit the "anniversary" of the globe-trotting virus, editors of Manual Jakarta had few to say in this op-ed instalment. 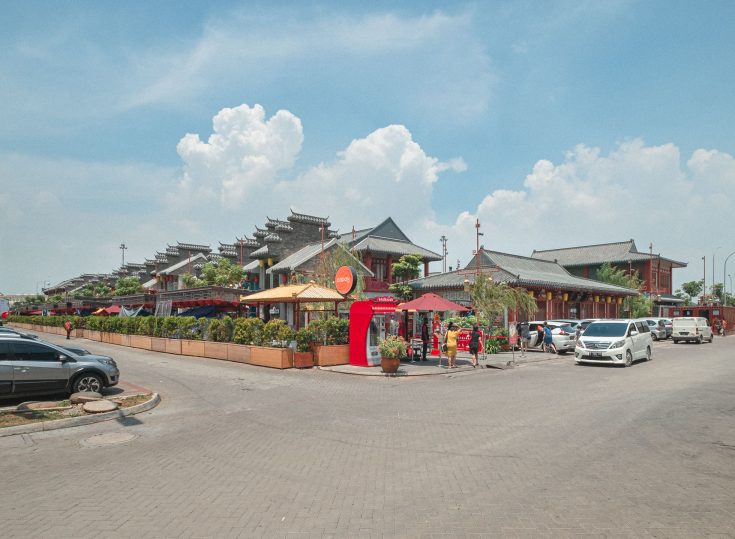 Inspired by the lively hubbub of Glodok’s Chinatown, Pantjoran sets ground in PIK as a culinary destination teeming with classic eateries and local energy of the Chinese Indonesian community to be enjoyed by all.