The One and Only Edwin - Manual Jakarta 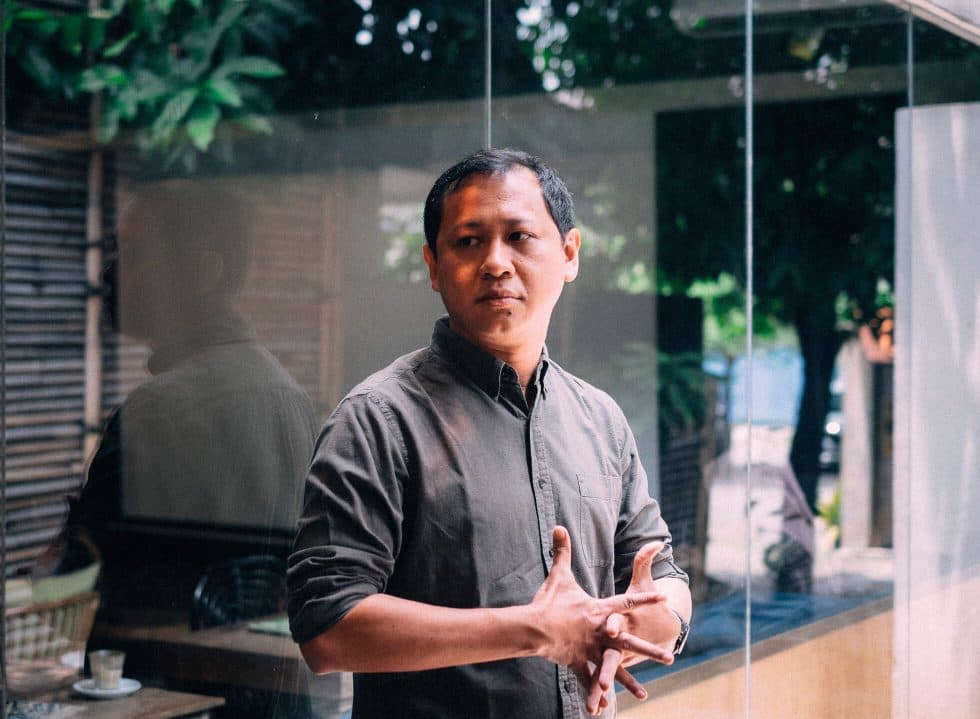 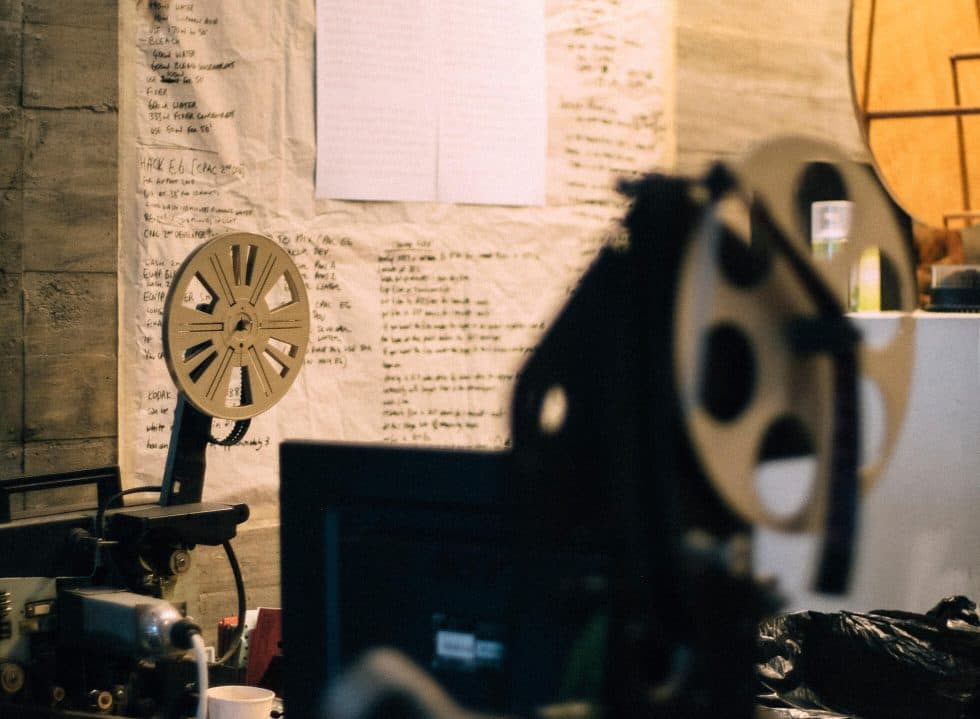 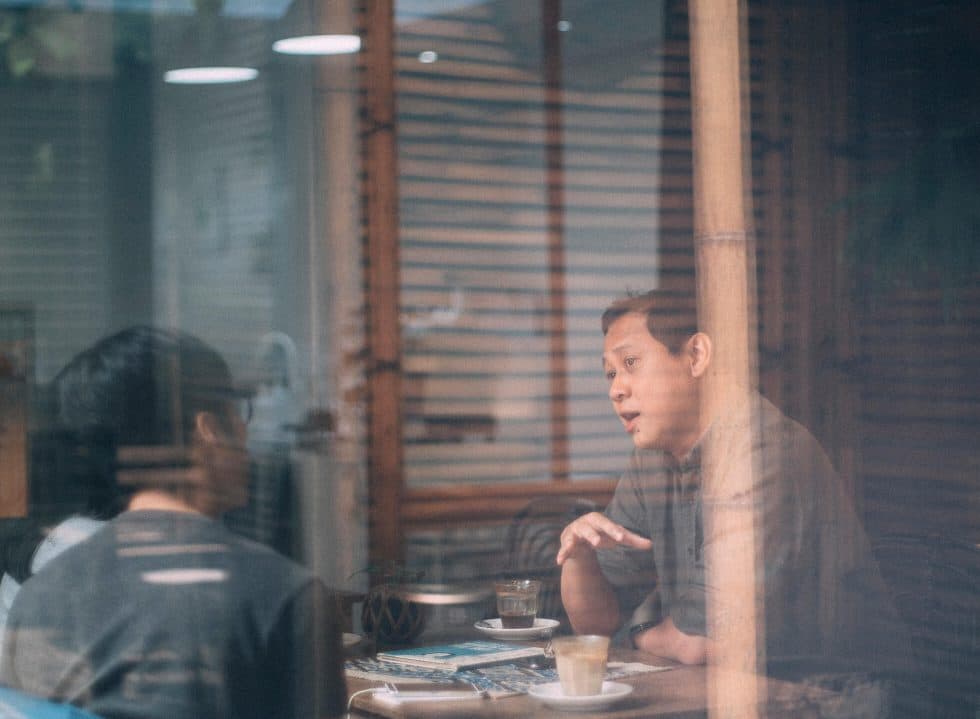 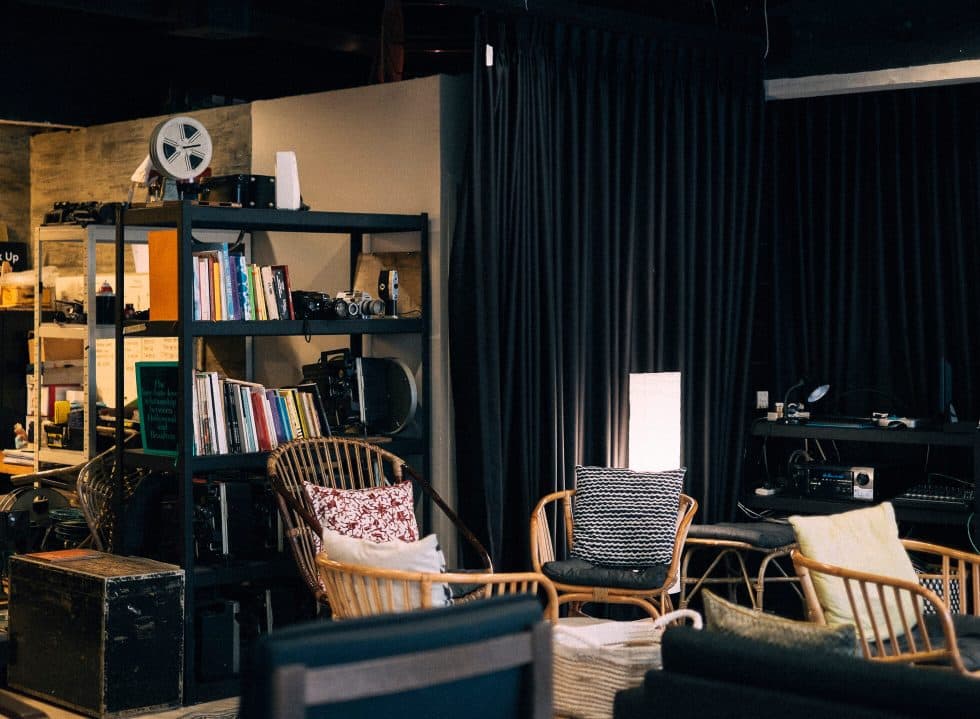 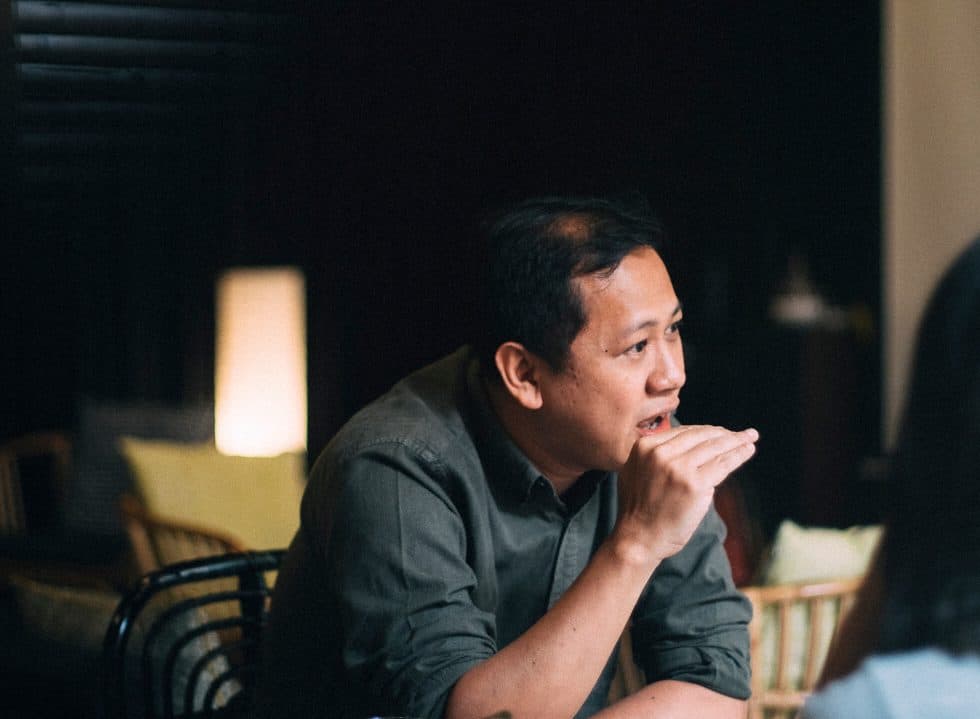 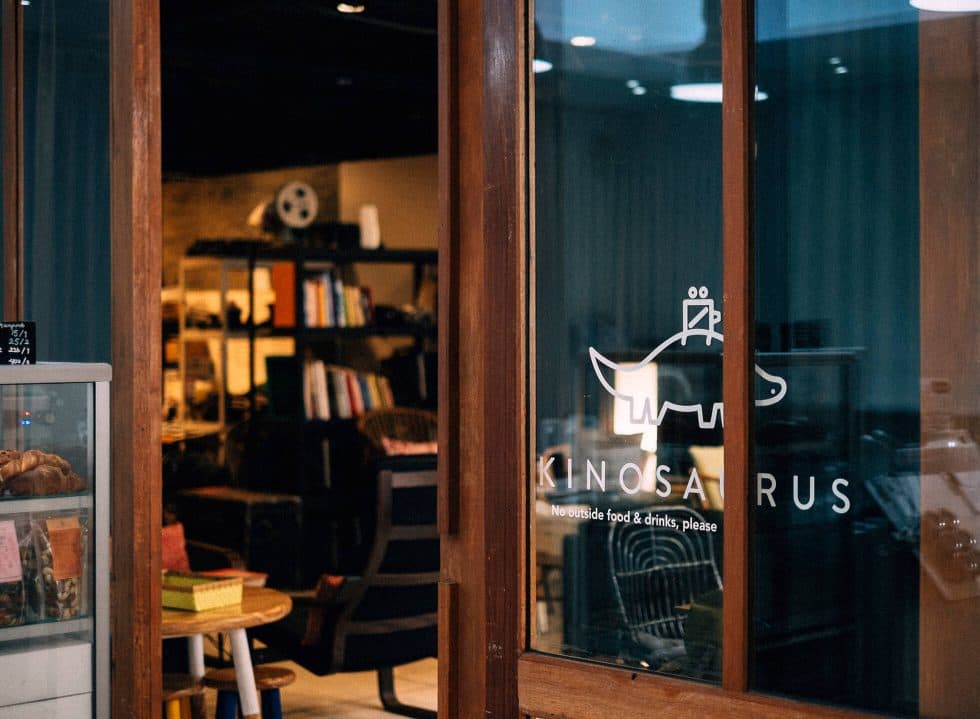 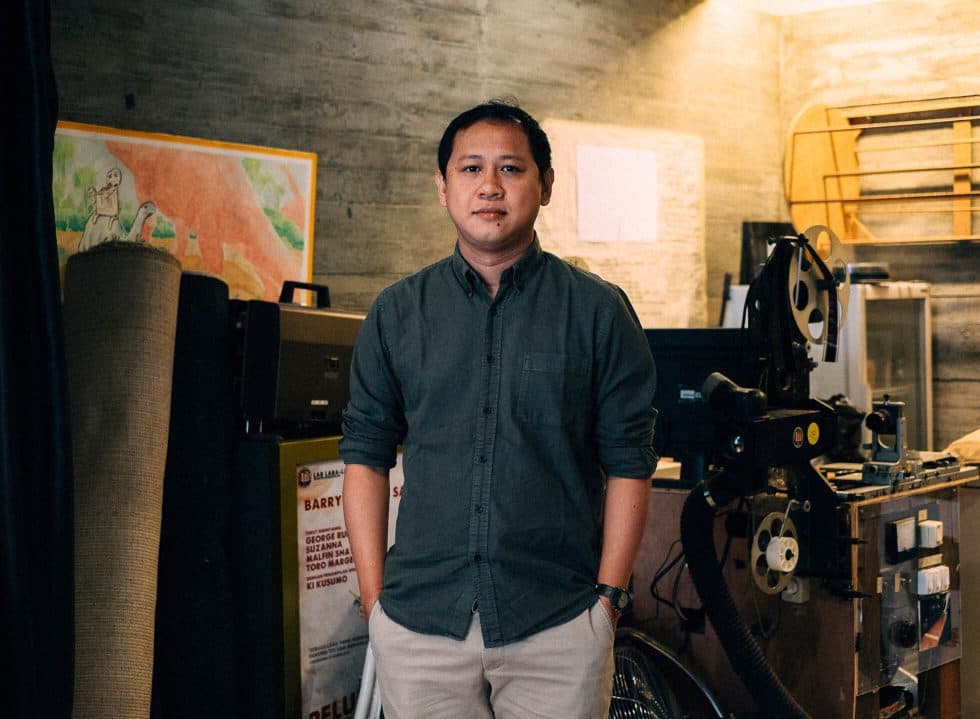 The One and Only Edwin

Share
Over coffee, the acclaimed indie filmmaker Edwin talks about being a dropout, meeting people from different backgrounds and his latest film, Posesif.

It can be pretty anxious interviewing someone like Edwin, the acclaimed indie filmmaker, mostly because there’s not much information to be unearthed about him. Eventually, you start to assume the worse. What if the question asked had been answered in another article? Would he think that I wasn’t prepared for the meeting? Or actually he’s a really private person who doesn’t enjoy interview, hence the lack of information about him? Yes, even the omnipresent Google can’t provide comfort at such time of need.

Amidst the uneasy thoughts, in comes Edwin, casually strolling into Kinosaurus, the micro-cinema that he co-founded over at Kemang, after placing an order at Ruang Seduh. Decked in a dark grey shirt, chino pants and a pair of black sneakers, Edwin is really an unassuming man that easily blends into his surroundings. Indeed, he can be that neighbour who passes you on the way to work every morning or that familiar face you often encounter at a neighbourhood coffee shop. An advantageous quality, given that as a director, it’s essential for him to recede from view while the camera is rolling and discreetly observes the actors in action.

Edwin was born and raised in Surabaya, capital of East Java. Growing up, during the 80s and 90s, the film industry must be almost non-existent, I ventured. “There’s none,” says Edwin with a laugh. Nevertheless, what attracted him to the industry was really the simple pleasure of watching film as a form of entertainment. “I really like watching films as an audience. I mean, back then I didn’t really think much on the process of filmmaking, just the end result. So when I found out that there are people studying films, I thought it was fantastic. Maybe that’s because of the lack of exposure back in Surabaya.”

“The idea for ‘Blind Pigs Who Want To Fly’ came from my own personal observation.”

Even though enrolling in engineering, economics and medicinal study was the norm back then, Edwin moved to Jakarta to pursue a degree in film over at Institut Kesenian Jakarta (IKJ) with his parents’ blessings. “They told me that if that’s what I’m interested in, then I have to do it whole-heartedly and take [full] responsibility for it. I have to work for it, but they didn’t forbid me,” says Edwin.

And it is during this time in Jakarta that provided him with diverse surroundings, where it left a big influence on him and his works. “I met a lot of new people from different backgrounds and races, people from different cities and towns. It all happened when I was in IKJ. Everyone has similar interest and passion, which is art, not just films – but of course, a lot of aspects can be connected to film. So over there I got quite a lot of inspirations by meeting people from different parts (of Indonesia).”

Despite dropping out of IKJ during his last year of study, (“I completed my final film but didn’t submit the report on time. They told me to re-do it, make another film in the following year but I didn’t manage to do the report and all, so I decided to withdraw”), Edwin went on to write and direct a string of short films and his first debut feature film, “Blind Pigs Who Want To Fly”. The latter tackled the uncomfortable issue of the identity of Indonesian Chinese in the country.

I ask whether it was a conscious decision to go for a heavy topic for his first feature film. “There isn’t any specific reason on what my first feature film was going to be. It came organically. The idea for ‘Blind Pigs Who Want To Fly’ came from my own personal observation. For me, this topic is actually not that heavy because it’s happening around me so I know a lot about the issue and it’s something I’m familiar with,” Edwin says as a matter of fact.

Four years later, he followed up with “Postcards From The Zoo”, a movie about a girl who lives and works in Ragunan Zoo, where Edwin and the film crew were surrounded by animals during the filming. This year, Edwin returns once again with a new film, “Posesif”. Starring Adipati Dolken and Putri Marino, the film follows two young lovers who are seized by the flame of first love only to discover that the path of romance isn’t as rosy as it seems.

“The film explores the types of emotions and feelings, wanting to love and to be loved in an excessive manner.”

“Posesif is about first love. It started off two years ago, when Meiske Taurisia, Muhammad Zaidy (both producers) and I decided to start a production house called Palari Films, we want to communicate with teenagers, because we are working in Indonesia and we watched a lot of teen films. There are actually a lot of them, but the theme and storyline around it are very similar. First love came up as an idea, but we want to make sure it’s still relevant in today’s society. The one thing that intrigued us was the change of medium, such as social media and the technology. From there, we came up with the idea of jealousy, how it can be easily triggered. For example, people can get into arguments because they leave their WhatsApp chat on seen. It can be really funny but can also be a serious matter, especially in an age where you just started to experience love and need to learn to control your ego.”

Just because the storyline revolves around two lovebirds that doesn’t mean Edwin is not going to delve deep into the issue. The film is unflinchingly brutal in its depiction on just how destructive first love can be. “The film explores the types of emotions and feelings, wanting to love and to be loved in an excessive manner. It’s that type of struggle that the characters have to face,” says Edwin.

I ask if he incorporated any personal experience when directing the film. “Well, probably a little bit, like stalking,” he laughs. “But back then, stalking has to be in a physical form, such as following someone with their bikes. Now, you can do it in different forms. But the feelings and rush that you get is still the same, afraid of getting caught, anxiety and all that, just with different tools.”

“As an actor, you need to have a different physical energy and I’m very impressed by that.”

Sensing that he’s more relaxed at this point (or perhaps, I was wrong and that it was me who’s tensed all along), I tease him on whether he’d ever act in his own film. “My friend once forced me to act in a short film. It was actually very simple, I just have to pretend to sleep. But I’m not interested in acting. It’s a different skill. As an actor, you need to have a different physical energy and I’m very impressed by that. And also, understanding that aspect, I personally really respect them and I know it’s not easy being an actor.”

If you were to observe carefully, Edwin always answers his questions in a narrative structure, in a sense that he often provides background story before moving on to the answer. No doubt that it’s a habit cultivated from his profession. That is why a conversation with Edwin is stimulating. There’s a beginning, a climax and an end, just like a movie. And you can’t help but to probe more.

Nearing the end of the interview, I sneak in one last question on whether he’d be interested in doing other genres of film. “As of now, I’m still making drama films. Action or mystic horror is a possibility, but not the one with suspense though,” he laughs.

Posesif is now screening in XXI cinemas. For more info about the movie, head to www.palarifilms.com/posesif. 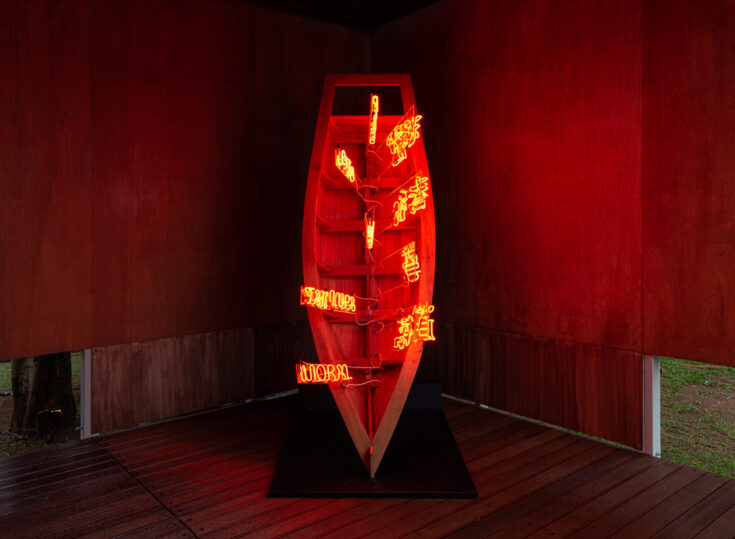