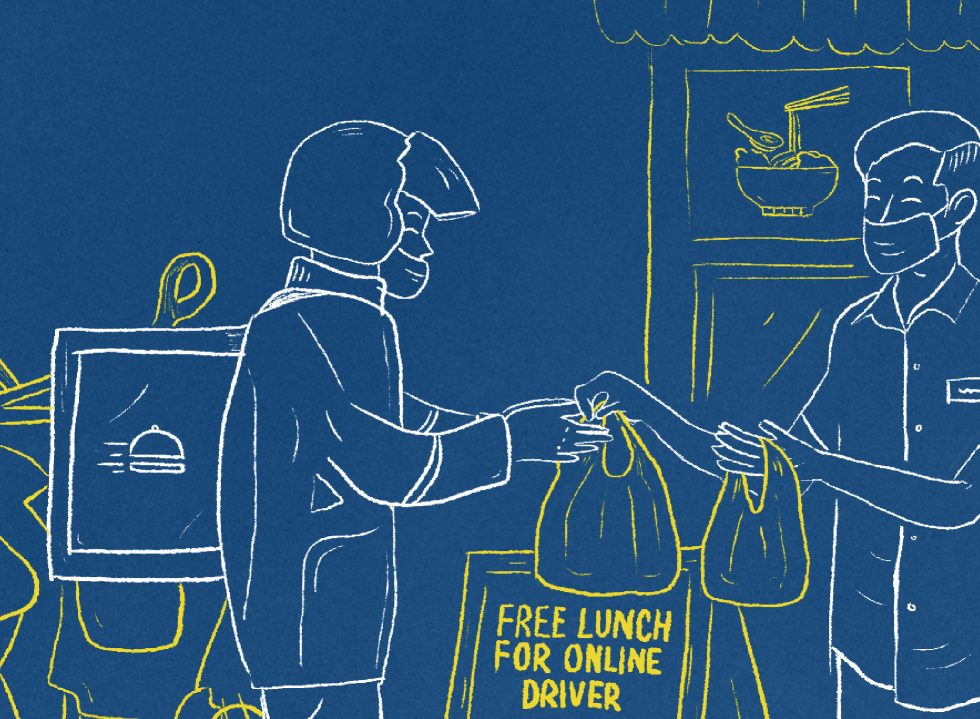 Share
In a pool of troubling news, a sliver of good ones may just be enough to keep one going. In this REMOTELY series, we compile the good news that has happened so far amidst the pandemic, from small acts of kindness by citizens to businesses mobilising for the better good.

In our effort to make social distancing less monotonous, REMOTELY is a special series from Manual Jakarta where we roll out comforting and practical articles to keep you company and motivated during this period of self-isolation.

It’s only been a few weeks since President Joko Widodo addressed the nation on COVID-19 and social distancing, encouraging people to work, study and pray at home instead. At the time of writing, over 3000 people have been infected in the country, with 280 dead (the highest in Southeast Asia), and 252 recovered. To add, institutions and industries shut their doors, many on the brink of losing their jobs and hospitals face a shortage of medical supplies.

In a sea of dejected news (and fear-mongering misinformation), a sliver of good ones may seem pale in comparison. But they can also be a source of hope that many hold on to see the light at the end of the tunnel. Therefore, we compile the good news that has happened so far, from improved air quality and businesses mobilising, down to simple acts of kindness done by strangers, further revealing the best of people in times of need.

It’s not surprising that the direct impact of the majority staying at home is increasingly felt with Go-Jek and other e-hailing riders. “I usually get 400k per day, now I only get 100k at most. The lowest I received so far was 70k,” says Irfan Riyadi, a motorcycle taxi driver working for Go-Jek. With visibly few encounters on the streets, orders and earnings from ferrying commuters naturally took a sharp dip. “My work pattern also changed. Usually, I would already be on stand-by at 5 am in the morning, as many students go to school at 6 am. But now, I start my day much later.”

To relieve some of the burdens, citizens take the matter into their own hands by buying food and beverages for the riders instead. Using delivery apps like GoFood and GrabFood, many started to share this gesture on social media in hopes that others would hop on the bandwagon, including Ligwina Hananto, actress and co-founder of QM Financial, who started the hashtag #TraktirOjolYuk (“let’s treat online ojek”) on Twitter. Many followed suit, sharing their own experience as proof of the deed.

With gig workers in e-hailing companies at most vulnerable to the situation, Go-Jek has also emphasised its commitment by providing financial security for the welfare and livelihoods of its driver-partner during this pandemic.

Businesses stepping up to the plate

The public continues to mobilise by giving back, bolstering the country’s COVID-19 mitigation efforts. Big corporations like Bakrie Group have donated 20 billion IDR to the country’s rapid task force, while Wardah Cosmetics donated 40 billion IDR worth of medical supplies to hospitals.

Brands and businesses across sectors also get creative with their initiatives. Organised by Narasi (TV host Najwa Shihab-run media company), singers Andien, Kunto Aji, Ari Lasso and many others unite in a virtual concert called #DiRumahAja where they collected about 12 billion IDR in donations through the crowdfunding platform, Kitabisa.com. Working with the same platform, establishments like Three Folks, MONKS Jakarta and Lewis & Carroll Tea, also joined hands to sell chocolate beverages under the initiative #CokelatPeduli, where 100 per cent of its profits will be donated to hospitals and frontliners.

One of the things visibly noticed since the stay-at-home measure took effect is the presence of striking blue skies all over the city. Similar to other quarantined areas, notably China and Italy,  Jakarta also experienced a pick up in air quality due to much less mobility.

In a data report released by Jakarta Environmental Agency, the organisation monitored a decline in air pollutant concentrations by 33 per cent. Significantly reduced activities on the streets contributed to this new data, in addition to intensified rainfalls, as told by the organisation’s spokesperson. Other traffic-prone cities like Los Angeles and New Delhi also experienced the same changes. Although experts didn’t see this translating to long term effects—or even as a silver lining—less pollution is always something good to take away from the situation at hand.

Fortunately, Indonesia is not about to run out of helping hands. This time, countries like South Korea (who has been lauded for its leadership in responding to the pandemic) and China are supporting the country with medical kits and supplies.

South Korea’s industrial conglomerate, LG, is set to send 50,000 diagnostic test kits to COVID-19 hospitals in the country. China, on the other hand, has shipped medical gears (including N-95 masks, protective clothing, goggles, gloves, shoe covers, infrared thermometers), and has since then reiterated its commitment to help Indonesia in battling the pandemic. In the name of solidarity, it’s only a matter of time before nations help each other out to bend the curve of the spreading virus. After all, this is a battle the world should all win.