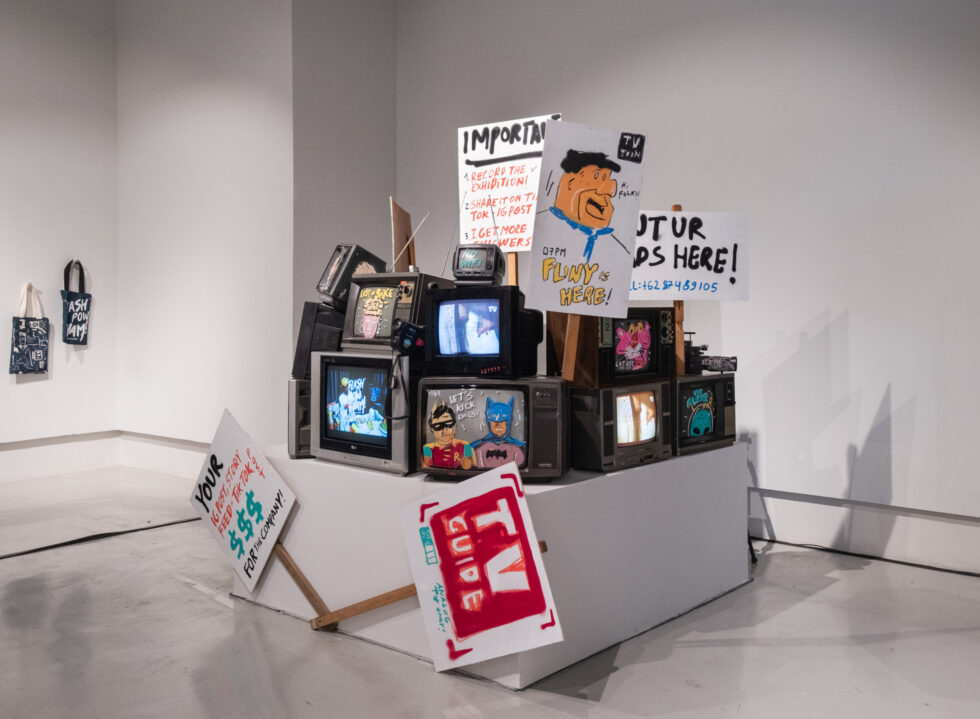 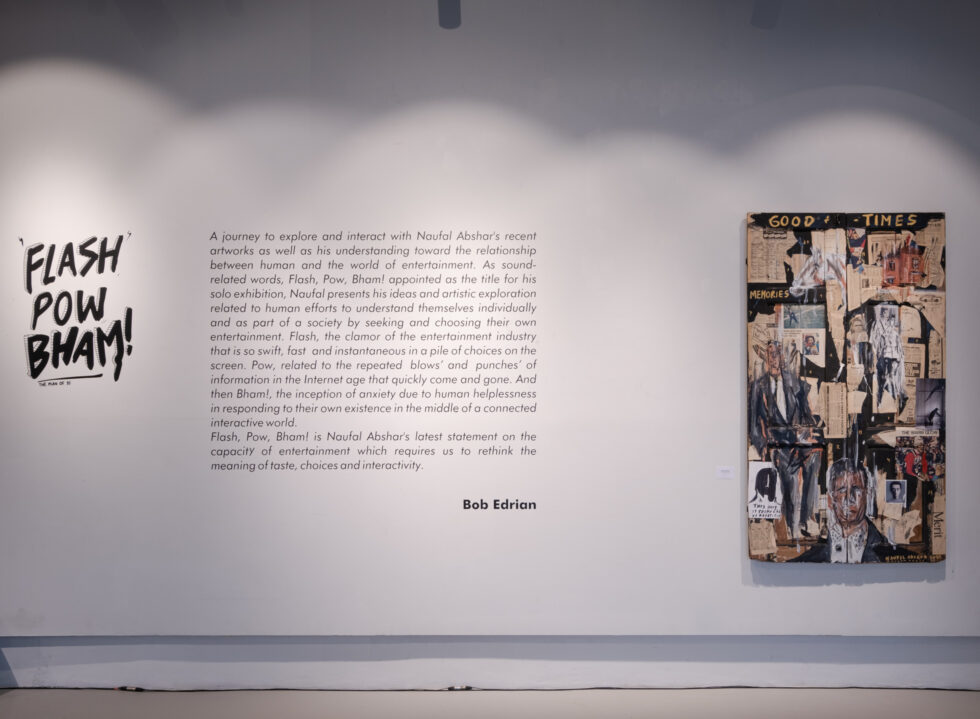 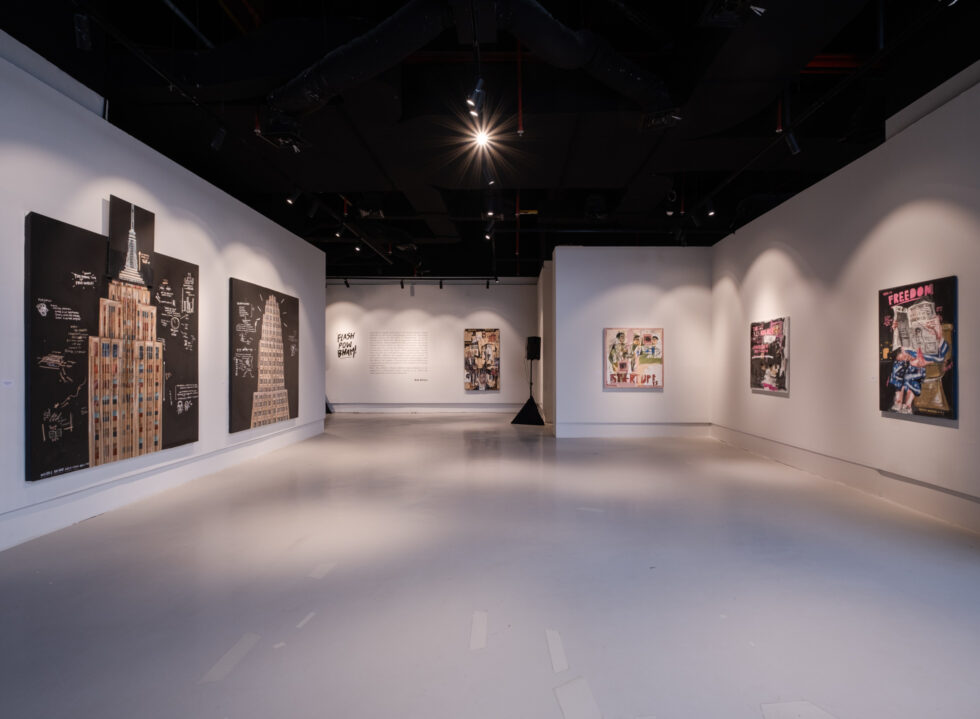 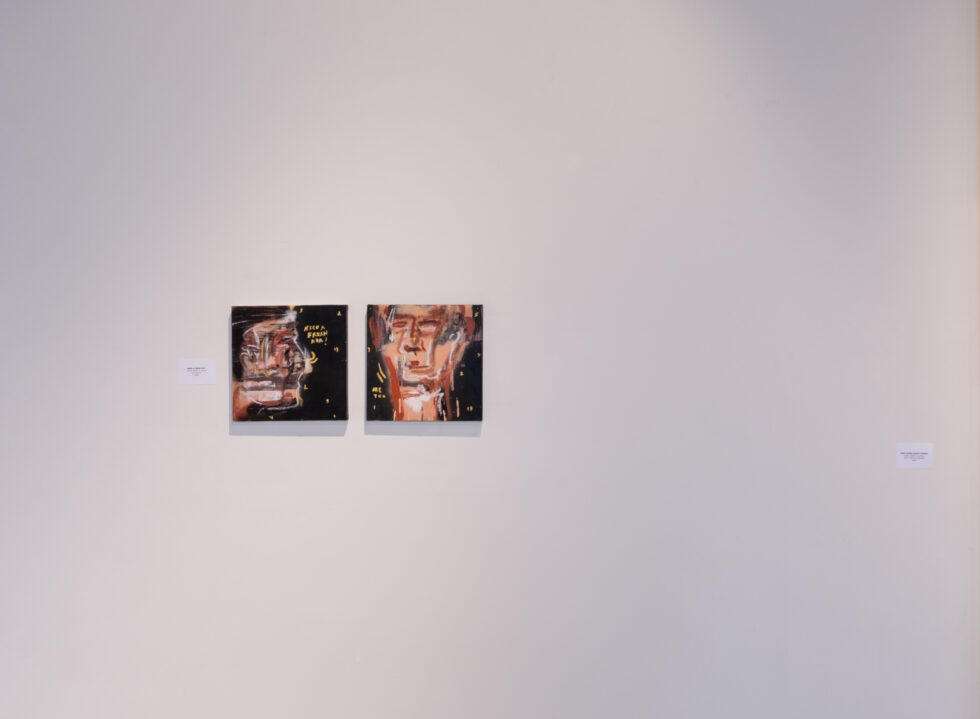 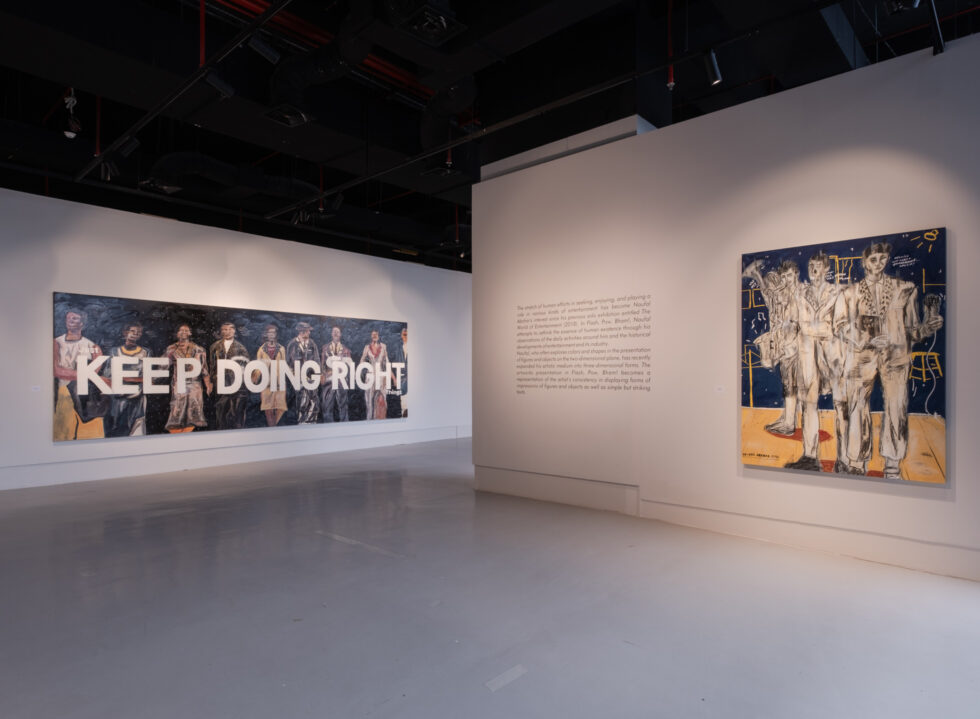 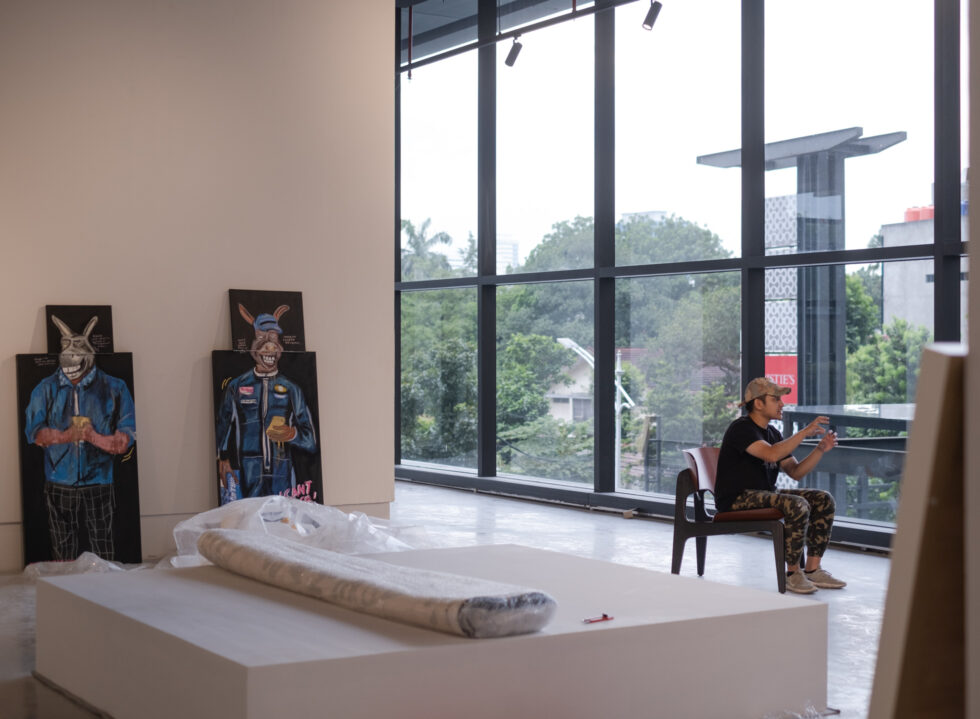 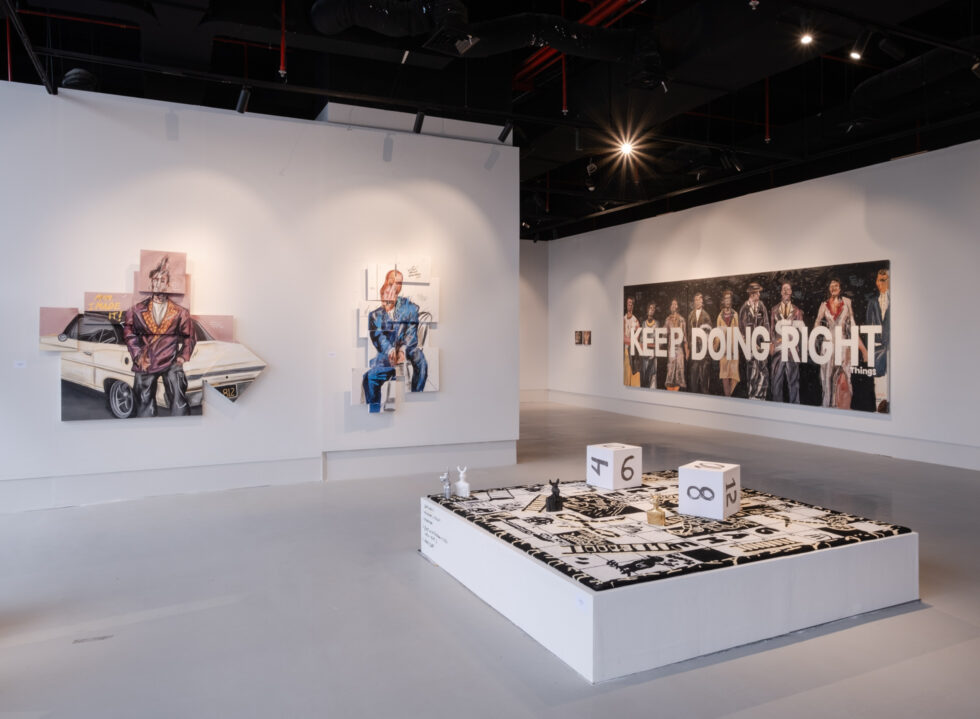 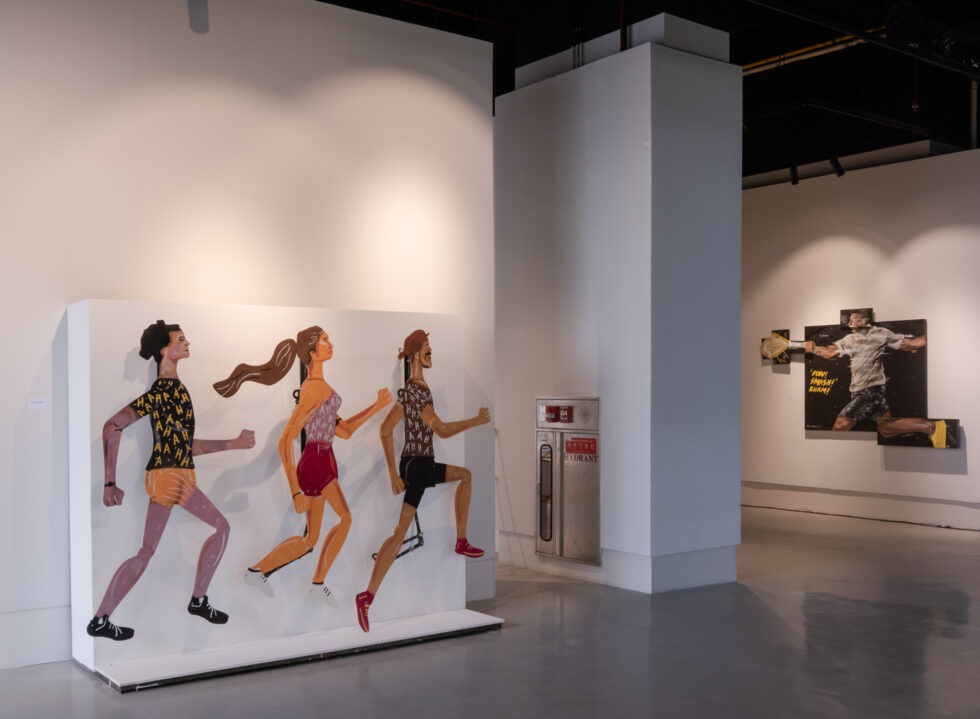 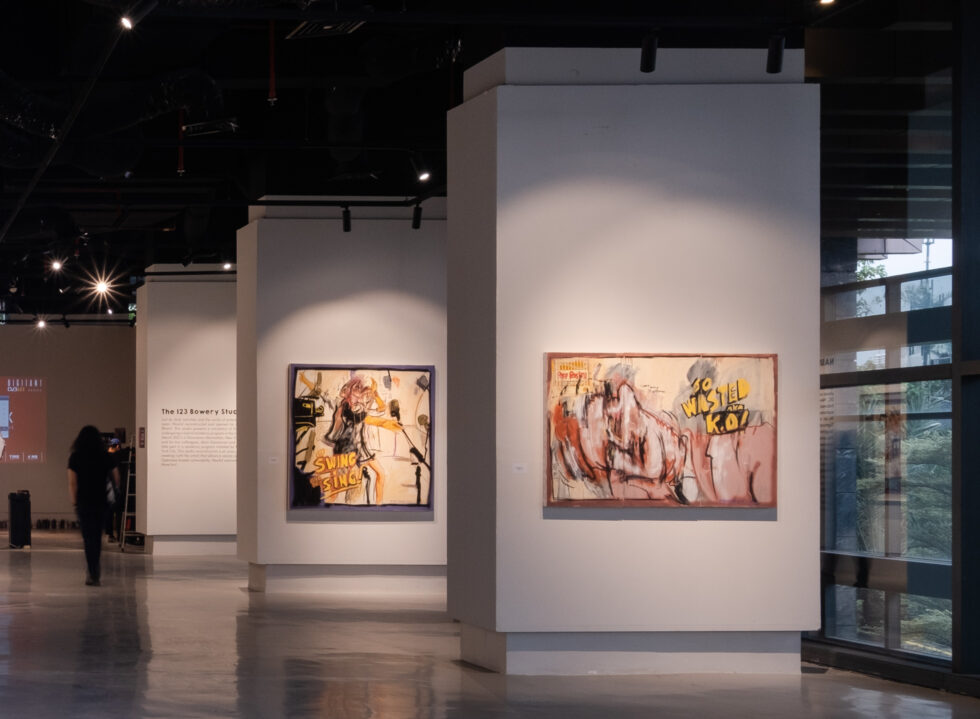 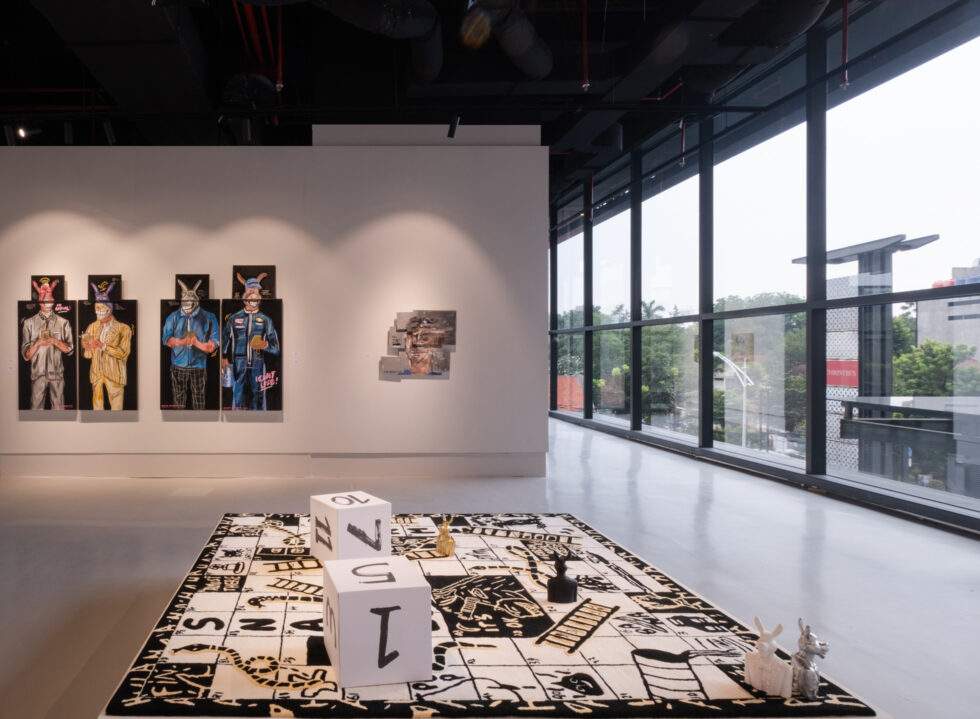 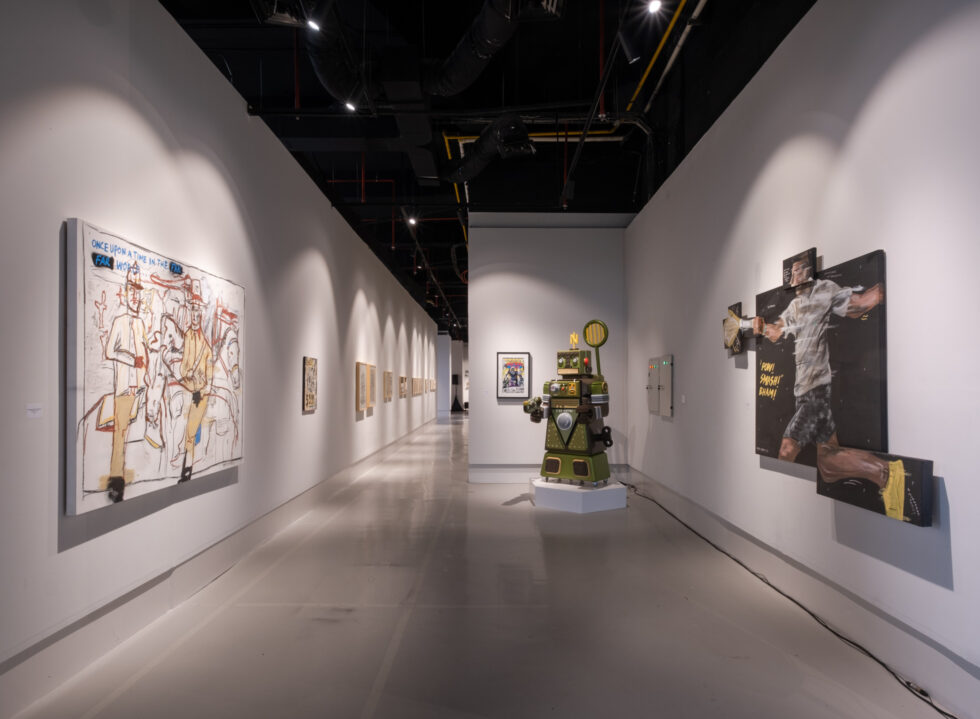 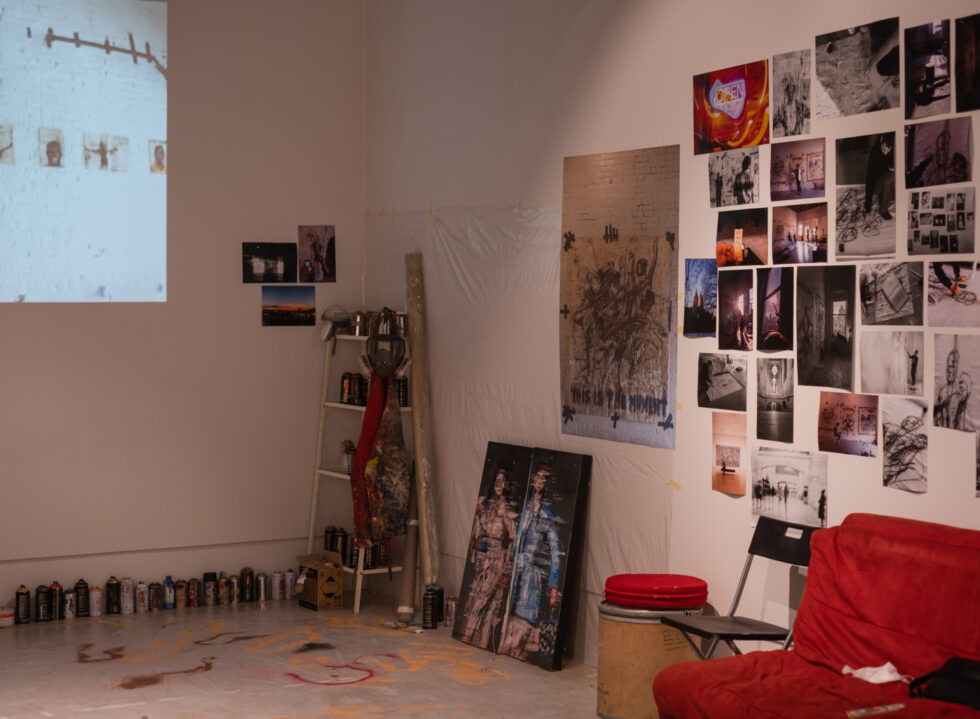 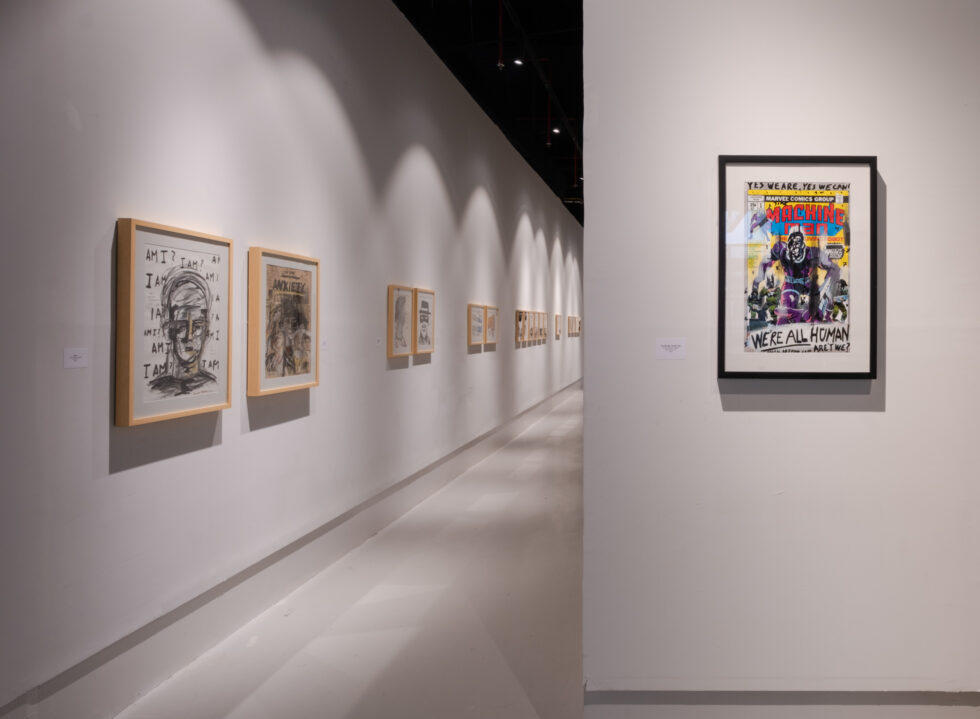 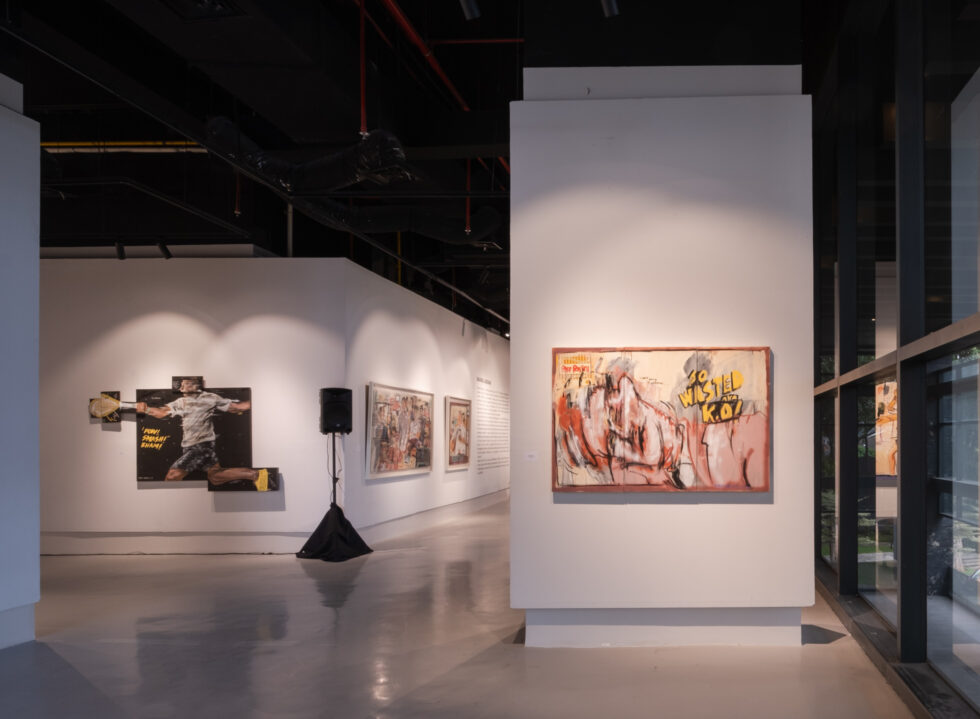 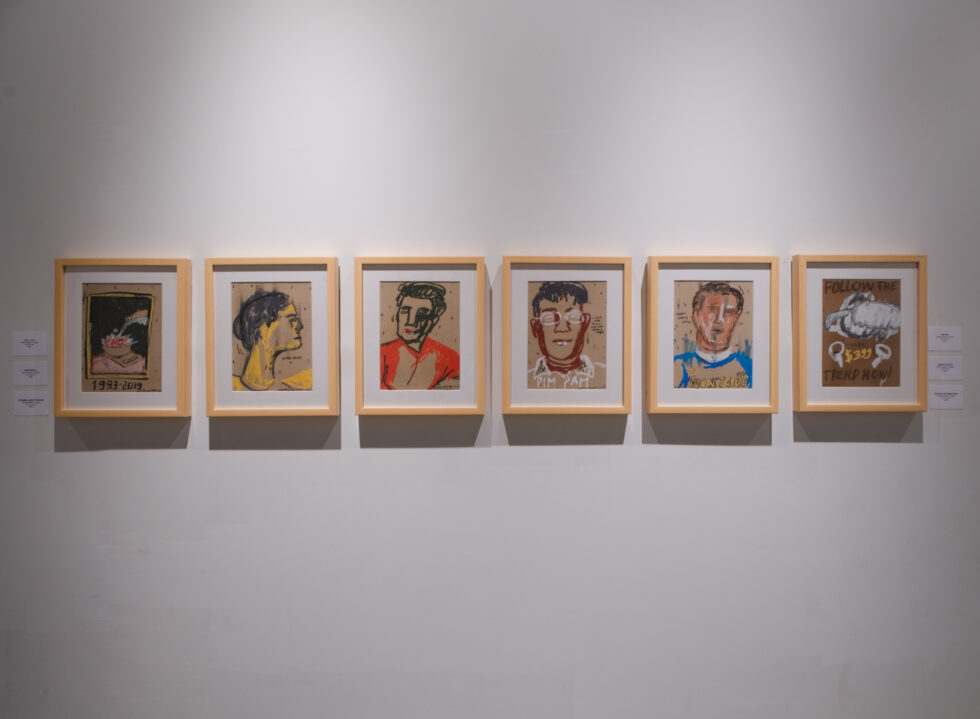 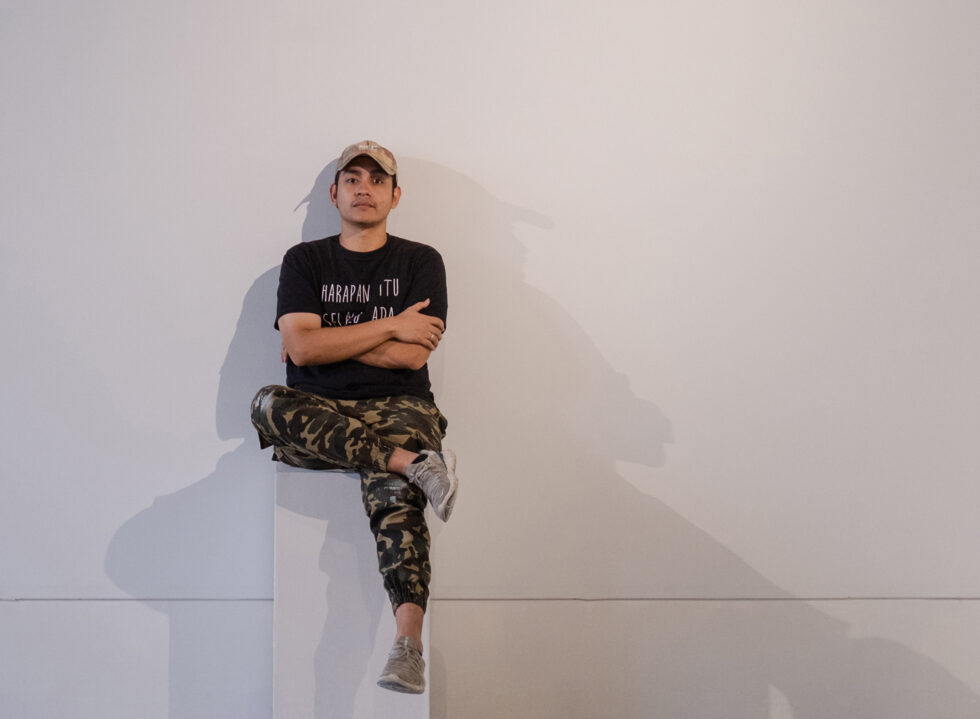 Share
Through a series of attention-grabbing paintings, drawings and installations, Naufal Abshar questions and comments on the volatile dynamic between humans and the entertainment industry for his solo exhibition, Flash, Pow, Bham! at ASHTA’s SPAC8 from November 26 to December 18, 2022.

As an artist, Naufal Abshar understands the nature of public attention. He himself stands in the limelight; recognised widely for his ‘HAHA’ series and, most notably, as the man behind the award-winning album cover of Kunto Aji’s ‘Mantra Mantra’. His attention-grabbing works explore the varied manifestations of humour and laughter in the context of social critique, a signature style he has established since his dissertation for LASALLE College of the Arts, Singapore and Goldsmith University of London where he pursued a degree in fine arts.

Likewise, Naufal’s solo exhibition ‘Flash, Pow, Bham!’ at ASHTA’s SPAC8 marks a natural progression to his artistic exploration. Tagged with the same ironic humour that has grown to define much of the artist’s work, the exhibition ponders the volatile nature of the entertainment world—one that constantly strives to hold the public’s attention. ‘Flash’ represents the industry’s swift current, ‘Pow’ signifies the overpowering barrage of gossip and news, while ‘Bham!’ captures the explosive aftermath that follows the anxiety of existing amidst it all.

“The understanding of the tug of war between the act of entertaining and the act of being entertained is a main territory that inspires Naufal Abhsar’s work,” wrote curator Bob Edrian in the curatorial text for ‘Flash, Pow, Bham!’.

Naufal fittingly built the foundation of this concept with drawings that incorporate early to mid-20th-century newspapers from his personal collection, representing media in its analogue state. Exemplifying the ephemeral nature of news headlines, Naufal uses bold colours to draw over them, thus recontextualising their content with his perspective.

A case in point is his work on Elvis Presley, ‘Viva la Capitalism’ (2022), which is supported by a collage titled ‘The King is Here’ (2022). Through this combination, he adds his own commentary on the tragic stardom of the rock and roll legend as shaped by the entertainment industry. “HE WAS KING, BUT THE INDUSTRY MADE HIM POWERLESS…,” reads the small text.

“It was a pivotal era when newspapers were considered the most reliable source of information—but really, they could just as easily be manipulated. [These newspapers] are like time capsules. When I draw over them, it’s like I’m creating a new story [over the original] in the contemporary era,” shared Naufal during an interview with Manual on the eve of the exhibition.

The exhibition itself kicks off with an encouragement for visitors to get involved by taking photographs and recordings and posting them on social media, amplified through a sign in the eponymous ‘Flash, Pow, Bham!’ installation. An invitation that is further extended by way of interactive installations like the ‘Snake Game’ (2022), a scaled-up board game inspired by the Indonesian ular tangga that prompts visitors to capture and share the moment of playing it. This interaction with visitors showcases the modern-day liberty that allows everybody to be a creator on their own platform, and by extension, an entertainer by way of technology.

But like all things, there’s a downside to this interconnectedness, and Naufal reveals his personal battle on the matter. For all his achievements, the artist often still finds himself in a state of comparison due to social media. He expresses his weariness through works like ‘Home Sweet Home’ (2022), in which Naufal forlornly wishes he could enjoy simple entertainment at home without the nagging desire to meet societal expectations. And there’s also ‘Enjoy Sob!’ (2022), a painting of a mukbang YouTuber that digs into how this constant need for validation that comes with being an entertainer spoils the simple joy of eating.

“My moment of awakening came during the pandemic, as during that time the only entertainment was on screen. Everyone is making content, daily activities become content and the boundaries between what is real and what is not are blurred. Andy Warhol once said that one day, everyone could be famous in 15 minutes. Now it’s 15 seconds,” mused Naufal.

In keeping the joy of creating amidst this pressure, the artist thinks the best way is to stay hungry. And it shows in the exhibited works. Capturing and poking fun at the day-to-day elements of the society around him, 80 per cent out of a total of more than 30 artworks are created within the two years of the exhibition’s preparation. Sometimes conventions are broken, and a single painting combines multiple canvases to form a picture. Most—like the Elvis Presley work—have texts to add context in true Naufal Abshar style.

Each of these works is devised to conquer the space and the attention of its viewers—and by extension, their social media audience. That much is clear from the beginning. But this deliberateness leaves one open question for visitors to wonder: At this point, is art here still only confined to the paintings on the wall? Or does it also include the very act of witnessing and sharing moments from the exhibition as both the entertained and the entertainer?

‘Flash, Pow, Bham!’ will run from November 26 to December 18, 2022 at SPAC8 at ASHTA and is open to the public without registration or any entrance fee.