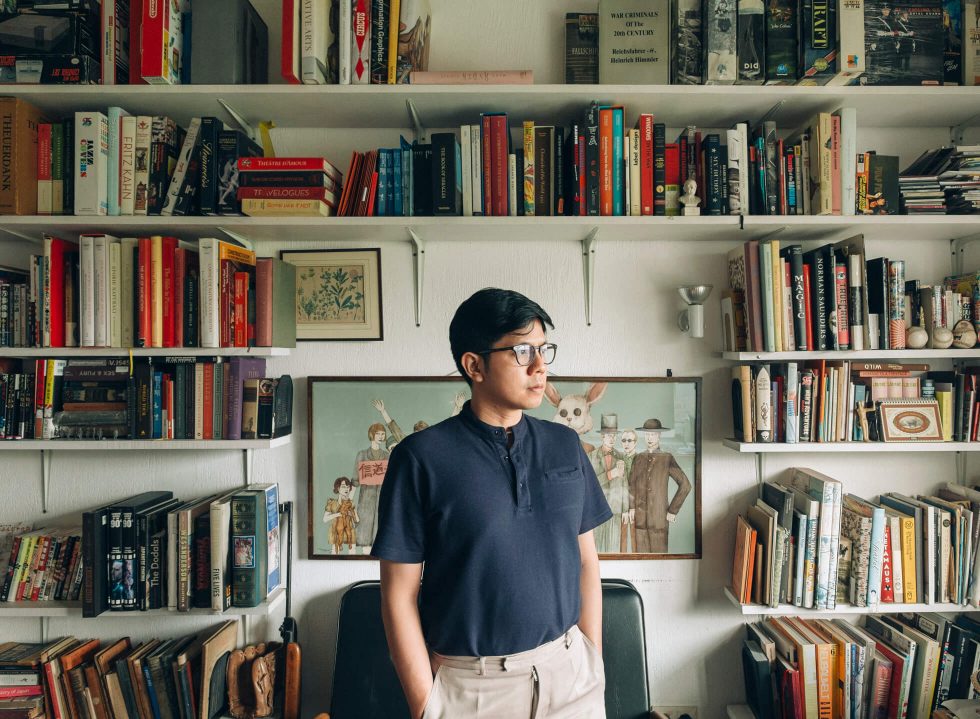 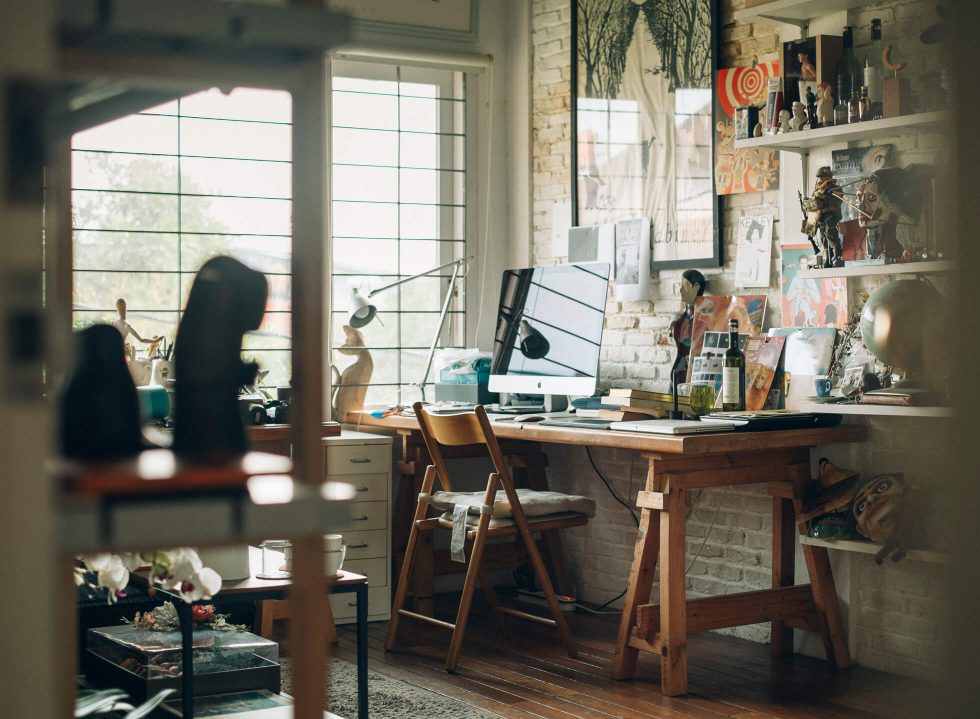 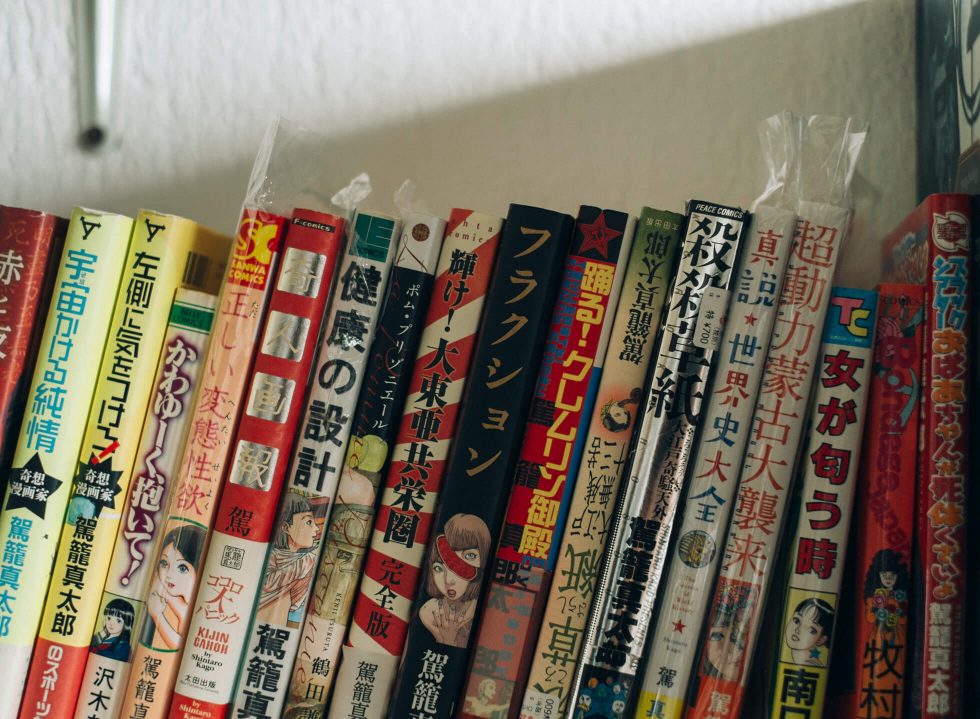 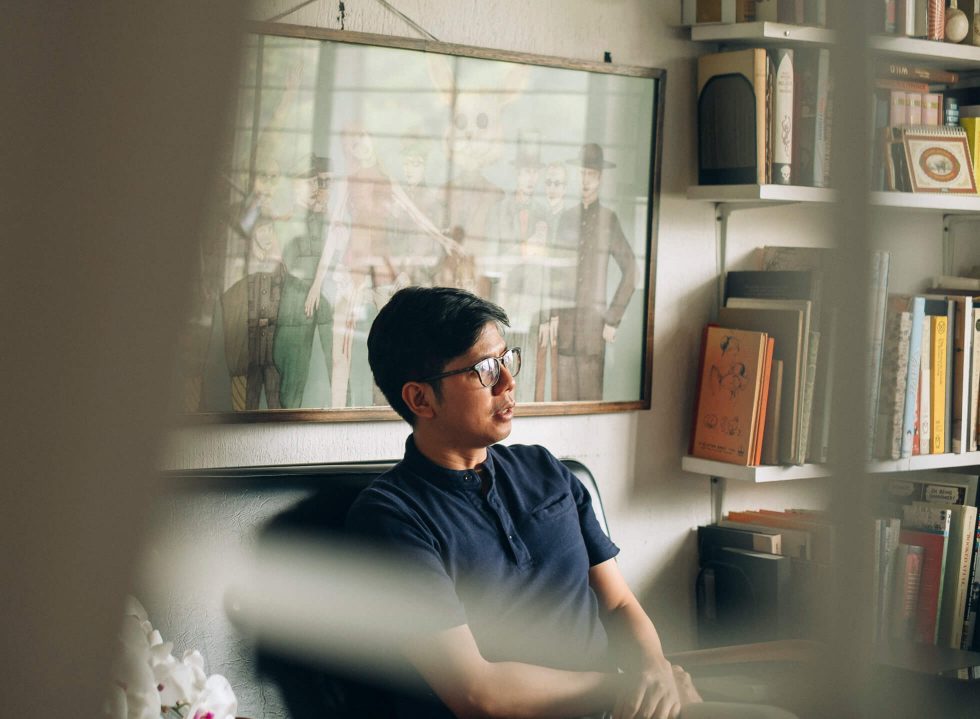 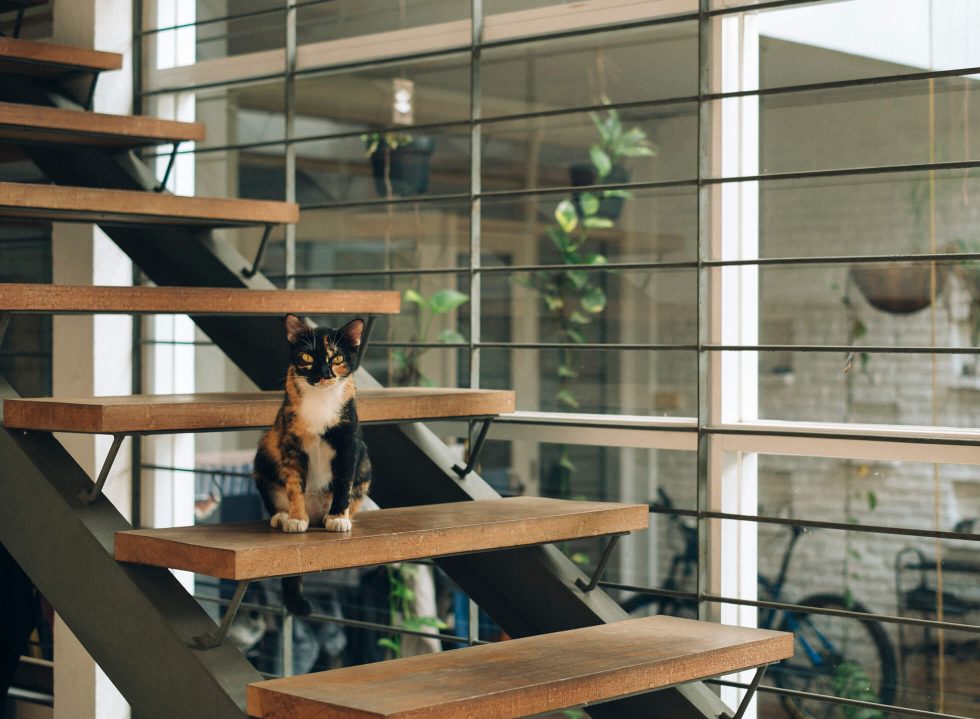 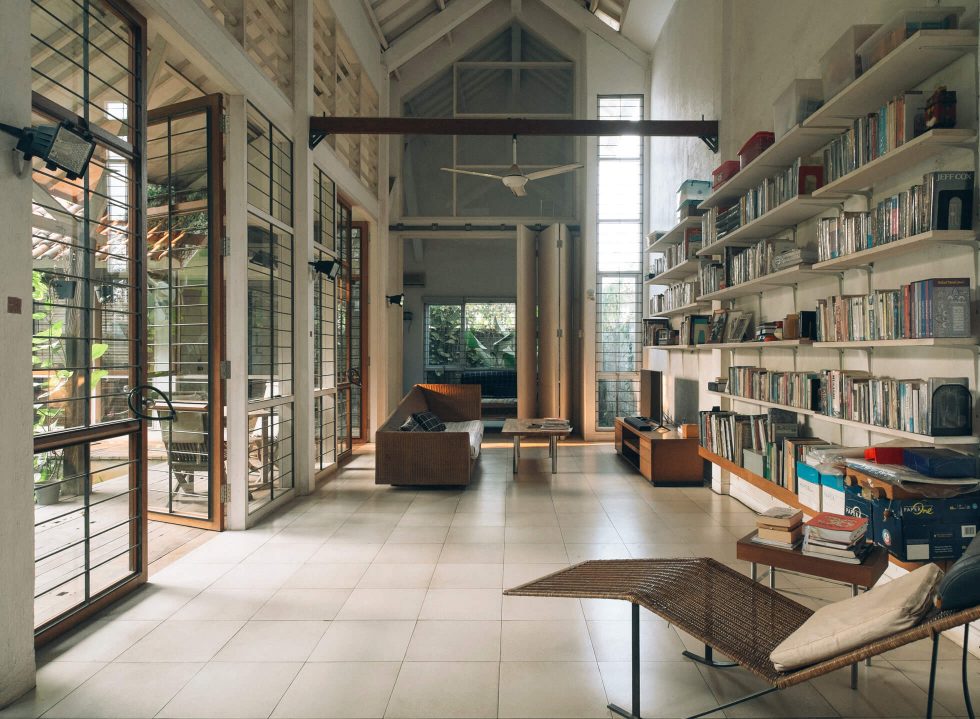 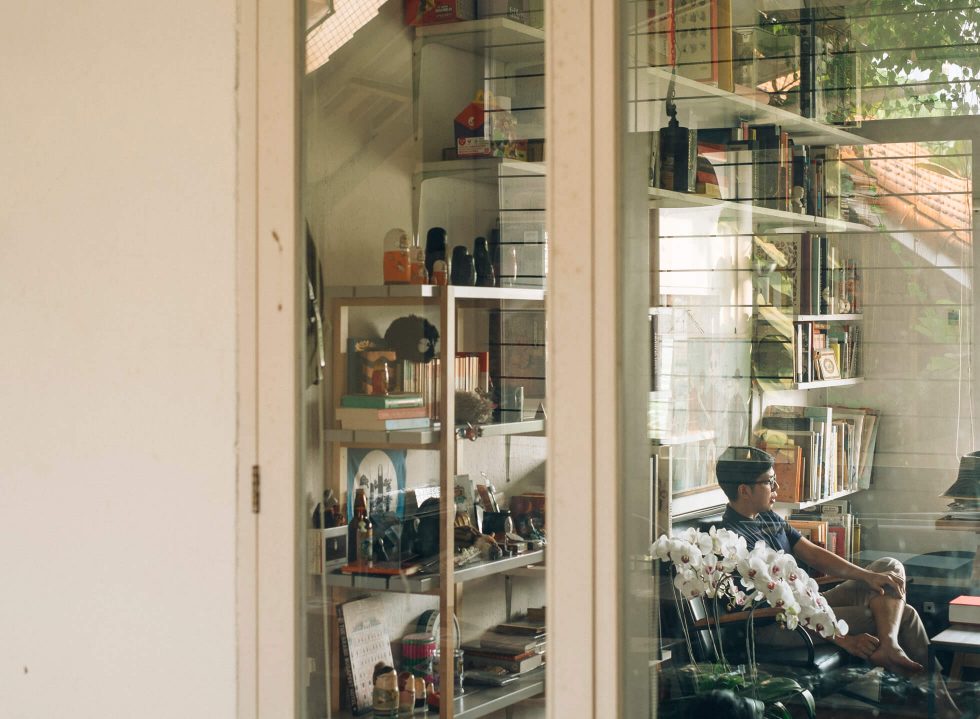 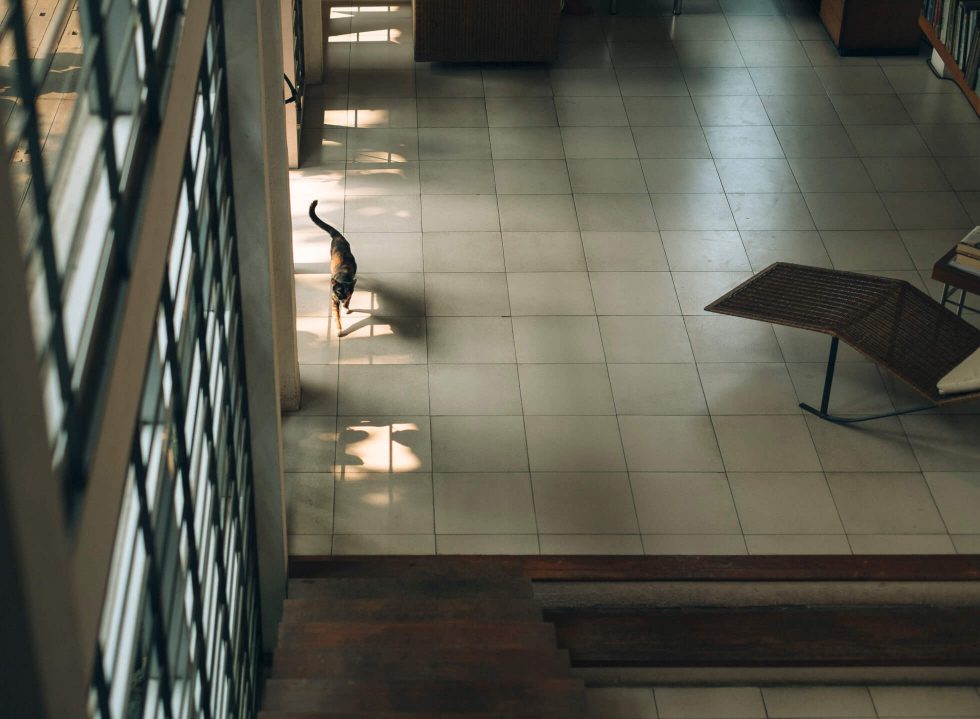 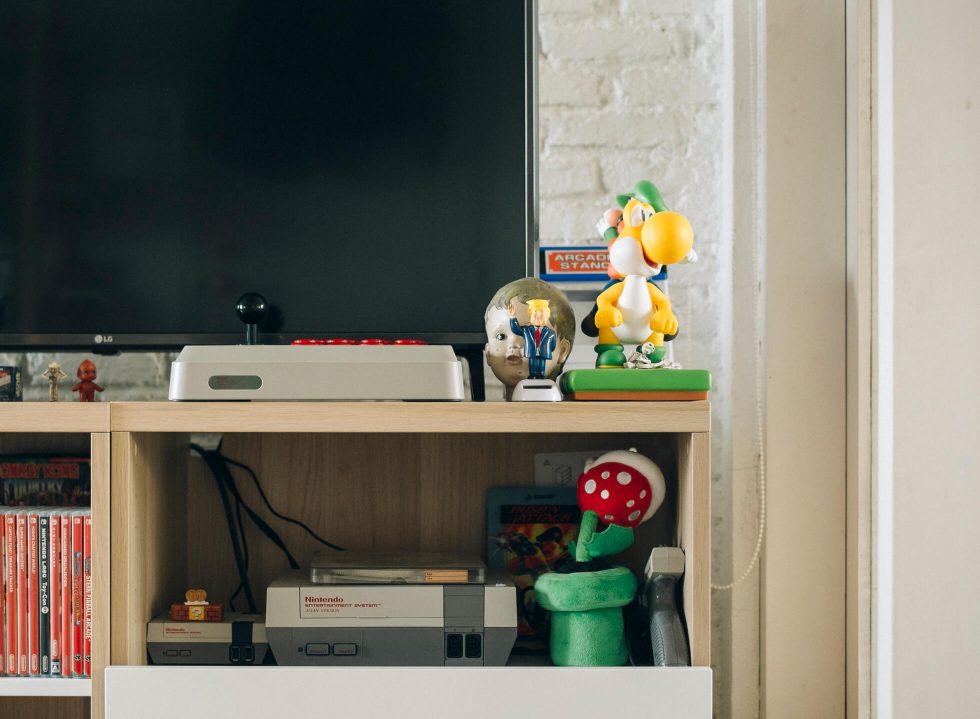 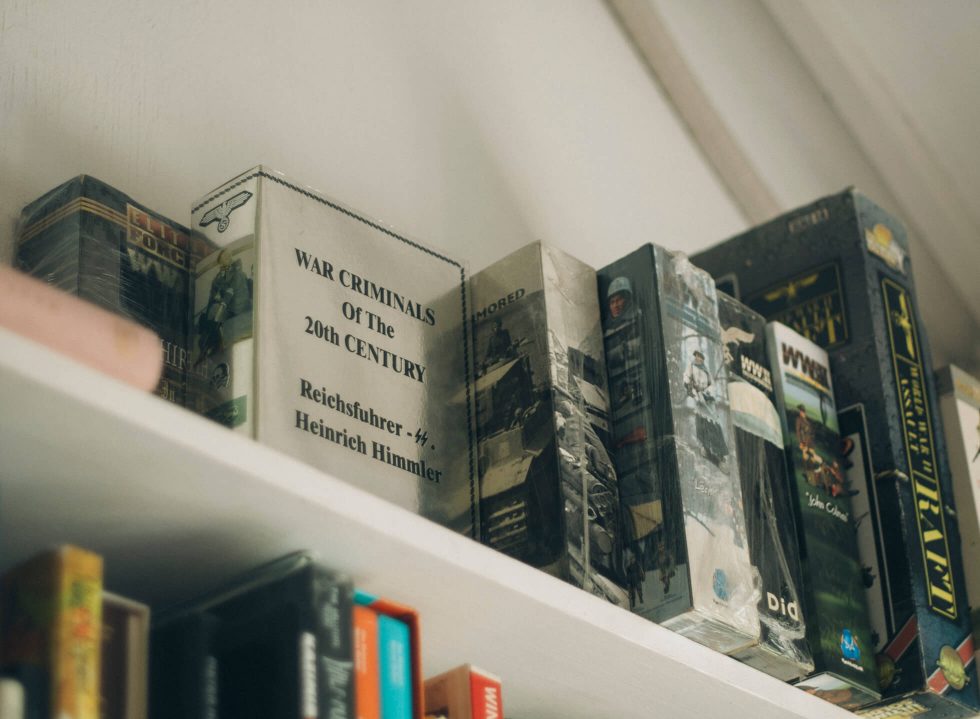 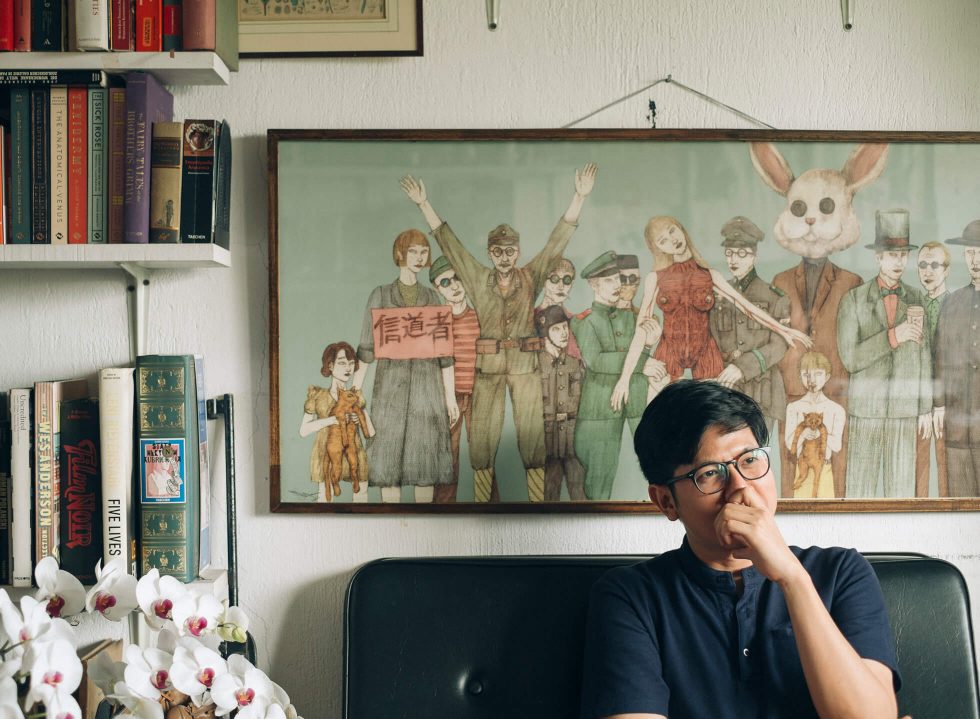 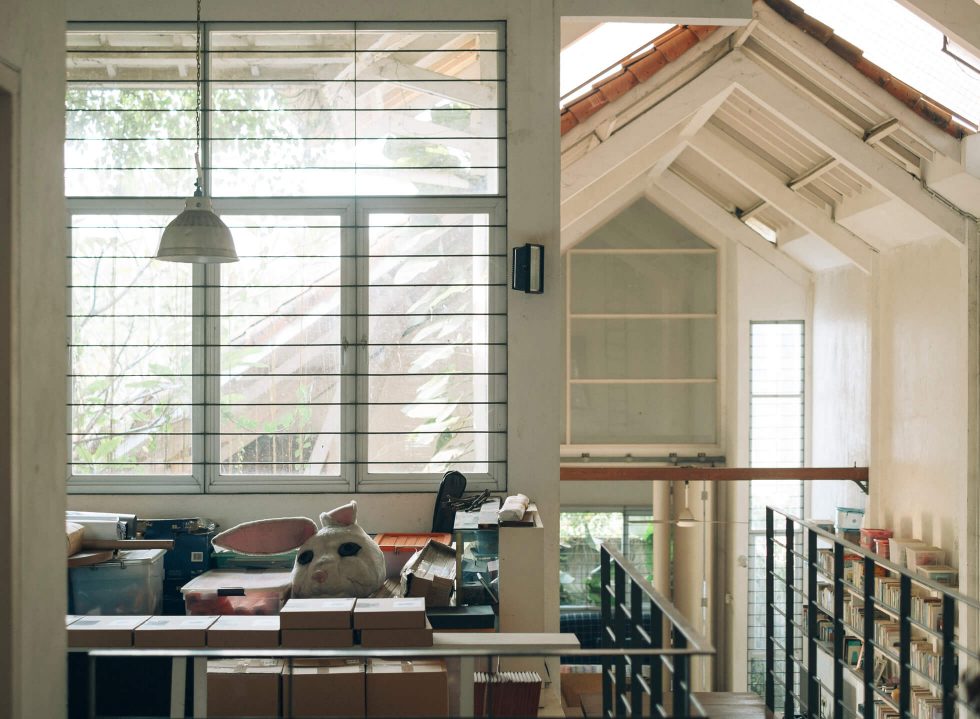 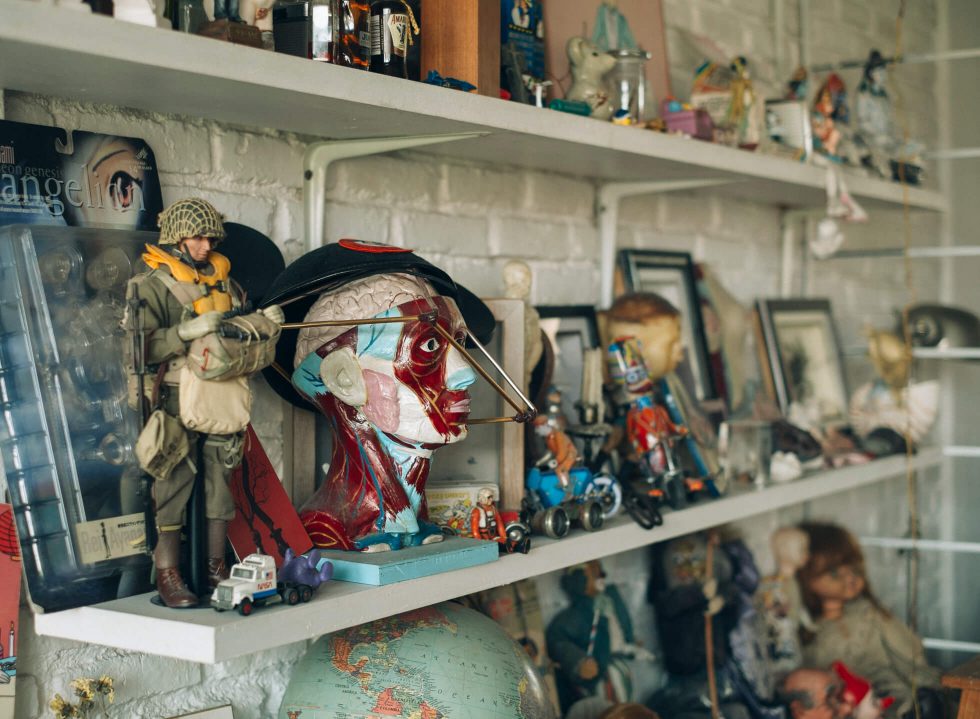 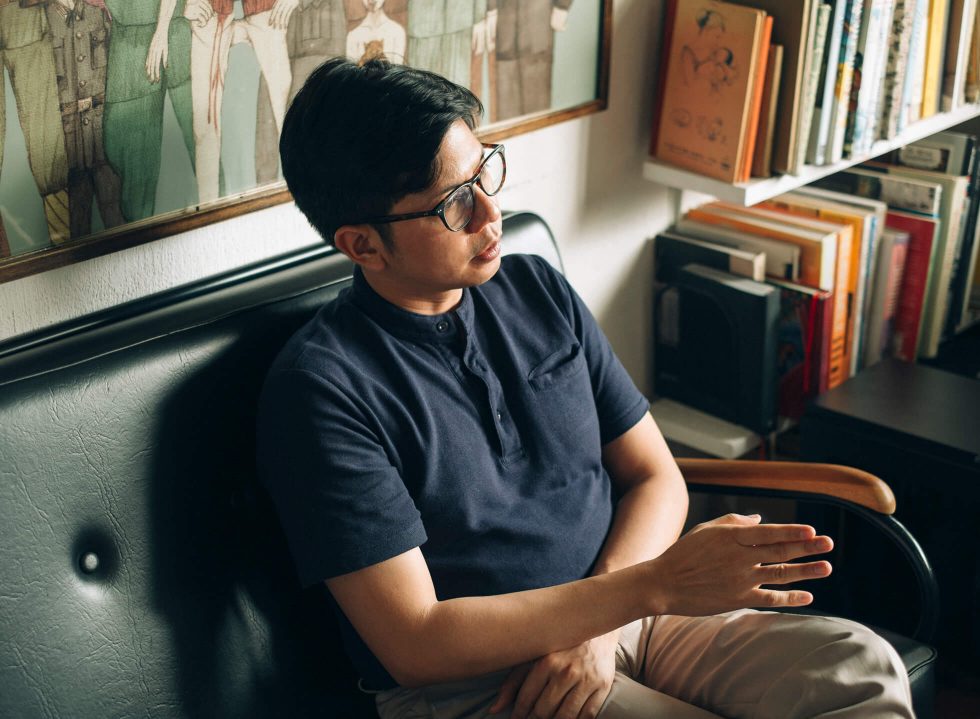 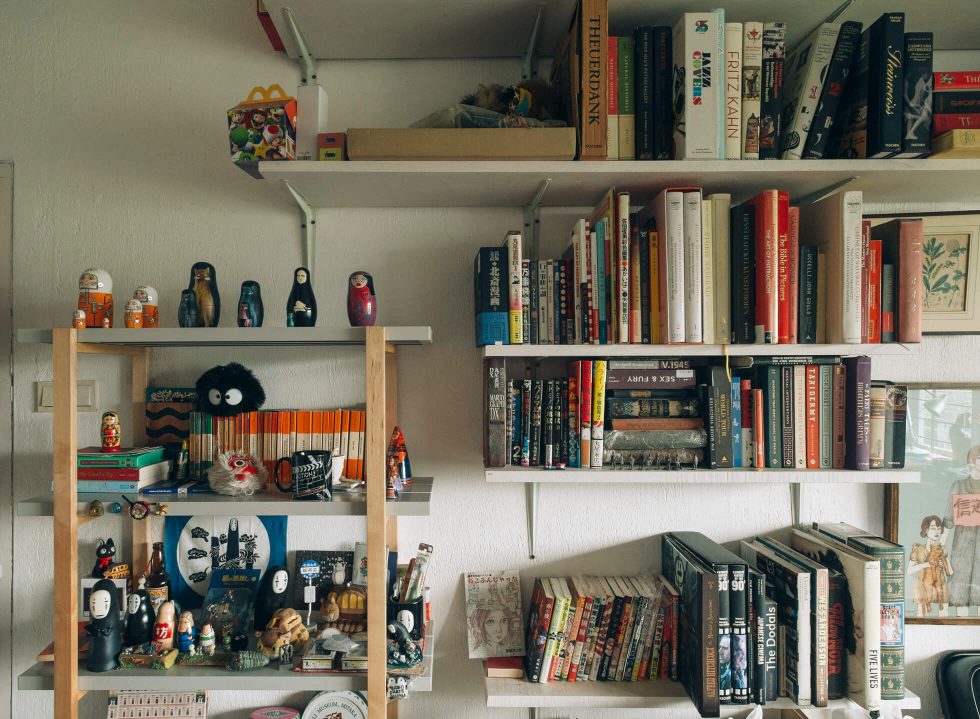 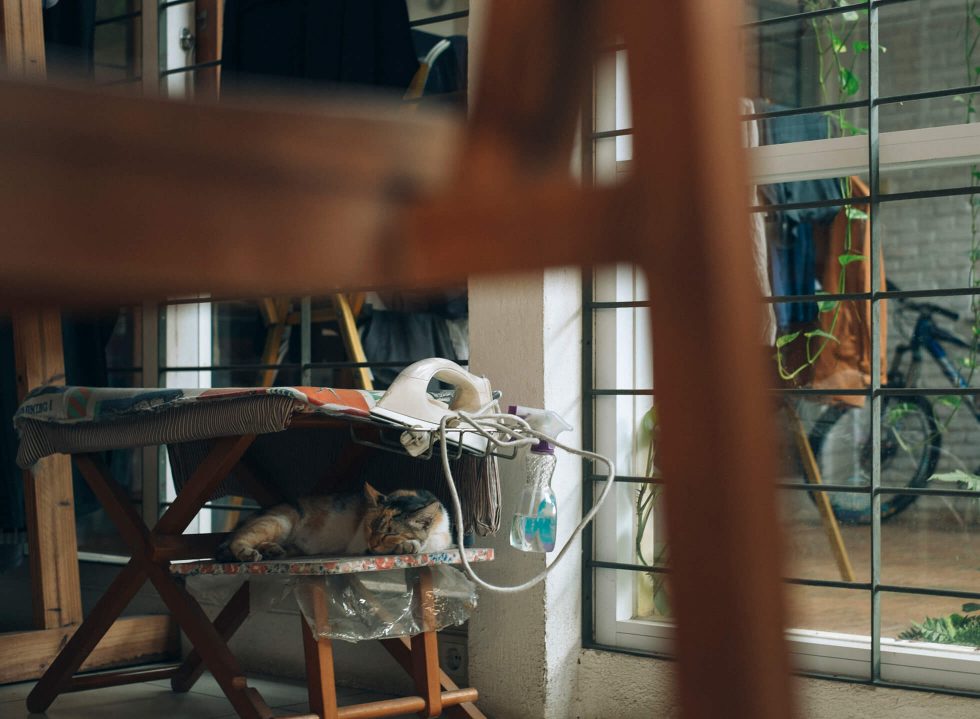 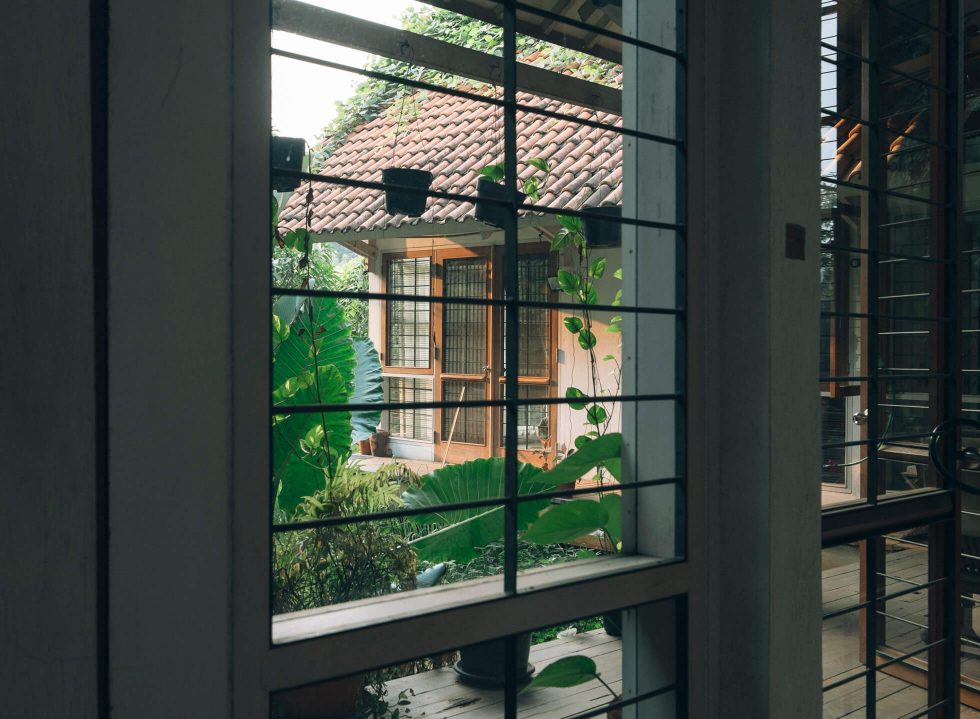 The Fantasy World of Jordan Marzuki

Speaking to Jordan Marzuki is like partaking in Harry Potter Bertie Bott’s Beans. You know what you’re in for but not quite sure what you’re going to get from the graphic designer slash filmmaker slash publisher slash lecturer. We meet in his studio – a cosy room complete with a mezzanine that he uses for naptime – on the second storey of the home where he resides with his wife and parents. Decked in a navy henley shirt and a pair of cream khaki pants, the bespectacled Jordan cuts a bookish figure. You’d somehow expect him to serve milk and cookies for his guests. Instead, Jordan pours us red wine.

In a way, we’re celebrating the successful launch of his book, ‘War, Astronaut, Death, Violence, Floating Mountain and Roman Soldiers’. An archive of Jordan’s childhood illustrations and drawings, ‘War, Astronaut, Death…’ is the first book published under his own independent publishing company, Jordan, jordan Édition. But if you’re expecting the orthodox idyllic scene of a village – matchstick house, paddy field, the sun rising between the cleavage of two mountains and birds in the form of the slanted number 3 – then you’re sorely wrong.

Flip through the pages and you’ll find that the book is bedecked with violence. As the title suggests, a variety of characters populate the book. There are astronauts, Roman soldiers and childhood cartoon characters like Felix the Cat and Waldo. In every page, violence manifests itself in various forms – mutilations, explosions, wars and so on. It’s like a child version of Hieronymus Bosch’s The Garden of Earthly Delights. Depending on how you perceive it, the drawings filter life’s realities through the wild imagination of a young kid. Either that or it’s an alarm call for serial murder in the making.

Those who are familiar with Jordan will know that violence plays a huge part in his works. “As long as it’s only a fantasy, I think it should be okay. And it’s fun!” he laughs. “I don’t know if this argument is right or not, but if you let children explore fantasy violence in context, I think it’s okay. But do not implement it in real life. That’s it.”

“Can you imagine my grandparents’ house was filled with drawings of Nazis?”

Such explanation would probably horrify most modern parents who pick up self-help books on how to raise their child free from the horrors of the world – a utopian childhood devoid of violence and sex. Luckily, there’s no petition from angry parents to take down his book. If anything, it was met with a positive response. “It’s the first time that I’ve created something that is accepted by people from different backgrounds. The narrative that I’m trying to bring across is uncomplicated, although I usually turn away from creating something so straight-forward. So even though I’m not lowering down the bar, my audience can understand it still. So I think it’s great,” he says.

The takeaway from the book is simple: a child should be free to exercise their creative freedom. I ask if his parents were ever worried. “Worry? Never. They know I watch R-rated films and violence stuff. After looking at my drawings, they’re like ‘Oh, you’re done!’ and that’s it. They just keep it and save it,” he recalls.

So they never comment on his drawings? “Even though there are people getting chopped into pieces, they just save the drawings. I don’t know if they have a judgement towards the quality of the drawing but they are happy that I’m being productive, I guess.” Not only his parents were supportive of his creative pursuits, but his maternal grandparents were equally encouraging. “My grandpa was an accountant, so he gave me a lot of papers to draw on. I remember watching Indiana Jones and was so into Nazi that I drew a lot of Nazi soldiers. Can you imagine my grandparents’ house was filled with drawings of Nazis? I’ve always been into World War since young,” he chuckles. Of course, young Jordan was too young to comprehend his subject of fascination back then.

While Jordan has been drawing since he was young, it was his interest in filmmaking and the exposure to the internet in the late 90s that opened up the door to the career path that he’s currently on. “There’s this software called 3D Movie Maker by Microsoft. Here you can make a film and it’s very easy to use like Microsoft Word. So I began to create my website when I was in primary school,” he continues. “Before Adobe, there’s Corel, some sort of Photo-Paint or something. I learned graphic design through that as well as the aesthetic needed to make a good website.”

“My mom’s cool but still on the conservative level. A kind of freedom in moderation.”

At this point, we digress to an interesting fact of his life where he once had a penpal from Australia where they often exchanged the films that they created. “We had a good relationship until he sent me this ‘naughty film’,” he says with a laugh. “My mom was right beside me and she just laughed it off. She’s very open-minded about it.”

After graduating with a diploma from Lasalle College Jakarta in 2005, Jordan went on to be a full-time graphic designer at LeBoYe, one of the most respected graphic design firms in Indonesia, where he stayed for a year. Still, having been free to exercise his creative freedom since young, Jordan admits he was shocked by the reality. “I think it’s very common when you start working and you have to think about others. So, less ego. I think that’s the hardest thing. So it was definitely a shock,” he says.

Is compromising something easy for him? “Oh no, compromising is a joke for me,” he dismisses. Jordan leans back and it was only then that I realised a hunting rifle propped at the right side of his seat. It made for a bizarre yet amusing moment as if he was making a subliminal point (Jordan later explains that it was a gift and the gun is not loaded). “I don’t want to create something that I’m not proud of. Because I did that several times and I never share the work because it’s bad. And I don’t want to do that [again] in the future. So no compromise.”

In 2013, Jordan left Jakarta to study Visual Communication in FHNW HGK in Basel, Swiss. He likens the experience to learning kung fu from a martial arts master in China. There’s no mercy. “I was pressured by this teacher because I was seen as coming all the way from Indonesia with nothing to show. So I tried to figure out what I’m lacking compared to other students,” Jordan recalls. Thus, Jordan observed how they worked and learned to implement contexts in his works. “They need context. They need process. They don’t like it when you create something from Pinterest.”

“You can play, but there has to be rules. You can break the rules as long as you know the rules.”

His time in Basel also influenced his teaching style, now that he’s a fashion business lecturer in Lasalle College Jakarta. “I tell it as it is to them. At the same time, I also try to broaden their minds, encourage them to listen to podcasts, watch documentaries. I won’t demand them to come to class on time. All I ask is that they devote themselves at class,” he says. I’m curious if he gives his students the same freedom that was afforded to him as a child. “Yeah, I give them the freedom to explore. But, their freedom has to be structured. You can play, but there have to be rules. You can break the rules as long as you know the rules.”

While Jordan is known to be a graphic designer and filmmaker, he’s also well-known as the founder of The Balletcats, a label that he founded along with his wife Fatriana Zukhra that pays homage to felines – all of the collections are inspired by the behaviours of cats. I tell him that I didn’t see any drawings of cats in his book, so his fondness for the species must have developed much later in life. “I was very ignorant about animals. But a cat once gave birth to a litter in front of our house and the kittens didn’t survive. It was then that I developed feelings for animals. I think from cats, you realise that all animals matter. Of course, dogs too, and even rats for me,” he explains.

After all the conversations that dove from violence, sex to cats, my mind keeps returning to a particular character in his book, J-Maxx. The latter is a gun-trotting muscular man with sunglasses and spiky hair, an alter ego that combined all the ideal western qualities of masculinity we often see on the big screen as a child. I ask if J-Maxx is still with him to this day or at least the “armour” that he puts on to overcome certain situations.

“I think I’m pretty much more confident right now compared to back then. You don’t need muscles, you just need a brain. I don’t know if this brain [of mine] is enough, but I can say that I don’t need J-Maxx anymore. I can say goodbye to J-Maxx now.”