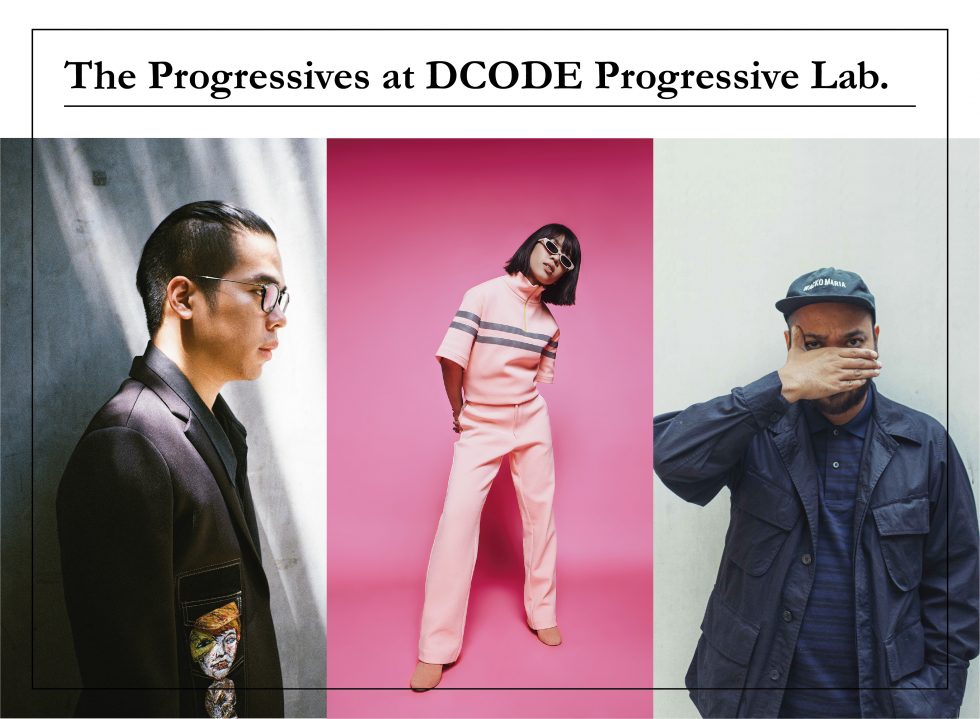 by Erdira Wirengjurit
Share
For its first time, DCODE Progressive Lab is gathering a round up of creatives of the music, fashion and art scenes for an upcoming day-long event.

For its first time, DCODE Progressive Lab gathers creatives to shed and share about the inner workings of the industry. A melting-pot of industry makers, from art, music and fashion, will animate the day-long event where attendees can participate in discussions and workshops to fulfill their creative hunger. This first DCODE Progressive Lab is bracing to show the rarely seen side of creation. To uncover the behind-the-scenes of a production, the REVERSE Fashion Show will feature Patrick Owen‘s archived collection modeled beyond the runway as the audience will see the backstage happenings too. As the show is on the move, the beat of walk will be conquered by rapper RAMENGVRL who will perform alongside. Visual artist DARBOTZ will make an appearance for one of the three workshops where he will share the artistic skills that propelled him to be one of Indonesia’s most recognisable street artists. This line up of events is only the tip of the iceberg: as the event rolls into the night, Laidthisnite, Diskoria and Anton Wirjono will liven up the stage at Progressive Lab for more music and dancing.

DCODE Progressive Lab will be held a Livespace SCBD on Saturday 24th August starting 5pm. The event is FREE of charge and attendees must register to secure their spot at the event. But before the event, it’s a good idea to get acquainted with three figures you will meet at DCODE Progressive Lab.

Patrick Owen is a fashion designer with an eponymous label for both women and menswear. He has shown his collection in Tokyo Fashion Week  and often combines unisex quality in his curations.

Can you tell us about the collection that will be showcased at Progressive Lab REVERSE Fashion Show?

It will be a ‘REVERSED’/retrospect sequence, with 15 models parading in our archive pieces. The objective of this showcase is aligned in a literal way with the theme given by DCODE.

How would you describe this collection in three words?

What advice would you give to young fashion designers starting their own label?

I don’t want to impose any advice on anyone. I would, however, encourage them to do whatever it takes to convey their own messages and shut all noises surrounding them. Everything else is ultimately unimportant.

And for you, what is the hardest struggle in preparing a runway show?

When you are forced to be on the edge, there’s always a path and its own set of consequences attached to your choice at that particular time. Just be rational and creative in solving problems and get on to another set of problems. After a while, the big picture will surface, sooner or later.

RAMENGVRL is known for spitting rhymes that encourage women to be confident and be her own person over conforming to rules and expectations. She’s famous for her breakout single, I’m Da Man in 2017.

How are you getting ready for the Progressive Lab REVERSE Fashion Show? How’s the setlist?

Just know that my performance for the fashion show will involve some of my new songs and previous hits. It’s gonna be lit.

How would you describe your fashion style? Do you have a signature item?

I go for “Look at me please!” [laughs] I like to pair my outfits with chain accessories and dope shoes to go along [my outfit].

How is it being a female rapper here when there’s only a few to look up to?

Well, that just means that I’ve got to be the best version of myself and kill it.

What’s an achievement that you personally feel very proud of?

Having artists from outside of Indonesia know about me, follow me and say that they enjoy my music are achievements in itself. To know that my work transcends borders and speaks to that many people is really some thing else.

Who is someone, local or international, that you look up to as a musician?

What’s your advice for young girls who look up to you as a female rapper?

Just do you and don’t think too much about what other people have to say about you.

Darbotz  is a mysterious figure, but his artworks are easily the most recognisable ones in Jakarta’s street art. In one of his recent works, he drew an entire mural at the MRT Station in Dukuh Atas. Whether he will expose his full face during the event is up to anyone’s guess.

How did you get into street art in the first place?

In high school, I really got into doodling, gang culture and spray paints.

What’s very special about it that you choose it as a medium of expression?

I love the adrenaline. the smell of the spray paint fume and the sounds of the street happening all at once.

Among your recent projects, can you talk bit about one that you are particularly excited about?

My latest one is an installation in Pacific Place. I’m really excited because it’s 3D, the biggest one I’ve created so far and the centre piece of the exhibition.

What will you be teaching at your workshop for Progressive Lab and what can we look forward to?

I will share my story, how I started this career to be where I am today. And I’ll tell about how I did it and how to do it. Plus, my workshop students will have a chance to receive some of my original artworks.

What do you think of the street art scene in Jakarta?

I need to see more of the REAL street art in Jakarta, actually on the streets.