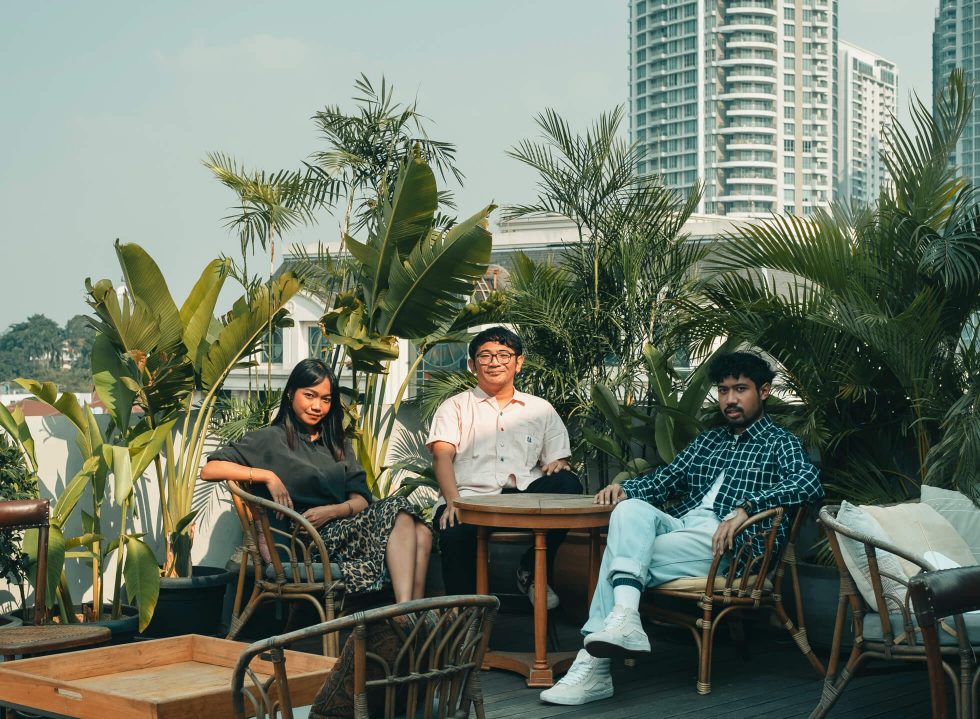 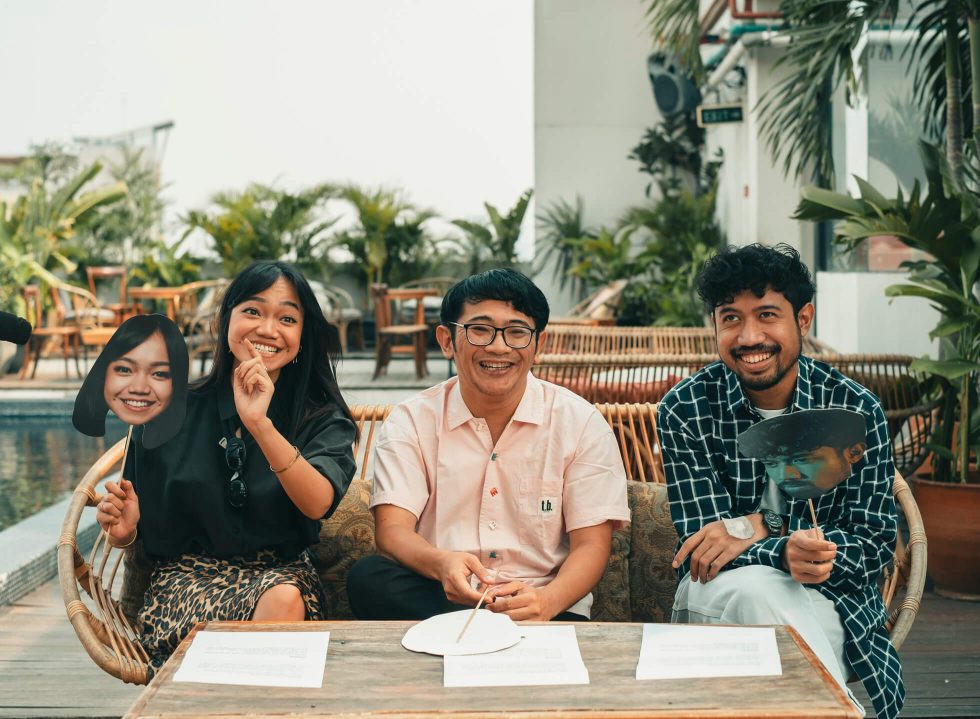 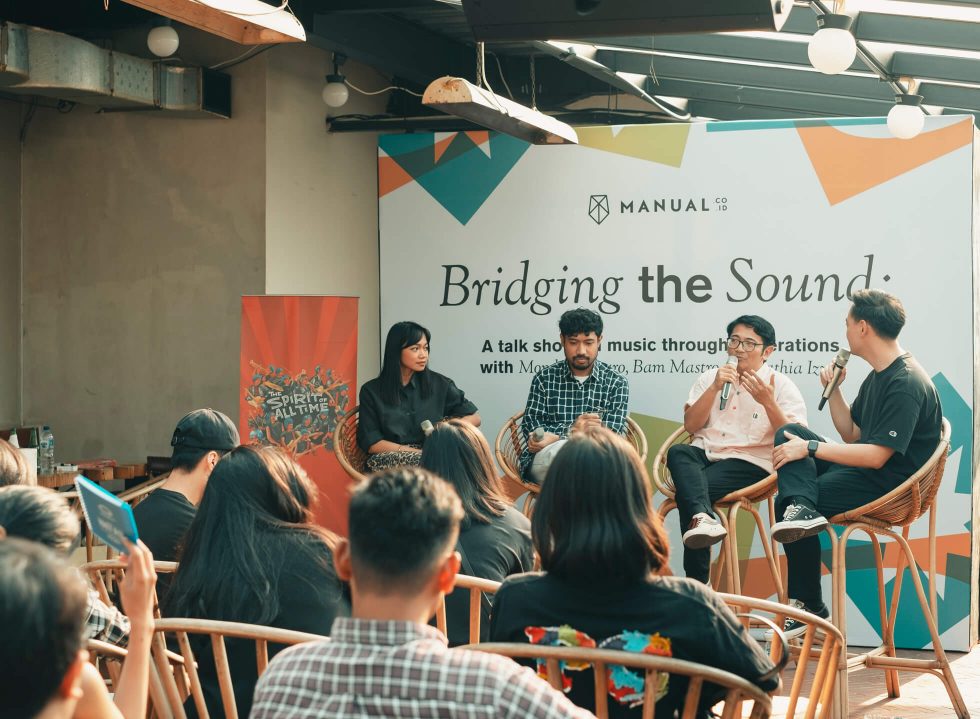 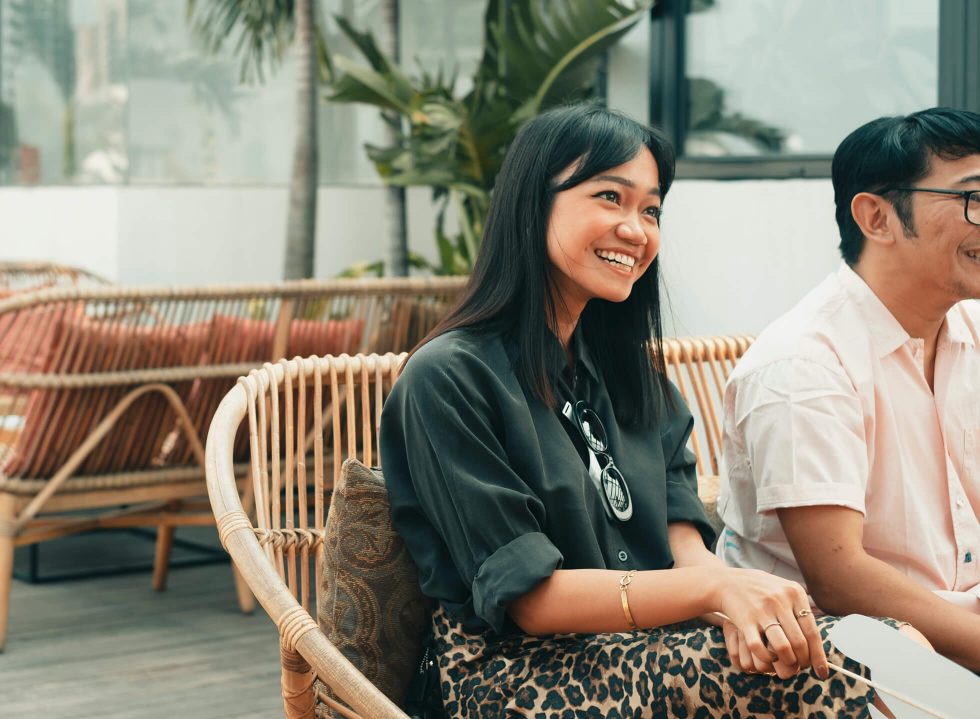 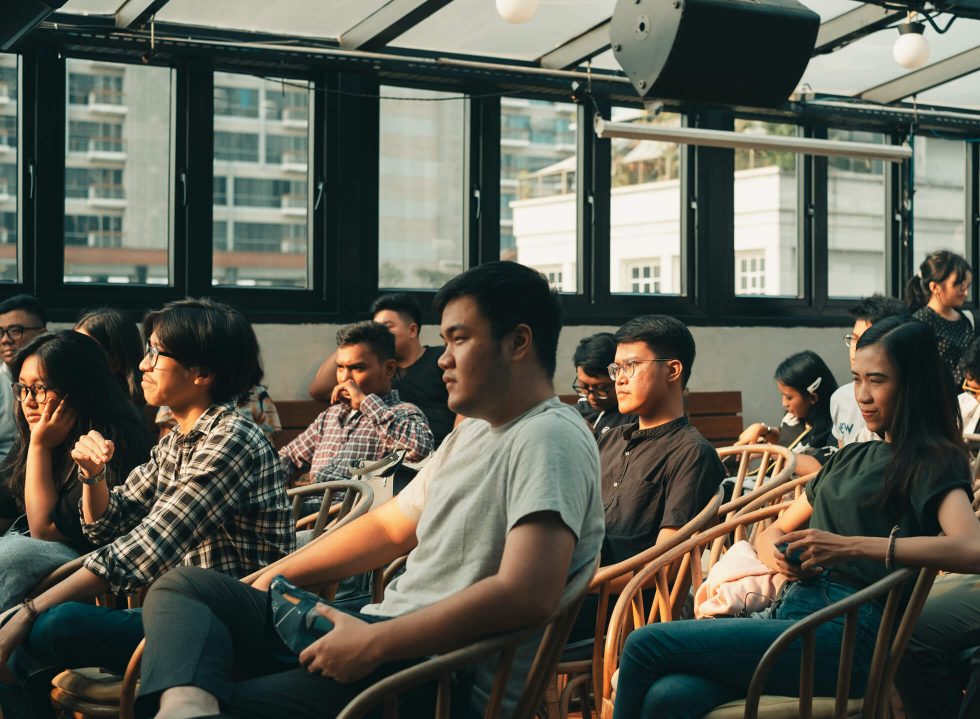 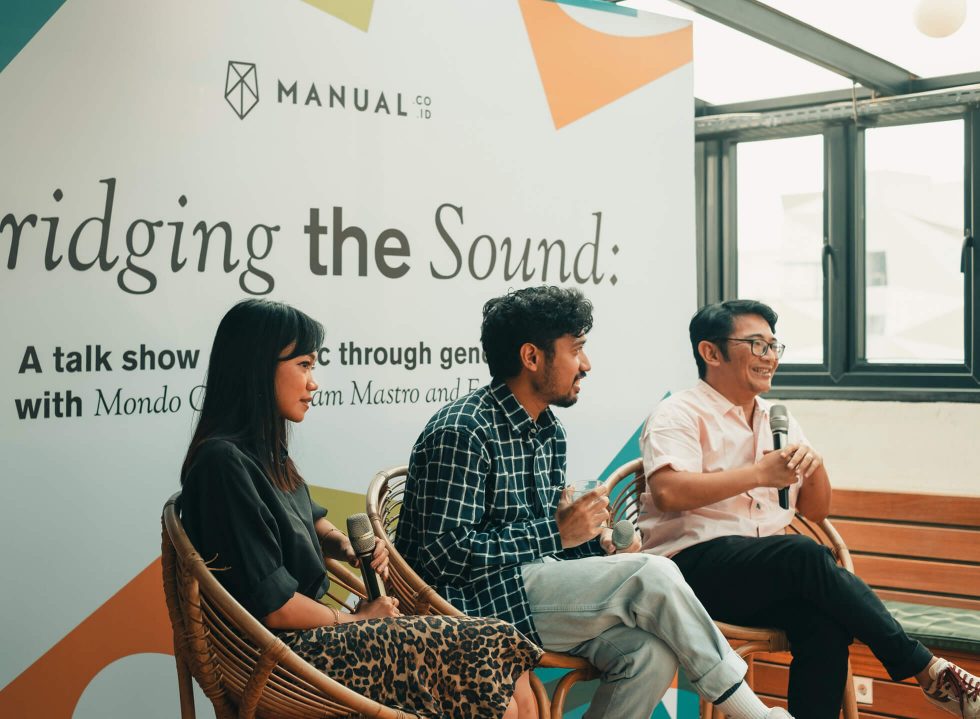 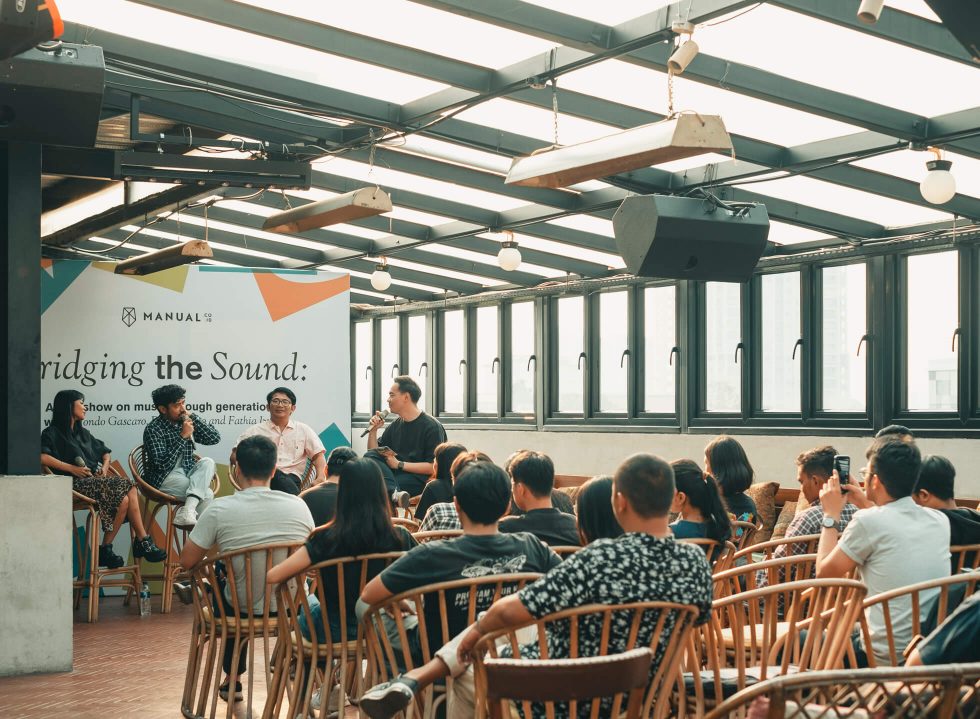 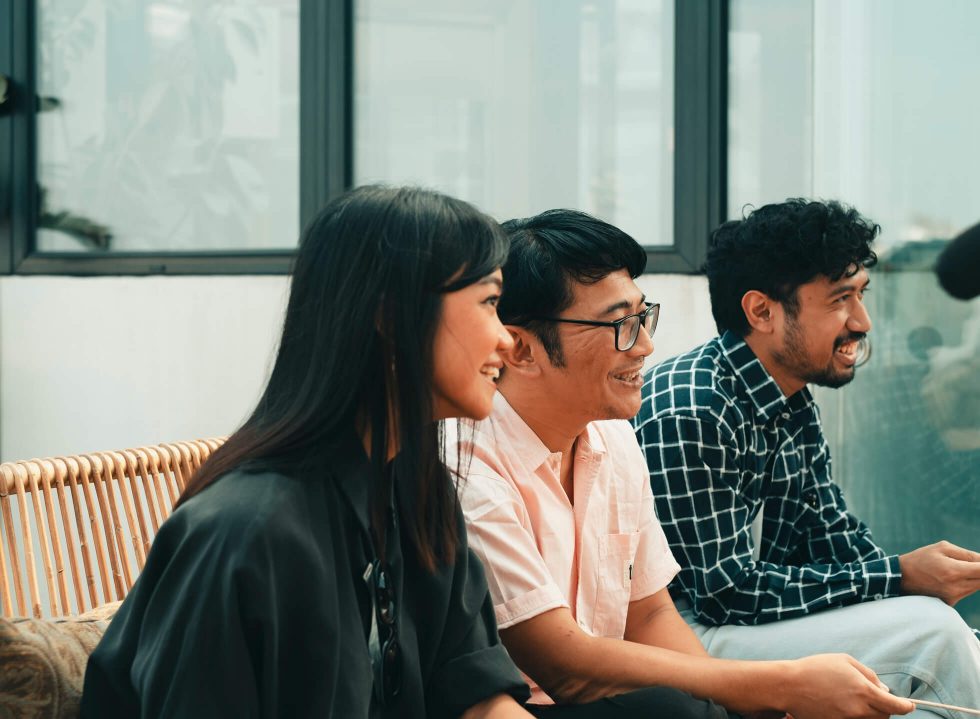 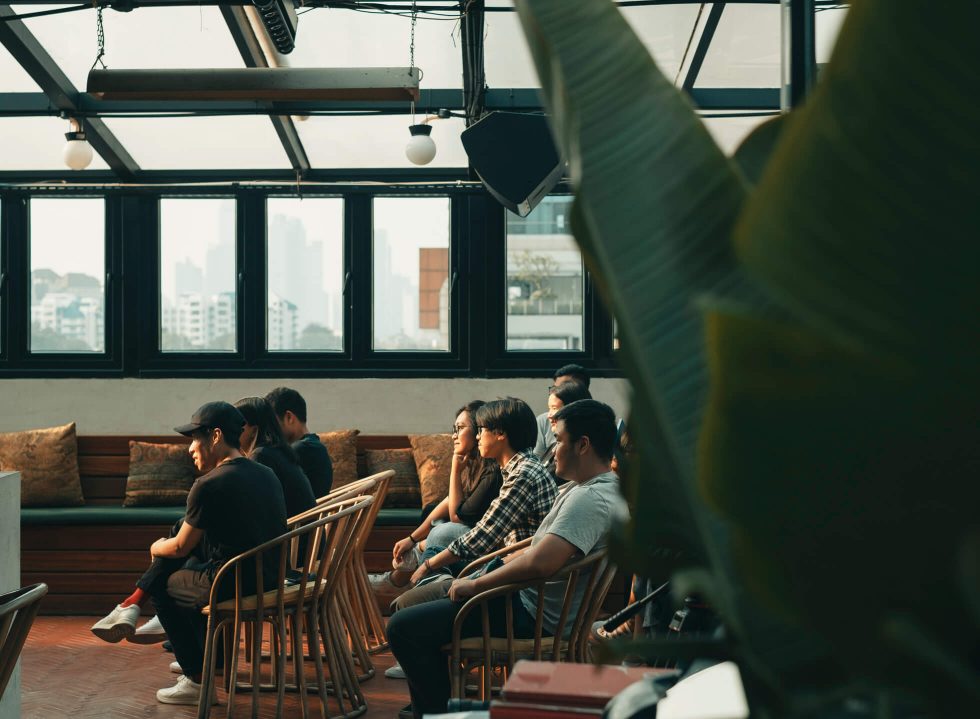 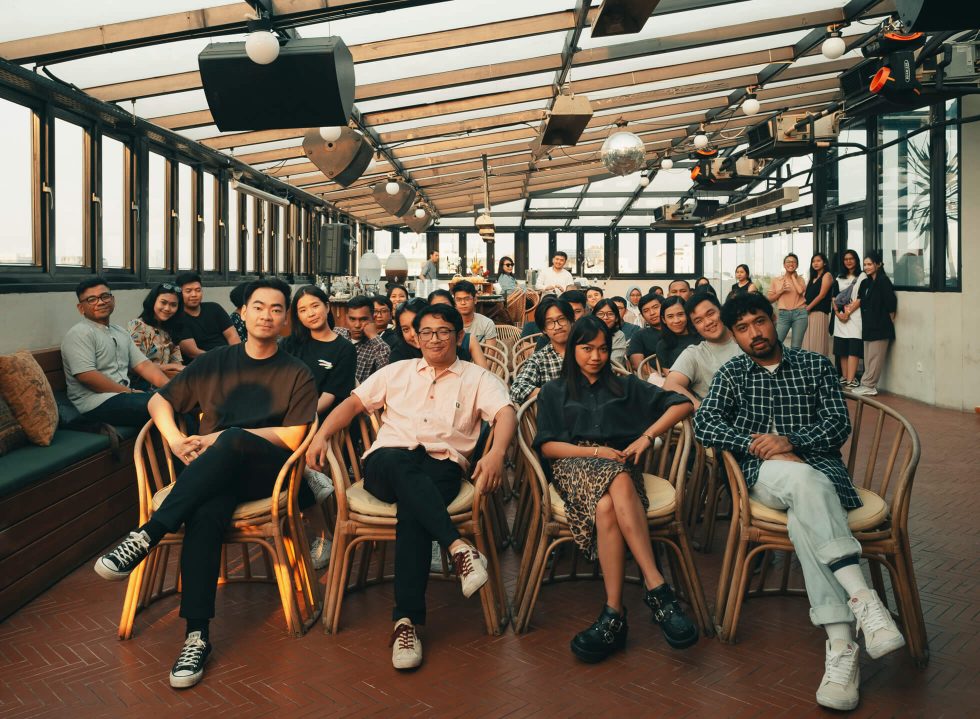 by Erdira WIrengjurit
Share
In spirit of festival season, Manual Jakarta spent the day with Mondo Gascaro, Bam Mastro of Elephant Kind and Fathia Izzati of Reality for Bridging the Sound to kick-off Soundrenaline 2019. Here, the three musicians from three different eras share how they heed to their musical influences in this career.

When festival season is underway, music lovers gather to enjoy the series of concerts and festivities that get everyone pumped up. The crowds cheer for their favourite headliner and the party goes on. Lest we forget, getting to know your favourite artist is another way to celebrate festival season and recognise their grit within the industry. While performing artists make it happen for the rest of us, learning their bit of stories is a fair exchange as we get to know them just a little more.

Amidst the busy schedule of touring for festival season, three musicians; Mondo Gascaro, Bam Mastro of Elephant Kind and Fathia Izzati of Reality Club spent an eventful day for Bridging the Sound with Manual Jakarta, last Sunday. The three musicians of three different eras talked about the music that speaks to them from the pre-beginning of their musical careers and inspirations across the generations.

Their next live performance is coming up at Soundrenaline 2019, scheduled in Bali for a weekend long of music. In line with the festival’s theme, The Spirit of All time, read more as to how Mondo, Bam and Fathia heed to their musical influences in this career.

Manual Jakarta (MJ): What were your earliest music memories?

Mondo Gascaro (MG): My grandmother used to play the piano at home and she played Indonesian oldies. So, my first recollection are songs by Ismail Marzuki, Bengawan Solo, those kinds. And because my father liked to sing and owned a karaoke bar close to our house, there was always music and musicians around. My dad would sing, usually Nat King Cole, Frank Sinatra and the likes.

Fathia Izzati (FI): My earliest music memories, I remember when my mama and I dig the big CD (laser disc), I remember playing the laser disc of Air Supply.

MJ: Do you have one musician you consider to be the biggest influence growing up?

MG: When it comes to musical influence, there’s many of them–even to this day. But the most impactful one would be The Beatles. I listened to them for the first time a long time ago. The Beatles was also the very first album I have ever owned, Sgt. Pepper’s Lonely Hearts Club Band. After I listened to that one, I think it was like, my calling to become a musician, even though I didn’t know how to do any of that.

BM: I think Michael Jackson is probably the biggest so far. If Michael Jackson was in a band, he would probably be in Elephant Kind. But I do have other influences, like Arcade Fire, The War on Drugs, Kanye West to like Johnny Mathis, Frank Sinatra, Chilibasi.

FI: I would say The Strokes, but that was early on… does it count? And White Stripes, too!

MJ: Did they influence your mindset and your work today? Is it important to have them as reference?

MG: I think, a music reference is important because music is about technicality, knowledge, and taste being the most important. Music references are important because they will develop our taste and style. But again, there’re many references to talk about, it can be music, books, films… I watched Taxi Driver and really loved the music by Bernard Hermann and since I also work as a film composer, that ties me back to my background in the film industry.

BM: Sometimes I get a little coy and I shy away from ‘references’, simply because I don’t want people to see me as someone who steals something from other people. But people started having the wrong impression of me, so I finally publicly reference the musicians that I’m a huge fan of as my work reference. And they’re not all artists–if you know Andy Kaufman, he’s a comedian back in the 1970s and he was the main inspiration for Elephant Kind’s first album. We did a lot of trolling in our album where people were like, “Wait a minute, is my tape broken or is my phone broken?” kind of thin. I “stole” that from Andy Kaufman. We all have references and they’re important to develop our skill, but having references is like, the more subtle way of saying “I stole something.” What is originality these days anyway?

MJ: Can you talk about any upcoming gigs?

MG: I will be releasing a new single maybe within a month. The next live performance will be at Soundrenaline 2019 in Bali, I’ll be performing on the 8th. This is my third time performing there and I’m still excited because it’s Soundrenaline and it’ll in Bali. I’ll be playing with a full band and we start rehearsing very soon.

BM: This week, I’ll be playing in Soundrenaline with Elephant Kind for the fourth time. But it’s the first time where we’re going to collaborate with other artists, such as Mantra Vutura. And also, I will be playing in their set as well. I have a song with them called Moonlight. That’s two exciting things happening this weekend.

FI: For Reality Club it’s Soundrenaline, and we’re so excited! This is speaking personally, but I’ve been going to that festival four years in a row now. Three times as an audience, and last year I was like, “Dang, when will we make it there? I want to play, I want to be on stage!” This year we’re going to play there. It’s definitely one achievement unlocked. And we’re so excited because we just came up with the new album on Friday called What Do You Really Know and we are going to play almost all new songs for Soundrenaline.

Soundrenaline 2019 The Spirit of All Time music festival is happening this weekend on 7th-8th September at Garuda Wisnu Kencana in Bali. For more info, head to www.soundrenaline.id