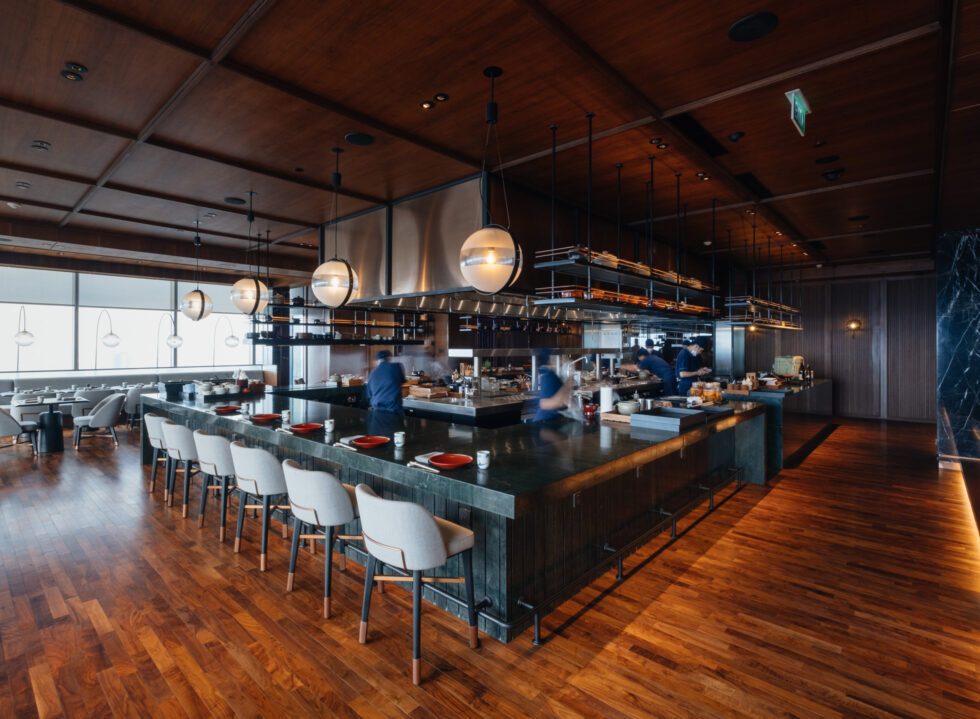 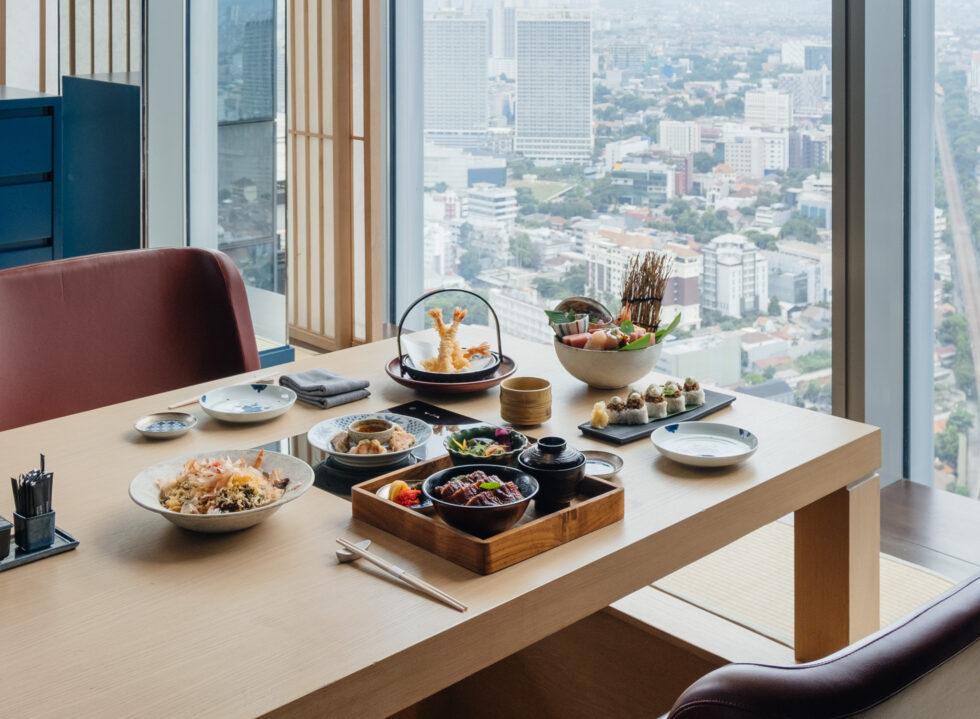 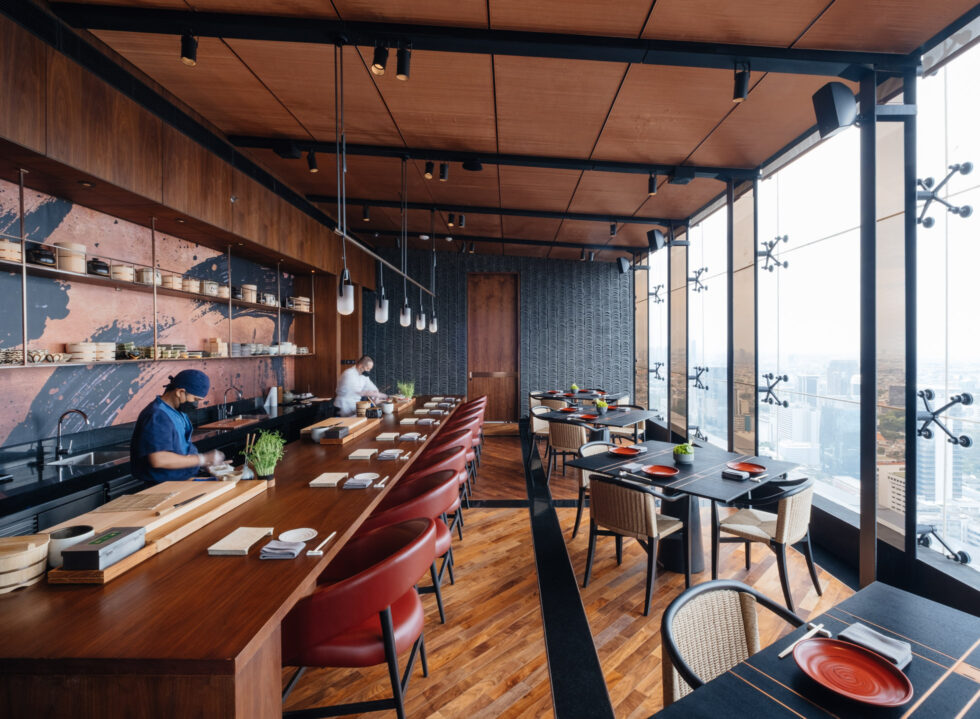 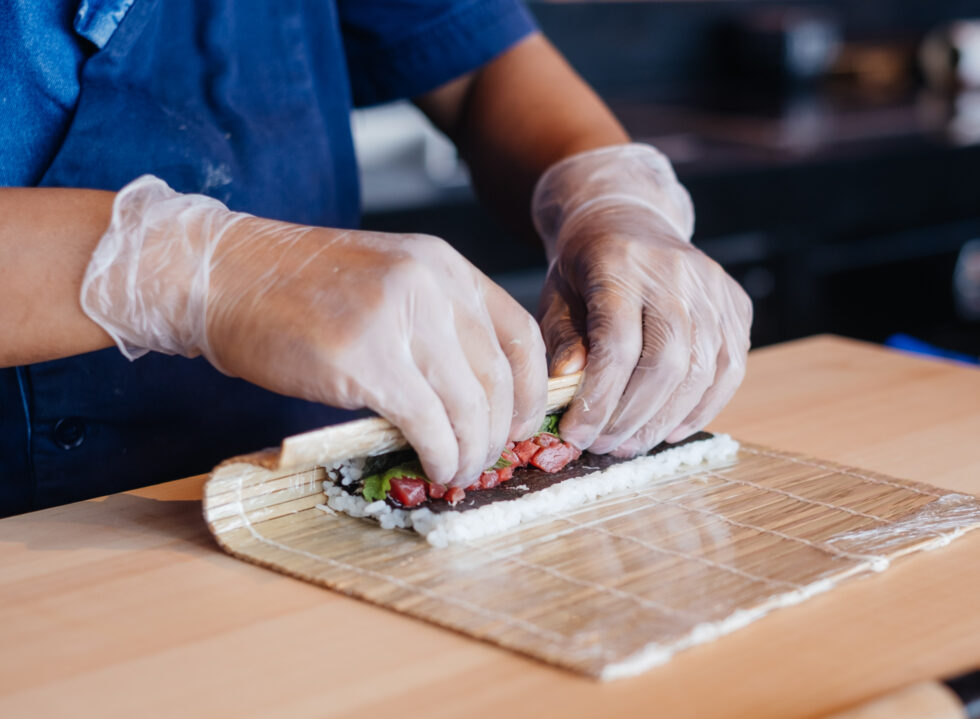 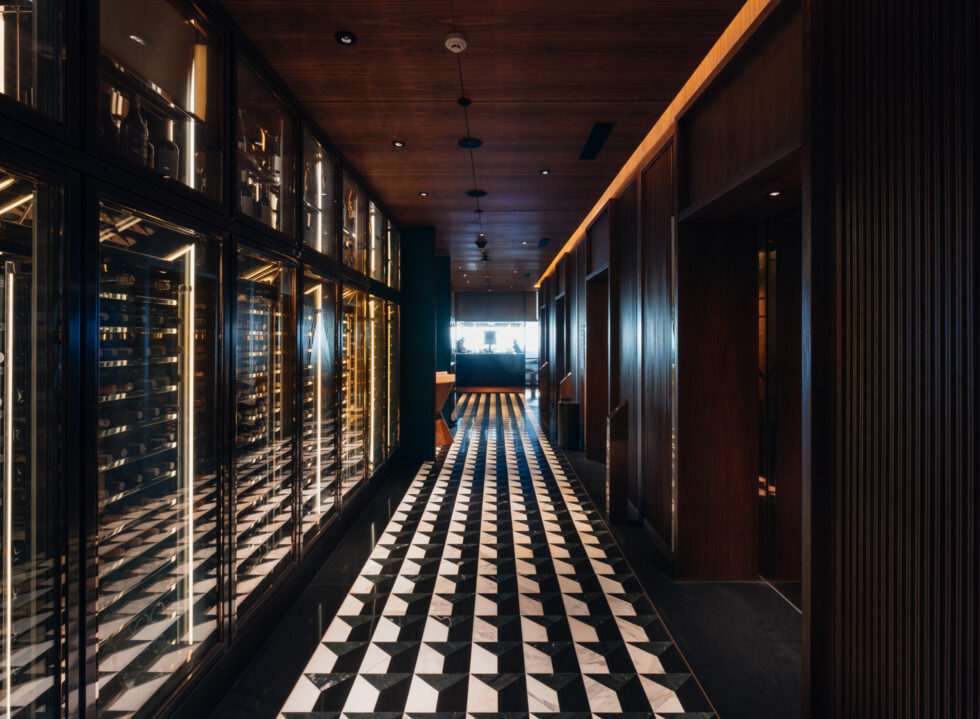 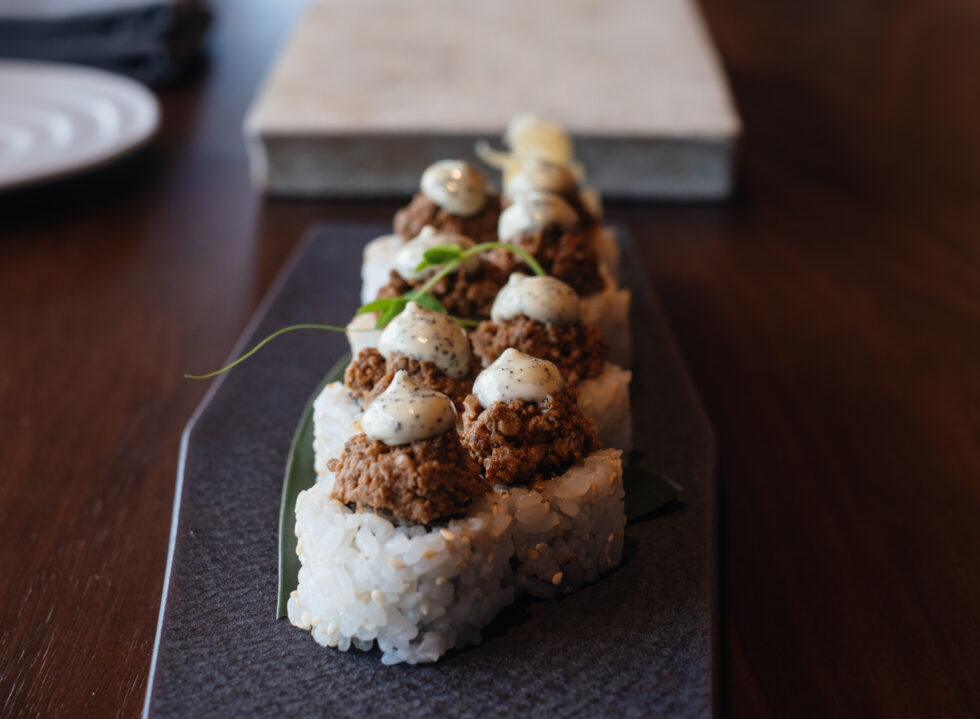 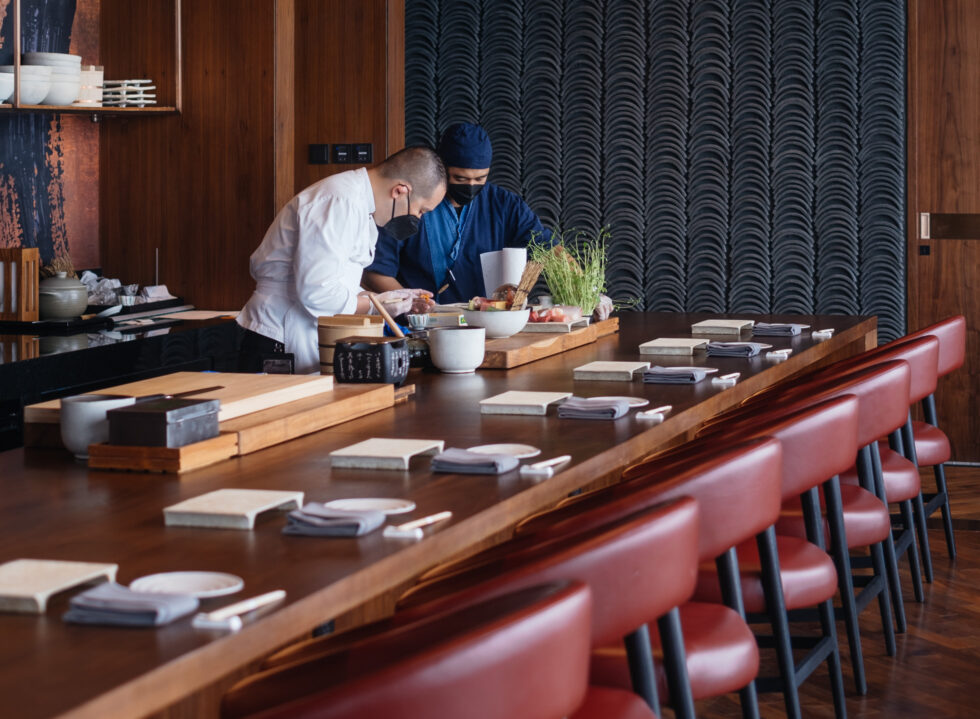 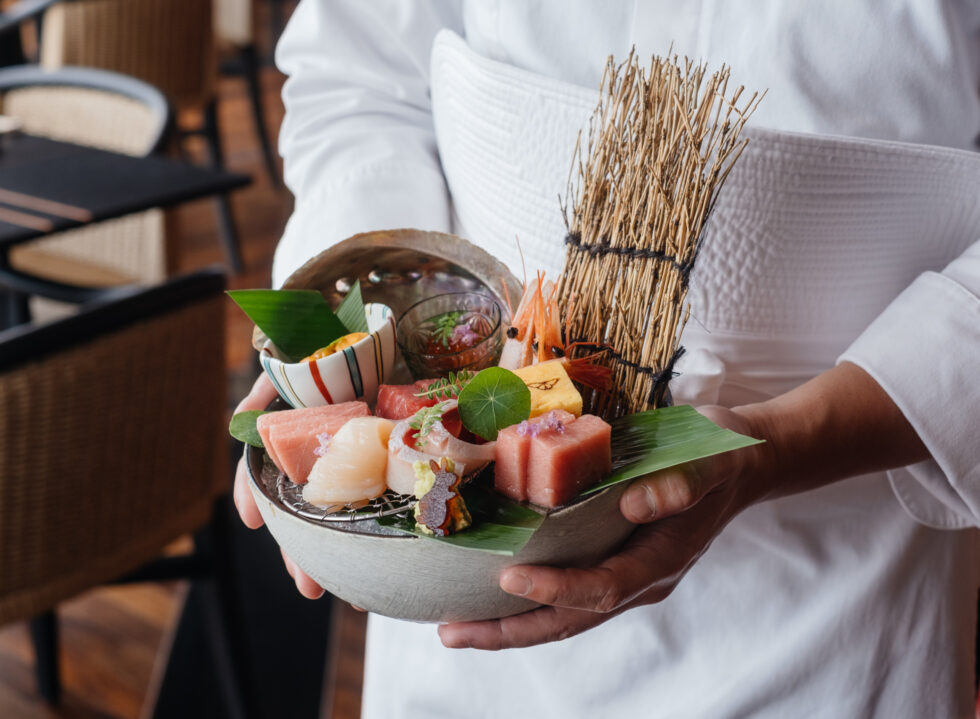 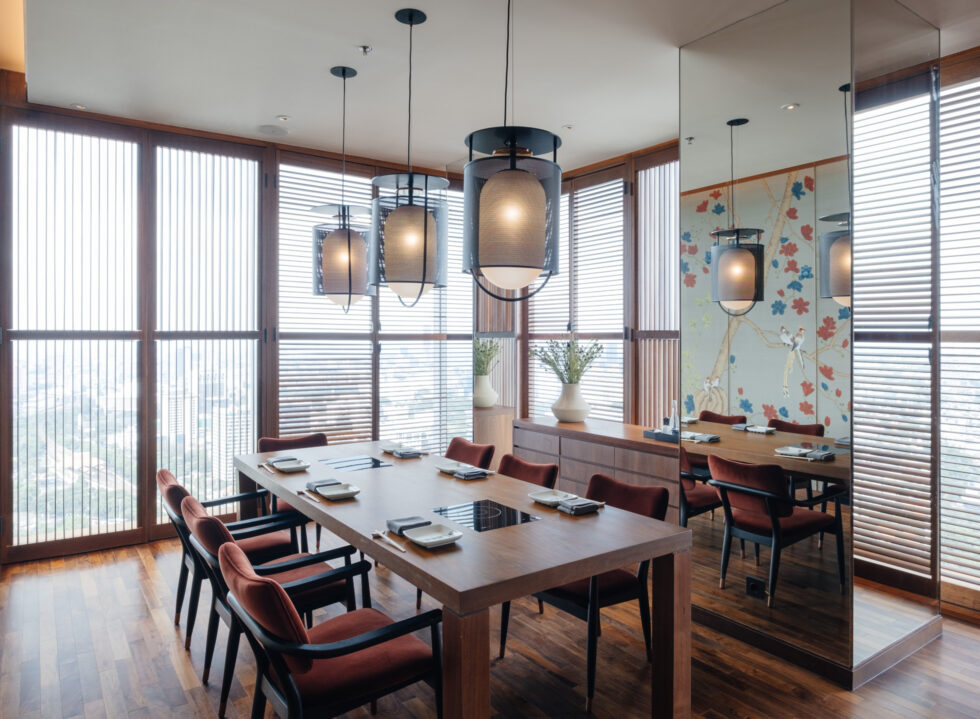 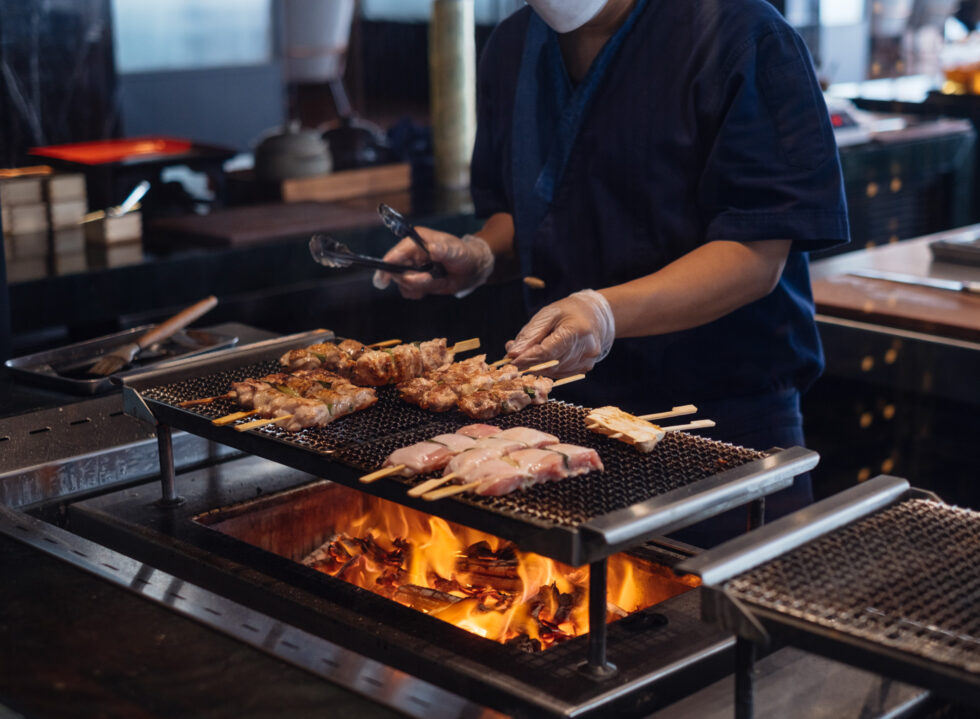 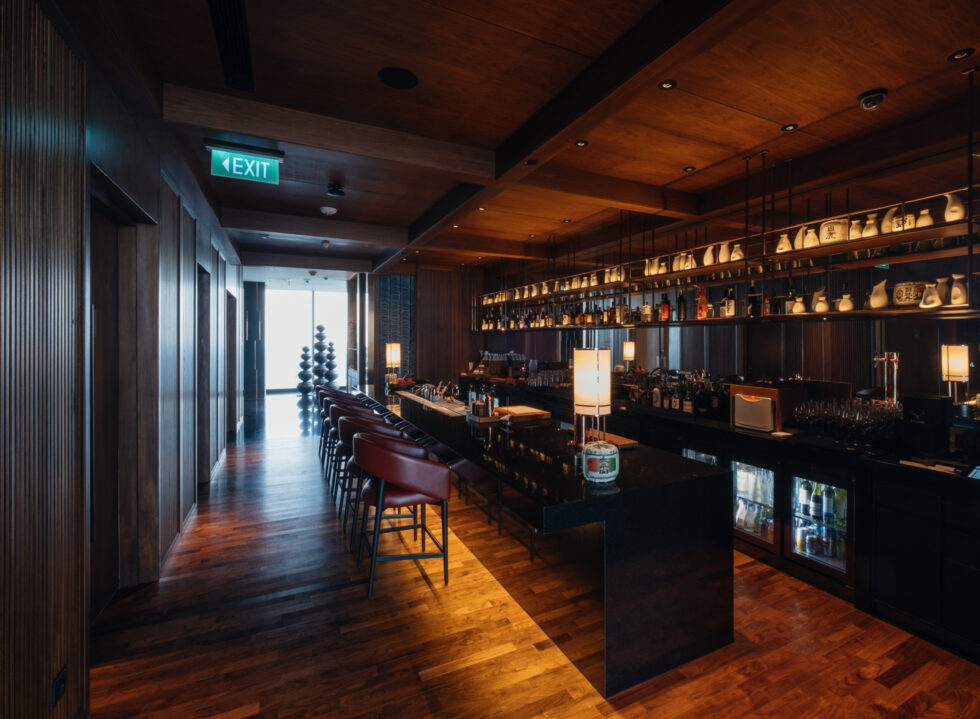 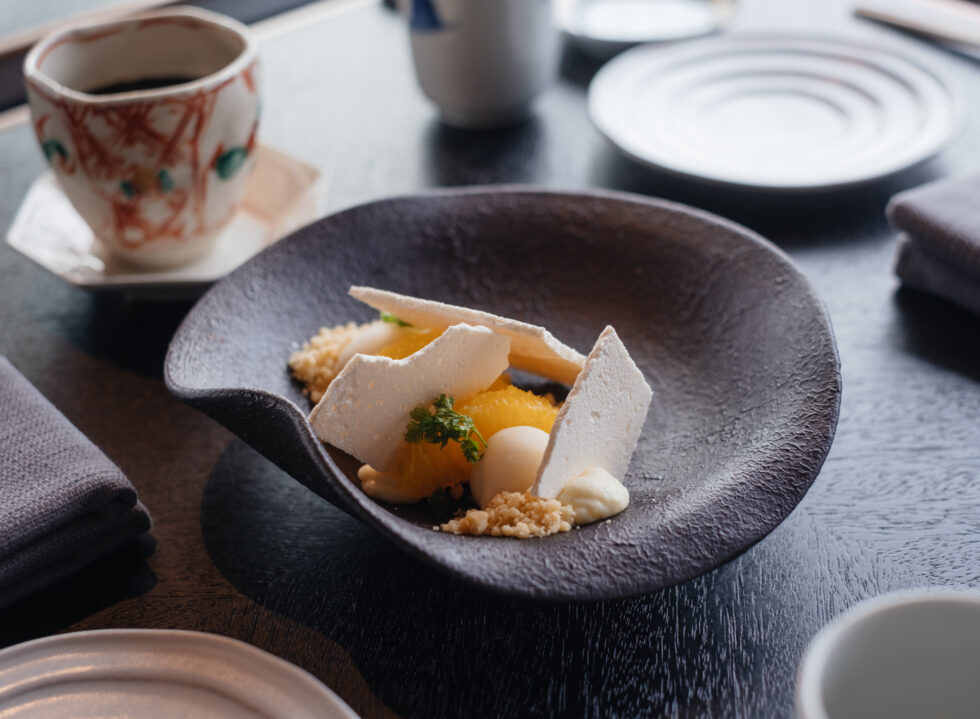 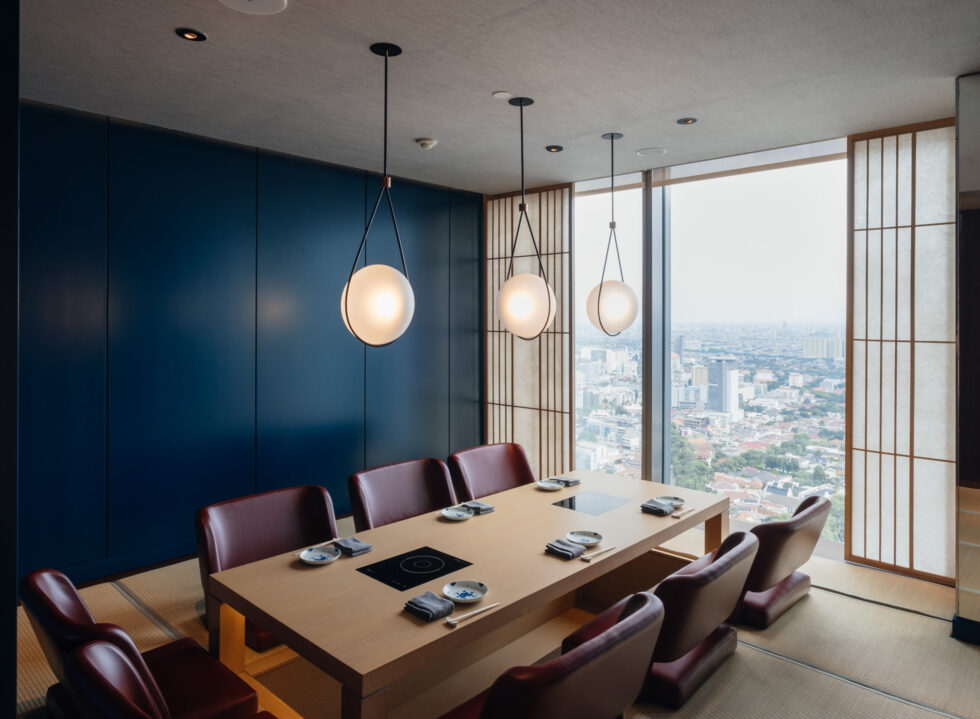 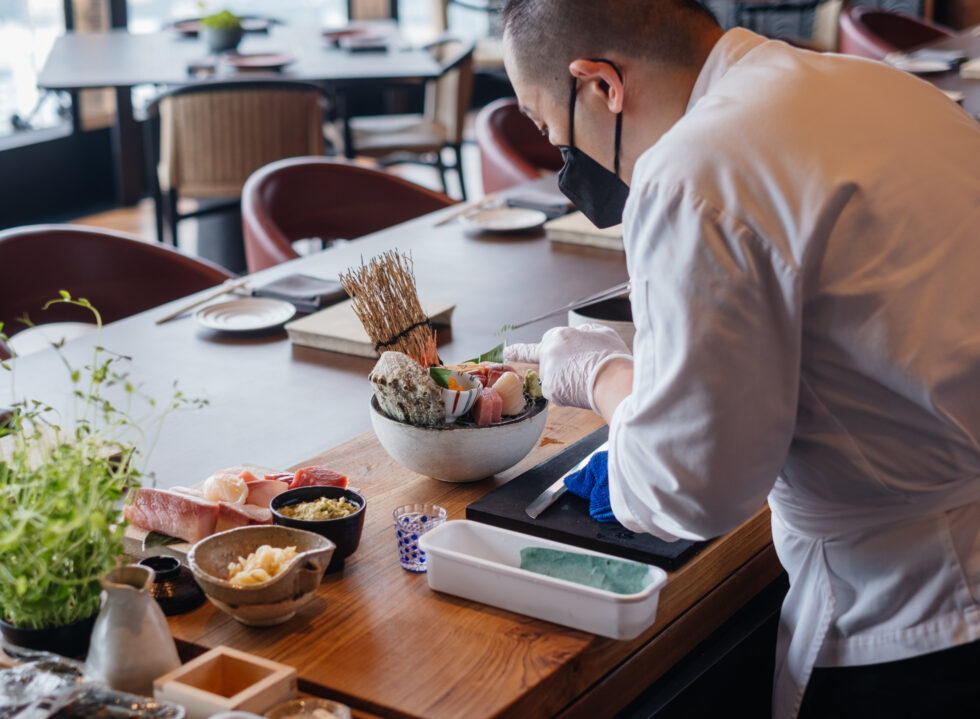 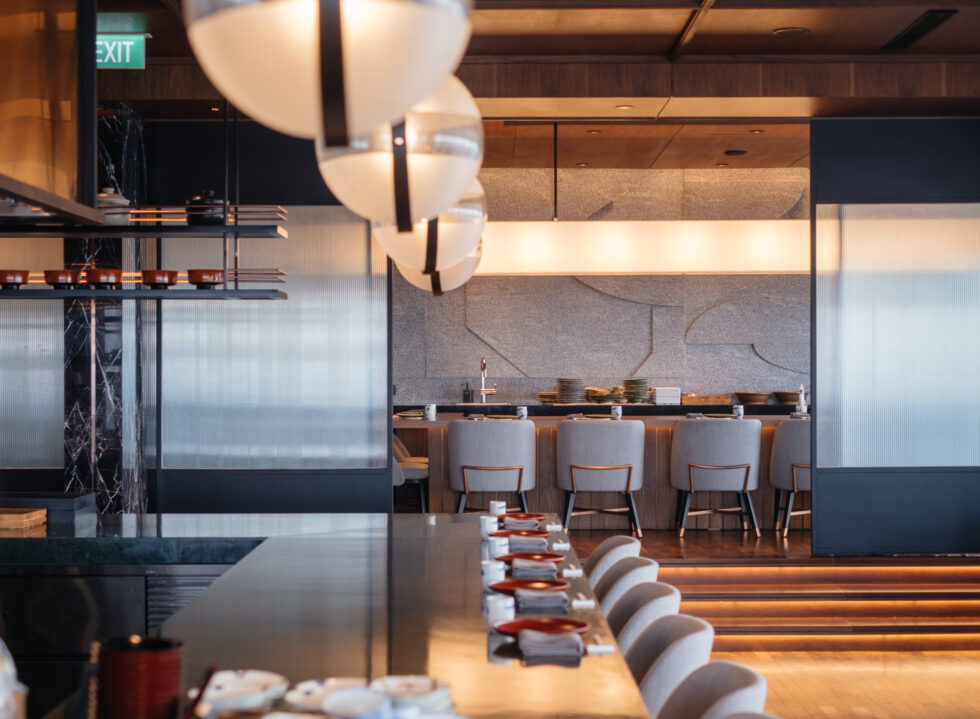 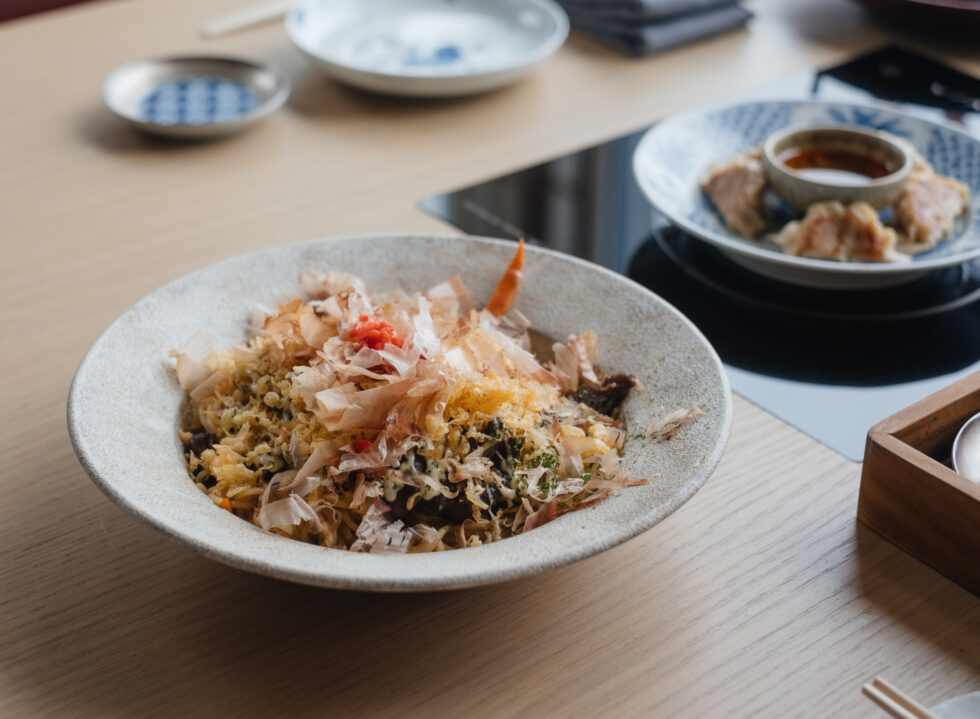 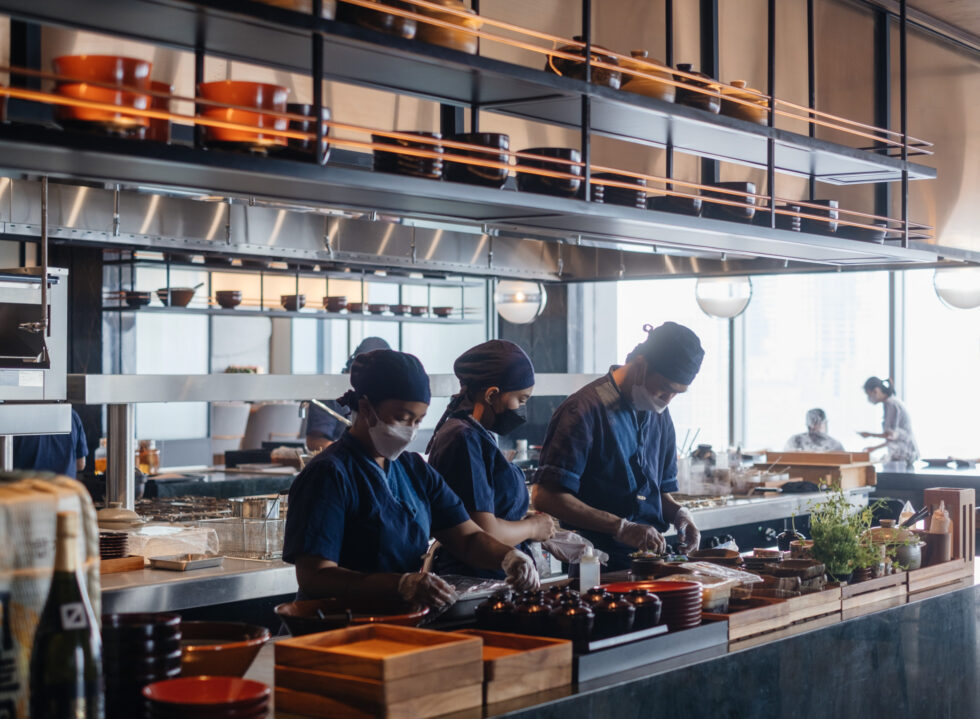 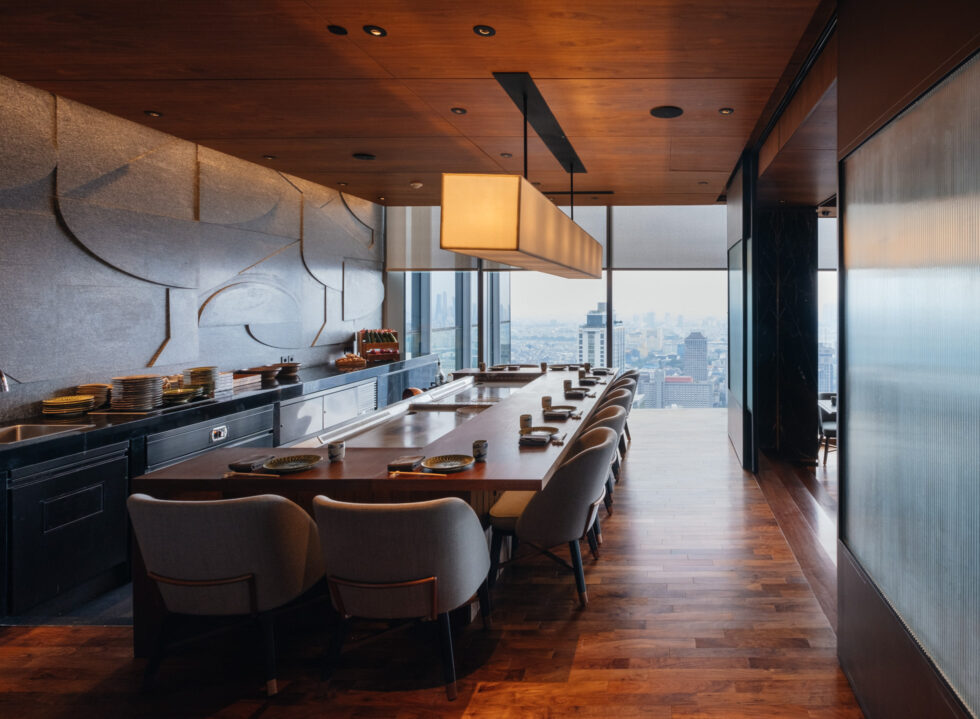 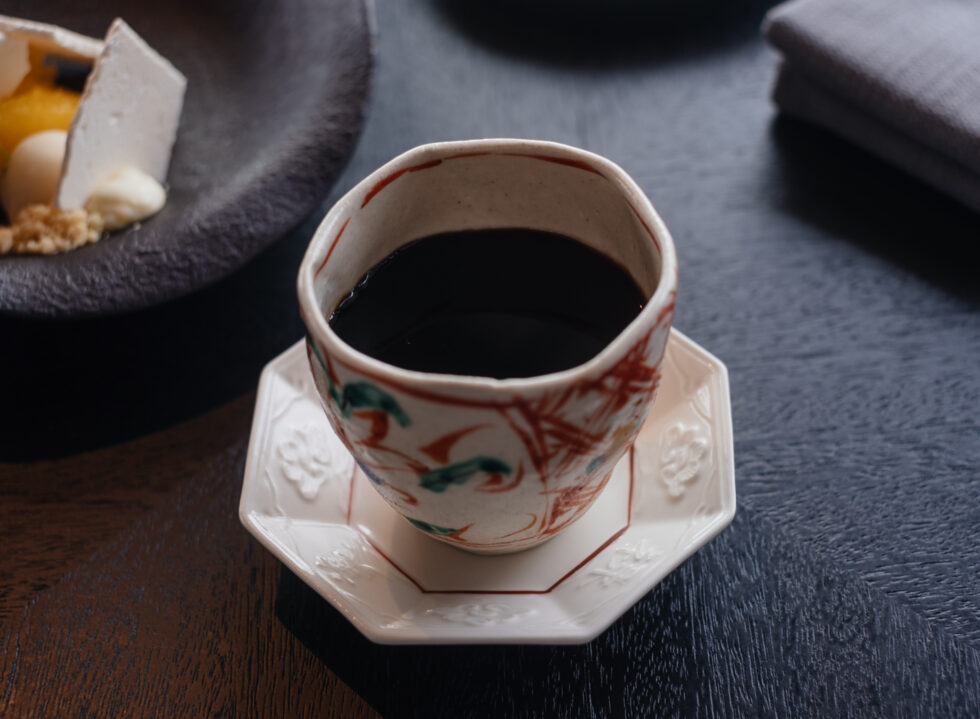 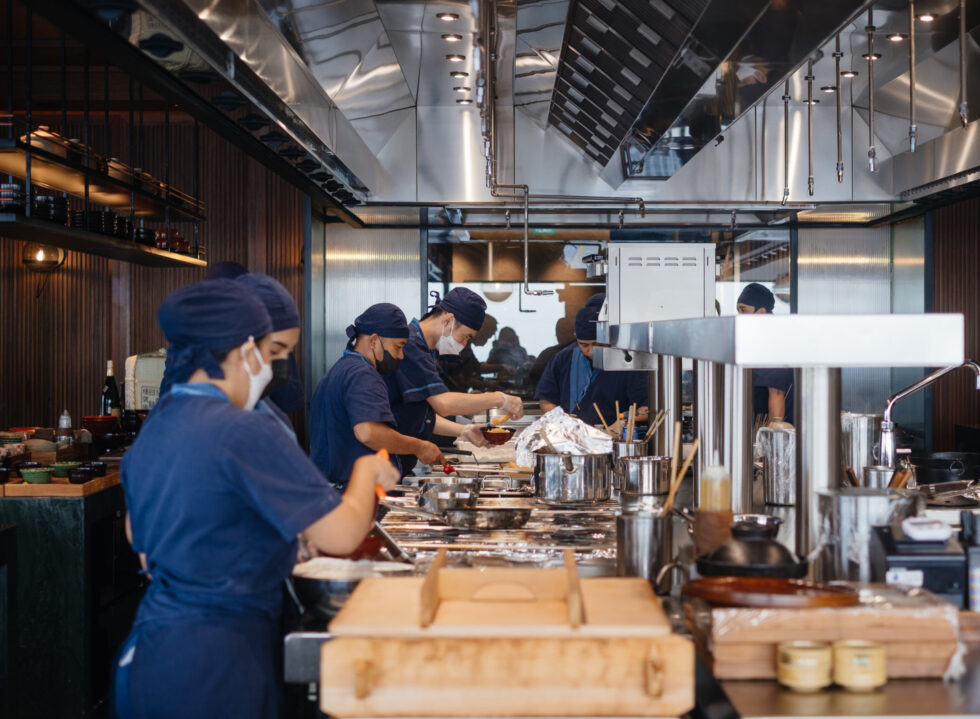 Share
From the summit of Park Hyatt Jakarta, KITA 喜多 Restaurant draws the epicureans with its wide range of modern Japanese cuisine within its expansive space that holds various private rooms and an unobstructed city view.

In Park Hyatt Jakarta on Kebon Sirih, a northern part of Menteng not far away from the city’s colonial houses and landmarks, sits a modern Japanese restaurant that spreads across the entire 37th floor. It is here that Tokyo-hailed Executive Chef Takeumi Hiraoka runs KITA Restaurant (stylised as KITA 喜多), the hotel’s latest dining establishment that encompasses a sushi and sake bar, teppanyaki kitchens, built-in shabu-shabu tables, as well as private rooms that include a tatami-style chamber.

Dim with intimate lighting, the floor opens to a cellar of wine, Japanese sake and shōchu bottles as one steps off the elevator. The main dining area with the open kitchen is neatly furnished with wooden ceilings and floors as well slabs of green marble fixtures, completed with an embracing, aerial view of the National Monument.

The opulence expressed through these settings is evidently enough to draw a particular crowd of diners from the hotel’s guests and executives from nearby offices to Japanese expatriates testing the waters. But the many sides of KITA also reveal a range of Japanese dining experiences that offer the country’s representative and popular dishes many are already familiar with.

Be it the freshly sliced salmon and other types of sashimi that are flown in twice a week from Japan; the fulfilling plate of Sautēed Beef Soba along with the popular Unagi Rice Bowl; or traditional street food like takoyaki and robatayaki that they grill in the open kitchen, KITA keeps their options well varied while keeping the “authentic flavours of modern Japanese cuisine”.

The way each dish is harmoniously presented can compete with the not-your-everyday views exposed in almost every room. A fine example is the KITA Chef’s Selected Sashimi, where slices of toro tuna belly, sake salmon, hotate scallops and other options on the list are carefully arranged on a bowl atop pandan leaves, adorned with a decorative shell and branches, and served with house-made wasabi and shoyu.

A total of nine private rooms—some are even set with their own teppan kitchen—with a range of seating capacities make KITA an ideal restaurant for gatherings and celebrations. But even amidst this nod to luxury, there’s a comforting sense that diners are eating food that they know—a credit to the global popularity of Japanese cuisine that has stretched from fine dining to street food. Just as the name in its mother language is broadly defined, KITA brings the familiar “joy” of Japanese food and dining experience to the city’s epicureans.