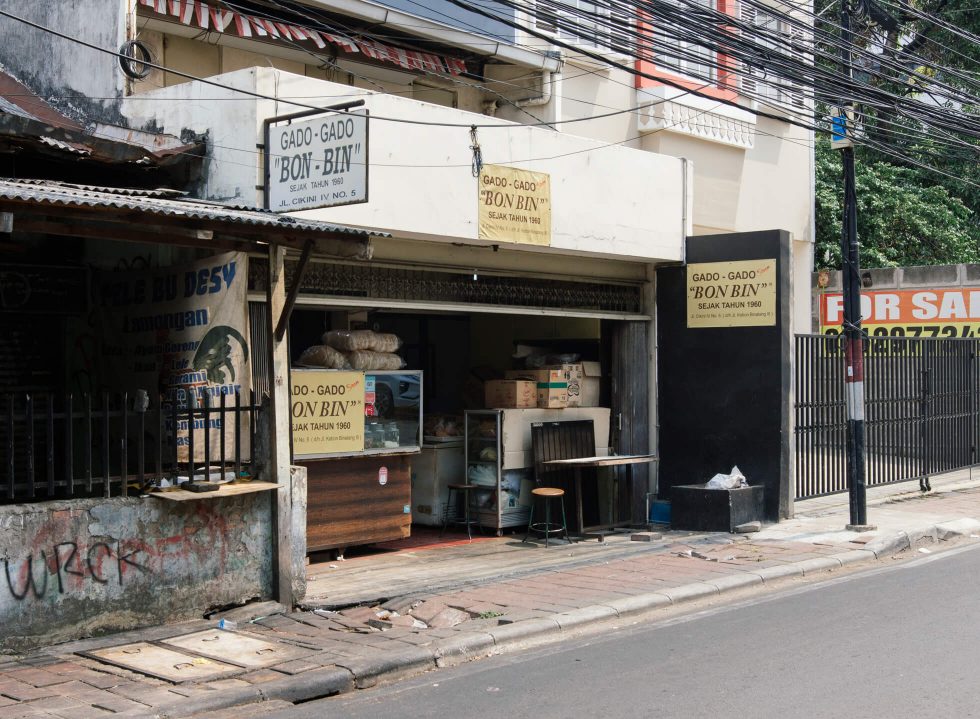 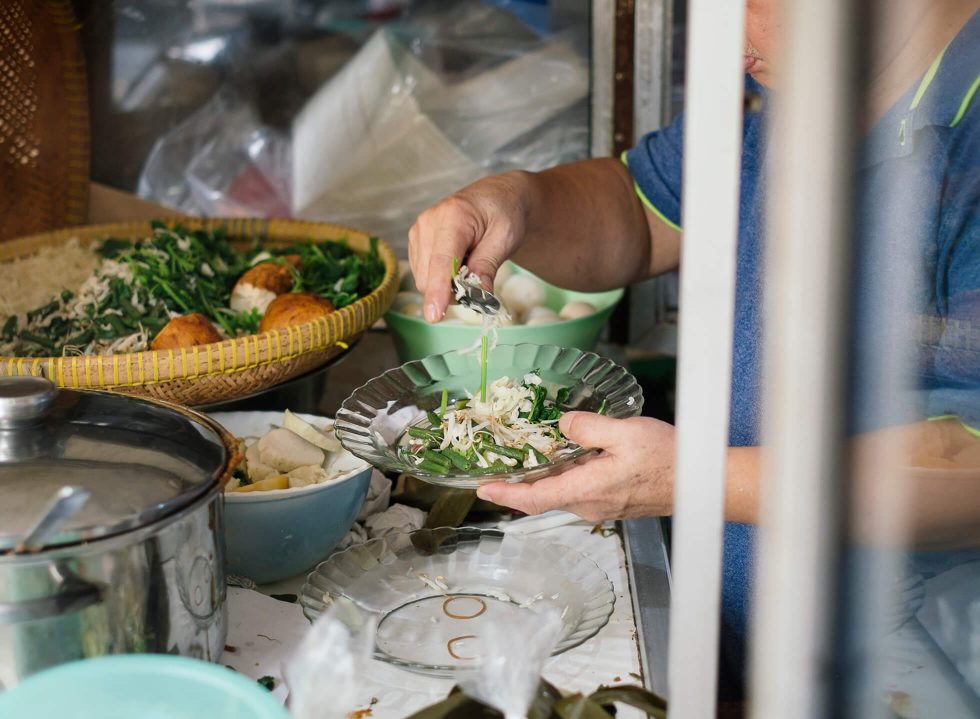 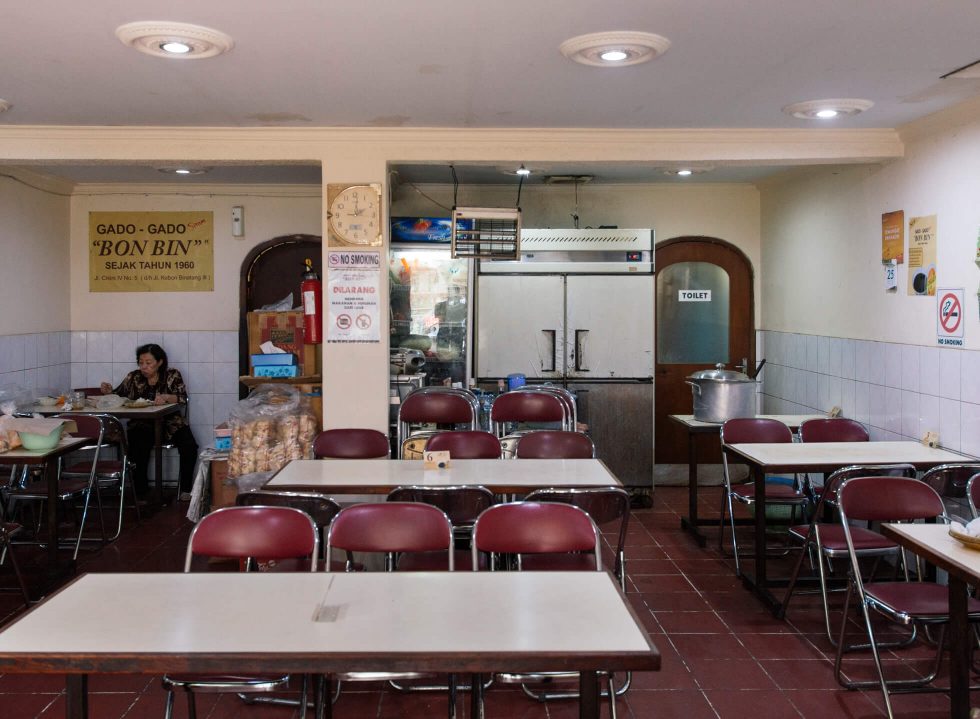 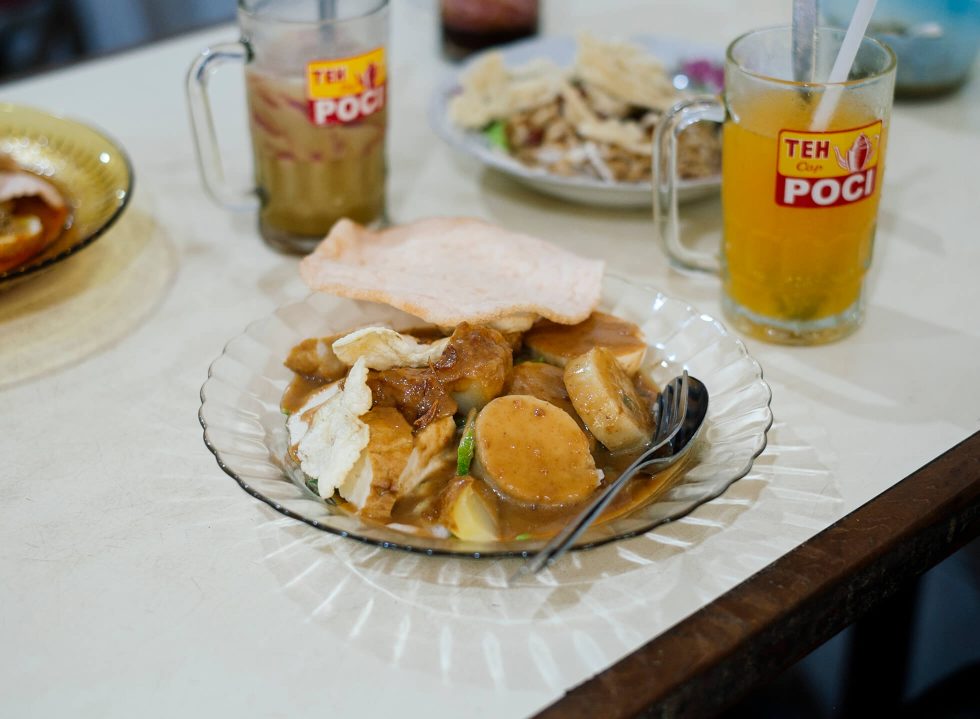 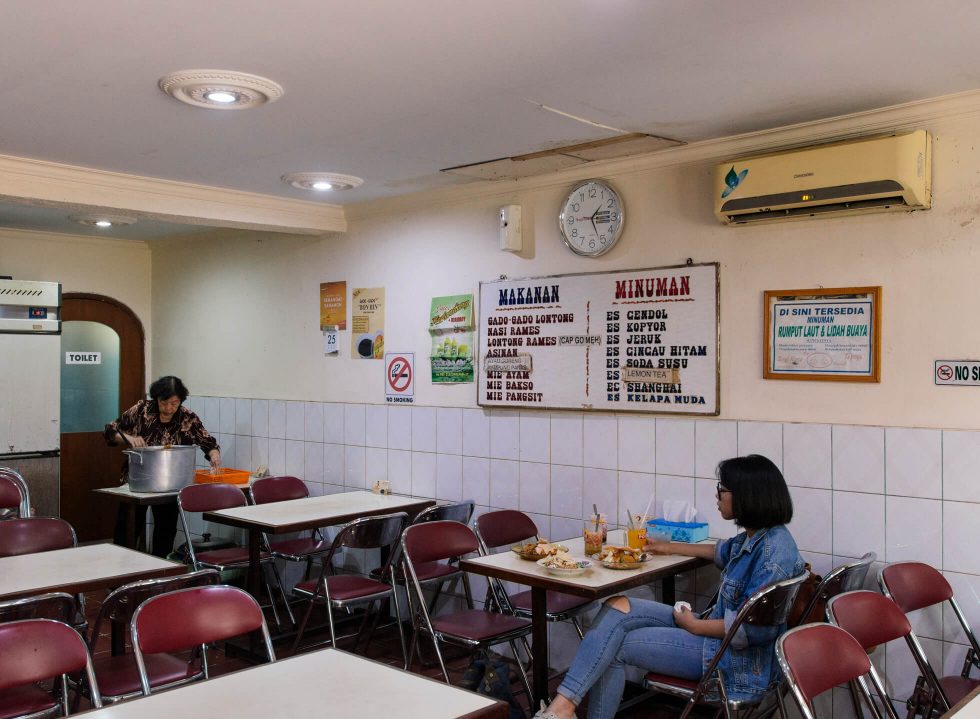 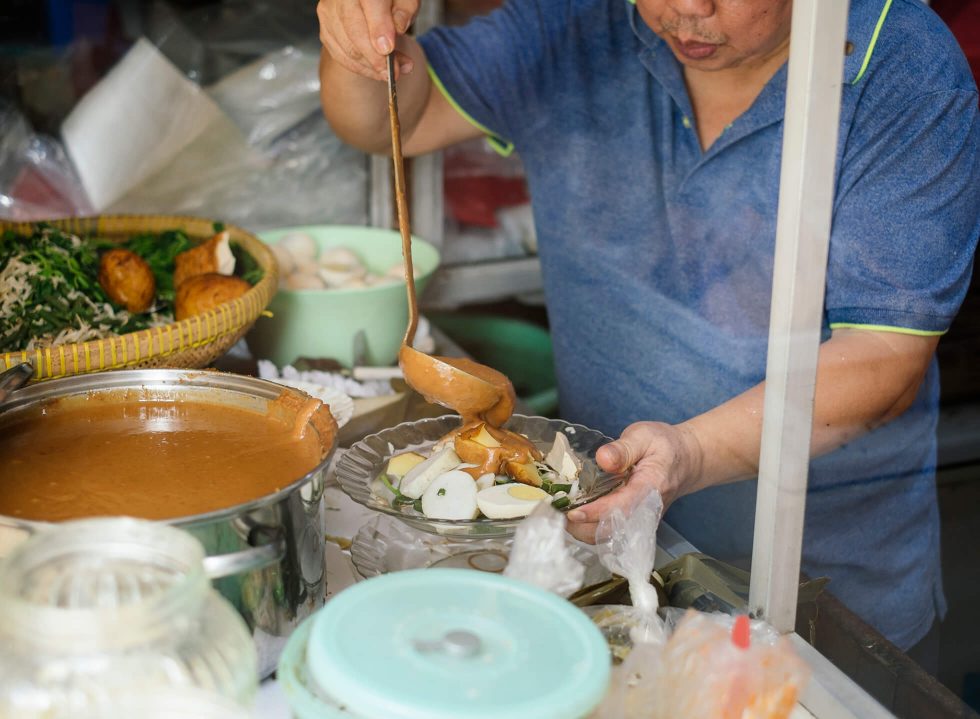 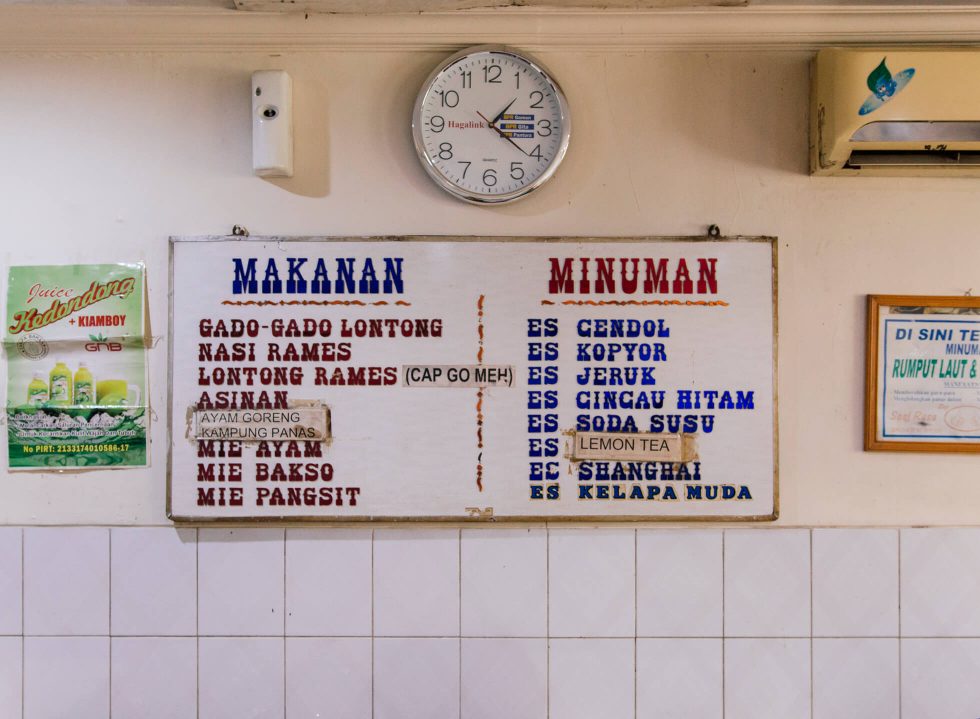 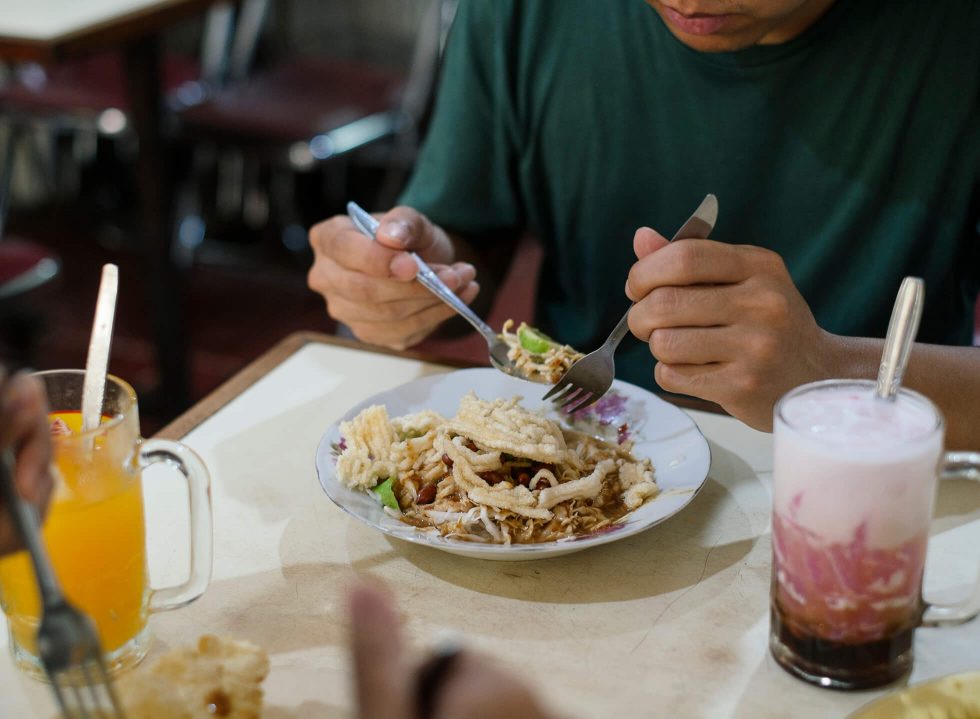 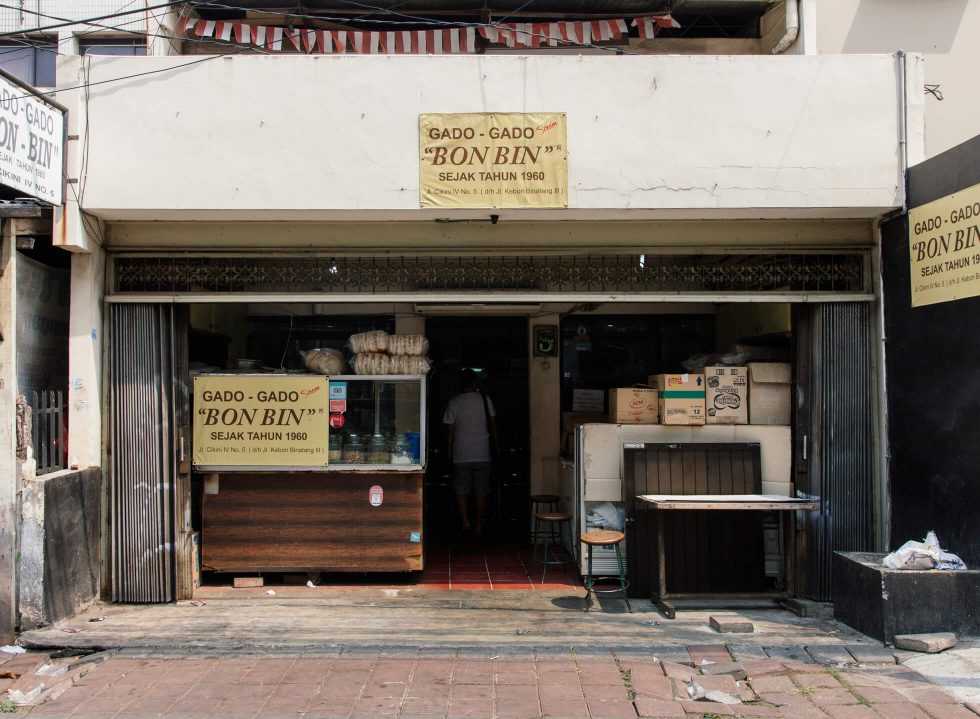 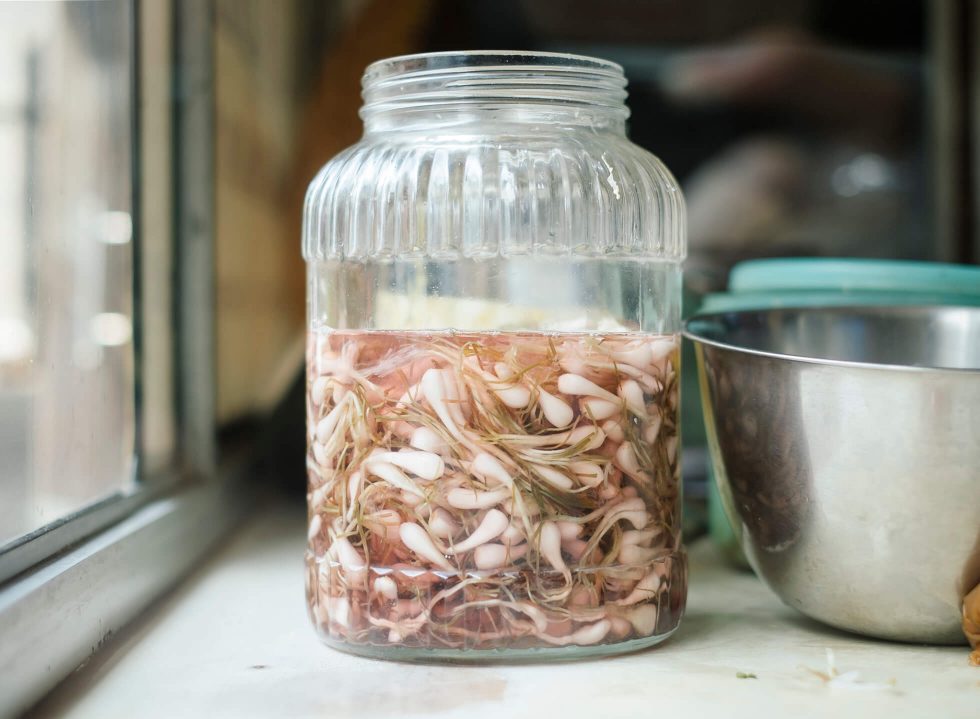 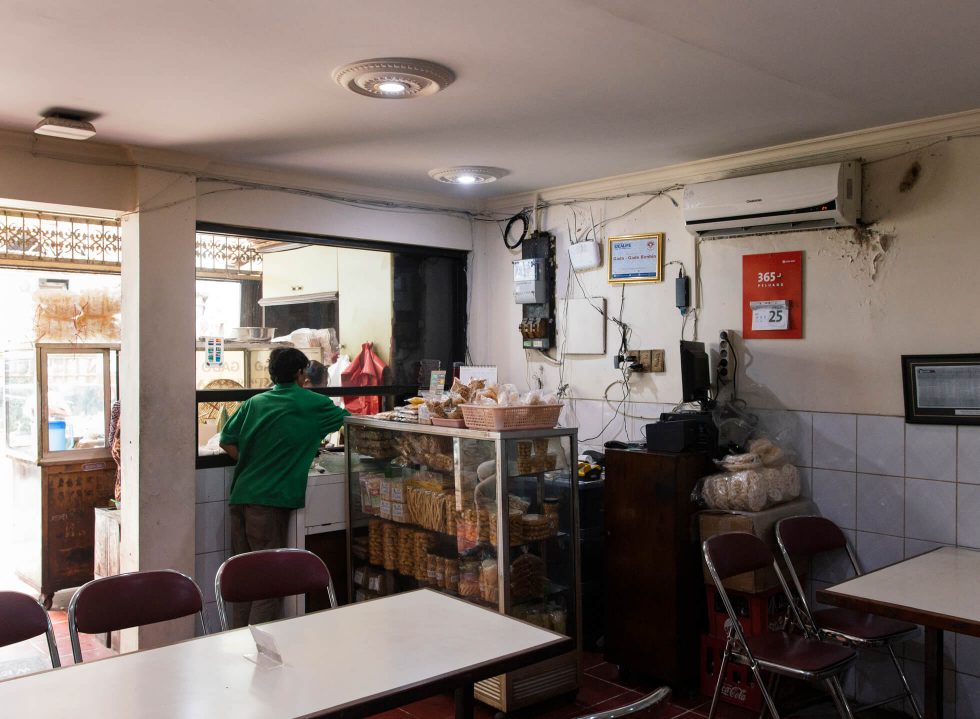 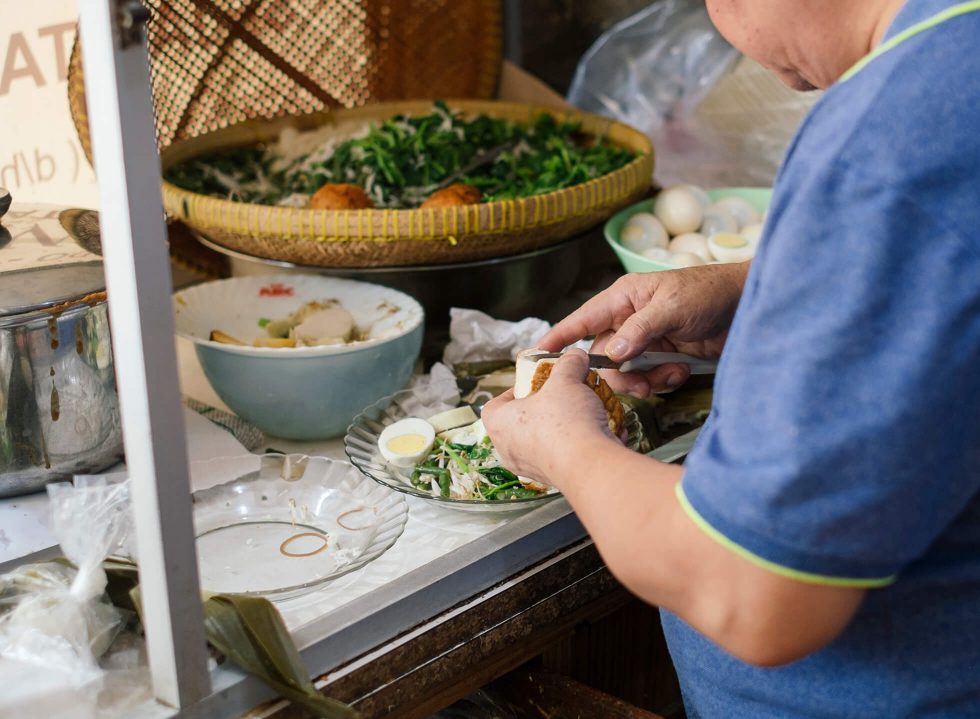 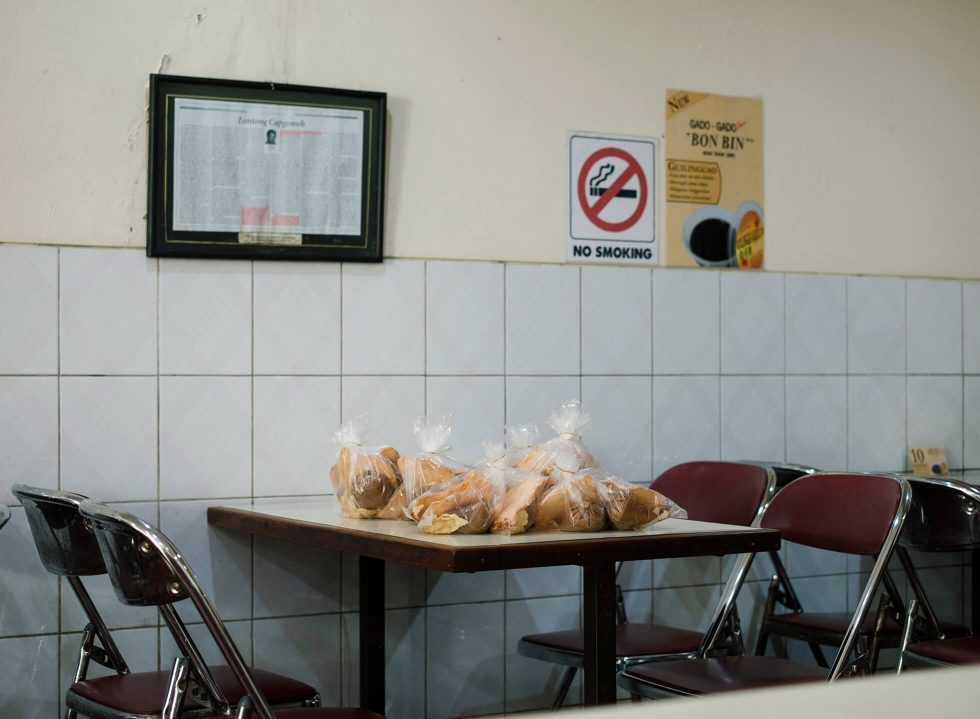 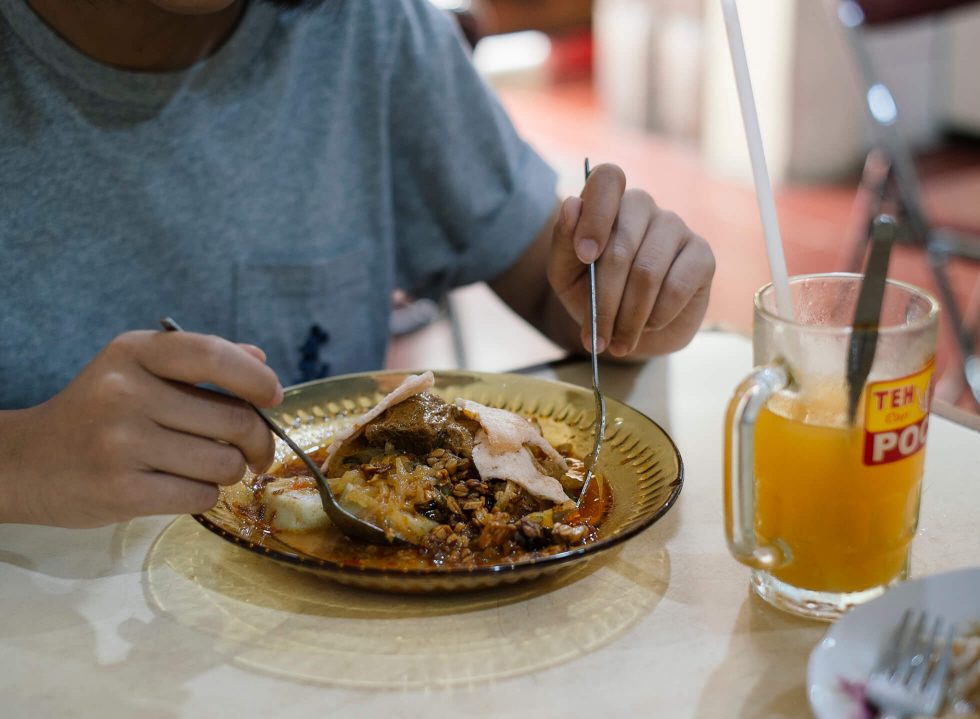 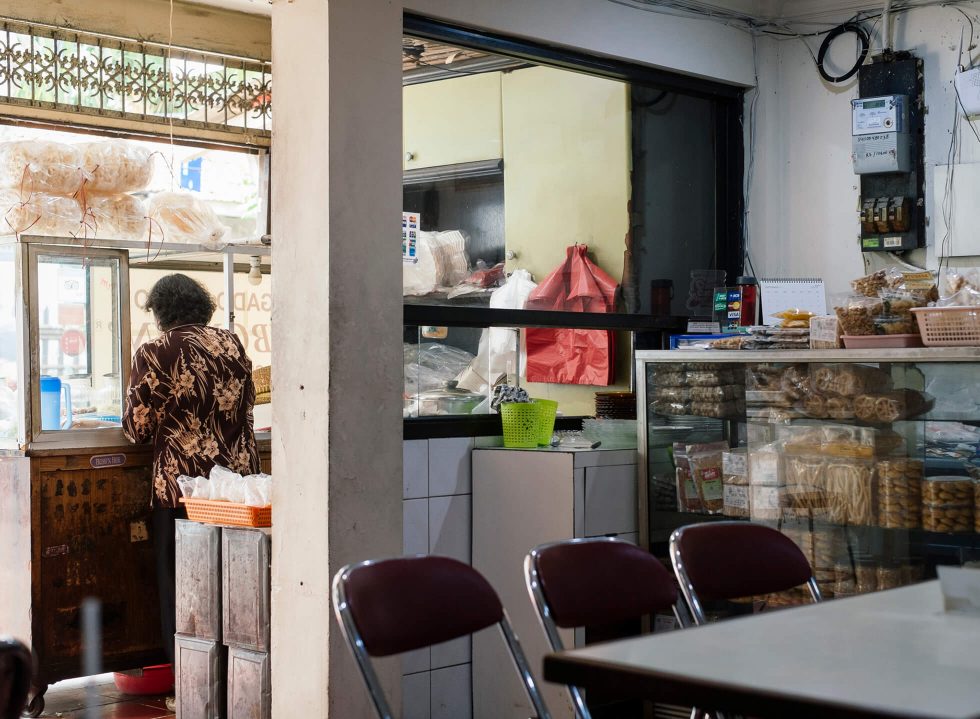 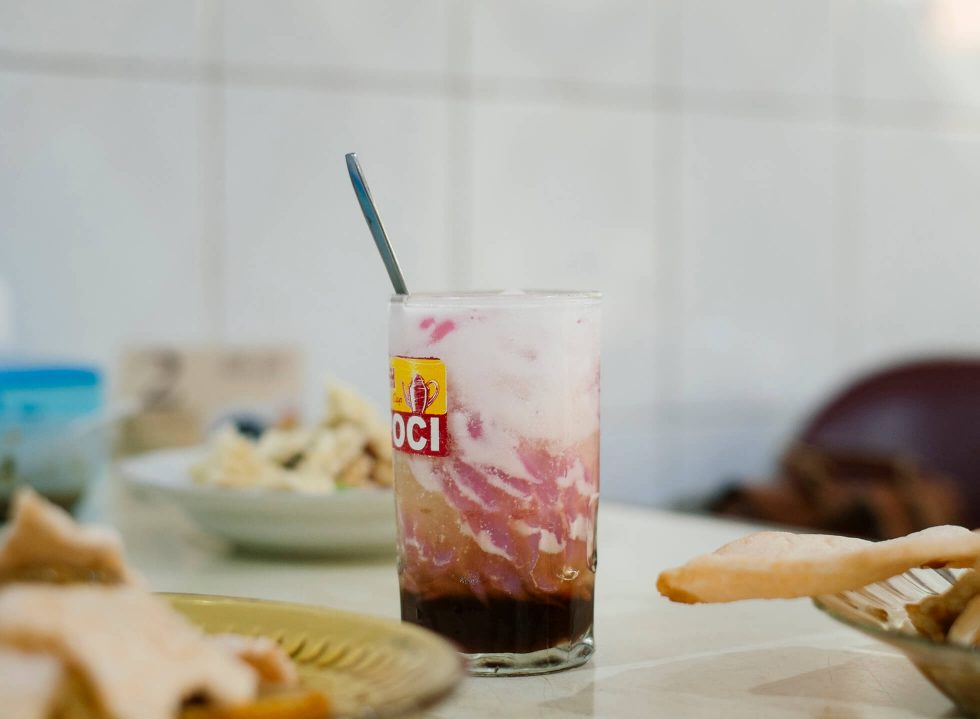 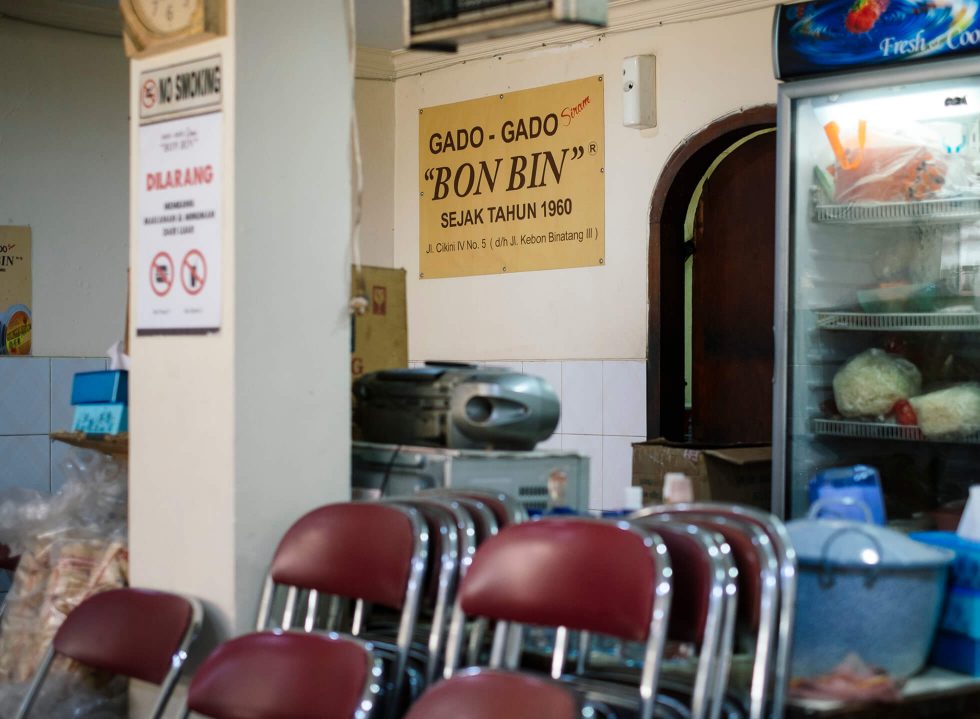 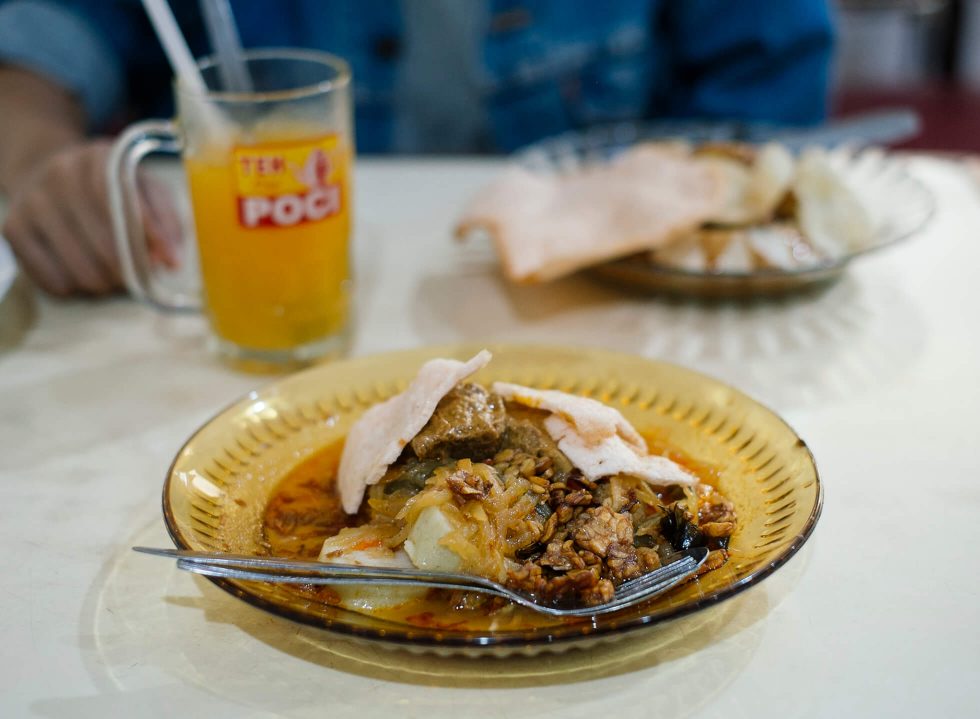 Speak of a Jakartan street food staple, and most can’t escape the image of a plateful of gado-gado sold by hawkers from their pushcarts. It’s a dish which introduction would be redundant, but shall you need it: gado-gado is a salad medley of veggies and soy-based proteins mixed with the unmistakably Indonesian peanut sauce dressing. Loved for any meal of the day, it’d be hard to not find it sold at each turn of a street.

Gado-Gado Bon Bin is a familiar name to Cikini residents, for it stood for the first time in the same modest eatery that you see today. Bon Bin stands for Kebon Binatang, for the eatery stood next to Jakarta’s first ever zoo before its relocation to Ragunan. Since 1960, the family-owned restaurant has made its presence known by serving its signature gado-gado siram.

Unlike the usual gado-gado where the peanut sauce is mashed and mixed on the stone mortar (ulekan), Bon Bin’s peanut dressing is distinctly theirs: instead of chunky and creamy, the sauce is prided for its smooth and liquid-y texture, thus they serve it by pouring (siram) it over the salad. Savoury and faintly acidic, this gado-gado is distinctly Bon Bin’s flavour.

But there are other options beside gado-gado as well. One, don’t skip on their Lontong Cap Go Meh (an Opor Ayam-based dish with rice cakes, veggie stew and marinated hard-boiled egg) or Asinan (Indonesian pickled salad) similarly drenched in the peanut sauce. And lastly, one can only marry this fare with Bon Bin’s own unique pink Es Cendol.

The place’s snoozy mood may overthrow you from the actual buzz that the eatery receives. Slow as it may seem, the owner, Oma Lanny, is constantly on her feet, moving around between the store front and the back-kitchen as she preps food for the day. While less diners frequent the place and opt to have their lunch delivered, it won’t be such a bad idea to make a quick stop just to feel the nostalgia that emanates within these walls.